You're in the middle of the woods, with a cache of varying weapons. Survive as long as you can before you are bear food. Last long enough, and you may make a 22nd century drop!

Thanks for voting and helping Bear Survival on it's quest to become the 2022 Indie of the Year. You are now in with a chance to score some free games. Help this game secure more votes by embedding the widget (or link) we have included below on your favorite sites.

Bear Survival V2.0 is in the works. What's in store for you? Let's look.

This will be our biggest patch release yet, coming with a price, however. The game will be released at 1.50 (USD) as it is consuming much time for us as developers and a little support financially would help. All our products are free, no doubt. You can still get V1.2 for free as well as our other titles. V2 will have a public demo to test it to see if you like it.

We know, however, games change. When our game becomes less popular, it will be free to everyone, and vice versa as it gets popular. So don't expect this to be set, we understand how gamers are.

There is no set release date, but expect it late this month or early next month! A trailer will be released along side the game.

Thanks everyone for their continued support of our games.

With the new version of Bear Survival out, we ask all our players to update!

there should be more games with flying bears

I love how the bears don't have any animations

GET EATMYDICTION TO PLAY THIS

This game is funny as hell, flying bears everywhere. ^^
I like this concept, can be a really good game.
I cannot imagine what the other enemies were.. ammo boxes eat you, some slabs with eyes.. pure awsome. 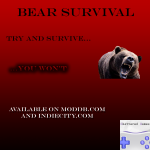