Against the Storm is a roguelite city builder set in a fantasy world where it never stops raining. You are the Queen's viceroy - a pioneer sent into the wilds to establish and manage new settlements inhabited by beavers, lizards, and humans.

Your goal is to survive long enough and gather the valuable resources necessary to rebuild and upgrade the Smouldering City. It's the only safe haven against the Blightstorm - a vile cycle of destruction ravaging everything in its path. Do you have what it takes to weather the storm?

You are a viceroy - the Queen's official sent on her behalf into the uncharted wilds to lead and manage a growing population of beavers, humans, and lizardfolk. Balance their varying needs, ranging from housing and culinary preferences to luxuries and fun. The harsh weather conditions pose different challenges on each biome you colonize. Manufacturing raincoats turns out to be insufficient when the oppressive hostility of the forest can only be soothed by boosting morale in the tavern.

With dozens of gameplay-modifying perks and choices you make, you will never play the same game twice. Adjust your strategy to changing weather conditions and experiment with the settlement “builds” - rosters of building blueprints and perks that can make your society thrive or bring it to ruins. But viceroys never surrender. You never know what wares the Trader will bring next year. Discovering a new building on a glade may tip the scales of your city's survival.

Notably, you are never able to construct all the buildings you need or want. The architecture of your settlement is influenced by your choices and what you find on procedurally generated glades that you uncover by exploring the woods. Gathering Camps collect different overlapping resources and each workshop produces goods from a wide array of changeable ingredients. Replace ordinary production chains with a large network of dependencies and substitutes.

BUILD AN ENDLESS NUMBER OF CITIES

Laying the foundations for a new city is one of the most exciting feelings you can experience in city builder games. In Against the Storm, you're tasked with continuously setting up new settlements which provide the Scorched Queen with valuable resources necessary to rebuild the Smouldering City. A single game takes around two hours, but rebuilding your Citadel requires multiple successful settlement runs.

Build an endless number of cities instead of one endless city. They are never abandoned. They become self-reliant. 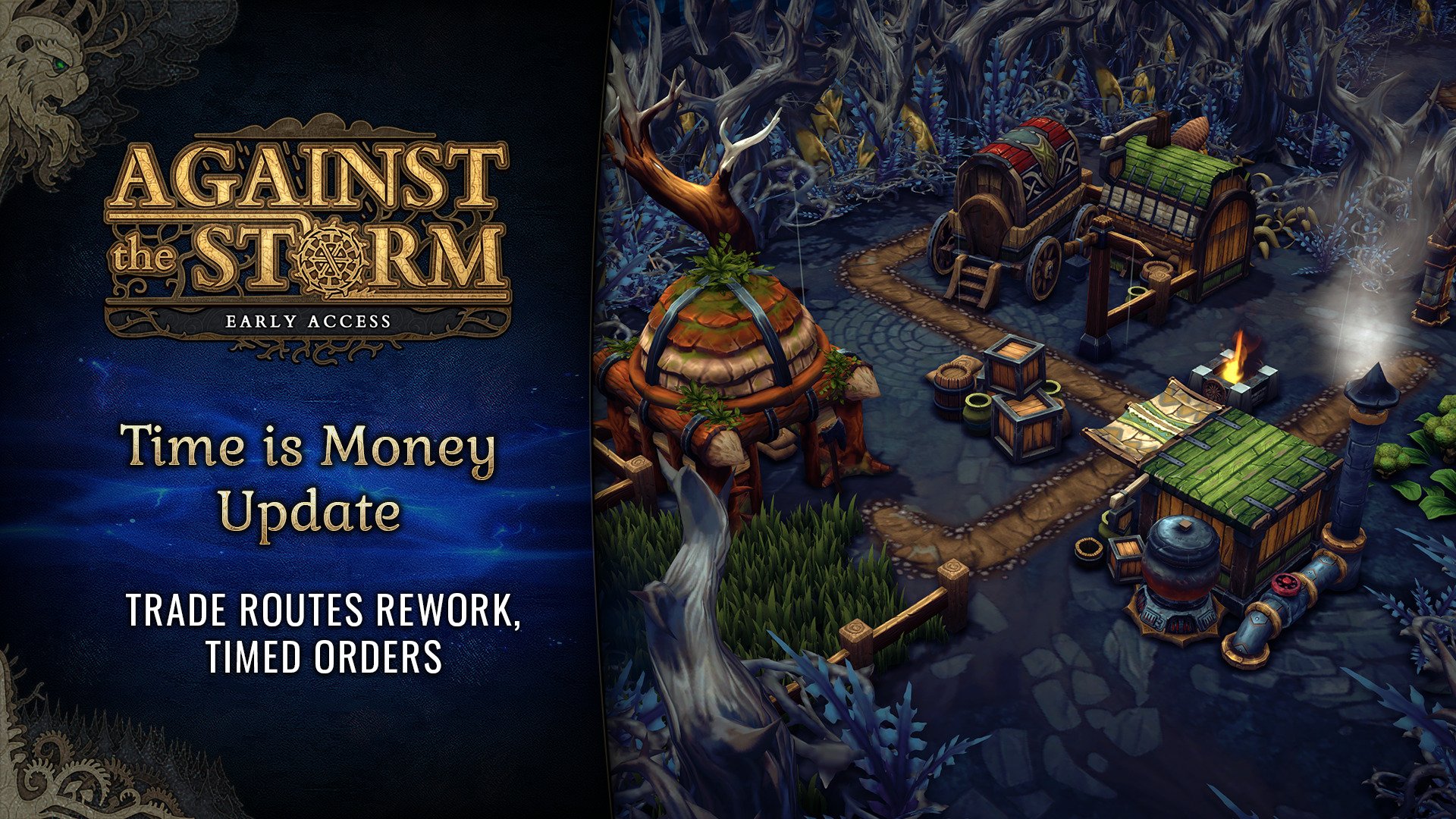 Listen, there's no time to explain! Download the new update and enjoy these new features:

Hey, I know you haven't downloaded it yet. The clock is ticking!

Also, Against the Storm is now on sale and you can get it with up to 36% discount.

We're nearing the end of the Phase of the Citadel, which means there are only a few more meta systems left to revamp - Trade Routes, Factions, and the World Map. We're still not ready to release the new Map, and Factions are still a work in progress, so with today's update, we bring you a new and improved Trade Route system. But that's not all! We also have an exciting new mechanic for you - Timed Orders! 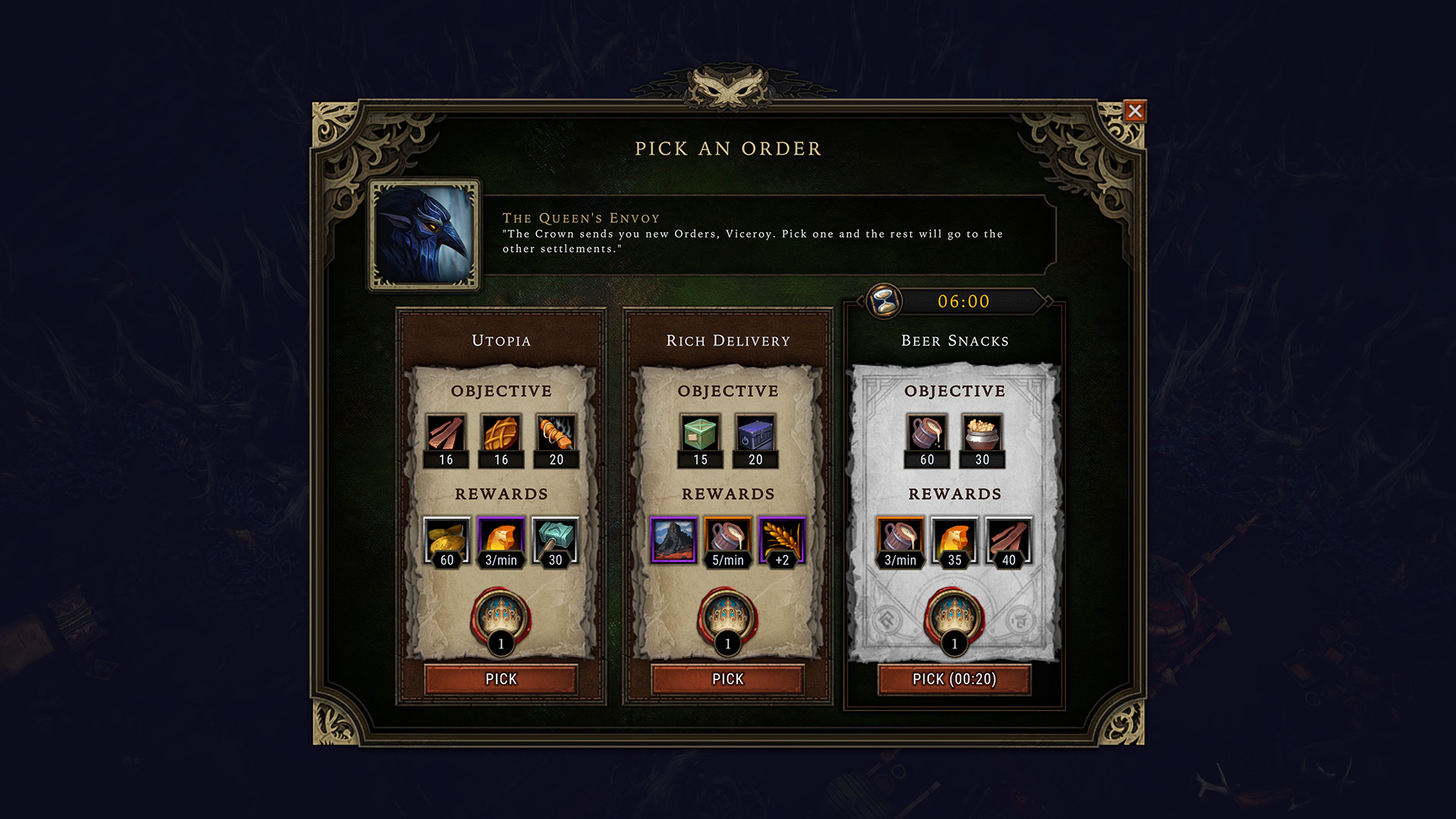 Let's start with Timed Orders - they are a new type of optional challenge you can take on in place of regular Orders. Timed Orders are difficult, time-sensitive, and very rewarding, but they can also be failed. Once the timer runs out, you will forever lose that one Reputation Point you would otherwise get by completing the Order. Our goal when creating this system was to give players a sense of excitement and provoke a more rushed, reckless type of gameplay. Additionally, we felt like the game needed a bit more opportunities to take on big risks and be rewarded for it. It's a rogue-lite after all. 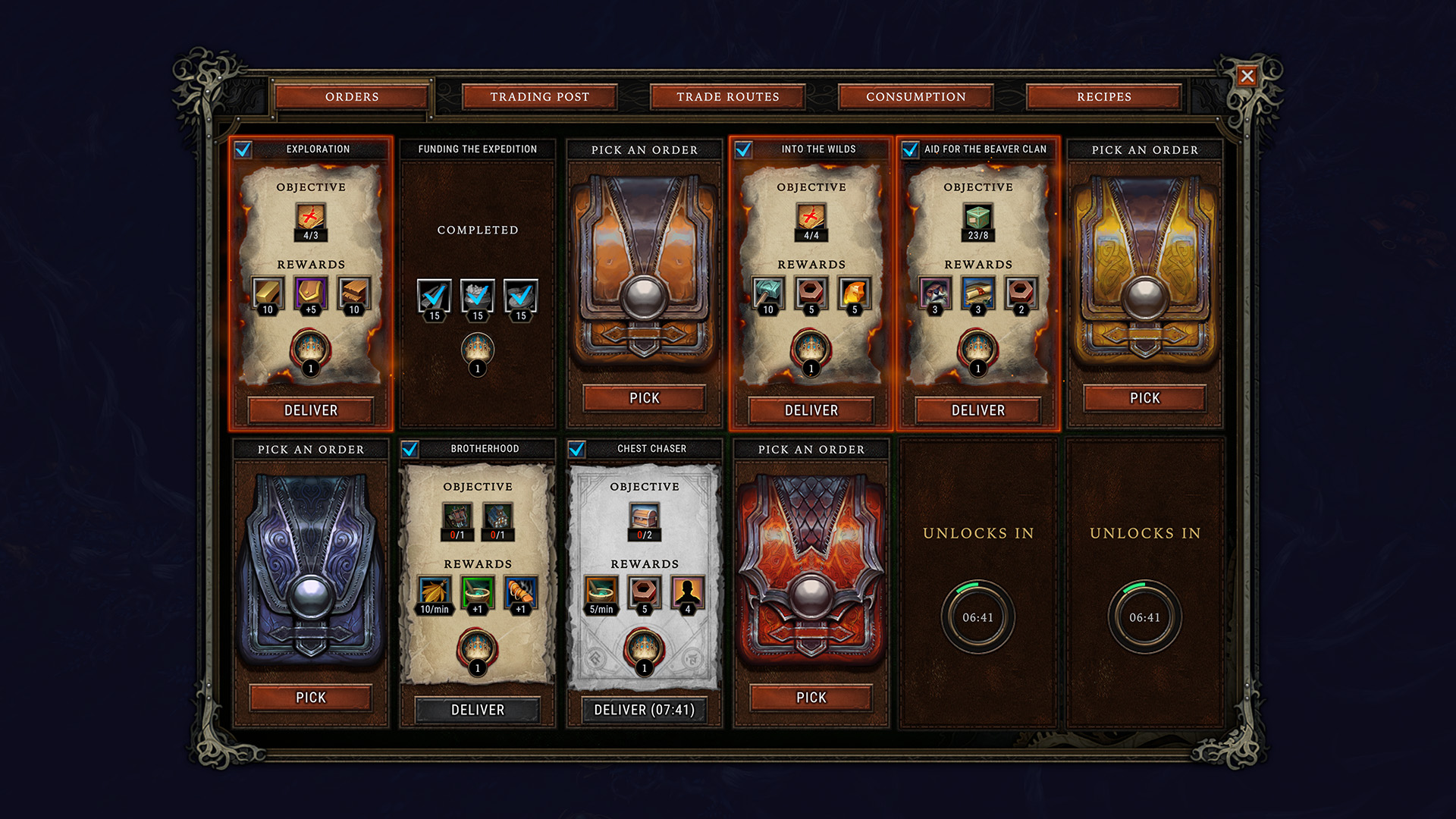 The second big addition coming in this update is the Trade Route revamp. We wanted to give the entire system more meaning, while also answering some of the most prevalent pieces of feedback we have gotten over the last few months. We came up with a new approach, which can simply be described as an export system with an additional layer of building relationships with nearby settlements. 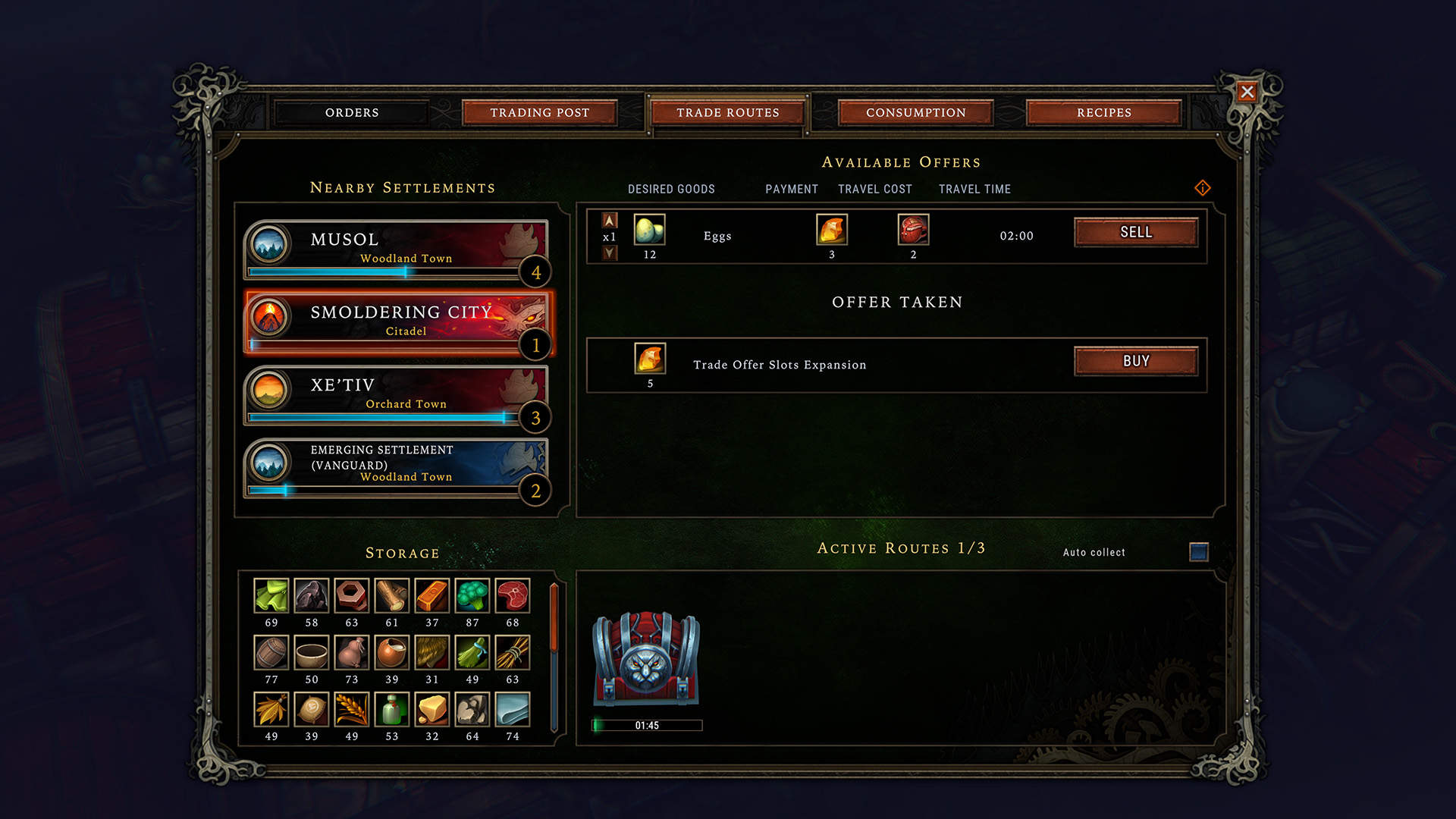 From now on, Trade Routes will take the form of Offers - requests for different goods from your neighbors. By filling these requests, you will earn Amber and increase your Standing level with a given town. The higher your Standing, the better Offers you will get in the future. At the same time, these interactions are not instantaneous - the traded goods need time to be transported, and you need to equip the caravan with enough provisions (Packs of Provisions). All Offers are procedurally generated, with different prices, durations, and fees, so it's up to you to keep a cool head and find the most profitable deals out there.

At this point, we'd like to thank all of you who tested the new Trade Route system on the Experimental Branch last week. We've gotten some incredible feedback which helped a lot in improving this feature before today's update. 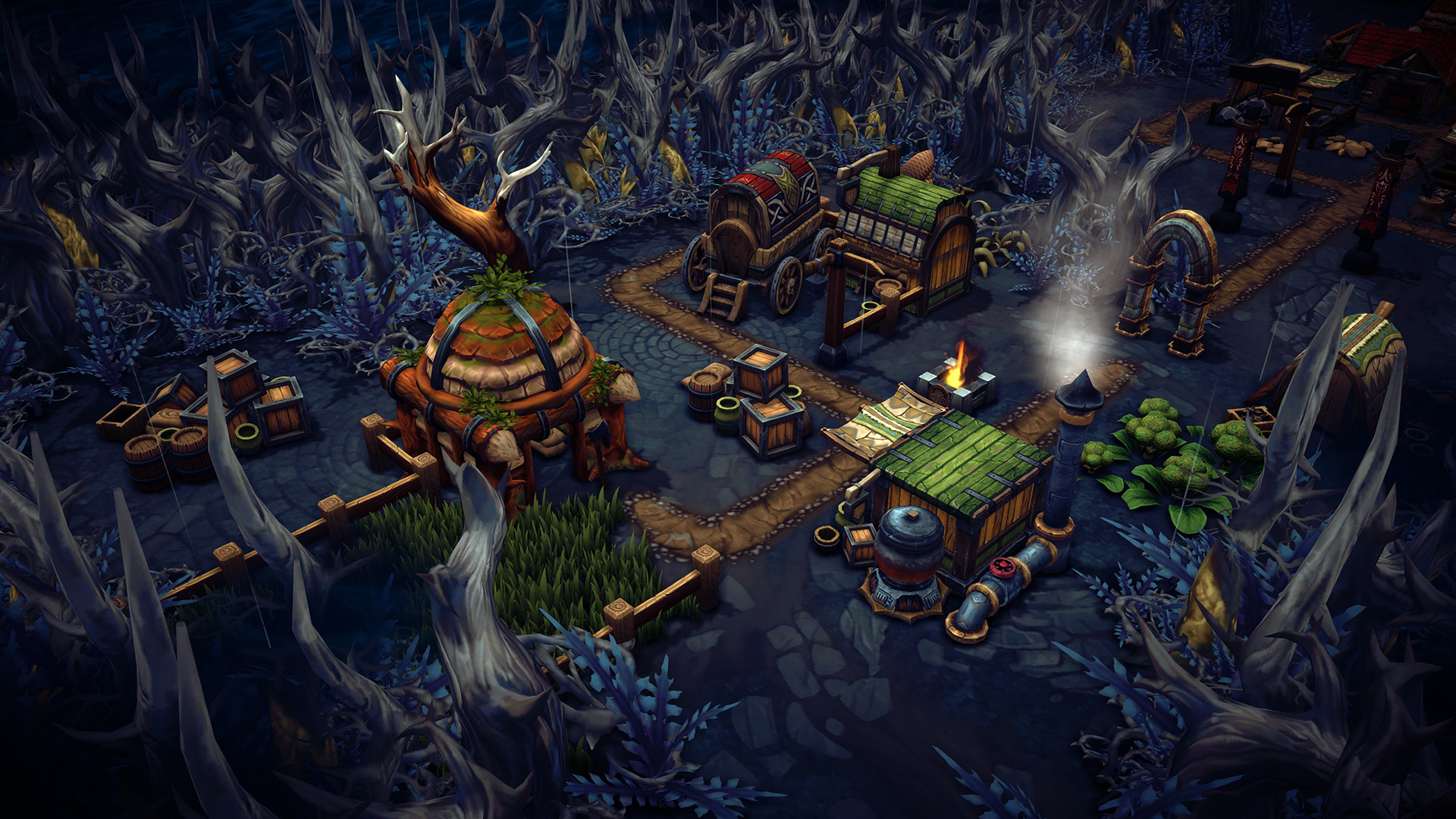 Lastly - we also introduced some balance changes in this update. This time we focused a bit more on Cornerstones, removing some that were too disruptive to the game's economy, and rebalancing a few based on the changes introduced with the new Trade Route system. We also moved some Order rewards around, so they would feel more balanced and in-tune with the amount of effort required. Additionally, we reduced the value of all goods in the game and traders will now pay less for the things you sell them. This was done for two reasons - firstly, we wanted to discourage players from mass-producing one resource and selling it all in exchange for the trader's entire stock, and secondly, we wanted to boost Trade Routes a bit, as a more profitable way of exporting resources for Amber.

We hope you enjoy the new additions to Against the Storm. Have a great time taking on Timed Orders and trying to swindle your neighbors out of their hard-earned Amber, and as always - feel free to share your feedback on our Discord server or using the official feedback tool.

Gain full control over what is being consumed in your settlement, and experience the improved and embellished UI.

Face over 60 new challenges and earn exciting rewards with the newest update to the Deeds system.

In the THIRTEENTH Early Access Update, we undertake an enormous effort to prove that number 13 is not as bad as it seems. We also tackle a similarly broad...

Discover 18 new levels of challenge and sacrifice meta resources for perks in the new Prestige Update.

Twitter
Tags
Embed Buttons
Link to Against the Storm by selecting a button and using the embed code provided more...