All the latest progress on our upcoming post-apocalyptic town-building game.

This month has been hectic but productive so this will be a longer than usual entry. Adam, our new programmer, continues to fit in nicely and a lot of new features have gone in with all 4 of us contributing as much as humanly possible with day jobs and families to distract us.

November has been the first month we've been able to sit down and play the basic city-building aspects of the game without missing features, which gave me one of those “we might actually pull this off” kind of feelings.

New Feature: Wandering Tribe
​
We’ve almost finished implementing the first aspects of the game now. At the start, you’ll be dumped, with a group of survivors, into an unknown part of the map. You must choose one of the ruins to make your first Storehouse out of, and that will become your city centre. You lead your people across the wasteland, before they all die. It's cool watching them trail behind you until you’ve found a place to build.

We’ve also given them a little more life, so they don’t just stand around like zombies when unemployed. 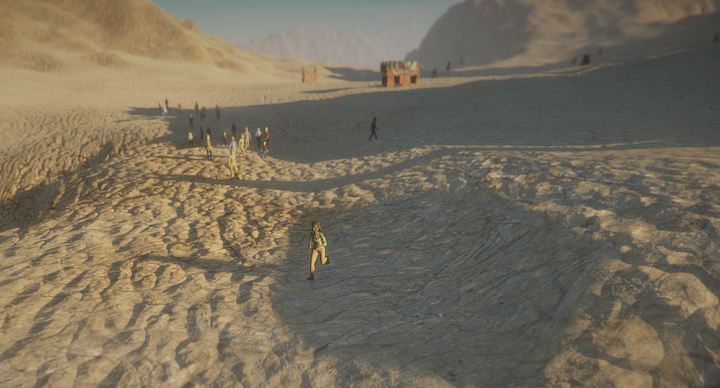 We finished implementing the 5 core needs every citizen has: Food, Drink, Health, Shelter and Morale. This alone has been a HUGE task and great progress for us.

The needs are now all fully functional and citizens refill them by visiting the right structures, so that almost constitutes gameplay! Along the way we had to solve some unexpected problems, like what happens when all your medical staff get sick and can’t work? Sooner or later everybody would fall ill. Found a solution in the end though.

The Health need became more advanced too. Citizens now have a chance to become unwell or injured. It makes the game less manic and more realistic.

This month we were also able to finish off a cool feature that makes the citizens and survivors who come to your town a lot more varied. They now all have multiple skin colours, hairstyles, body shapes, age ranges and of course, gender. It should be pretty rare to find two citizens who look exactly identical. 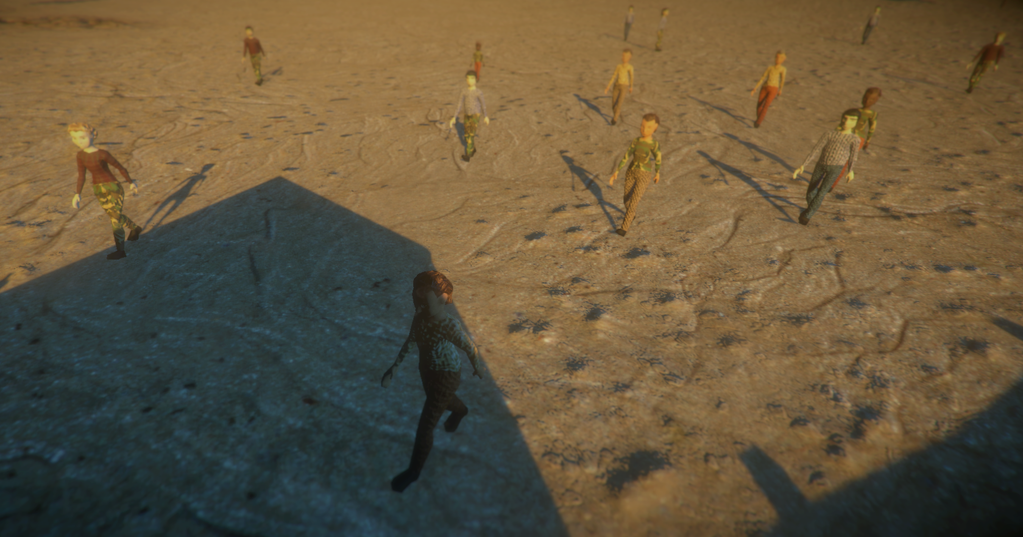 The Idiot's Guide to Running an Indie Games Studio

One annoying tasks about making games is that it isn't all about making games. This month I decided to do some homework, dipping into the scary world of business studies tomes, and marketing guides for dummies. I’m not sure any of it has sunk in yet, but you’ll know if I learnt anything in about a year if we’re all sleeping under a bridge after the game's launch. Of course, I want Atomic Society to succeed somewhat, and for Far Road Games to prosper at least modestly over the coming years, but I feel the business/marketing side of this operation is always going to be out of my comfort zone. We'll see.

New Feature: Engineers
​
Another new feature added this month is the Engineers. Engineers are basically super-citizens. They’re good at everything, but they’re incredibly rare. At the start of the game, they’re the only people who can construct anything. As a player you’ll want to employ them in the right places, and hope nothing/no one kills them. The story of Atomic Society is that you were kicked out of a government outpost that survived the war, because you disagreed with the way it was being led. Now you’re off to make your own new society. You brought a handful of fellow Engineers with you.

Finding a Solid Design for the Buildings

Working on the needs forced me to re-evaluate what buildings we had in the game. I didn’t want it to be a case of just build X, Y, Z then repeat. So we’re using paper, scissor, stone style balancing. There are 3 buildings that can provide water, 3 for food, etc. Each of them has a plus and a downside, and you won't be able to afford to build them all immediately.

We turned this new balancing method into a set of programming scripts that can work on almost every basic building. This month alone at least 9 or 10 new buildings have become functional in-game due to this refinement.

As a designer, I've also discovered that every game needs a little randomness to be addictive, and it's down to the player to decide if they want to gamble for added reward or play it safe. Randomness is a powerful tool in the designer's handbook.

Likewise, I have started to appreciate the importance of honing a core "gameplay loop". This was a term I wasn't particularly worried about, but now I appreciate it as a way of honing the design to perfection. Everything feeds into everything else in a game design. Everything in Atomic Society is now about keeping up your Approval. You build new structures to keep it up, but that attracts new survivors, who come with new demands (and social issues), that drive down approval. Every time your city will get more and more wild and big. Everything has come together now and the game feels a lot neater in my head.

This month I finished the second pass on all the environments, armed with the knowledge learnt last month. They still need a third and fourth pass no doubt, but we’re down to the polishing stages. All 9 levels now look presentable and interesting to explore at least.

Other New Stuff This Month

Next month I hope we’ll start to see the first evidence of Atomic Society's truly unique aspect, its society and law-making aspects. We're getting so close at last! Everything else has been building up to that (no pun intended). The city-building aspects are vital, and fun thanks to their post-apocalyptic twist, but I can't wait to see our citizens truly come to life in all kinds of dark, exciting ways.

Feels like we’re really getting close to having this basic alpha version in our hands. Here’s hoping we can maintain progress over Christmas...

​See you in about a month.

Thats quite a nice project you started there. The setting is very interesting and the graphics are really nice. Reminds me of Banished a little bit.
Having a day job is not the best prerequisite for such a project but you are doing quite well.
I wish you having nice progress in December!

Thanks for the support. Day jobs do indeed suck! Glad you like the graphics (stared at this game too long!). Banished was definitely in our melting pot of inspiration. Just wanted to combine it with a fresh setting and law-making/moral choice gameplay as well. :)

Oh yes, I forgot to comment on that law making. Does that mean, you as a player can define rules by which your people have to live? For example, if a new person arrives in the settlement, a rule could be that he is to be robbed and "converted" to meat? ;) Short: do you aim to simulate group dynamics (that would be very complex I guess...) or is it just a "cosmetic" touch, that you can whatch, what your people are doing?

There are lots of moral and ethical laws that the game simulates to a limited degree. E.g. one guy might be a cannibal. That's just his thing. He's gonna eat someone if they die, he can't help it. Others will dislike that. Some people will think it's cool/useful. You will have to choose what you believe on the issue. :)

So you can push him out of your community for keeping the aproval of the others? But on the other hand this may be his certain death and may not be considered as fair by other people...
Sounds very nice and new, I will follow the progress :)

I love it keep it up!

Good read. Succinct with a dash of dry humor, lovely. This project is really starting to shape up.