Midway through the first game in a series, I'm planning out an entire franchise with sequels. I swear I'm not a raving idiot. Hmm, but that's what a raving idiot would say.

The official title of the upcoming game I’m working on is “The Godkiller – Chapter 1”.

Built into the title is the implication that there’s going to be more of the game coming. It’s maybe a bit arrogant-sounding. Even George Lucas didn’t call the first Star Wars movie “Star Wars I” (“IV”?), despite him having the story for nine movies planned out in his head. He went with the simpler “Star Wars”.

Who is this clown comparing himself to George Lucas and laying out multi-year sequel plans?

Well, I’m releasing titles that are much smaller than multimillion dollar movies. I’ve made choices that don’t rely on outside funding or any kind of green-lighting. There is no publisher or studio for me to convince to fund a “chapter two”, and economically, I know how to keep going while putting out a title by being modest about its scope. Also, I’ve done the game franchise thing before. Below you can see titles from the DROD franchise that I created or contributed to. Though it must be said that Mike Rimer and the Caravel team were the main force here after the first three titles I released. 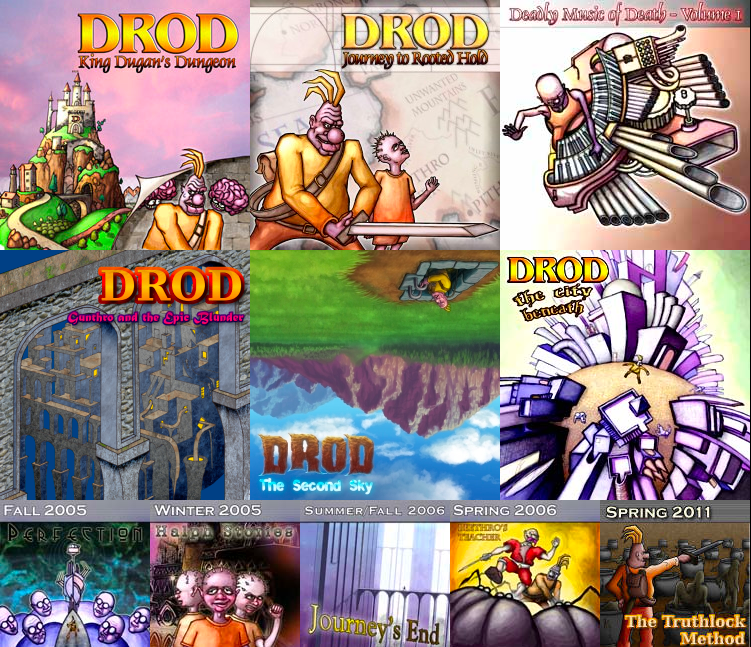 So developing a bunch of titles as part of a larger story is a practical undertaking for me. It follows successful patterns I’ve used before.

What Will Be In Chapter One?

Despite the DLC connotations of the name, Chapter One is a complete, self-contained game. I know from watching four puzzle experts play through it, that GK1 has got at least 20 hours of playtime in it. The story in Chapter 1 has its own smaller arc, with plot events leading to a satisfying ending. But Chapter 1 is also contributing to a larger story arc. Some events that will happen in later chapters are foreshadowed.

Unlike Stephen King, I’m not making up the long-arc story as I go along. There’s about thirty pages of high-level outlines. It’s stuff like:

…except that’s not an actual event from the outline – it’s a slightly faked example. I don’t want to spoil the story for you!

Although, I have the complete story outline done, I don’t yet know how many chapters there will be. Like Chapter 1, I want each chapter to end strong, and have its own story arc. One thing I learned on Chapter 1 is that the game elements end up affecting the story a lot!

So for example, I originally did not see much use for the pushable blocks in the game. I was a little fatigued of soko-ban blocks from playing so many games over the years that featured them. So the blocks were originally meant as props to represent a dreary form of slavery for a group of people. In their little society, they just pushed blocks around all day.

But then I found some tweaks on the blocks that warranted them being used in nearly every level within the game. At that point, I got very excited about pushable blocks! For an explanation of this, see Top 5 Reasons Why My Blocks Are Not Soko-ban Blocks. One section of the story blossomed as a result of the discovery of really fun game mechanics. And that placed the “cut” point between Chapter 1 and Chapter 2 much earlier.

The game affects the story, and there’s discovery during development. That’s why I don’t pull a George Lucas and plot out nine movies/chapters in advance.

The first game I released commercially was called “Deadly Rooms of Death”. Years later, I discovered I wanted to make a sequel, and the name didn’t work that well for a story-based game. E.g. “Deadlier Rooms of Death”? So I ended up abbreviating the name to a “DROD” prefix, and myself and others wrote games like DROD: King Dugan’s Dungeon, DROD: Journey to Rooted Hold, and more. If I had understood at the beginning that I wanted to tell a story, I would have given the game a better franchise name. I’ve never been a fan of abbreviations.

I like the literary feel of “chapter” – it helps communicate that this is a continuing, linear story. Similarly, I’m not inclined to use the “franchise name:title name” style, e.g. Fallout: New Vegas or DROD: The Second Sky. It might be a marketing mistake, but I like the message of each title being a well-planned part of a larger story.

Why not call it “The Godfatherkiller”? 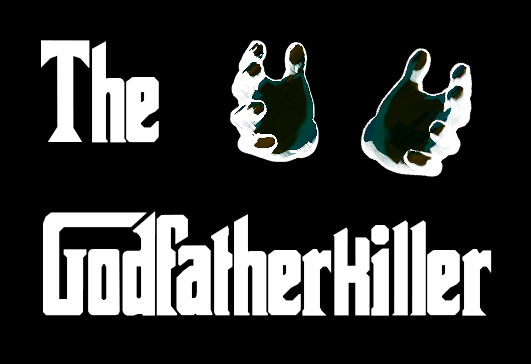 I don’t know. That would have been pretty cool.

The Release Strategy – One Game Each Year (Probably)

Though I’ve got some minor regrets over the “DROD” name, I don’t have any regrets over the way we released the games. We created a reliable game engine, built to last. We would update it with some new features and game elements on each release, and we’d create a bunch of new content in the form of levels, story, music, etc. The engine was maintained over two decades to release twelve titles on Windows, Mac, and Linux. There were no major rewrites or refactors to it. It was and remains a solid piece of software.

I’ll follow a similar release approach for The Godkiller. The engine I’ve written over the last three years is also built to last over multiple titles. It is Unity-based, which wouldn’t satisfy Jonathan Blow, but there’s a deliberate under-reliance on 3rd-party assets and Unity features that might not age well. Worst case, I’m sure I could port it out of Unity if I needed to. New titles beyond the first Chapter 1 should be something like 90% content, 10% engine updates. So whereas it will take me 3.5 years to release Chapter 1, a Chapter 2 should be do-able within a year.

I don’t have the roadmap confidence of a Marvel Studios, but my aim is to release one title per year. That seems like a realistic cadence based on my past experience and the amount of time I’ve logged on Chapter 1. Things can change or go really wrong. Maybe I go insane along the way and they lock me up in a padded room without any computer to write games on. But… I bet you Chapter 2 takes a year.

I’m not alone in this low-engine-update approach. If you’d like to get more into the business side of this release strategy, check out Jeff Vogel’s talk below. The guy released 24 titles in 24 years!

The Godkiller is a 3D puzzle-solving adventure game under development. It will release January 1st, 2022 on Steam for Windows and Mac. Wishlist today!