We are very close to the planned release of our game so I can finally write something about one of our biggest achievements - the opus magnum (at least one) of the Profundum project :)

We are very close to the planned release of our game so I can finally write something about one of our biggest achievements - the opus magnum (at least one) of the Profundum project :)
During the design process of new mechanics and game elements we came to the conclusion that our physics implementation of gears mechanics could power up some more sophisticated mechanism or vehicle. During the research we naturally found the kinetic sculptures by Theo Jansen, widely known as Strandbeest (see En.wikipedia.org , Strandbeest.com)

These fantastic creatures called from danish beach beasts are mostly powered by the wind but their true strength is in the way their legs work:

As you can see on the in above gifs this brilliant construction transmutes circulas movement of central element (using series of connected moving parts) to movement similar to horse trot:

This design was inspiration for numerous engineers and followers (https://www.youtube.com/watch?v=TzehmObSjAE) - you just need to google: strandbeest. It was also the perfect match for our steampunk universe and playing with gears, moving parts, steam machines etc.

We started from simple model of single leg acknowledging (quite rightly), that other legs will just have cloned mechanism. First step was to build the model in Blender taking into account all necessary but simplified moving parts and suggested dimensions and proportions (https://www.google.com/search?q=strandbeest+measures): 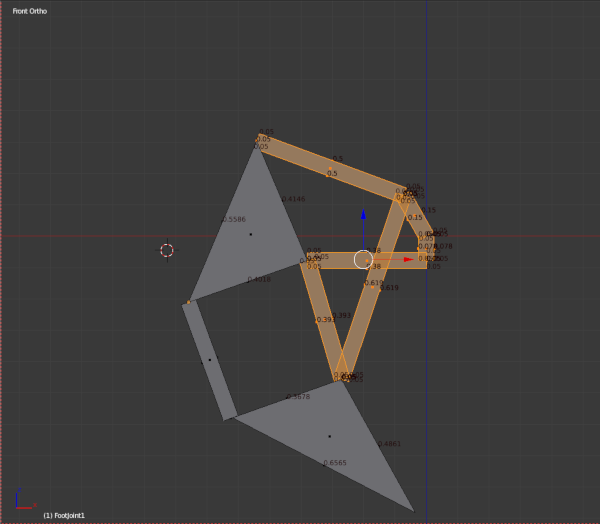 After some battling with setting up all the pieces and connecting the joints properly (some needed to be fixed to the mech “body”, others should be simple hingejoints and the centre one should be hingejoint with enabled motor to propel entire mechanism) we came to the point where we could clone one leg setup and get first walking version of our mechanical beast.

Finally after some more tweaking we've built this stable version that we could control using keyboard and also test it in VR:

This is where we stopped working on mechanics of our creature and gave all measures and screenshots to our concept artist to do a steampunk makeover for our beast. This resulted in this great concept:

Next the concept art naturally landed on our 3D artist desk, who carved final model using it. Our main programmer, responsible for putting the entire machine in motion, watched him during the entire modeling process so that all moving parts have right proportions, didn’t overlap in strange places and their movement looked good.

Again we started from the legs which movement was most important part of the entire machine. The perfect matching of moving parts between the visions of concept artist-3d artist-programmer was quite dificult and turbulent, but everyone had the same goal - to see the beast in motion and in full glory. After many, many tweaks in the design, dimensions and placement of moving parts we finally got to the point where our machine could move.

[small hint to everyone who wants to export moving machine from 3D modelling app like Blender to Unity: ask your 3d artist to put Empty objects in critical points between two moving parts and export them accordingly.]

3d modelling timelapse of our mecha:

We also built a virtual playground for our beast and we put it in series of tortures... I mean tests:

Meanwhile we also added two control sticks for steering both left and right set of legs separately, so player could freely maneuver.

One more very satisfying gif - I don’t know why:

And last but not least - our model came back to our concept artist, who also is our texture painter. She learned and used Substance Painter to paint our mech so it could finally be used in the game.

I just can’t wait for you guys to sit inside this mech and ride yourself through entire level - one of many others full of surprises and mechanics.

At the end I want to stress that entire machine works on game physics - nothing is precalculated or prerendered earlier as animation. Additionally entire mech is powered by mechanism inside the cockpit that player needs to complete taking into account stuff like moving forward and backward. Obviously we don’t want to show that to not spoil you guys the fun of completing this puzzle for yourself.

Remember you can already add the game to your steam wishlist - here’s short link: Bit.ly