Post feature RSS I created this game with only 4 tools

I detail the tools I used to create Whitevale Defender.

I know there are some tech nerds out there that are interested in the tools I used to create Whitevale Defender. It's really not that complicated though. It's really only 4 tools.

Since I'm going for a retro look and feel with Whitevale Defender, I really wanted a tool that would suite my needs. Sure I could have used GIMP or Photoshop, they would have gotten the job done, but they really weren't designed for pixel art. They would have been way overkill. I wanted a tool that was designed from the ground up to be used for pixel art. Which is why I was really happy when I stumbled upon Pyxel Edit. 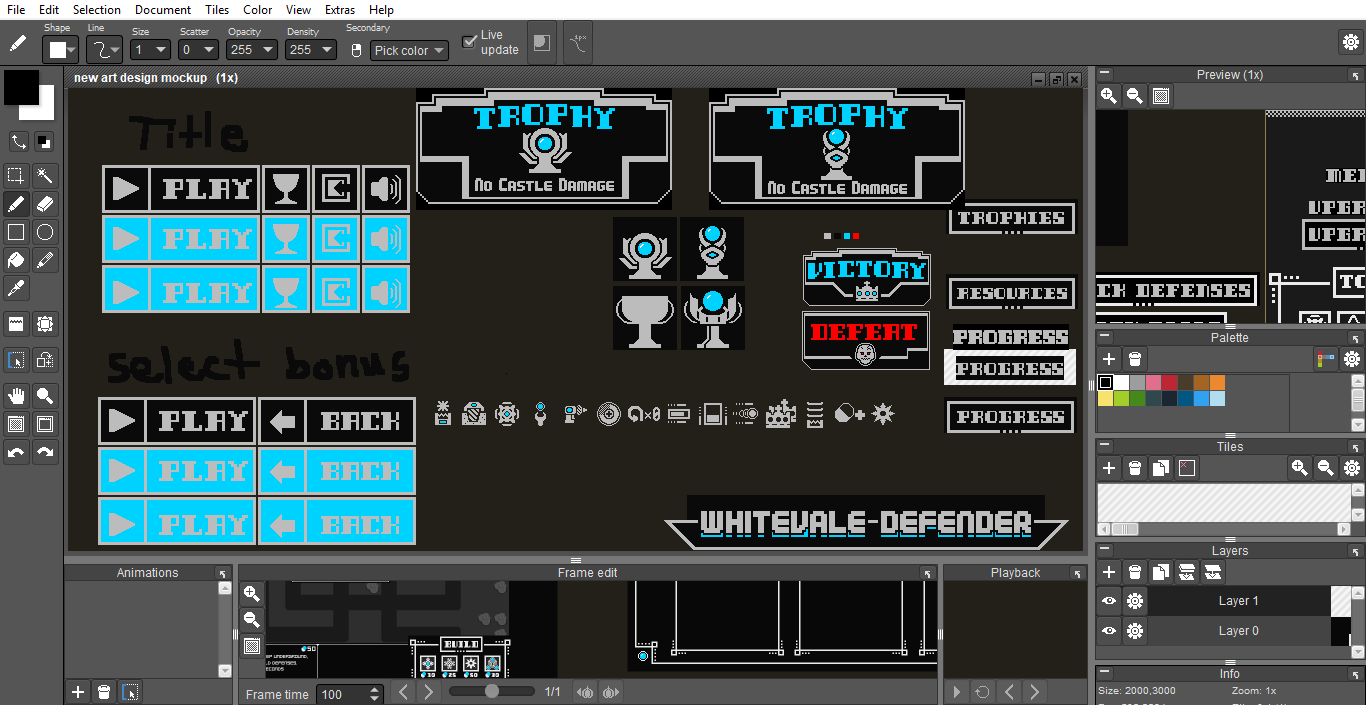 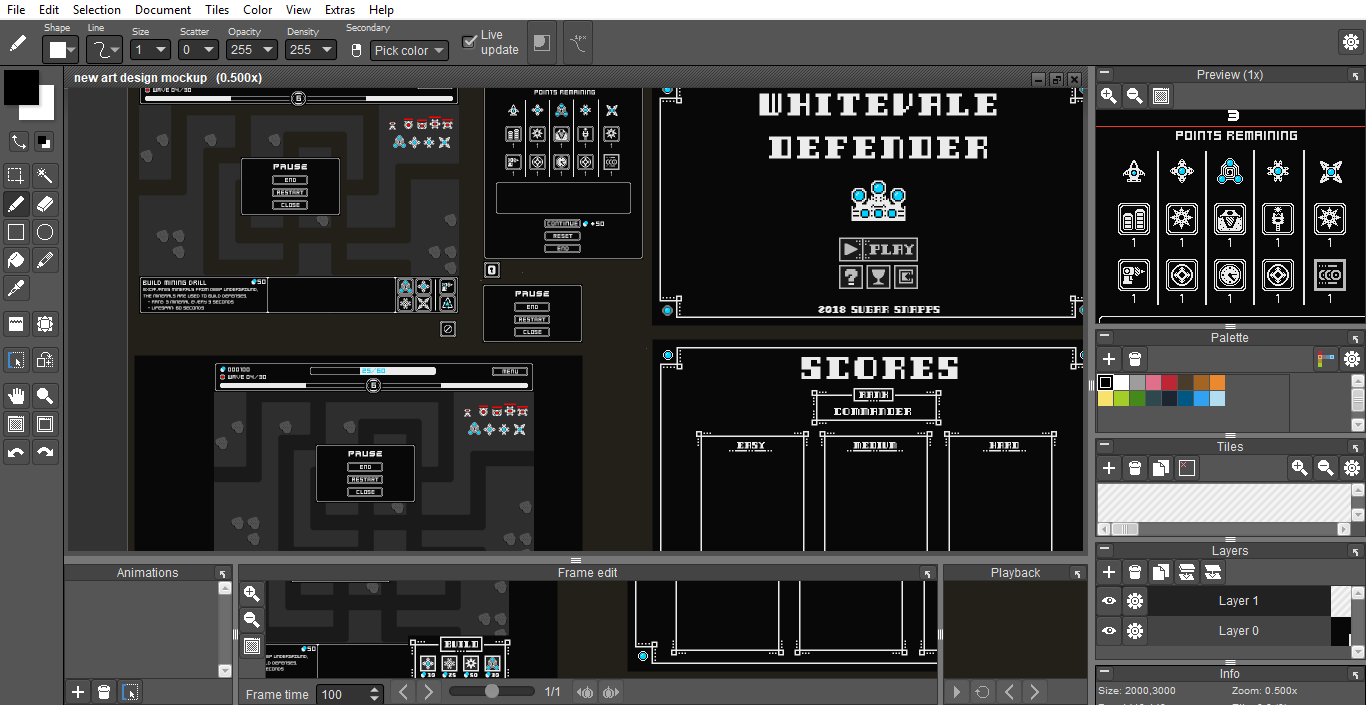 I basically used Pyxel Edit like a sand box that I could mock up the final art. I created a canvas of size 2000px by 3000px to work in. Once I finished the game as a prototype (with really simple art), I took a screen shot of it, pasted into Pyxel Edit, and started drawing over it. I focused on one element at a time, such as the HUD, then the paths, then rocks, etc. Once I was happy with the mockup, I cropped out each element individually and copy/pasted it right into the game engine.

For the animation I did a very similiar process, except I took it one step further. Once I cropped out the individual element to animate, I created a new Pyxel Edit project specific for the animation, then copy/pasted it into the new project. That way I could focus on the animation without getting bothered with the mess of the mockups. 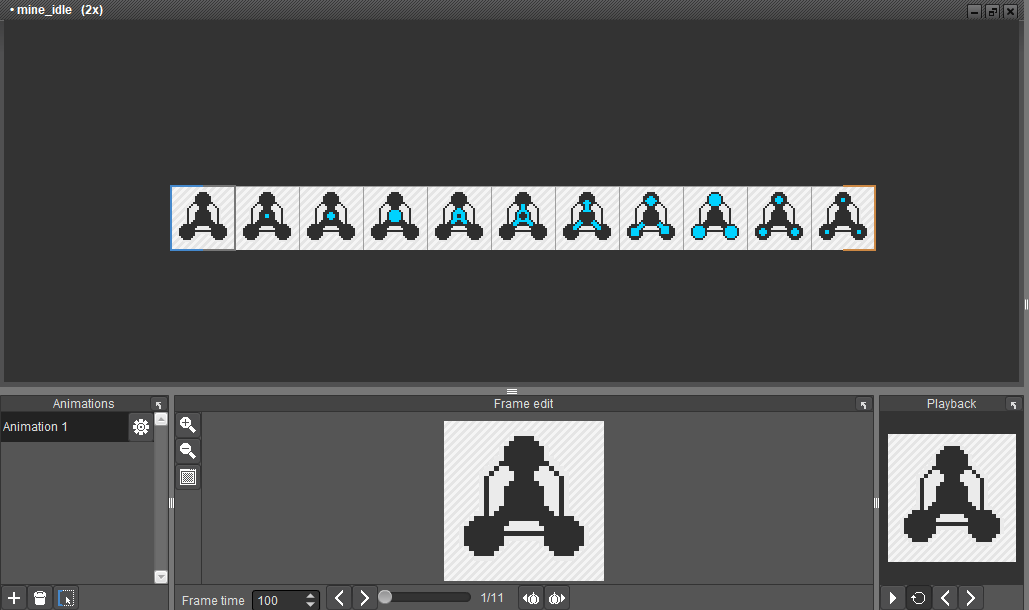 I used 2 tools for the audio. One of them is Chiptone and the other Audacity. I'll talk about Chiptone first.

Chiptone is a pretty neat tool and one I used to create almost all of the sound effects. It procedurally generates retro sounds that you can then tweak to your heart's content, add effects, then export them. In the screenshot, look at the yellow column of buttons on the left side, those generate sounds for specific uses. Like "coin", "zap", boom", etc. Then you can simply tweak the generated sound with the 9 little knobs under frequency and amplitude. It takes a lot of messing around but you can get some really cool sounds from it.

The other is Audacity. I mainly used it for editing sounds, except I actually recorded my voice a few times to use as sound effects (which is super fun). 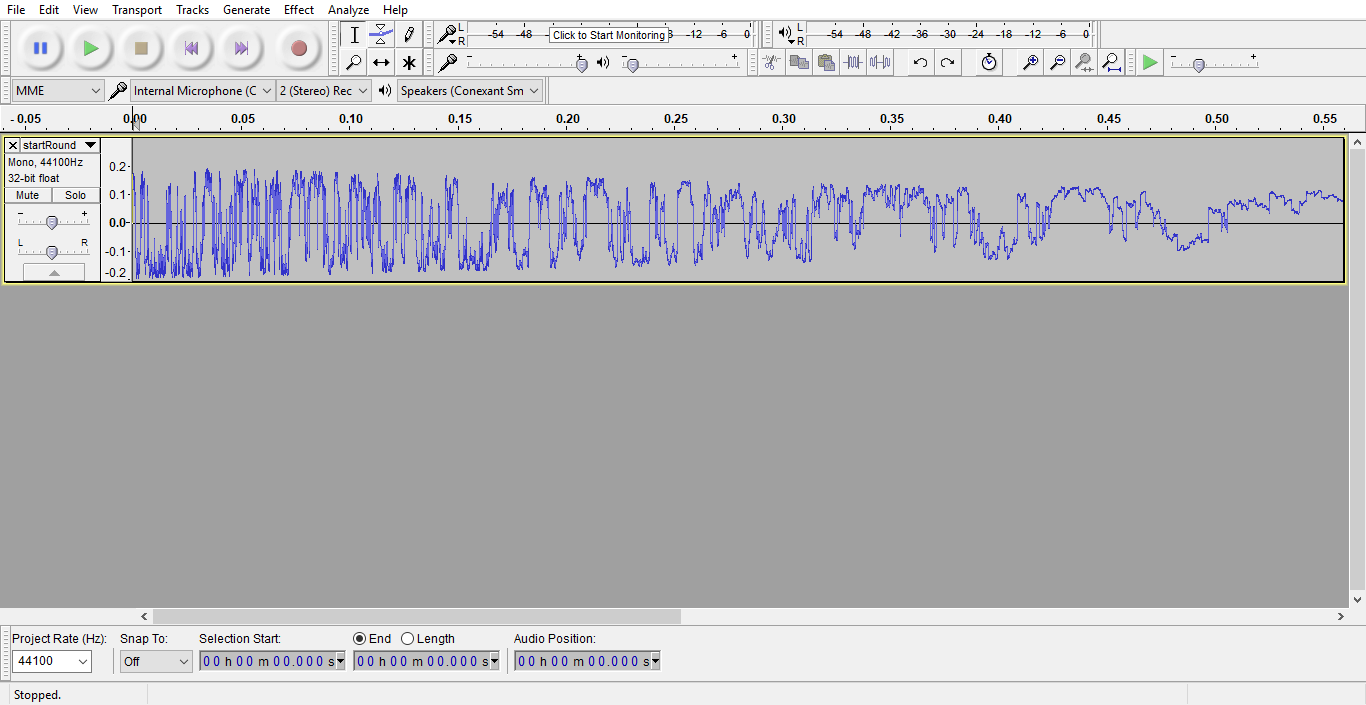 Audacity is a really great multi-purpose editing tool. I tweaked almost every sound effect with it. First I converted every stereo sound into mono. That reduced the file size greatly but also because I didn't have a use for any stereo effects. Then I would tweak the bass, treble, pitch, and maybe add effects like reverb and echo, until it sounded exactly how I wanted it.

The tool that brought everything together and made it into a real game is Construct 2. There's also a new version named Construct 3 that I will be using for my next game. It's a really easy to use and fast 2d game creation tool. 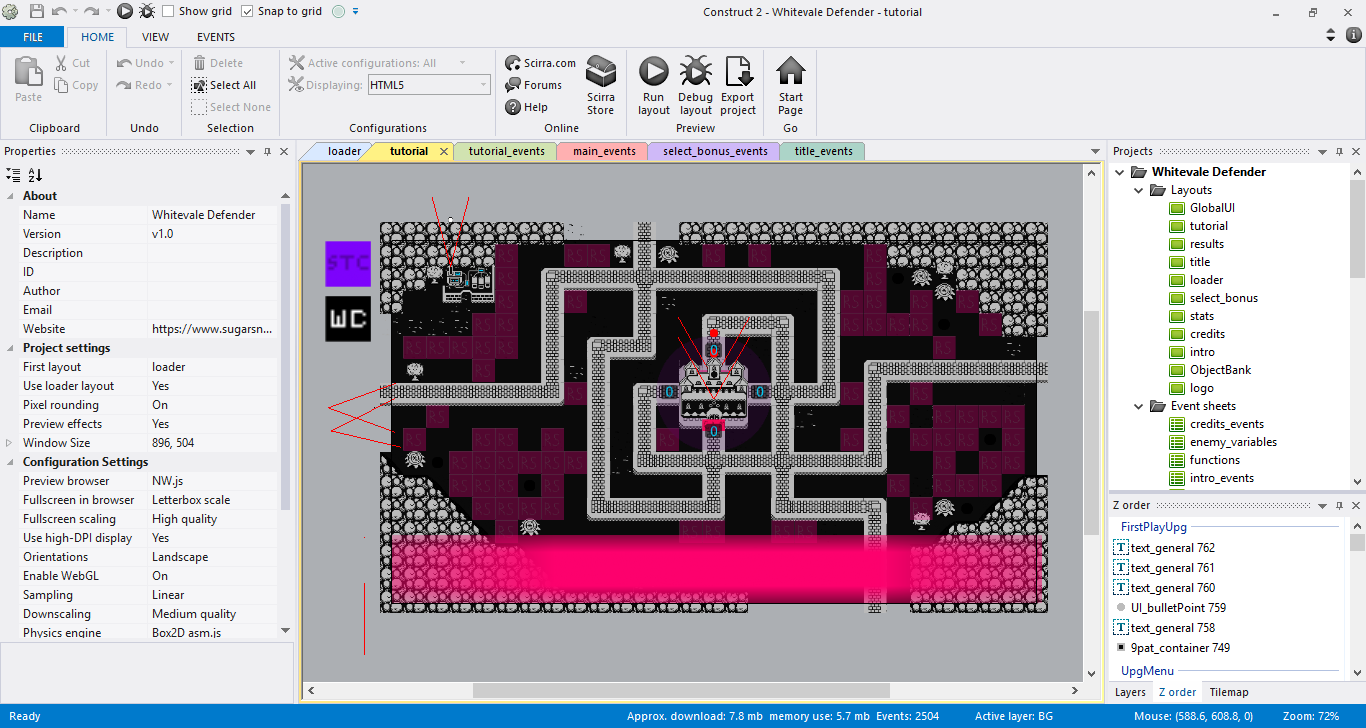 I think it gets a bad rep sometimes because a lot of people think it can't make "serious" games. That is just not true because there have been several games released on Steam and the mobile App Stores that have done well financially. I think the misconception is partly due to their marketing.

In the screenshot above you can see the level editor (or layout editor as they call it). You can add sprites, tiled backgrounds, text, and tile maps. It's pretty simple to put together a scene. The main place where the magic happens though is inside the Event Editor. 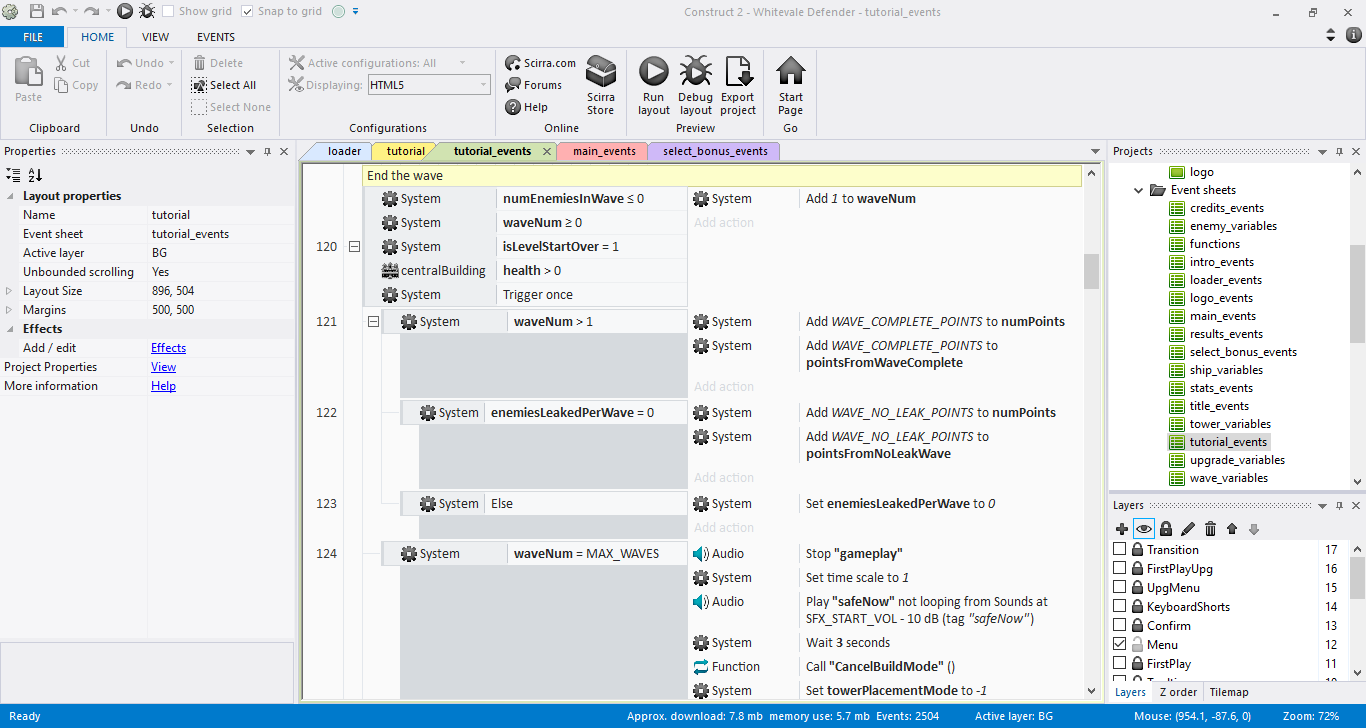 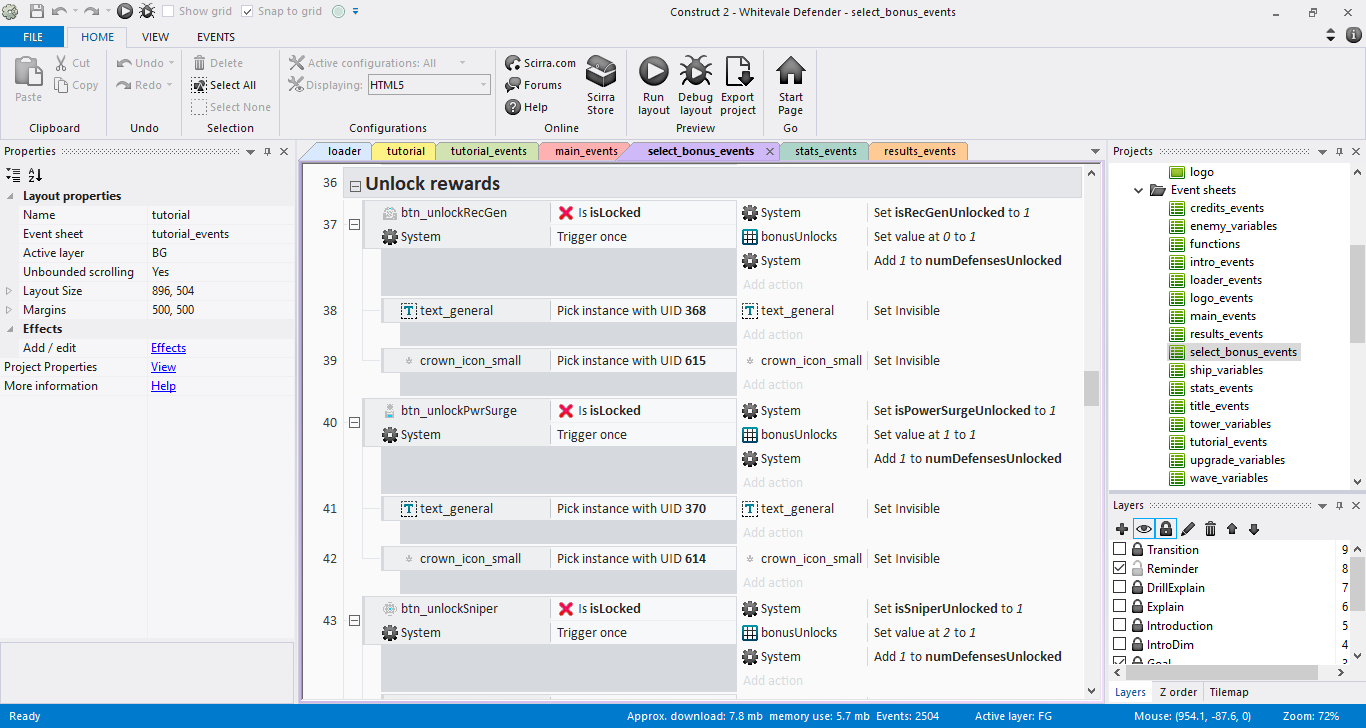 It's basically how you "code" the behavior of your game. It's like a cross between Warcraft 3's map editor, Scratch, and the companies own unique flare. It really is a very unique and powerful part of Construct that is unmatched in the 2d game creator space. I won't go too deep into detail because it's kind of complex, but you can read about in their manual section, How Events Work.

So there you have it. Those are the 4 tools I used to create Whitevale Defender: Construct 2, Pyxel Edit, Audacity, and Chiptone. I hope you enjoyed it.