You know how modern horror games have turned into these “hide and seek” or “hit me until I die” things because devs take away all means of defense because “that’s where real horror comes from”?

Please note this is just me thinking out loud, and this blog post doesn’t mean in any way that I’d implement any new feature into Enola.

You know how modern horror games have turned into these “hide and seek” or “hit me until I die” things because devs take away all means of defense because “that’s where real horror comes from”?

Now my question is: why should you care, specially if the entire game turns into some “hide and seek” because your perfectly capable protagonist doesn’t even seem able to pick up a pipe to hit bad guys (or kick them in the balls, for that matter). At the end, at least to me, the entire “run or be killed” is a source of frustration because it only reminds me how useless my character is sometimes.

If you’ve read my blog post about Outlast, then you know I found the whole “don’t defend yourself” to be insulting, when compared to Fatal Frame, where a 14 year old girl is able to defend herself from ghosts. Besides, Miles only defends himself “when the plot demands it” (which is like 3 or 4 times during the entire game, but the rest of the time he’s perfectly fine with being clubbed to death).

After that rather long introduction, let’s move on to the actual subject. A while ago I posted this screenshot on Twitter, and someone told me “I can think of two ways that could end, and none of them is looking good for Enola.” 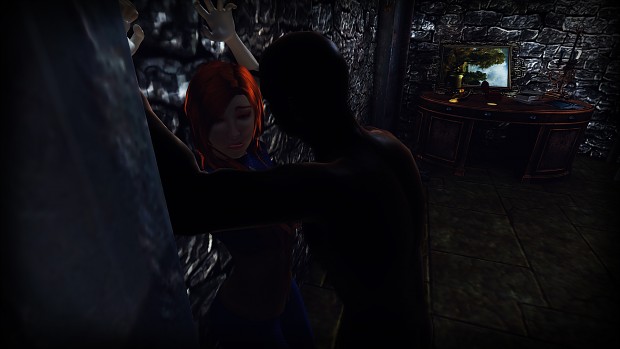 I then told him that was not quite accurate because she can always kick the guy, push him and run away. All because she can actually do something to defend herself, even if that something is not karate-punching/kicking or crushing bones. Every time an enemy grabs you, you enter in some sort of “survive mode” where you have to frenetically press all the buttons to escape. However I was thinking how this could be taken to the next level, hence the title of the post.

A “guard impact” is a technique in Soul Calibur (for those who don’t know, it’s a fighting game) that lets you “parry” a blow. If you have never played Soul Calibur, then a video will make things easier to understand:

A guard impact is a technique that lets you stop the enemy’s attack, and it must be timed correctly. I was thinking what if I could add some sort of “guard impact” into Enola, so that she can stop the enemies before they grab her. The technique would need perfect timing and would allow her a window to escape. However, if not timed correctly, it could cause a penalty to the player (like making it harder to escape the enemy grab, allowing him to freely hit her, or even making it easier for him to kill her).

As I was saying, this blog post doesn’t mean I would add such a feature. Actually I’m not even working or testing this at the moment (I am prototyping the final level of the game), so this may or may not make it to the final game. However, I’m still putting this out there because I’m curious to know what you think of this idea.

As always, you can download the demo or preorder Enola on our Website
You can also preorder the game on Desura, Indievania, IndieGameStand, Shinyloot, Gamersgate or JustAdventure. You can also vote for Enola on Steam Greenlight.

I personally love the idea of it. I do agree how frustrating it is to think that soley playing hide and seek is realistic, because most people aren't either carrying grenade launchers in their back pocket or black belts in karate. I do understand that to a point and it definitely does make you as the player feel completely vulnerable, but I think in reality a scared person would at least be carrying a pipe, board, shard of glass etc because they would TRY to use it if they absolutely had to.

Actually if it were reality I don't think that your average ]person would be snooping around haunted asylums in the first place, nor would they be Olympic speed runners either! I hate saying things are done a certain way only to be realistic, because that is a slippery slope! Where does it end right?

Anyway, that being said I actually am enjoying Outlast, and many games like it. However, I find the scariest thing for me is the jump scares. Sometimes, not the actual jump scare but just knowing that you will jump at some point. I actually hate it because I end up watching my husband play for me most of the time, becuase I literally get too freaked out to play myself. That was one of the great things about the trusty radio in Silent Hill-it helped take that edge off :) I want to watch the game play, but am too afraid to play myself-all of the LP videos I have ever seen are just silly, and you can't hear the game music, ambient sounds etc. I'm sure there are great LP makers out there I just don't know of any that commit to just playing the game for us.

I am getting way off topic, but just wanted to say that I think it is a great idea, and although I haven't encountered the shadow men yet (I'm playing it the 3rd time, but haven't played since two builds ago) I like the idea of guard impact ;)

This cut off an entire paragraph (sorta like the music at the Oscar's when someone Is talking for too long LOL), but it explained why I liked the idea of the guard impact, and that was mainly because you have to time it. Like I said in the first paragraph, the average person would pick up some object (pipe, board, shard of glass) and at least TRY to use it, guard impact has the same idea. You may time it just right and escape/defend yourself, but probably not, especially on your first few playthroughs. ;)