When we were in the initial planning phase of Fictorum, we wanted make a unique spell system that is simple, unencumbered, and powerful. Being a fantasy video game lover for most of my life, something that I had always craved, but rarely encountered while playing these types of games, was a magic system that provided a lot of variety in a small amount of spells.

Posted by ScrapingBottomGames on Feb 10th, 2016

I find that games with mage classes love to overload your spell tome and action bars with magic that varies in importance from the critical (think static field from Diablo II or fireball in almost any game) to the completely circumstantial. You may even be able to create a new spell with the properties that you desire (e.g. Elder Scrolls: Oblivion) or modify an existing spell that you have with another ability (a la metamagic in most Dungeons and Dragons games), but I found these binary, restricting, and high-commitment. You’ll either need to purchase the spell or prepare it before resting and, in the field, you’ll inevitably come across enemies that stay in a loosely-bound group that require a slightly larger area of affect to your standard fireball or a really quick enemy that’ll need a little bit more freezing power on your ice blast. I’ve yet to find something that allows the quick fluidity that we often see portrayed of great wizards in fantasy books and films.

After a lot of discussion, play-testing, and hard work, we created the spell shaping system for Fictorum; it allows the player to start a standard spell, then optionally shape it after it has been formed to add or enhance properties of the spell. 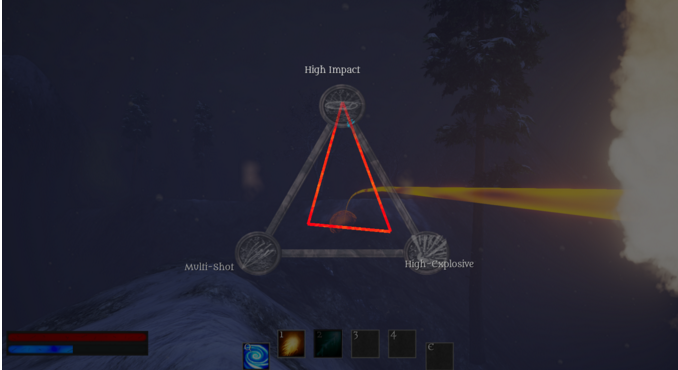 Time slows down while you’re shaping so that you can best choose how to you’ll enhance a spell.

The video below shows it in action—the first two fireballs cast are the base spell, the third is shaped to have multi-shot and high-explosive properties.

The symbols in the corners of the shaping triangle represent individual spell shaping runes for the current spell. You’ll find different randomly-generated runes scattered throughout the world and for sale from certain vendors.

…and these runes can be set individually for each spell and be swapped out as you see fit. In this video, the same fireball spell now has a persistent fire effect available on the shaping triangle.

Here are the runes that we currently have planned for the game:

Each rune will have a different color, signifying to which spell school they belong. They are:

You have a limited number of slots available for runes used across all of your spells, so you’ll have to choose carefully.

If you find yourself using an ice blast spell or a multi-shot rune more than others, you can spend essence (magical dust that can be found and traded throughout the world) to enchant that item to increase its potency.

Enchanted spells will have increased power and increased mana cost.

Enchanted runes will provide additional bonuses whenever a spell is shaped using that rune. Additionally, a percentage of that rune’s bonus will be applied to the base spell (no shaping needed).

Here’s a great example as to how that same fireball spell might look towards the end of the game with highly-enchanted multi-shot and leap runes:

We’re really excited to be putting the finishing touches on our spell system—Using only a few spells and runes, you can customize magic on the fly to have drastic and deadly effects and, when combined with the destructive elements in our game, allows you to become that great and powerful wizard that you’ve always wanted to play.