In today's post, Assistant Producer Joshua Fane takes you inside development for a brief explanation of what it takes to create The Center's enemies.

Hey all you ghouls and ghasts! Halloween is almost here, and I’d like to get into the holiday spirit by talking to you about what goes into creating a bunch of monsters that want nothing more than to rip you apart and devour you. The first step? Pointy bits. Lots of pointy bits. 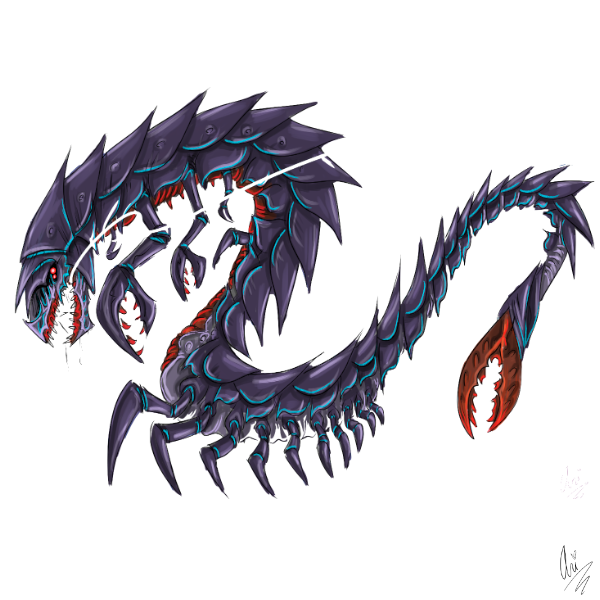 For The Center’s demo, we came up an insect theme for our monsters fairly early on. Arianna Edwards quickly did concept art for at least four different creatures, and once she presented them to the team, we started collaborating on what purposes they should serve. Pux, the creature above, is fairly small in stature, but has a tendency to swarm in large numbers. We decided to use it primarily as a way of teaching the player about ANU’s basic combat functionality. Once we came to that decision, we needed to begin transforming that scary looking concept drawing into a living, breathing monster.

Since Pux was Ari’s baby, she took the lead on creating a base model for it back when Wilmar Arroyave was still working on ANU and HEX. Once that was finished, she passed it over to Will and he went about sculpting it in fine detail. From there, it went to Anthony Davis, who set about rigging it for animations. We wanted to emphasize its insect-like qualities in its movement, and Anthony did a fantastic job of capturing that. Look forward to seeing his work in The Center’s demo! 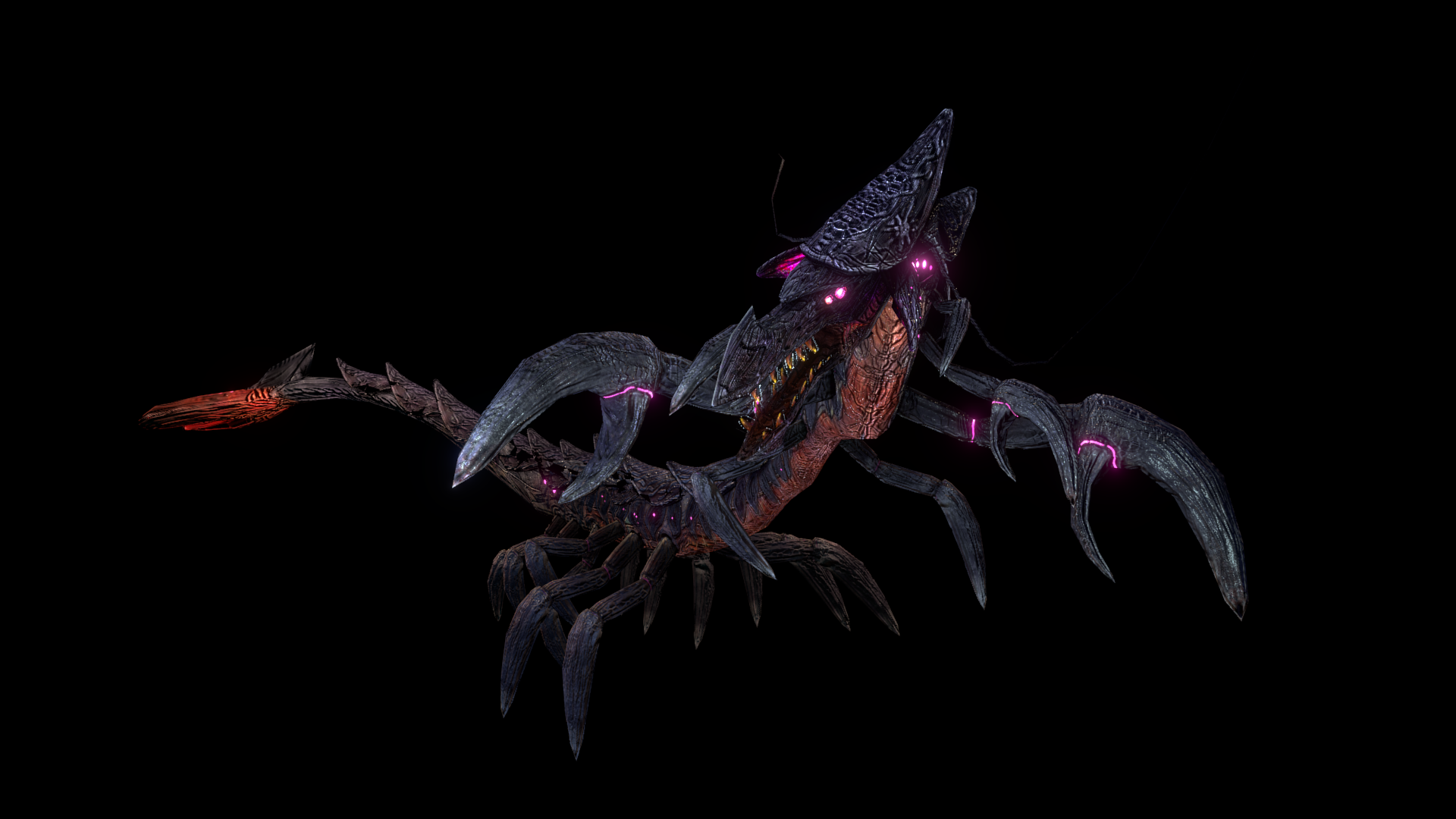 Towards the end of Pux’s development, we began talking again about what sort of challenges we wanted the player to face in our demo. Pux served to teach the player about ANU’s functionality, but what about HEX’s? As I’ve talked about elsewhere, HEX is extremely important to ANU’s mission, and his abilities are essential to the player’s successful navigation of The Center’s challenges. In order to help demonstrate this in the demo, we turned to another one of Arianna’s creations: the Threadvire. 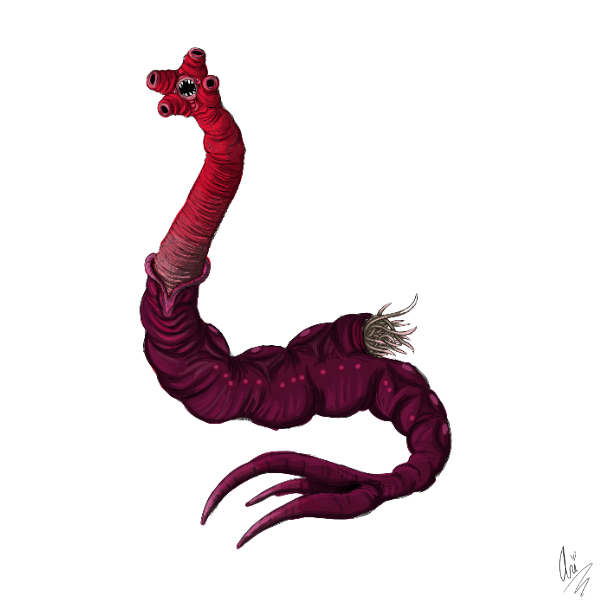 Unlike the Pux, who swarms ANU and attacks in a straightforward manner, we wanted the Threadvire to ambush ANU in order to create a sense of suspense and danger in our demo’s underground section. The team decided that these creatures should have the ability to spit an extremely potent acid. By slithering through tunnels in the walls of the cavern, they could emerge and surprise ANU, firing a salvo of their acidic gobs, which would persist upon contact with objects, before retreating. Because ANU is unequipped to deal with a threat of that nature, he is forced to rely on HEX’s shield projection ability. This presented our team of programmers – Paul Bennett, Matt Stover, and Devlin Willis – with a number of distinct challenges. Fortunately, their command of the Unreal engine helped us to translate our ideas into challenges for the player, all of which we hope will harry you to no end in The Center’s demo. 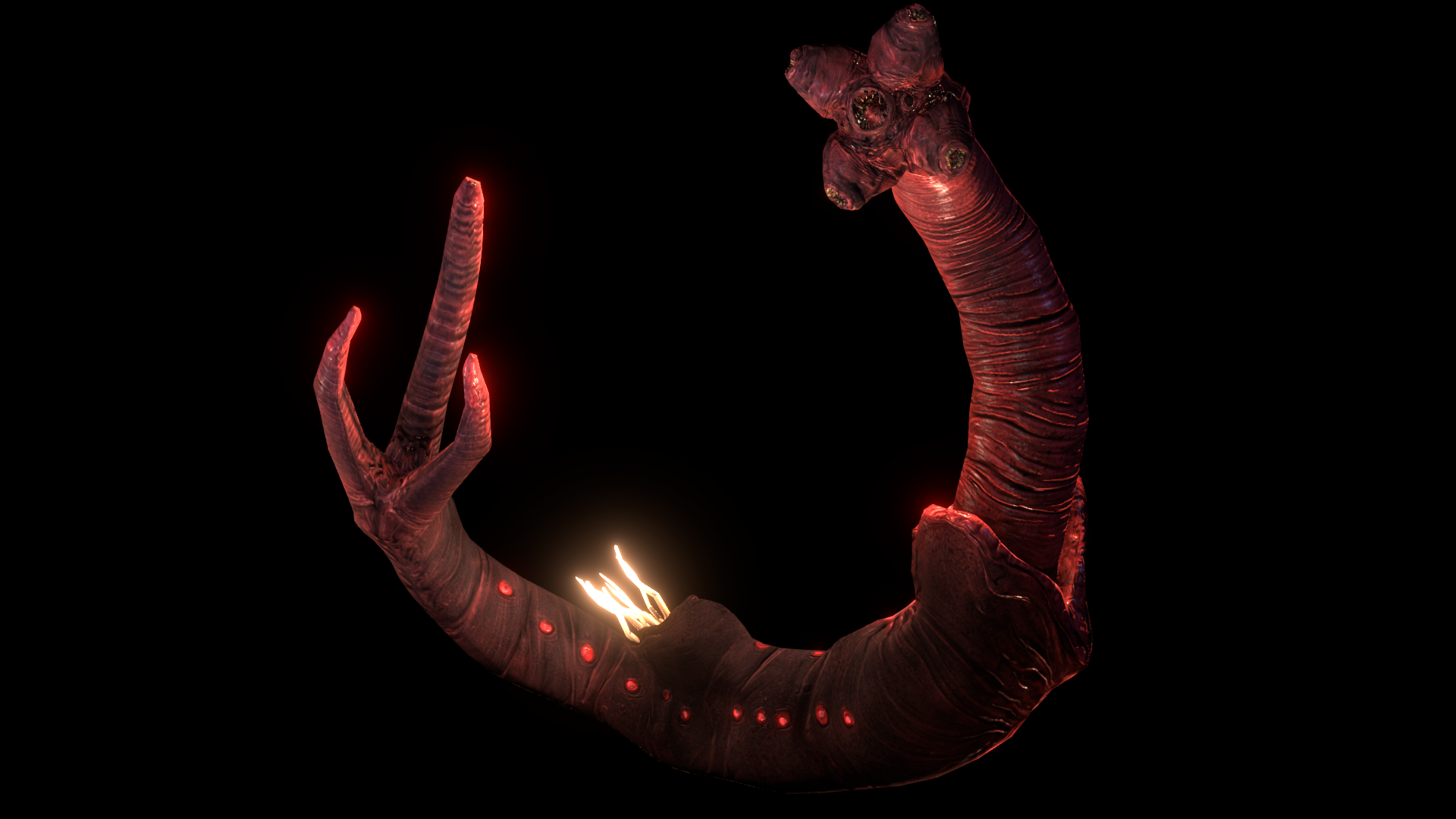 While we were preparing these two enemies for implementation in the engine, Studio Daisho’s Richmond, VA office was creating some incredibly creepy sound effects for them. Those guys are truly masters of their craft, and I can say without a doubt that you will not be disappointed by the ambient tracks, background music, and myriad of character sound effects that Jason Rosa, John Anderson, and Albert Clanton have composed and created for the demo, let alone the final game. I’ve recently spent some time rolling around our pre-Alpha and the full effect is tremendous.

I wanted to end this post by addressing something that has been weighing on me these past few days. Back in my Game Jam post, I made the prediction that, by the end of that week, I’d know exactly when our Kickstarter would be launching. I also implied that I’d be sharing that information with you, and I’m a few days late on that. Studio Daisho became something of a developmental superpower that weekend and has kept an incredibly progressive pace ever since. I felt immensely enthused by our progress and the energy I was feeling from every member of the team, and that enthusiasm was embodied in my premature statement. For a campaign like ours, it’s very important that we have all our ducks in a row before the final commitment, and I personally underestimated the scope of outreach that is necessary before we submit. I’m solely on the hook for that one, and I apologize. That said, the announcement is coming very soon, and the next time you hear about it from me will likely be as I’m giving it to you. Anyway, I hope you have an awesome Halloween this weekend, stay safe, and as always, follow us on Facebook and Twitter to receive updates as soon as we have them for you. See you soon!