Post feature RSS Behind the Theme Music in Emberlight

Read the story about the composition of Emberlight's Main Theme Music Score. Andey Fellowes discusses the process and how he reached the goal of a great musical score for the game.

Evil, darkness, corruption. These were the words that gave Emberlight's theme it's shape. And after extensive conversation on the game's lore with Will (William Phelps, Creative Director of Emberlight) it became clear to me that the music needed to tell a story that captured both the thematic material of Emberlight, and its inherent emotional weight, as well as the endless nature of the in-lore cycle of the Ember Order and Emberlight's re-playability as a roguelike game.

Whenever I approach writing a theme, I like to have as much information on the world and its lore as possible. I like to immerse myself in the game's world. That way, the music comes from the game world as much as the characters or stories do. In this way, Emberlight's theme could as much from Emberlight's world as Ember itself. That was my thinking going in. 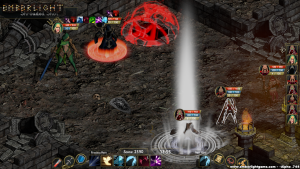 In all the discussions on Emberlight's lore, one of those words just kept coming back to me as what underpinned the emotional weight of the game. Corruption. It was important to get darkness and evil across in the music too but it was this idea of corruption that hooked me into the music. And once I got started writing, the music took on a character of its own.

Whenever I'm composing and I get a keyword like this, the first question has to be, "what does this sound like?" It's always a challenge to condense something so abstract into musical terms. Sometimes a feeling can be portrayed in a single chord, or a set of them. Other times in a handful of notes. It was with a handful of notes that I started on Emberlight. The motif needed to stick in your head. Like corruption, it needed to stay with you. And it needed to be instantly recognizable as Emberlight's theme.

But it needed to be more than that. It had to tell a story. To that end, it was 'call and answer' that brought this corruption to life. And as the motif developed into a fully formed passage, Emberlight's theme was born. 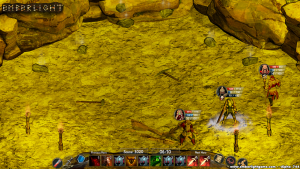 When the theme begins, you hear this soprano vocal. Three notes. The question, a beckoning. And then, in amongst the rising layers of the music, you hear the answer. A cello. Gentle, alluring, it gives its reply. And it's this interplay between the vocal and the cello throughout the piece that would tell the story. A tale of need, of change and of loss. That first question and answer is one half of the Emberlight theme. A theme which is built out of several passages but is ultimately defined by what it begins with and returns to. This interplay between vocal and cello. The pure losing itself to corruption only to be overcome by a new force of purity which in turn will lose itself to corruption.

Something that was really important for me, when approaching corruption from a musical standpoint was that the melody needed to contort at times, to veer off in some unexpected direction and give a sense of warping and deterioration of spirit somewhat. For Emberlight, it felt right to portray that with atonality, so, here, the notes and chords fall out of a strict scale and begin to subvert expectation as they take a darker turn.

Often you'll hear the vocal melody attempt to maintain tonality and adhere to the direction you might expect the music to move in only to have the cello take the music somewhere else. And each time the vocal attempts to rectify it, the cello wins out and drags it, usually downwards, into darkness and into chaotic. That's something I really loved about composing for Emberlight. It's a permadeath, roguelike dungeon crawler. A game about heroism against the odds, in the face of certain doom. That gave me the opportunity as a composer to really go there with the darkness. It allowed for a foray into the darkest things music has to offer. 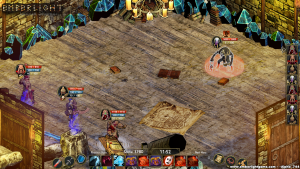 Later in the piece, you'll hear that the vocal and the cello begin to mix with one another. As if, where once the two were separate, now they are becoming one. What the vocal was when it was heard alone is gone now and is becoming something new. But where you hear this unison, it's fleeting. After that, the next time you hear the theme from the beginning, it's different. The parts have swapped. The cello is calling now and the vocal is answering. A harrowing musical message about insidious corruption. Then, the entire piece builds, exponentially dilapidated tonally and rhythmically as chaos ensues. All before an abrupt halt is called. In waiting for the bell to toll, silence falls for a moment. The final moments of the piece bring the vocal back for a longer, drawn out rendition of the initial motif. This time, for the first time, the cello and vocal fold together in resolution. The musical tension built through the piece is resolved. The transformation is complete. Corruption has won. The cycle has ended. And so it begins again.

Visit our Steam page below and wish list us.