Episodes One, Two and Three of the AMC TC - a standalone game based on Duke Nukem 3D. This release contains all released Episodes the AMC TC, so if you've never played before all you need is this. If you've already beaten the previous episodes, grab this file and then copy your data and eduke32.cfg file over to the new Episode 3 directory in order to carry all your progress over. This release is fully patched. The AMC Squad are called into action again when a mysterious benefactor sends them the location of a highly-important Cycloid Outpost. But when they arrive, a scene of devastation awaits them...later, Sang's evil Doppelganger arises in Egypt, hoping to repeat the Kilmaat's goal of absorbing King Ramses' power. Do you have what it takes to stop him? Featuring new weapons, equipment, enemies, bosses, and another new playable character, Episode 3 brings even more content to the table. Prepare yourself for an epic adventure.

The third episode of the AMC TC, a huge standalone game based on the Build engine has been released! Taking direct inspiration from the FPS of the 90s, you'll face a huge variety of foes and explore a vast array of new environments in a 30+ hour story-driven campaign full of epic encounters and surprises.

v3.6 contains significant engine upgrades; AMC TC can now finally be played with the polymost renderer. The Polymost renderer uses OpenGL and offers better performance, as well as fixing the view shearing effect that produces motion sickness in some players. Doom64hunter and Sangman are responsible for the vast majority of work in getting this up and running, alongside support from the EDuke32 dev team (particularly TerminX, Hendricks266, Pogokeen and StrikerTheHedgefox).

Classic/Software mode support will still be maintained, but the Polymost renderer is the preferred renderer from this release onwards.

There is also additional content, some exciting new cinematics by sebabdukeboss20 and more art overhauls as well. More GUIs have been replaced with design work by AliCatGamer as well. Finally, there is a new map starring Alien Armageddon's Bombshell built by Micky C that can be played in Episode 3. To find the level, start your journey by defeating the Choasphere level, and ensuring you have the paranormal research division up and running. Once beaten, Bombshell can be chosen in the AMC base and played as any other character!

The v3.5 Redux version contains a massive art overhaul of the vast majority of enemies and weapons by sebabdukeboss20, as well as brand new GUIs by AliCatGamer; Doom64hunter also lent a hand with art duties. It also contains new content in the form of 3 new enemies for Episode 3's Egypt section, the re-casting of Rusty_Nails and Geoffrey by Major Tom and Eddie Teach respectively, a new addition to the boat cutscene in Episode 2, and new lines for Sang after a certain story section, as well as additional tweaks and improvements to existing maps like Micky Begins and Dis Base. There are also new lines for Zaxtor, Mikko and Micky.

The story premise is that you play as the AMC squad, a task force formed to protect the galaxy from powerful threats in the spirit of Marvel's Avengers. These threats include aliens, demons, fanatical cultists, mercenaries, and even evil regimes. You go on a globetrotting and interstellar adventure and fight in varied and detailed settings, ranging from snowy mountain ranges to lush jungles, from urban city levels to expansive high-tech moon bases.

You get to play as 10 different unique characters, which can be dynamically switched in between missions, each with their own unique arsenal, abilities and personalities. Also unique to the mod is that you can find collectables, upgrades, additional weaponry and more, with your progress being stored completely without the need for manual saves. In addition, levels are selected through the use of a world map, and can be replayed at any time.

As of Version 3.6 and up, the AMC TC uses a modified EDuke32 engine, which makes a number of changes that could not be implemented through CON scripts easily, or at all. It also prevents certain crashes that occur due to the large number of art tiles that are used in the game.

EDuke32 and Build are licensed under GPL 2.0 and the BUILD license, which we have included in this download.

AMC TC pushes Eduke32 and Build to the very limits; you will need a much more powerful computer than the original games to run at a stable framerate; 2GBs of RAM and an i5 at the very least is recommended as well. If you're having framerate issues, try lowering the resolution. 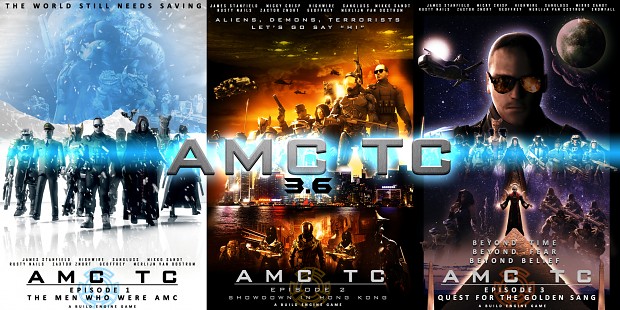 Wow - Just Wow. So much work put in, and an enjoyable play. Thank you team.

Thank you for your hard work!

Thanks to you guys, I have something to sink a couple hours into again!

To play on Linux:
1. compile eduke32;
2. put it into AMCTC_EP3_RC2 folder;
3. rename Maps to MAPS;
4. Uncheck Polymer in the launcher (otherwise the game runs slow).

It seems you'll also need to rename some other folder and files to uppercase, but I'm not sure which ones and if filename extension must be uppercase or lowercase. Some sounds are glitchy.

that all exe is 64bit only

that was my error sorry, you can grab a 32bit exe here:
Dukeworld.duke4.net

Wow James! I haven't played E1 & E2 so far, was waiting for E3 to come. I just on intro and it's... amazing! I remember playing Imagination War I, your voiceacting there :) I'm so glad this has evolved into this epic epicness through so many years. Thank you and all the team!
Will there be more episodes?

(Still I see that good old hack for the "Armageddon" difficulty title :D)

Is there an "episode 2 complete" savegame somewhere ? I don't feel like replaying the first two episode again :D

You can just jump straight into epsiode 3, though I'd stick to normal or easy mode since higher modes assume you've got lots of gear from the first 2 episodes already :)

Yes! So excited for EP3
you're a legend Jblade

in episode 1 i cannot do the radiaton leak because the 2 screen overlays are legit blinding
https gyazo.com 62a30786d3e1e800dc6bebba1f841169

you need to be playing on classic mode

polymost has issues and is not recommended at all, the problem seems to be the game isn't loading the additive palette files; are you using the latest patched version?

Can I use a high res pack with this?

no, everything will break

I'm having trouble installing this mod as it only shows Nuclear Winter, I do have the megaton edition and the files I need, but where do I put them?

Check that, all I had to do was install the update

Ho hai there, thanks for your job.

Runs like trash and is virtually unplayable for me as well because the guy behind the project refuses to utilize OpenGL.

Apparently 30 FPS with spikes down to single digit frames is acceptable to some people...

I don't refuse to utilize OpenGL, I'm not a programmer and the Polymost renderer does not support TROR in the build we're using, which we utilise heavily to design our levels.

AMD is gaining more market share by the day. Why utilize a map builder that only plays nice with intel?

we started work on this 12 years ago man

Time for an overhaul.

if you have an AMD CPU that can cause problems, not sure why - try lowering the resolution (software mode doesn't use the GPU at all unfortunately)

Do you know if it's related to eDuke?

It might be; if you grab the patch you might be able to get it working with a newer snapshot of Eduke32 since they've made some performance tweaks (though it'll be untested since there's a few things broken in it)

Already applied before starting. Guess it won't work for me, thanks anyway.

Nah I meant an Eduke32 snapshot:
Dukeworld.duke4.net
It's untested and unsupported but it might yield better framerate for you (just download either the 32bit or 64bit version and put the eduke32.exe into AMC's directory)

Just tried, cinematic intro is now super fluid (was laggy before too) but after choosing character it's still 10-20 fps capped, checked all video options, can't find anything. Well.

No, you need the patch for that.

I have no clue how to get the game going, can anyone provide detailed instructions on what to do. When I launch the Duke32, it only gives me the option to play the nuclear winter, when I launch that, well simply put, I do not get the mod.

Grab the patch, that should fix the problem.

Hello ! I have a small questions : How do you exit computer terminals ? Is there a hotkey ? Everytime I use one I get stuck :D

Same "Use" button you used to look at it.

Omg I feel stupid. Thank you !

Amazing TC! im playing it on my nintendo switch with eduke. One of the coolest FPS conversions Iv ever played.

zaxtor rocket launcher and devastator type weapons shoot greene squares like the sprites are missing is that normal or am I doing something wrong?

it's normal, those are the sprites from his Oblivion mod.

yea I knew it was legit and no wene I looked in the art file and saw the sprites together. thanks for letting me know. I gotta check out the other mod now

the camera keeps shaking when I enter the mech in the snowbase level, anyone else having this problem

This looks really awesome but I can't get out of the base map because I can't do anything.
Loadout screen soflocks me in it because I can't exit it. Mission Select won't let me go anywhere. Save function doesn't work either.
Tried a re-install and download. Tried the patch and that made it worse. What am I doing wrong?

You probably have the game installed under Program Files? Don't do that