Curious what kind of speech works best in games? Here's some useful insights and survey results!

To speak, or not to speak.

Working on the Nowhere Prophet random events we came upon the following question: What’s the best way to present characters talking to the player? We weren’t quite sure and instead of making assumptions, we decided to ask the internet using these images you can find in this post. 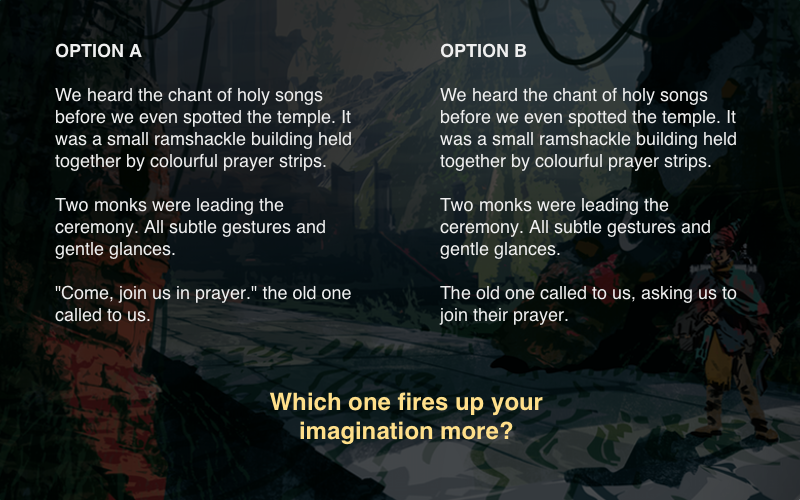 Turns out, this was a pretty good idea. For one, we found out which one works better for our goals. But not only that, we also got a few really valuable replies from some clever folks out there. The insight we got from that will make our game better. And to pay the internet back, we really wanted to write those ideas up in condensed form, which is this blog post.

We shared the images above on facebook (in our private testers group and in the indie game developers and game developers groups). We also posted to reddit (inr/gamedev and r/IndieGaming). I also tweeted the images, though that got only few responses. Lastly we approached some narrative designer friends of ours directly.

And these are the results:

At the writing of this article 80 people have weighed in: 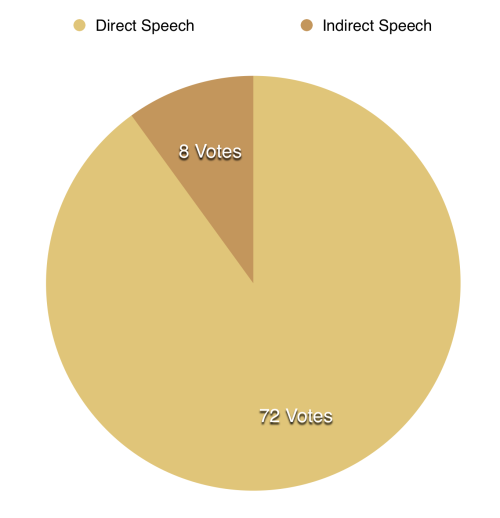 Now this does not mean, that direct speech is always superior. It remains a design decision to pick the style that best fits your game. And for that we need to look not just at the numbers, but also at the emotions behind peoples votes:

Of all the people that replied, a few gave reasons for their decision. In general most said that their decision was based on the degree immersion: Direct speech seems to draw players in more. It was said to be more engaging, to make the reader feel more involved. It also seems to leave more room for imagination and a few other things. 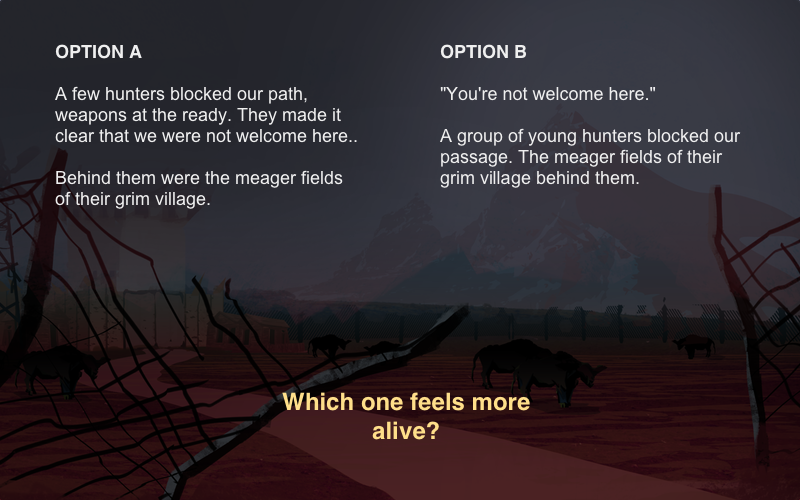 Based on these thoughts and some other, longer comments we compiled a closer look at the pros and cons of both methods. Here are our collected insights:

Direct speech gives the impression of the action happening right as you read it. It’s not someone relaying information or retelling something they heard at a later date. Instead the player is present in the moment something is being said.

And not only is the player present, he can also be directly addressed. This is useful to provide very direct calls to action. In indirect speech however things feel a lot less personal. Someone is speaking to someone and the player reads it “second hand”.

Writing down the actual words someone says is a lot more concrete than describing them. Through that the personality of the speaker can be expressed directly. Do they swear? Do they speak precisely? Use only simple words? Describing that would take up a lot more words.

This also allows you to create your own slang for your fictional world. These might be more flavorful replacements for common nouns or specific swear words unique to a certain faction.

A note on swearing: One reply to our survey took offense at the cursing in our example. That’s certainly something to keep in mind. 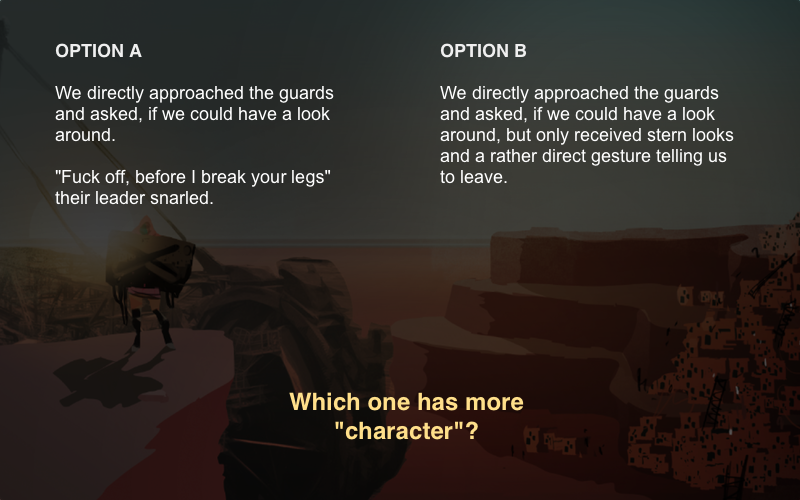 We humans are very familiar with speech, and we’re excellent at reading between the lines. The specific words someone uses, the pauses they make or even the things they doesn’t say help us learn more about the speaker. Using punctuation marks you can also… be a great way to… show how someone… is speaking! And since in video games text often interrupts the game, getting more bang for your buck is always good.

This however also makes direct speech harder to write. Especially if you want to convey different voices of different characters and make those consistent.

Another property of the density is that a lot of this additional information is vague. It requires the player to interpret the words. For example: What are the intentions of the character? There’s a lot more ambiguity that readers are used to than when those intentions are simply described and handed to the player. The opposite of that is a narrator holding your hand, explaining everything unambiguously.

So that’s a lot of positives for direct speech, but indirect speech has one massive advantage: It allows you to compress a lot of text down into a simple abstraction. Instead of writing out an entire Bujjaha monk’s sermon, we can simply describe it.

The way you structure text around direct speech can be a bit cumbersome and slow down reading. The reader needs to go from descriptive text to speech and back. It can also require some weird constructions to make the player understand who’s speaking at what time.

So with all that said, how should you decide? Our recommendation:

So for us, it comes down to a mixture of both. Addressing the player directly works great to pull them into the situation or to give a sort of call to action. So to either open an event or to prompt the player before he decides on an action.

This makes the text between the quotation marks as a sort of condensed version of the entire text and players in a hurry can just look to that to get a quick idea of what’s going on. 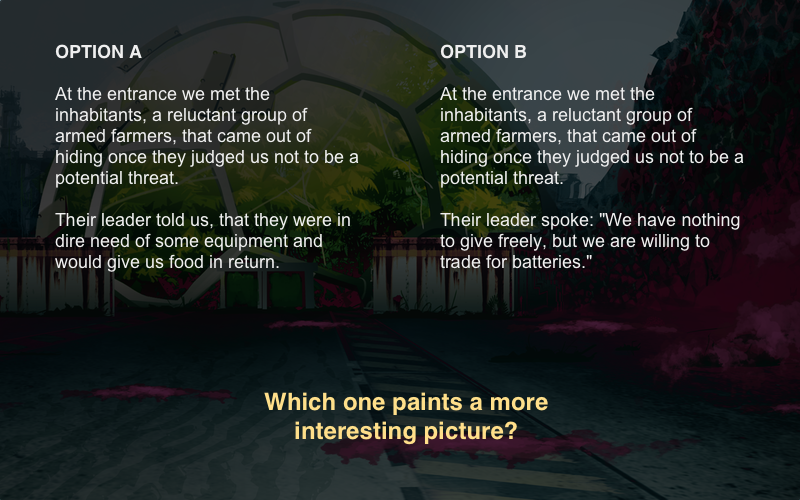 However there will be many places where conversations are long and writing those down verbatim would just be silly. We wouldn’t want the player to rely on the content of those texts anyway, so they end up being only flavor and we can get away with just describing them.

And that’s it from us for this week.