In this tutorial I show you how to make an infinite "self generating" game. Includes video and a downloadable example game.

In this tutorial I explain how to easily make an infinite game with the M484GCS, by using a feature called "Object Generators".

An "Object Generator" is actually just like any other game object: the most simple definition would be that "it's an object with a Shooting ability". But instead of "shooting out" lasers, we make it "shoot out" the entire game!

And doing that is very easy; if you can make a space alien that shoots lasers, you can also make an "object generator" which shoots out anything you can imagine. 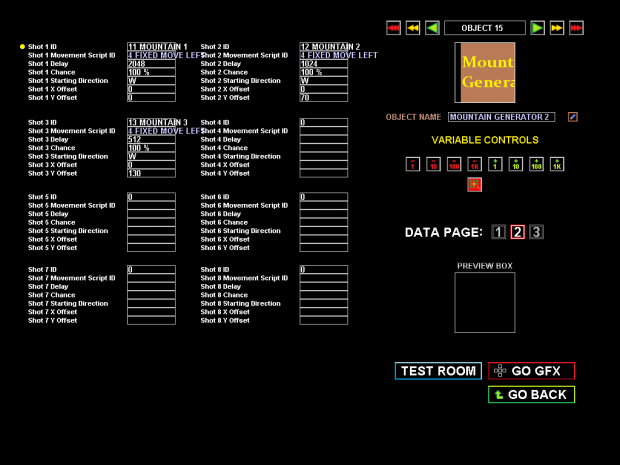 The picture above shows the "Shot Page" of a "Mountain Generator". As you can see it simply shoots out 3 "Mountains" with certain Offsets and Delays, and gives them a simple script which tells them to "move left". These simple "mountain shots" make up the entire scrolling landscape of our example game.

A similar generator is made for the enemies, and then we go to the Level Editor and place these two generators outside the visible screen area: 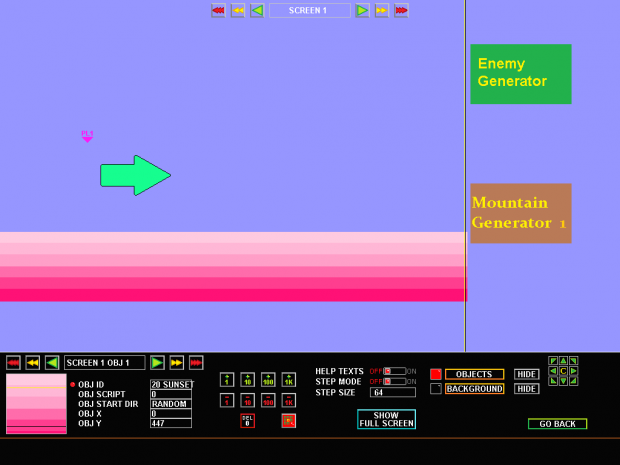 And when we press the start button, the results look like this: 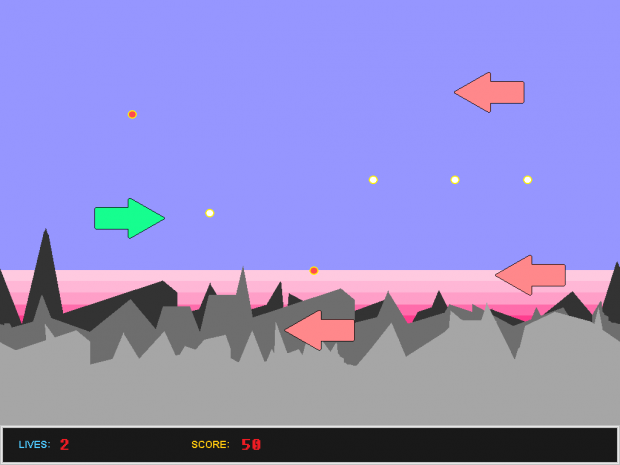 This simple example game constantly generates more enemies and more landscape. It's an infinitely "self generating" scrolling shooter, that goes on forever...

But what makes it special, is that the whole thing is powered by the same the "Shot System"; The first generator shoots the Background, the second generator shoots Enemies, and then the Enemies shoot bullets...and all of these are actually normal Game Objects and are made exactly in the same way.

Here you can see the flexibility of the Advanced Object System that is the core of the M484GCS; if you need something, just shoot it. :D

And of course this is just the basic level of object usage; add unlimited cross-category transforms and scripts to the mix, and you can achieve truly professional effects, all done in 15 minutes using a fast and simple construction kit.

Here is a short video which shows this whole thing in action:

In the beginning of the video I show how the "generators" look in the Editor, and then I go to "Test Game" and play the automatically generated game for a few minutes. Notice how the mountains change to water near the end of video...this is achieved through a "Lifetime Transform" that I put for the "Mountain Generator"; at regular intervals it changes itself into a "Water Generator", which in turn eventually changes back into a "Mountain Generator".

Here is a download link to the example game that is shown in this tutorial:

You can open that with the Editor to see how it's done. In addition to the "generators" you should pay attention to the "drawing layers" and "speeds" of the 3 mountain objects; these two attributes are used to achieve the 3 layer parallax effect.

And also the enemy death sequences are worth studying: when an enemy dies, it is deleted, but before this it "shoots" out the explosion + the "falling enemy"...and then the falling enemy shoots out smoke while it's falling.