In this update we show the progress of the final motion comic as well as go over some of the new battle mechanics.

We are going for a really strong push to get a beta out to you guys so that you can see what is so special about this coming update. We have taken our time to work on this so that our next installments will have a good platform to build unto.

This will be quite different than your initial experience. New dialogue, new characters and new places to explore. The battle system will be much more robust and the overall story experience will be far more obtainable and less disjointed.

We take making games very seriously. Although this has made the second episode come a lot slower we feel this is the right way to go. Giving you what you have pledged for or more is our goal. We know we have something really special and we have put together a pretty impressive team. I feel like all the pieces have really come together.

That being said, the motion comic ending is coming together rather nicely. Ricky is putting together some really nice artwork from our concept. I was told by Whitney I should not show the whole thing so I decided to show a panel that was not too far into spoiler territory. 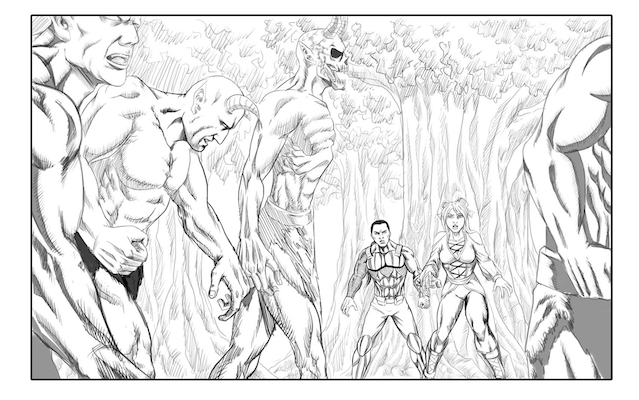 The battle system is something that we are getting really excited about. As we see it coming together, we are thinking about new and interesting ideas to do with it. Some of it is about the environment interaction and a lot of it is generally how you can strategically move your party around the field.

Here you can see more of the types of attacks that we may have. This would be piercing damage and as you can see, it would be effected by both range and the character's position on the grid.

Here you can see that a character can take up a certain amount of space which can affect its movement ability. Having this type of control and variation will make some really unique experiences. We look forward to having a lot of fun with this. Someone (Shaun) once told me that RPG turn based battle systems are like a puzzles. As this system becomes more robust I really begin to take that point of view to heart.

I have been working on many more animations, working on new enemies to help move the story along.

We hope you enjoy what we have presented to you all today. We have much more content and much more work to do and we will get it done. What ever it takes!