You begin your journey on the planet Hasphal, where prejudice seems to have torn the world apart since the beginning of time. Humans have proclaimed jehts, the native beings of Hasphal, disfigured, dangerous and unworthy of living on the same planet. They believed them to be monstrous creatures from Remerin (a hellish place) and hunted them down in honor of their Gods.

Join Sen as she finds herself thrust into the middle of this ancient conflict, discovering the mysteries about herself and the true history of Hasphal and its inhabitants. Everything is not what it appears to be as religion and life itself unfolds in this exciting adventure.

This update is going to focus a lot on the battle mechanics and what changes to expect. We look forward to any comments and critique as this will deviate in a lot of ways from the previous system and the game as a whole. We have been holding off showing a lot of these features as we wanted to make sure it was tested and functional and most of all fun.

Before we get into that, we just want to acknowledge just how long it is taking to recreate this. Admittedly, it is taking a lot longer than we anticipated. This is mainly due to trying to create a perfect base for the rest of the chapter to build on. The battle system, the map systems, all of the menus had to be redone. A lot of the base is finished and a lot of the game is playable, but there’s still more that needs to be done. So let’s move on to the update!

Getting this thing done has been the most pain staking part of this process. The biggest obstacles we faced was getting the right people on the job. Now we have gotten the system to a presentable state and we are ready to go.

The previous system suffered from repetitive turn based game play. In most JRPGs there is usually a single way to fight enemies in your standard system. One of our main goals that we had when we started this game was to have make our system into something the player wanted to do. We wanted battles to be just as engaging as the story and persuade you to enter combat.

One of the ways that we initially started with which is already in the previous version of the game was the inclusion of combo system. We have since upgraded that system by making it faster smoother and more engaging.

While using the combo system (your basic attack), the enemy now has a chance to knock you out of your combo string by performing a riposte. These happen randomly with multiple variations on occurrence based on what you are fighting.

We have also included a defense system in which players have the option to avoid enemy melee attacks manually. This will use some of your AP bar(previously known as the RG bar) and will completely negate the damage that would effect the character. 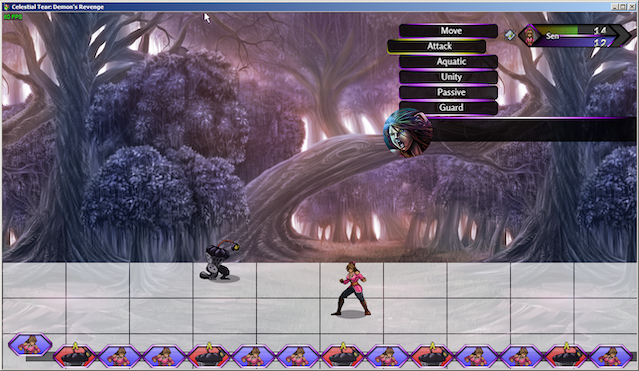 The grid in place is what we referred to as positioning in the past. Where you are on the battlefield will effect what your opponent does. With the inclusion of obstacles and terrain, it makes for some very interesting scenarios. Again, the way that your opponent may react to an obstacle or terrain will change, especially between creatures and people.

We feel like these mechanics will not only be a lot of fun, but they will change the way you look at the characters you play, as well as the enemies you face. Strategy will play a big role in this updated system.

Since we increased our resolution, we noticed our older face portraits were not going to be as noticeable as they were before. We needed something much bigger. We had already started the process of adding emotions to the character portraits and with help from our artist, Ricky, we had that fully realized!

We also took another look at some of the scenes and decided that they were a bit too static for what was going on so we added a little more movement so that they were more organic.

We hope you all enjoyed this update! We are constantly working on this game. We rarely show anything unless we have had significant progress. We are trucking along and we are still extremely dedicated. We do not have a solid release date as of yet for the engine update or episode 2, but as soon as we do we will let you know. Thanks for taking a look at our latest update. We look forward to showing more soon!

Please let us know if you have any questions, comments, suggestions, anything. We’d love to hear back from you all!

Why so much work on the update and more battle stuff

In this update we show the progress of the final motion comic as well as go over some of the new battle mechanics.

In this update we talk about the coming upgrades to the game as well as give some deep incite on what we are going to improve.

Celestial Tear: Demon's Revenge is now released on steam! Demon’s Revenge is an episodic RPG set in a Sci-Fi fantasy world. Begin your journey on Hasphal...

eh. not the best with graphics in my opinion. still, looks pretty neat

looks interesting and fun! hope you get funded in kickstarter

Thanks a lot we are trying hard to get funded.

Thanks it helps a ton! We really appreciate your pledge.

I just finished playing the demo and I really got hooked by the story. Nice job so far!

I am really glad you like it. Our next demo will be a lot better. But we really appreciate the comment.

I love the storyline & the art. I can't wait to see more. Where's the best place to follow for updates

Shadow of the Game Role Playing