Labyrinth introduces character progression and many other new and exciting additions to the game.

In this build, we have overhauled some existing systems and added our first functional pass of certain key features of the game. These new features include: 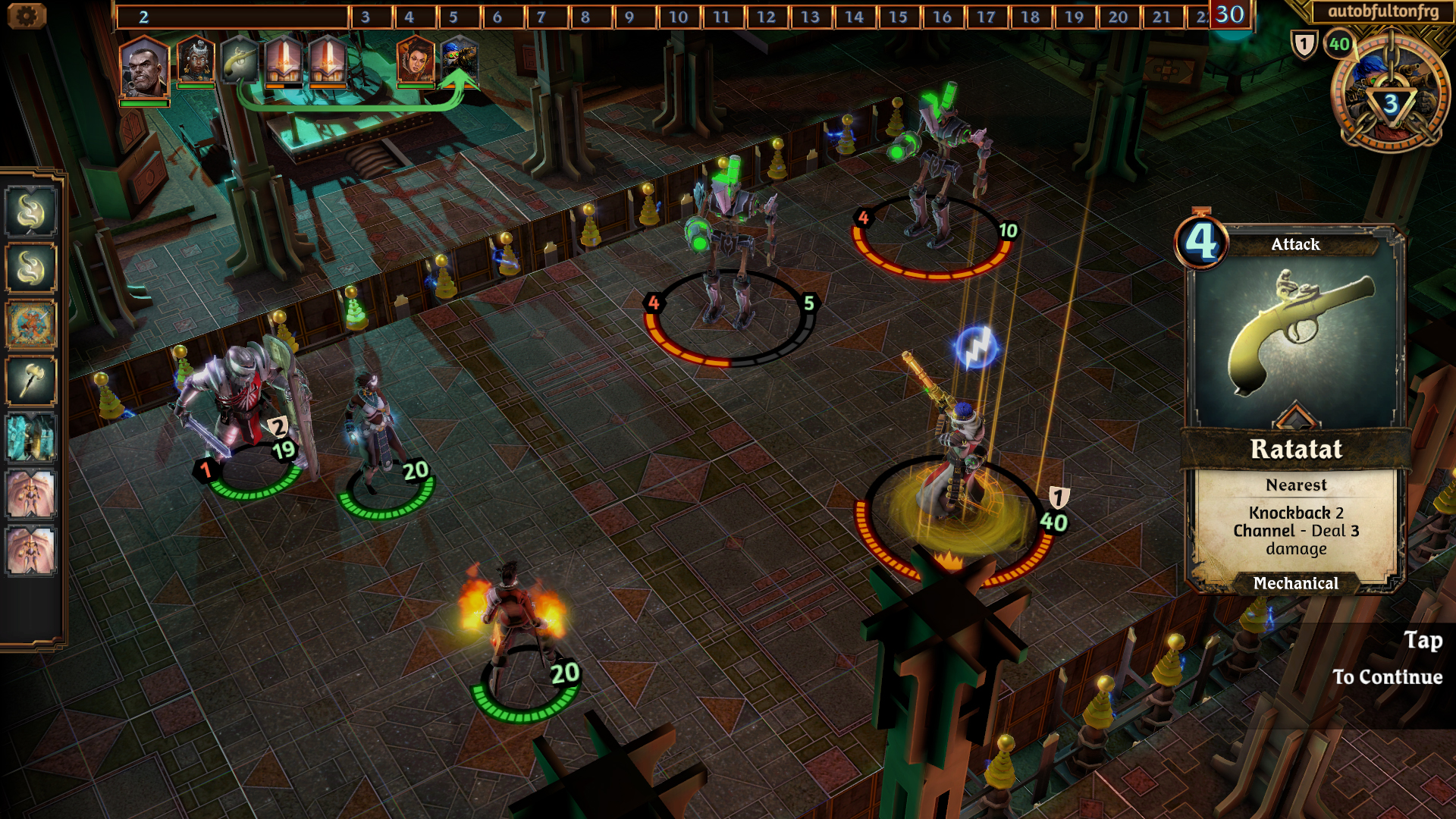 At the end of each battle, characters now gain experience which applies toward advancing level. The schedule of experience is the same for both Heroes and Bosses. Characters gain experience for certain actions within a battle, for surviving a certain number of ticks, and for victory. Characters that lose a battle will still gain experience, though not as much as they would by winning!

Each character can gain levels, up to a level cap of 15. The experience required to gain the next level grows logarithmically, so leveling up takes more effort the higher your level. 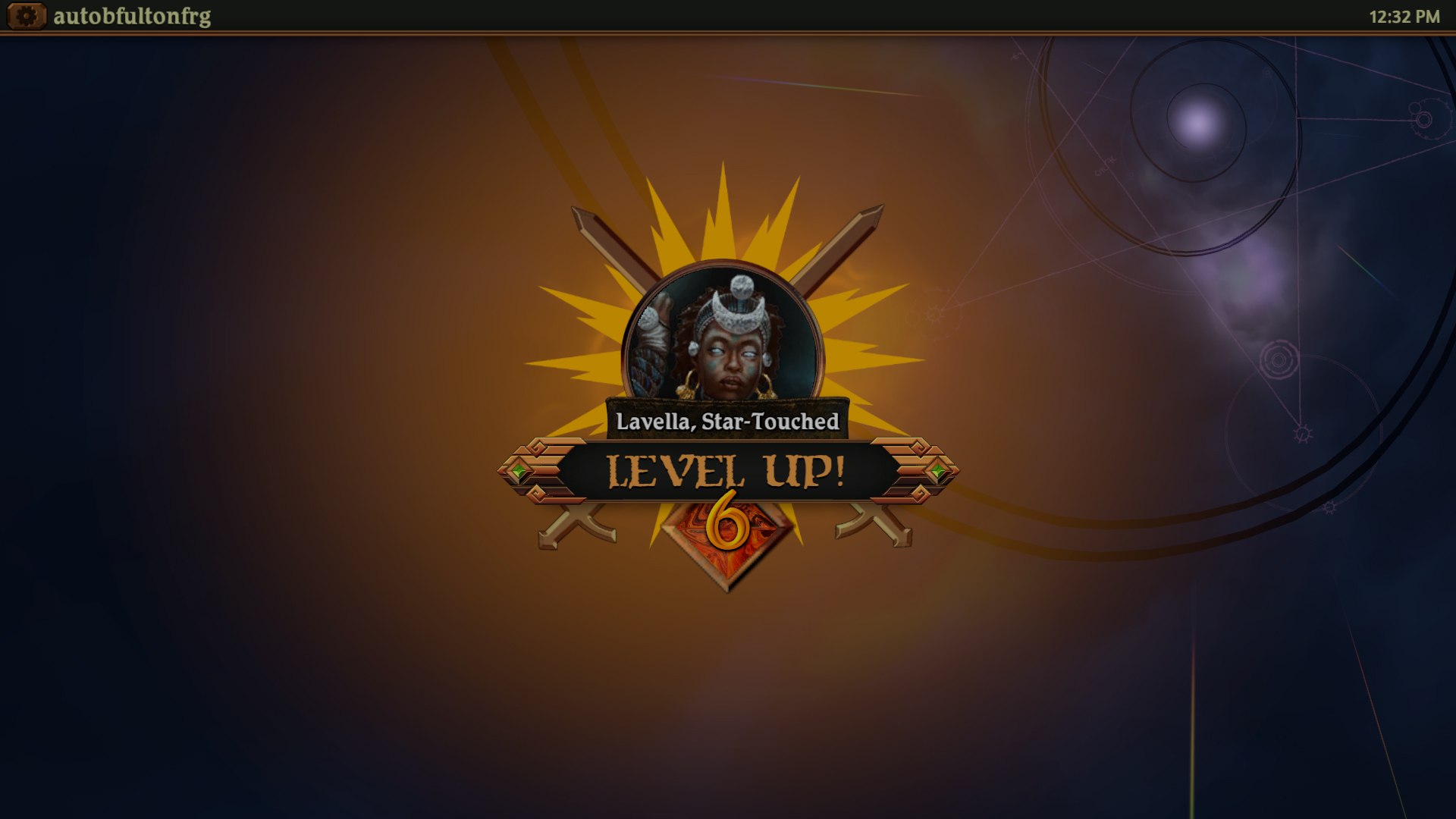 Each level, characters unlock new rewards. These include:

As cards are unlocked, they are automatically added to your collection. As you unlock Stars or Perk slots, check back into the deck builder--you may have new options available to you! 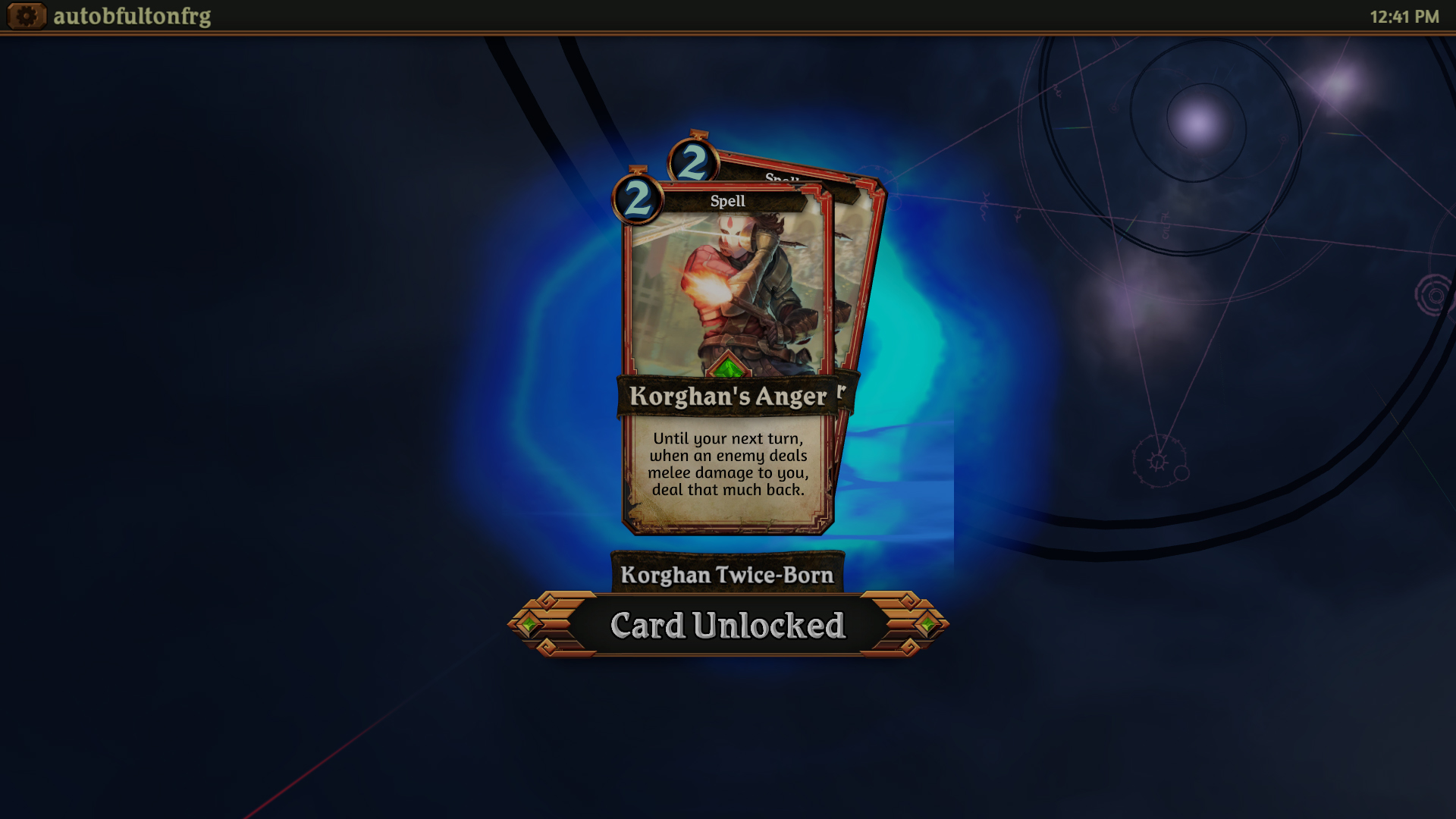 For the last few months, we have been extensively playtesting the game, locking down the remaining core rules, and refining the primary mechanics for heroes and bosses. In that time, we have designed and redesigned a *lot* of cards.

In this new release, we have added over a hundred new cards, and removed many that didn’t fit the latest design for one reason or another. We have made a thorough balance pass, and reorganized the set with an eye toward our final rarities. For now, our focus is on the basic and common cards, so these are the cards that you will find in the deck builder.

In addition to all the lovely new cards, in the Deck Builder you will find that the boss cards are organised by a new category: Traits. Put simply, Traits are like Disciplines for bosses. The difference is that each boss has not one, but two Traits. This gives deck building a new dimension for bosses, and helps to give each boss its own identity, by combining the strategies of its two Traits.

There are eight Traits in core game:

Beasts are large, terrifying monsters with powerful melee attacks and a suite of endurance abilities. They seek to close distance and deal damage to the opposing heroes directly. The minions that they summon tend to be on the larger side, with more health than the average minion.

Warlords are mighty warriors that command their minions from the front lines. They have a mixture of abilities that enhance their minions and deal damage to the heroes directly.

Casters are powerful wizards that use guile and subtlety to eliminate their enemies from a distance. They tend to be more fragile than other bosses, and rely on their minions and magic to protect themselves.

Giants are huge! These awesome warriors strike terror in their enemies with slow, devastating attacks. By themselves, Giants summon no minions to their aid, and focus entirely on their own abilities.

Elementals are living embodiments of the primal forces of the cosmos. Some elemental bosses aren’t actually incarnations, but wield elemental magic. Elemental minions are living spells, and tend to have death effects or effects that impact the board in ways other than simple damage.

Spirits are the souls of the past, returned from the other side of the Veil. Some bosses wield spirit magic. Spirit is the dominant “summoner” trait, conjuring armies of minions to swarm and overwhelm their enemies.

Celestials are unearthly servants of the gods. Celestial spells and minions are some of the largest and most powerful in the game. Many celestial minions summon other minions.

Mechanical bosses are the brilliant engineers of the Guild, and the monstrous machines that they create. Mechanical bosses have many ways to deal damage from a distance, either directly or by summoning traps to threaten and confound their enemies.

Also in this new update is an improved way to play against other players: Casual mode. When you start a new raid in Casual mode, you are matched with another player’s boss based on your past performance. Our intent with this mode is to give each player the best experience for their level of skill, while keeping it open and accessible for all styles of players.

We’ve been working on our player-to-player matchmaking for many months, and Casual mode is only the beginning. We are currently working on features that may interest players who are looking for a more competitive experience.

We’ve added one new hero and one new boss to the game. 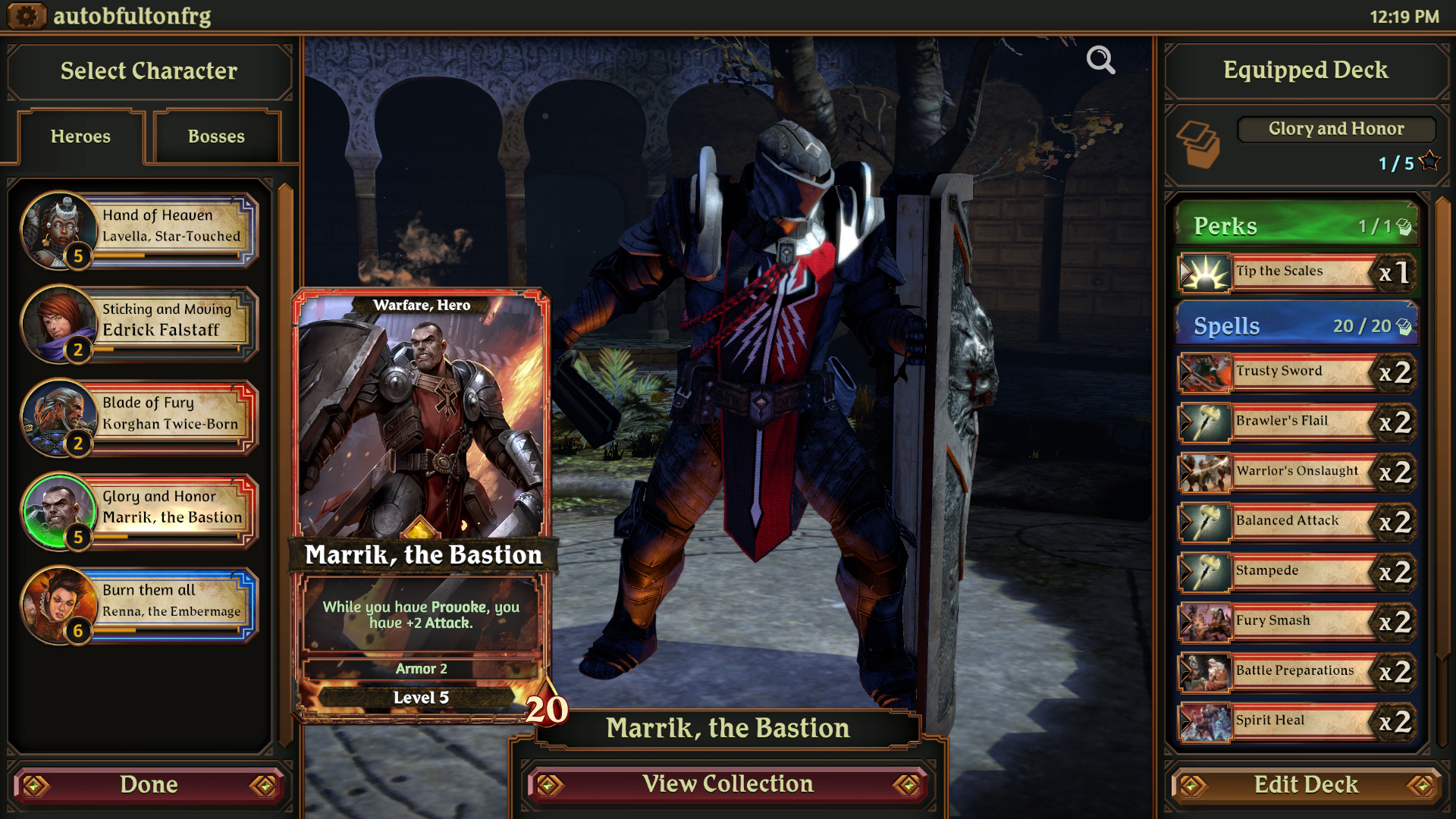 is our second Warfare hero to be added to the game. As such, he shares most of the cards available to Korghan, but he serves a slightly different role. Marrik has more Armor than Korghan, so he is a bit more resilient in battle. In addition, his ability gives him +2 Attack when he has Provoke. The best use for Marrik is to place him at the center of the fight, and keep Provoke up as much possible.

Our second new character is our first Mechanical / Caster boss, Adolphus. Adolphus is an engineer of the Guild, based in his workshop in deep under the streets of Starfall. He protects this domain with a host of meta-mechancial soldiers. When he takes 4 or more damage from a single source, he summons a Defense Sentry minion for free. Anyone attempting to raid his lair will have to deal with swarms of aether-powered machines.

Heroes now have a new way to arm themselves for their adventures: Equipment. Equipment cards go into the deck like other spells. When you play an Equipment card, you equip your hero with a new piece of gear that he or she can use multiple times, depending on the card’s Durability.

There are two flavors of Equipment: Weapons and Offhand. Each hero can have one of each type equipped at time. Weapons take the space of the hero’s basic attack and replace it for as long as they are equipped. Offhand cards do the same for the Guard ability.

In addition to new features, we have made a host of changes and improvements to the game, too numerous to list comprehensively. The most prominent improvements are:

This is probably the most impactful of our recent changes to the game. We have made the choice to simplify the structure of a turn, such that only one hero acts at time. From a rules standpoint, this is a fairly subtle change. When you have multiple heroes that act on the same Tick, you no longer have the choice of which heroes will act first. Characters all act in a set order.

While this may seem like a loss at first, the user experience benefits are enormous. For starters, we only need to display the interface for a single hero at a time. This has eliminated all confusion about which character is acting. It also affords us more space for each character, which has allowed us to expand the maximum hand size to 7 from 5. This change all but eliminated issues with overdraw and the discard dialog. In general, the interface is less cluttered and easier to read.

The one turn where player-controlled hero sequencing is most relevant is on turn one, when all three heroes are guaranteed to act. To maintain some degree of player choice, at the start of the game, heroes act according to their order in party choice screen at the start of the raid. In this way, you can configure the order of your heroes such that characters who benefit most from acting first (like the Priestess) can be placed first, and they will always act in that order during the battle.

We’ve made a pass at all of the cards, reformatting the text to make it simpler and more legible. This change has hinged on a few new features that we have added to our card frame.

Range is now displayed in its own line, below the card name. If a card has an area effect, this is also listed here. Cards with a specific duration also make use of the range line.

We have also added extensive tooltips across the whole card set. When a word has a tooltip that word appears in bold, and you can reveal the tooltip by placing your pointer over the word. In many cases, cards reference other cards by name. Such cards are also linked in this way.

Rarity is now displayed on each card, as a diamond-shaped gem just above the card name.

Several cards in the game offer players a choice of modes when they are played. These are “modal” cards. We have added a new interface that allows you to choose your mode from within your hand, streamlining the card playing process into a single motion. This improvement allows us to make more modal cards, without slowing down the interface with unnecessary and clumsy mouse clicks.

We have overhauled the defense screen, and put in place the foundation for our future efforts. The left side of the screen is basically unchanged. When you first come to the screen, you see a list of your available bosses. You need to assign these bosses to one or more of your four available defense slots. Once you do, you will see the boss’s win / loss record, which will update each time you log in, if you have been raided.

In addition to all that has been listed here, we have fixed too many bugs and made too many visual improvements to count.

Below is a list of known issues with the current build of the game. We are working on these, and they will be fixed in a future update. 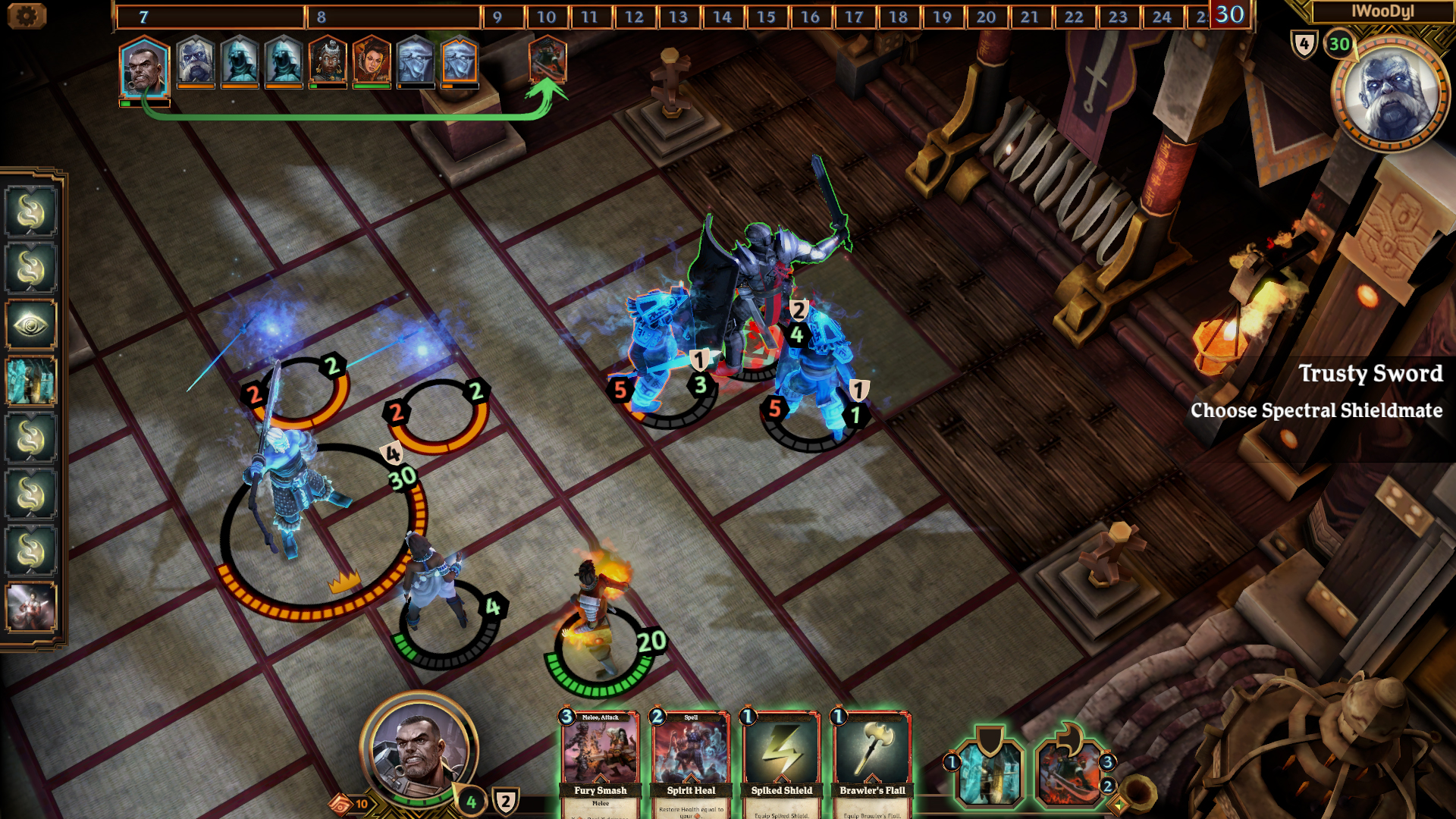