Dear backers and supporters! You are really great, and we from Homegrown Games and Against All Odds Games are very grateful for every single € pledged so far. Here a look into our weapons stack :)

As you might have noticed, we didn´t hit our improvised mini-stretch goal of 2k Euros yet. However, many of you who have already pledged and shown your support and love asked if it´s possible to get the old prototype even with the goal for that not being reached. So there are actually many people who want to play through the world prototype no matter how dated the visuals were back then. And yes, we can understand that. 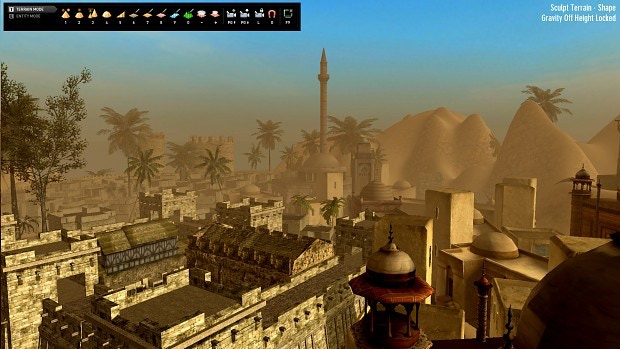 Meanwhile outdated, but still a work of love.

We are working on a solution or better a compromise for that.

In the meantime, let´s take a look at the weapons of Antinomy:

Honestly, many parts of the great storyline Ali-Han came up with is about uniting people, about diplomacy, trade and convincing others to follow you. However, when it comes to the source of tyranny and despotism in the Holy Land 1892 AD, the villains that put Nathaniels father into his early grave, the truly evil forces and their minions, diplomacy has to take a nap and the weapons come into play.

Set against the background of a crumbling Ottoman empire, the weaponry is something usually not explored in games.

Please note that these are only a few examples of the weapons we have planned during pre-production (currently more than 30).

The Kilij, as a specific type of sabre associated with the Ottoman Turks and the Mamluks of Egypt, was recognisable by the late 15th century and is therefore an anachronism in the World of Antinomy, as it had been replaced in military use during the 1820ies. However, many remained in private property and they were still used as decoration elements, often partially gold-plated and embodied jewels. 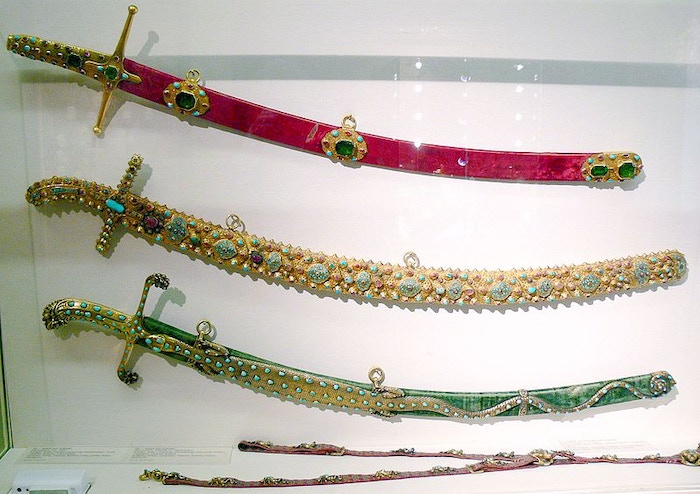 In our old testing habitat (yes, the world prototype) we had already one very rough Kilij in place that was capable of several different attacks and parade moves.

GG PROTOTYPE VISUAL AHEAD
(not representative) 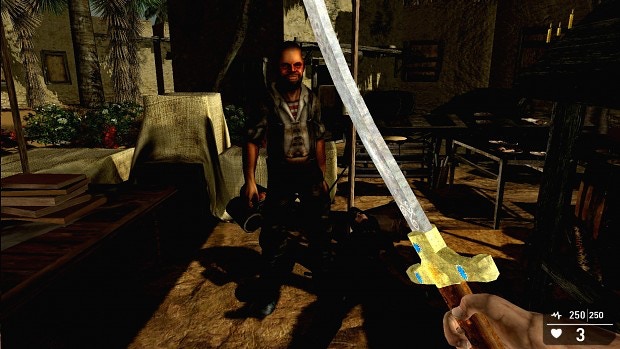 Ugly, but functional: Our old Kilij from March 2015. Several beautiful Unreal variants are in the making!

In Antinomy, the Kilij is a powerful melee weapon capable of keeping several attackers at distance and parrying most melee attacks. It can be combined with an improvised shield, a knife or even a left-hand-wielded pistol.

The yatagan or yataghan (from Turkish yatağan) is a type of Ottoman knife or short sabre used from the mid-16th to late 19th centuries. The yatagan was extensively used in Ottoman Turkey and in areas under immediate Ottoman influence, such as the Balkans or the Sinai.

While not being robust enough to parry attacks from heavier melee wepaons without breaking, the Yatagan is an incredible lethal weapon when used with well-aimed thrusts against an opponent in close melee range. It pierces through most armors and is sharp enough to cut off - well, anything. The Yatagan is the first weapon the player can find in Antinomy, and it is also the first weapon you could find in the old world prototype when looking carefully.

Ottoman Muskets were famous for their artistic craftsmanship, their stopping power and the breathtaking decorations often applied to them. They made their way all across the globe even to China and the Southeast Asian islands, while playing a major role in the Ottoman army untill mid of the 19th century.

In Antinomy, the player will encounter several different muskets with unique characteristics each. While the traditional smoothbore muskets will deliver sheer stopping power at medium ranges, the rifled muskets (Type 1861 and similar) will give a gameplay value comparable to sniper rifles in modern game, espacially if the long-range shooting skill has been leveled up.

Hand Cannons, basically high-power firearms that could be used at least theoretically during movement, have been an idea running through weapons history since the 14th century. Various different approaches have been built and tried, ranging from literal cannons / mortars designed to be hand-held during firing them, over extremely calibered flintlock pistols to the legendary Austrian .600 Nitro Express Zeliska revolver, a weapon for home defense against tanks or alien motherships. Each century had it´s own approaches, we have choosen one of them to star in Antinomy. 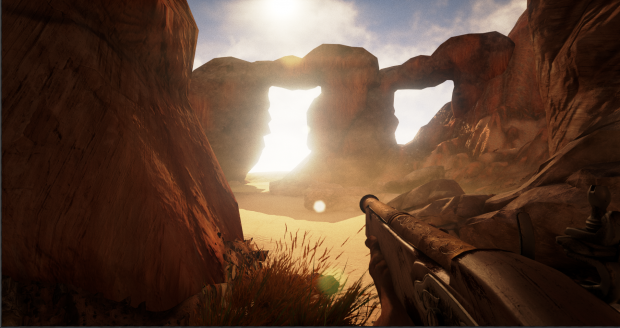 The Hand Cannon in Antinomy may lack precision, but it delivers an uncomparable punch.

Our model is based on the classic Ottoman musket design with a shortened barrell combined with the mobilty of a musketoon. As you might have guessed, it is devastating on short to medium ranges, bringing in the gameplay value of a shotgun with long loading times and the stopping power of a battle tanks. The hand cannon is our current signutare weapon in the latest Unreal builts and killed many innocent wooden planks, stone pieces and furniture.

Do you want to roam the World of Antinomy and defend the people of the Holy Land with some truly unique and beautifully crafted weaponry? Great, let´s make it happen together!

I especially like the hand cannon, I wonder how it reloads. I myself am trying to create my own first person shooter. For yours how did you spawn the gun onto the arm? Are you exporting both hand and gun to unreal?

Yes, both are exported to unreal. And it reloads - well, it reloads slowly ^^