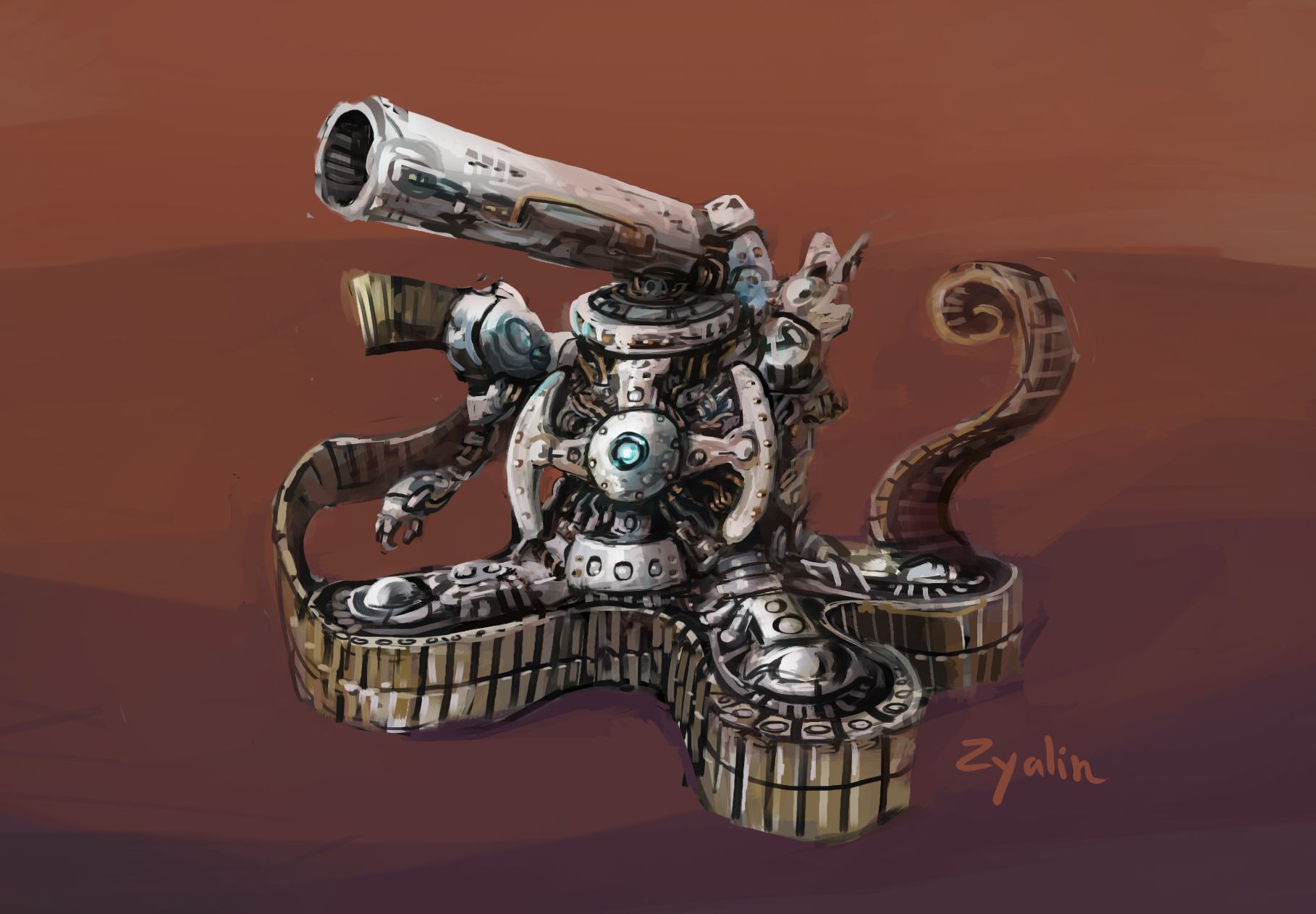 Yeah, this concept kinda came out of nowhere because suggested by patrons who came up with a bunch of ideas and voted on the new mechanic they wanted to see in Cogmind. The full list and voting results are here:

I like the idea of having a "siege mode" for treads since we already have conditional "overloaded" functionality with some other propulsion, but before now treads didn't have this and it provides new tactical options depending on your situation and capabilities.

In short, you exchange your mobility for combat buffs, becoming immobile but gaining bonuses to accuracy and coverage, with even some damage resistance.

Here's a demo of some of the relevant interface bits, showing how it takes time to enter/exit the mode (and during that transition you're more vulnerable):

There'll be a blog post that goes into more detail about the design process behind siege mode, all of the mechanical aspects, and even a discussion of the tactical implications, but I'm still working on that so I'll link to that in the next announcement.

This week I did already start streaming a new run using a nearly-complete version of Beta 9 to show off some of the latest features, including siege mechanics! So naturally it's a heavy combat run, that in combination with a so-called "crit-stacking" offense, which I've wanted to try for a while, and now is a good opportunity because enemy crit immunity has temporarily (?) been toned down for Beta 9 as an experiment.

Also as voted for by patrons (albeit from a list of potential features I provided) manual hack autocompletion got an overhaul to bring its behavior more in line with regular editor consoles, including even a selection menu to see the available options.

And my favorite part: it even works with schematics, listing all those valid at the current machine given the current depth, with partial name matching of course, and tab autocompletion.

On the part management QoL side of things, in order to facilitate swapping back and forth between two parts (which some people like to do before/after combat with certain builds), after a part swap between the inventory/attached lists, those two parts are remembered ("paired") so if you want to swap back that's always possible via the 'Y' menu option: 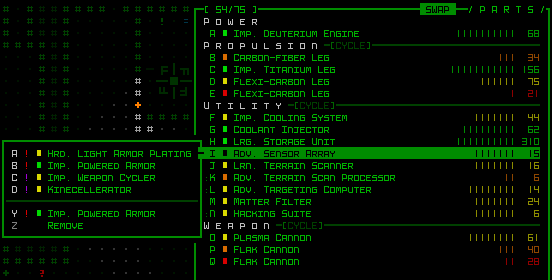 Here's a demo of the autopair swap feature in action:

And I don't imagine it'll get a lot of use but it was one of those "do it because I can" things: All remembered autopairs can be swapped simultaneously if you really want to!

I've already fixed all the known bugs from Beta 8--it's been a while so a lot of little things had piled up, but as always part of getting the next major release out the door means cleaning up any reports from the previous one!

The Terrain Scanner activation animation was unintentionally revealing the positions of traps via little blips. In fact, it was technically also revealing some internal script trigger points as well, which was how one player first discovered this! And then another player on Twitter mentioned that they thought the trap revealing was a feature xD. No this is totally not a feature, please use the other available means to detect traps rather than this rather tedious and non-Cogmind-like method! You see the blips in there?

Oops, the scanning list was revealing non-scannable prototypes by color even when unidentified. Fixed:

Lots of other little improvements here and there as well as I cleared out my TODO list for this release.

Parts ejected by machines now push away other parts, rather than rolling the ejected part over others.

Prop explosion data now shown in the scan window, making this more apparent without having to open the info window.

And we can always use new explosions.

You know how Cogmind's extensive scoresheets have always contained hundreds upon hundreds of data points to paint a fairly detailed account of that run's highlights? Well let's multiple that by... a lot.

The scoresheet format has been revamped in a big way, reorganizing all those many stats into more (and better) categories, adding a range of entire new categories, and significantly enhancing each scoresheet's ability to paint a clear picture of the run with history logging, automated build class identification, an ASCII map of the final surroundings, and even separating all those data values out into their per-map stats!

I've given this topic new "meta feature" in-depth coverage on the dev blog, writing a massive dedicated 4-part series on it, and as you'd expect, each article is packed with samples, diagrams, and detailed explanations.

Building the Ultimate Roguelike Morgue File, Part 1: Stats and Organization - Examining the process of developing Cogmind's scoresheet and its content as it evolves into its final form. 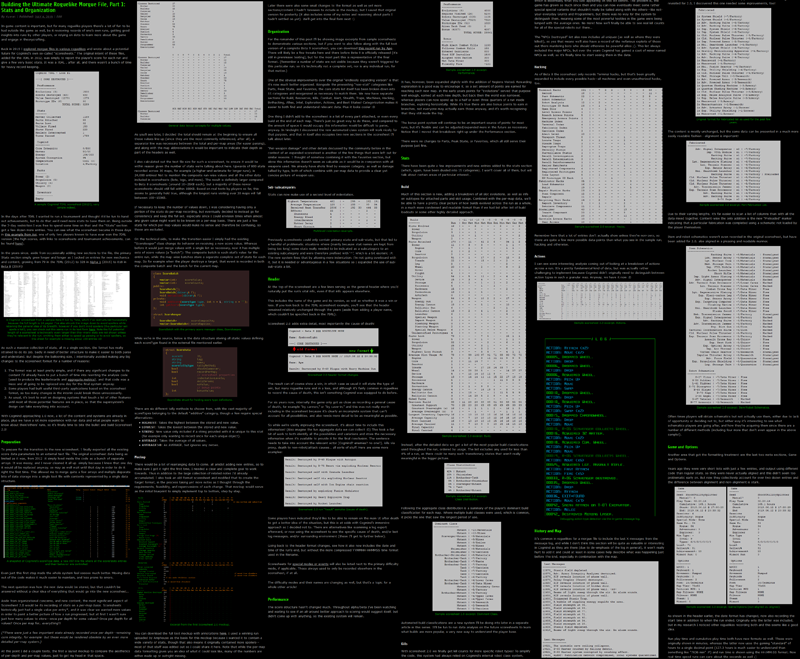 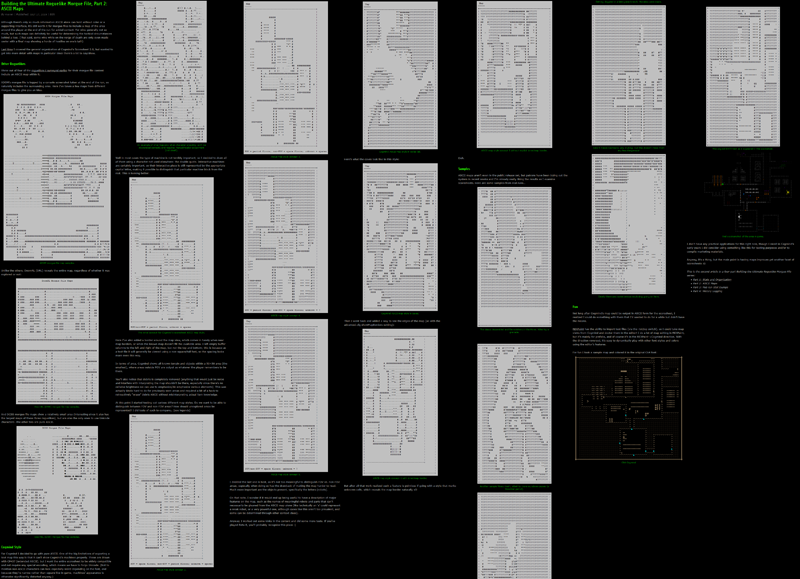 Building the Ultimate Roguelike Morgue File, Part 3: Mid-run Stat Dumps - Why and how I'm including accessible character dumps in Cogmind, including automated build classification and a situation analysis system. 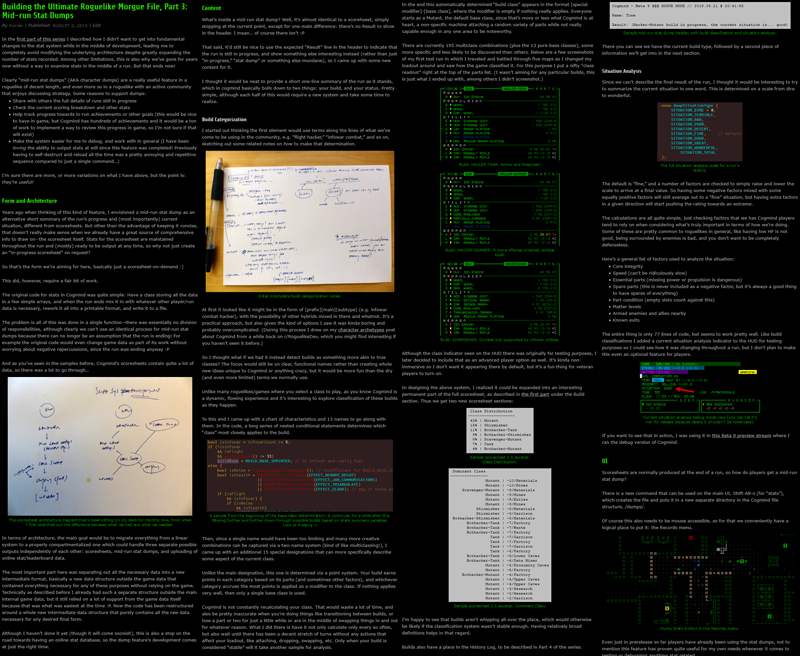 The Ultimate Roguelike Morgue File, Part 4: History Logging - Exploring the structure and content of full-run history logs as a way to record notable events in a roguelike. 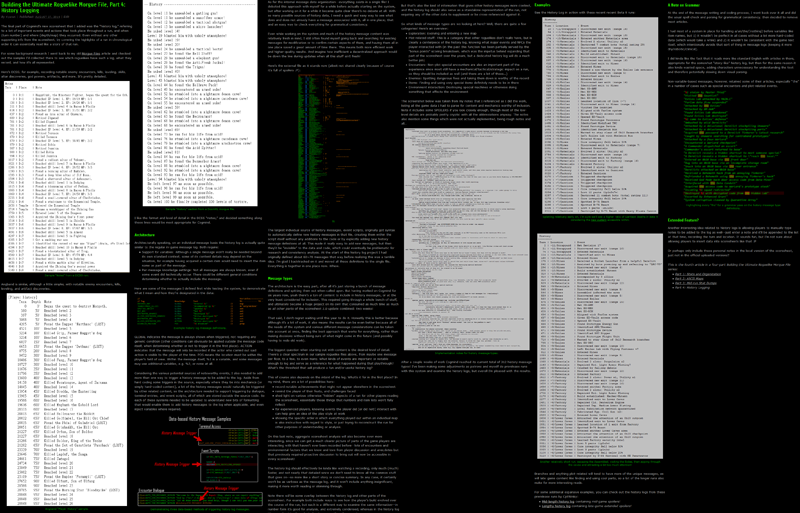 While on the subject of blogging, I wrote another article about Special Game Modes in a Roguelike Context, talking about stuff like their value and types. 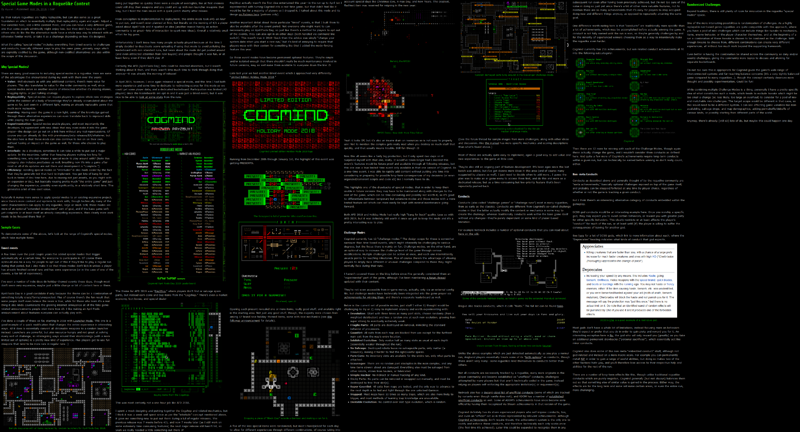 Another big change coming to Cogmind is the rebranding of difficulty modes, which I hope will help a lot of people. No more automatically defaulting to the hardest mode and calling the other two options "easier" and "easiest"--from now we have Explorer, Adventurer, and Rogue!

A lot of people don't even realize Cogmind has difficulty modes, and has for a couple years now, so that option will be front-loaded into a new menu seen the first time the game is run, before even the title screen:

Explorer/Adventurer modes even come with a convenient quicksave/load system, which I hope will help a lot of people better enjoy the game (Rogue mode will continue to enforce permadeath).

There is of course a blog post on this change, Rebranding Difficulty Modes, talking about design, reasoning, and player expectations. Another one specifically about the save/load feature will be coming as well!

Last time I reported that I'd begun streaming a flight run, which was eventually finished and made it into super spoiler extended-game areas. There were five parts in total, with the second starting here (you can find the rest from there):

I also did another streaming series of a run using the new upgradable RIF abilities. That starts here:

Zyalin drew our late-game build there <3 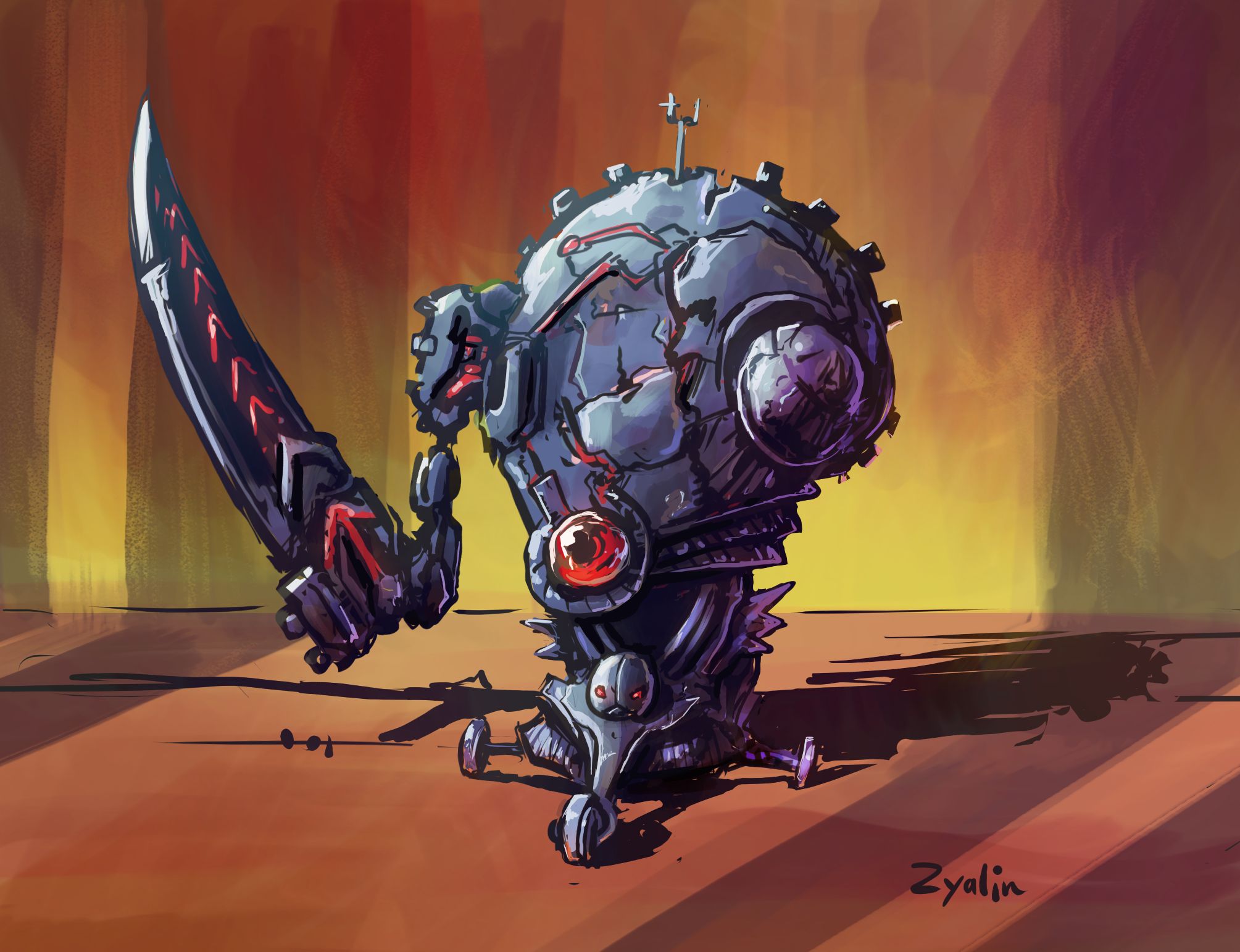 And at one point earlier in the run I was also crazy enough to continue along with rather high corruption and ended up causing a misfire to destroy the exact thing I was after--Zyalin sketched that scene, too xD 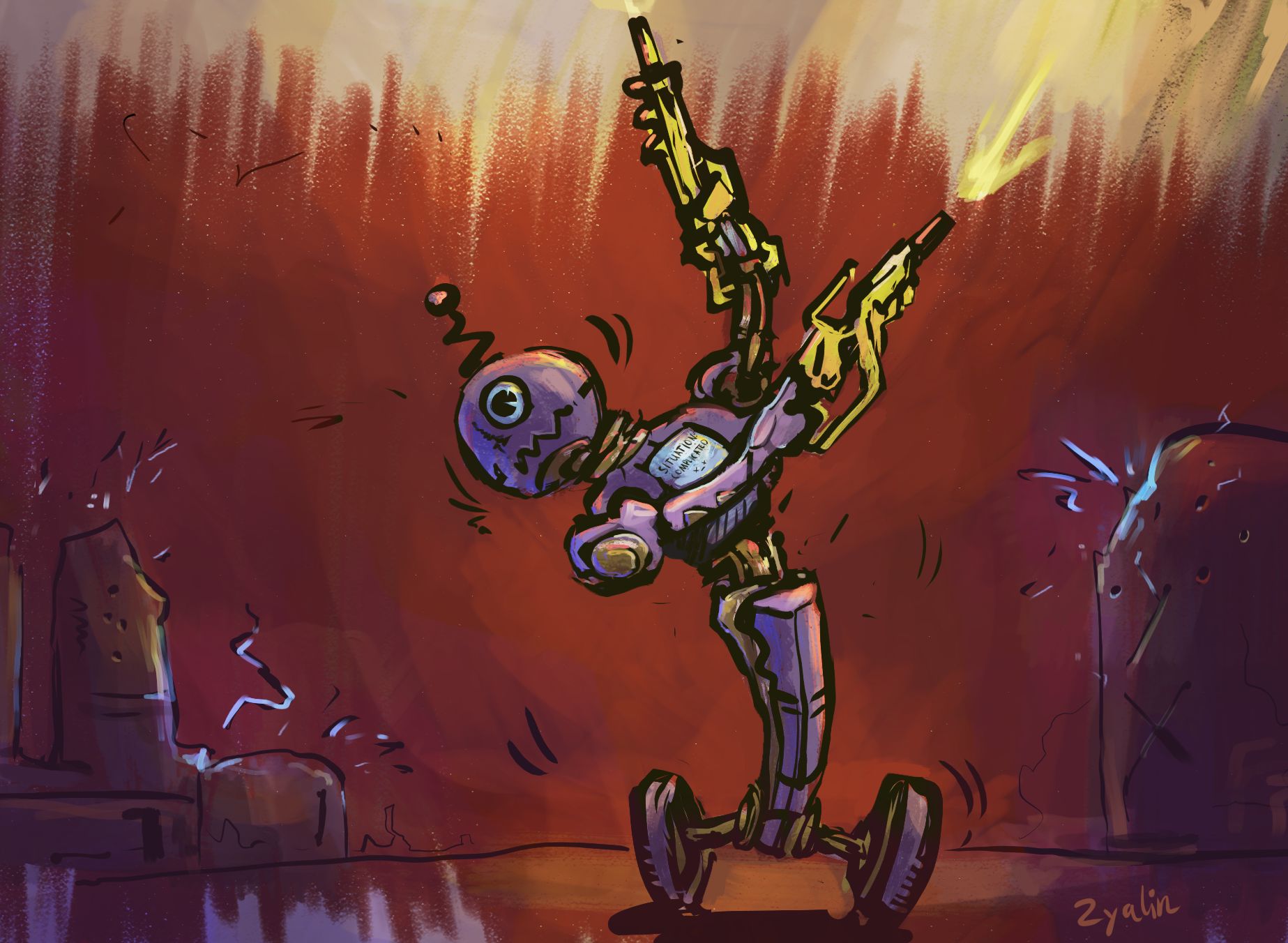 Of Course We Have More Art 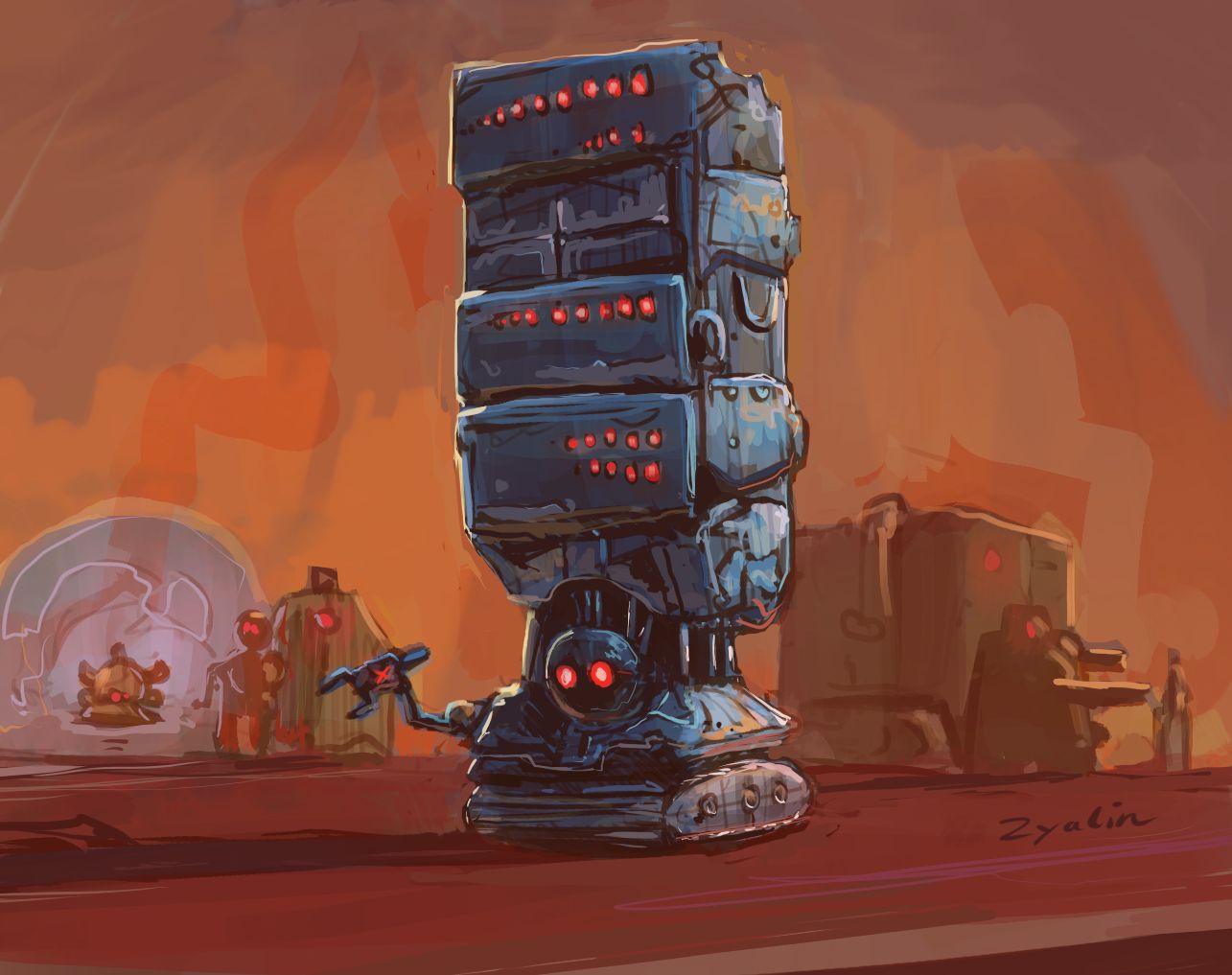 He also drew this... 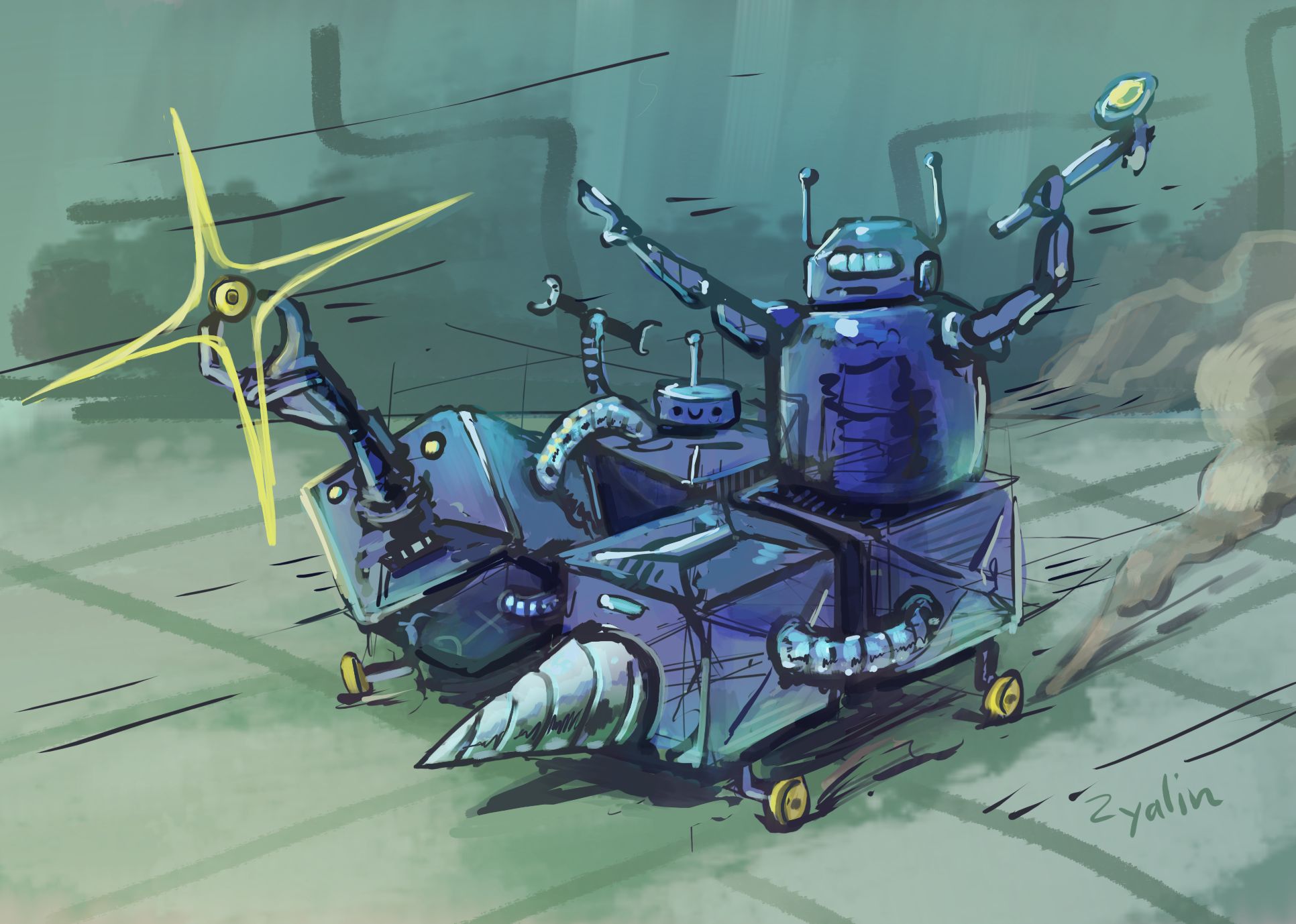 ...which makes more sense when you learn where it came from, the time in chat where I was fooling around with making Cogmind a 2x2 bot by changing a single value in the game, and... it actually sorta worked and was playable though the sprite became a conglomeration of several other non-combat bots as well!

Zyalin's imagining of a "combat version" of that particular NPC everyone loves to murder for their amazing hackware. 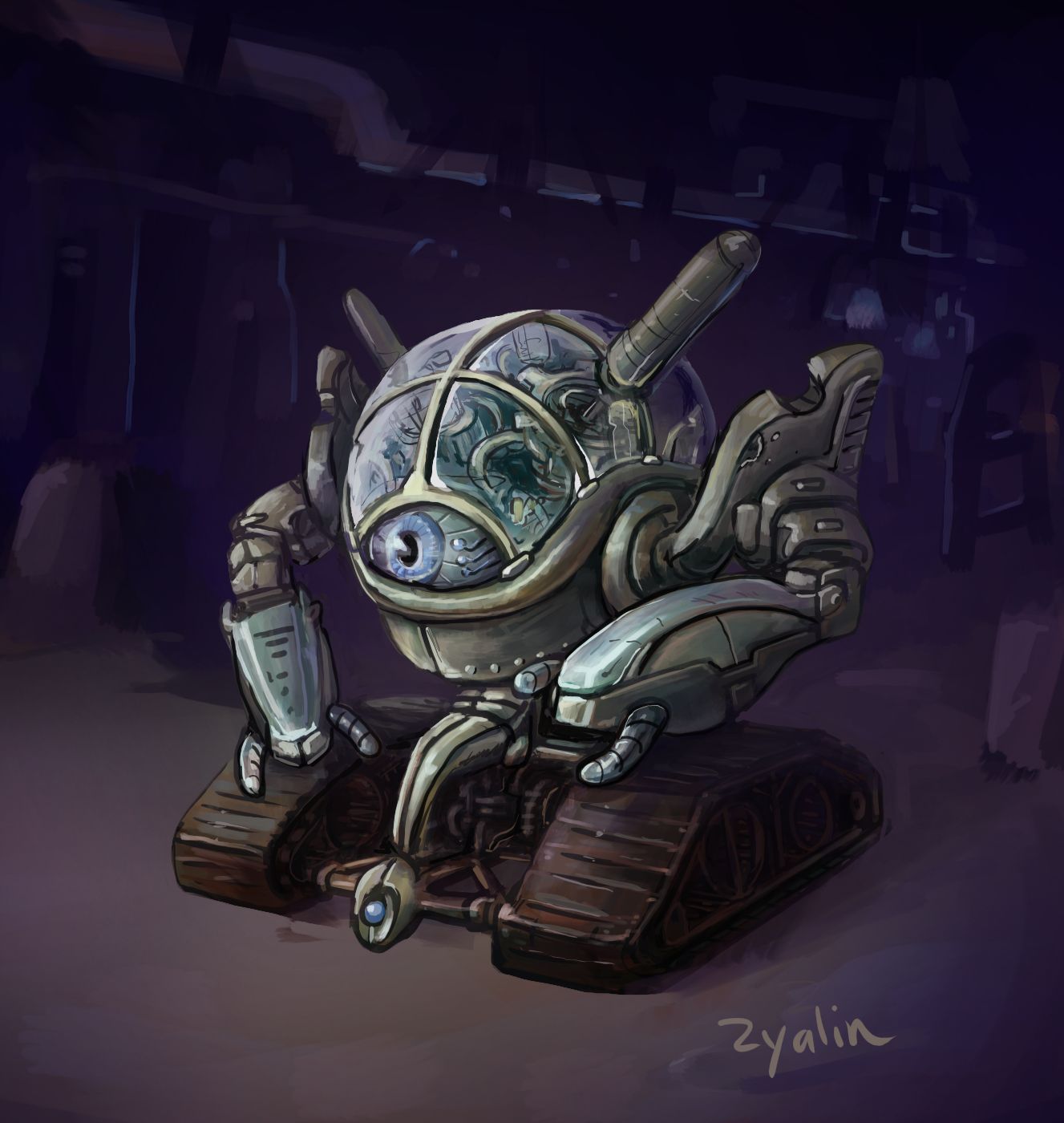 And I really love this piece, a huge thief-inspired bot that rips parts off: 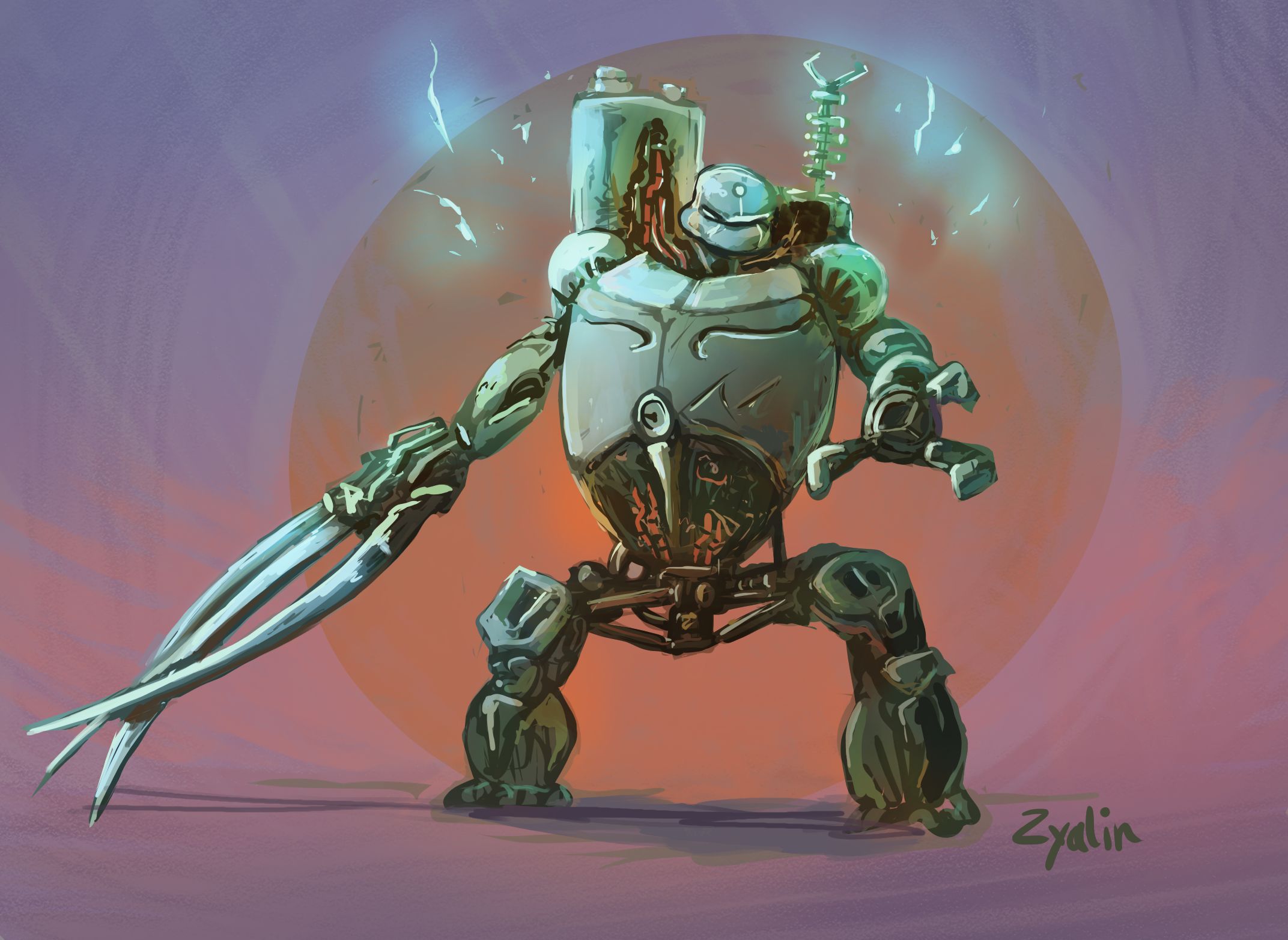 Zyalin has finally set up a website for his fan art of various games, including Cogmind, so if you want to see some of his other great work, and a lot of his past Cogmind pieces, check that out here. (Today's opening art is also a work by Zyalin, giving his impression of siege treads)

PlasticHeart, originator of the idea of "cogmics" (the 4-panel Cogmind comics now created by a number of players) has also collected a bunch of their past work on a new DeviantArt page here.

For his own "work of art," in July JakeThyCamel announced he'd been doing some wonderful work on an online HTML-based version of Cogmind's manual, filled with links and supporting screenshots. The conversion isn't quite complete (I'll bring it up again when it's done), but it's definitely getting there and worth checking out. 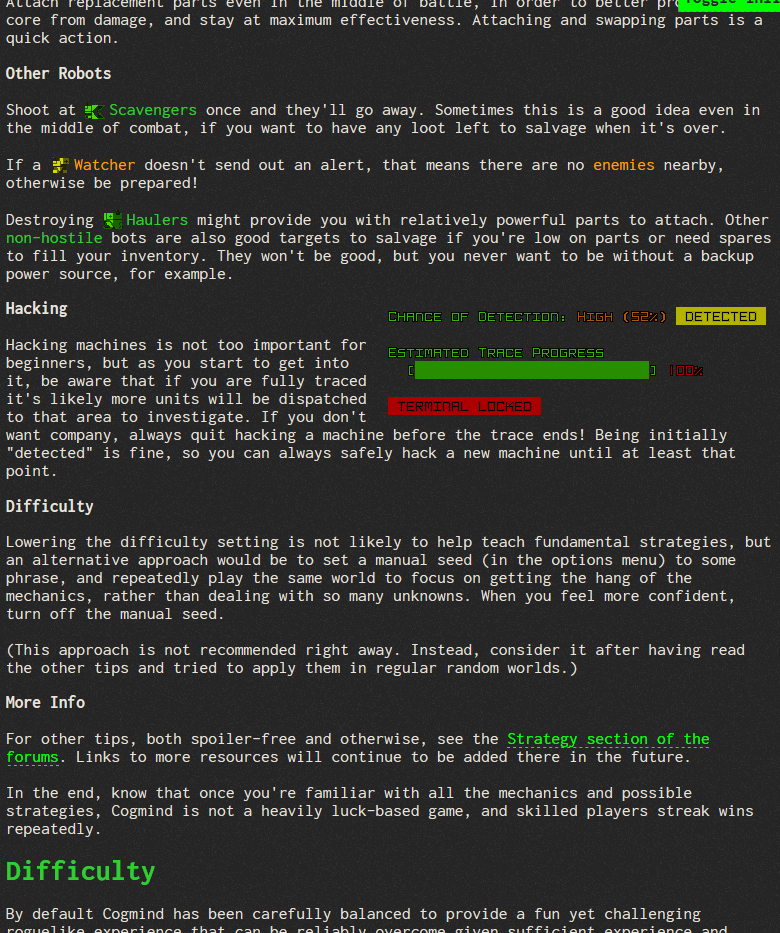 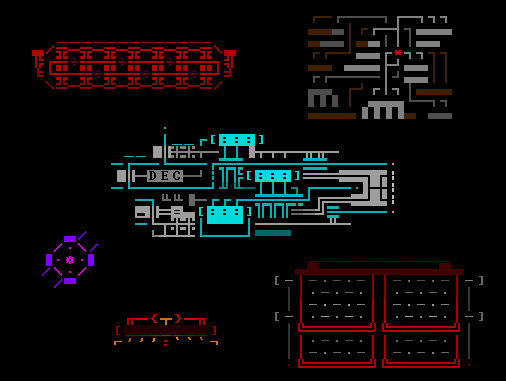 If you hadn't heard, this week Steam launched the new Library beta, and for that purpose all us devs had to make new assets to fit the new format. So if you opt into the beta you'll notice a couple things, one being the fact that quite a few devs have not updated their assets so the games don't show up very well, but assuming you own Cogmind you get to see this new box art in action :D 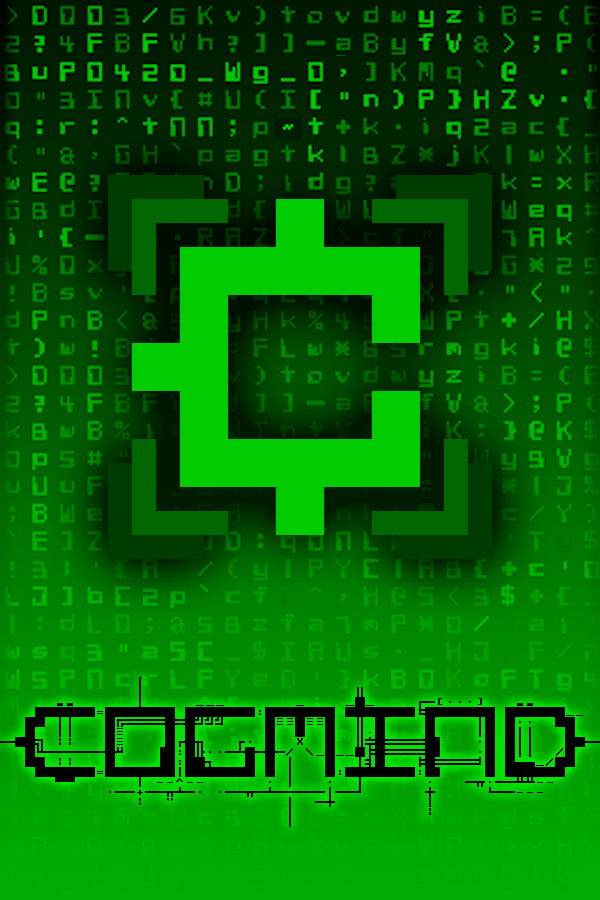 I made this and other new stuff a few months back when Steam first announced the upcoming changes, then totally forgot about it. It wasn't until players started showing me the game standing out in their libraries that I realized it was live :P 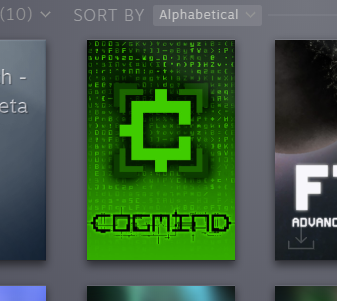 More recently I certainly remember the headache of suddenly having to go back through and migrate old announcements to the new system because I couldn't live with Steam automatically classifying all of Cogmind's previous updates as "small patches" :P. Cue hours of figuring out the system and creating new images in the right format! In the end it's at least a little more modern and less clunky than it was before (if we ignore the fact that comments are now harder to reach and see...).

Here's a couple excerpts from the editing view when I was working on that: 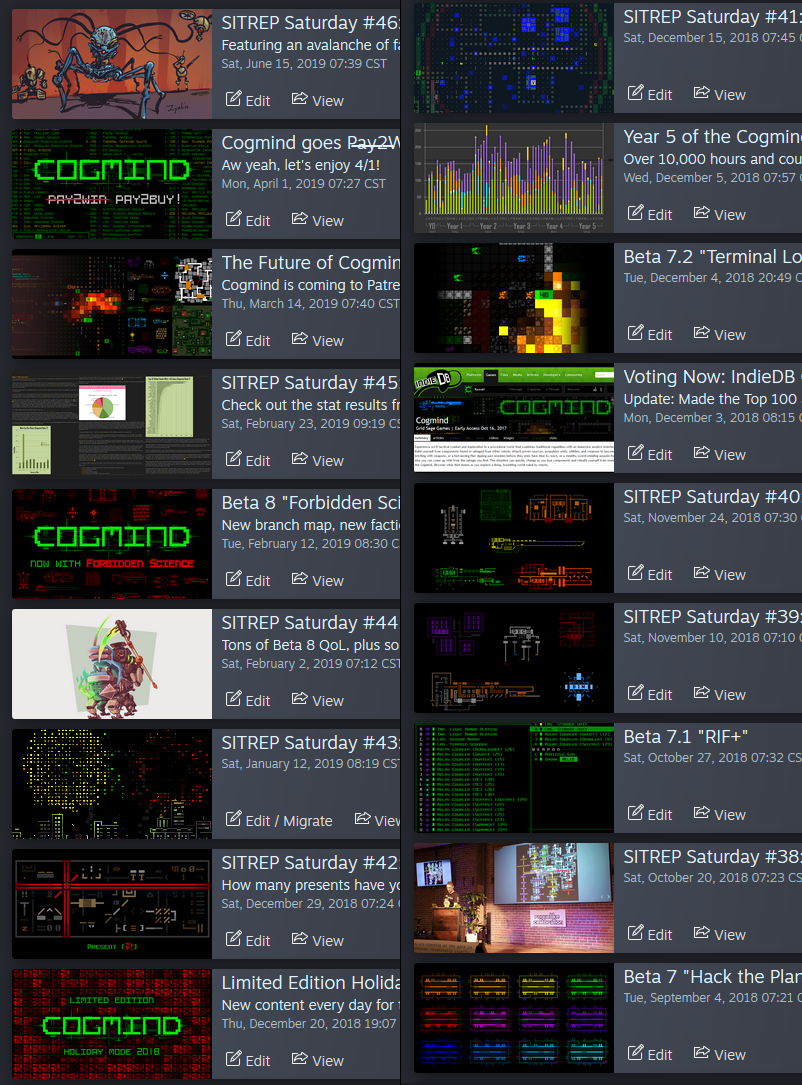 I'm quite happy that Steam integrated Proton and for a while now it's become even easier for Linux players to enjoy Cogmind via Steam Play. Cogmind is now rated Platinum in ProtonDB, so keeping the software super minimal and fixing those Wine-specific issues was definitely worth it :)

In less good news, the newest macOS is dropping support for 32-bit apps, which will mean those on the new system might have a harder time running Cogmind. I believe it'll technically still be possible, but you'll have to approve it or something like that? Or maybe because Mac users are already running it under some form of emulator anyway it might work? Not really sure about these things I guess we'll see.

Wizardry on the Horizon

No date for you yet, but the only feature remaining before it can be released is the database and leaderboards side of things, and while not every one of its features needs to be ready immediately, 1) it's important to lay a good foundation and 2) the basic version definitely needs to be functional for the Beta 9 release because I want to see the initial usage of the rebranded difficulty modes given the new menu and related features.

I can't be too sure about the timeline because I have someone else helping build it--I normally work alone but this is outside my area of expertise so that wasn't really an option here if I wanted it done well :P

In any case, regardless of when Beta 9 is done, a longer dev cycle just means more time to throw in extra little features and content before it's out!