The crafty Hephaestus gets the spotlight in our latest development update.

Hi there and welcome back to the best blog ever*!

Among the many things we have working on these last weeks, we made a full review of all the boss battles in Okhlos. We playtested them, took notes and then discussed what was working about them, what wasn’t and what we could do to improve them. It’s a lengthy process but a rewarding one. So we want to show you how we do this. And as a example, we chose to tell you about all the changes that one of those bosses has undergone: Hephaestus.

Remember him? We introduced him back in one of our very first posts about the game, where we showed you the main antagonist in Okhlos, the hateful twelve Olympian gods. Hephaestus is Hera’s son, Aphrodite’s husband, and the god of blacksmiths, artisans, craftsmen, fire and volcanoes. He made all the cool weapons and gadgets the other gods and some heroes would wield, and he even made living machines, like the bronze giant Talos. All in all, a impressive chap. But back to the game.

By the time of that post about the Olympian gods, we had already sketched out how Hephaestus was going to look and what he was going to do. It was very simple. He would have an area melee attack, which was smashing everyone around him with his hammer, also a ranged attack, throwing a lava boulder, and finally he would summon automatons, because he made them and lots of them lying around.

But things couldn’t be so simple. After implementing a first version a playing a bit we found out that the battle against Hephaestus wasn’t as fun as it could be. One problem was that the combat ended up being too static. Asides from the melee attack, which you could block, there was really no reason to move the mob. The best strategy was to swarm the god and keep pounding on him, ignoring any of the enemies he summoned and never getting far enough for him to use his ranged attack. Not that much fun indeed. Hence, a new version of Hephaestus was born.

So we had a boss battle that was too static, and a god with two thirds of his attacks rendered useless by the most simple of the player’s tactics. What’s the first thing to try if a battle against a boss is to static? Making him move! Right? Hephaestus already did move around the level, slowly, but he moved. So, make him faster? For one part that didn’t fit the theme, Hephaestus was supposed to be a crippled god, strong but not particularly nimble or agile. We even made him with a cane! But asides from that, if we made him faster the player would simply spend more time running around him, which was not particularly fun either. 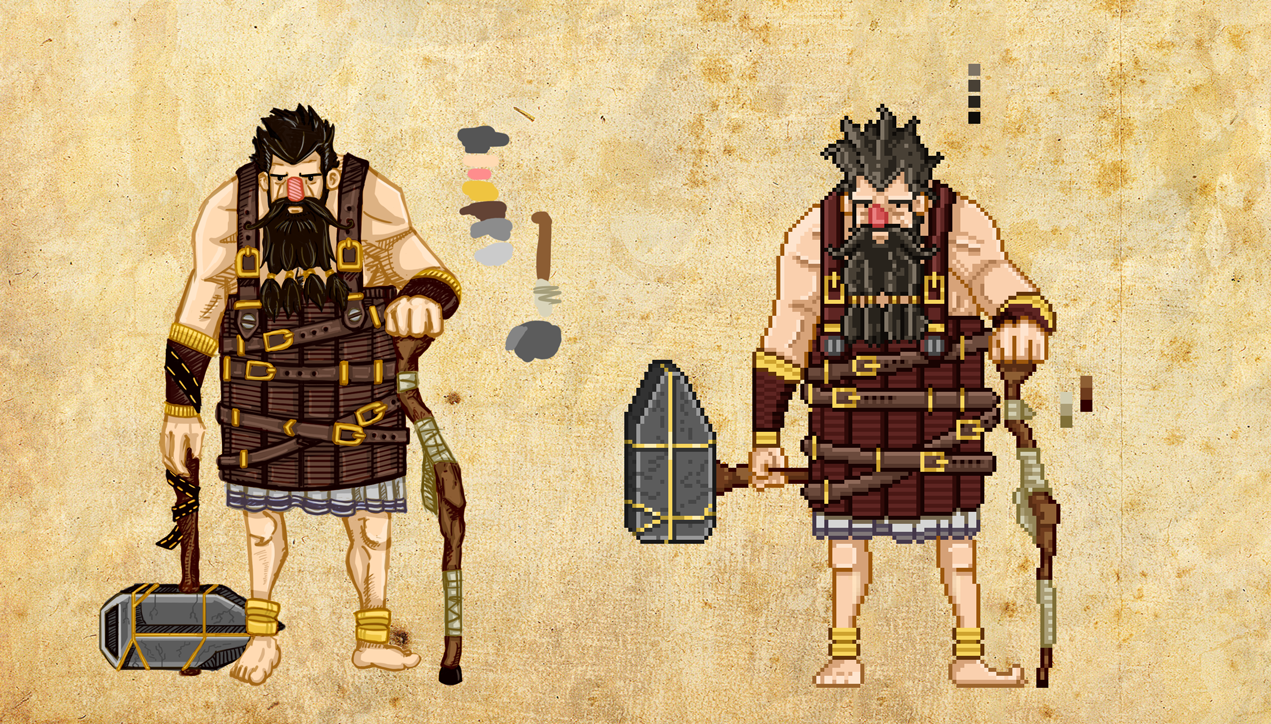 The solution we came up then was to set up a safe zone inside his arena, where he would go to summon his automatons. The area would be outside the mob’s reach so he could spend all the time he wanted invoking minion or preparing devastating ranged attacks. A classic villainous move! Leave the battlefield for a while, let your underlings entertain the heroes and then came back for a new round of evilness. Perfect!

Or not. Even though this solution did work, and fixed the main issue while Hephaestus was in his safe area, the rest of the combat still felt pretty much the same. It now had a nice change of pace when Hephaestus went away to summon minions, but we set out to improve it even further. A new version was on the way.

Around the time we were working on that version of Hephaestus as I was playing Titan Souls, an amazing game, as are all game published by the wonderful folks of Devolver Digital (blatant cross promotion – blatant cross promotion – blatant cross promotion). One of the bosses in Titan Souls is Vinethesis, plant-like creature that sits at the center of the level and spins around its spiked vines around. This boss seemed to have a problem similar to the one we faced with Hephaestus. The optimal way to beat him was to stand still and way for the right moment to shoot. However, the devs had came up with a way to make the player move. Vinethesis summons a cloud of poisonous spores that follows the player, and kills him if he stands still inside it. 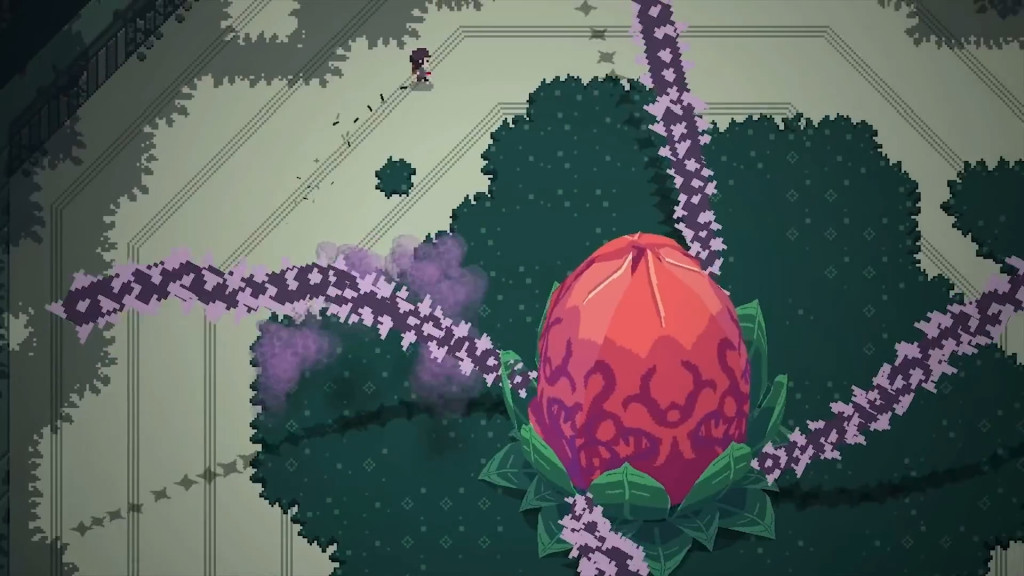 The battle against Vinethesis in Titan Souls

It was a great idea! So let’s rip it off I said … err… I mean, let’s pay homage to the great game by implementing this great solution to our problem instead of resorting to other boss fight’s tropes. And so we did. We made a cloud of flames and smoke that slowly moves toward the mob, damaging any person (or animals) that comes in contact with it. If the mob spends too much time swarming around Hephaestus, the cloud will move over him, providing him with the cover he needs to bring some minions or use his ranged attack. Sweet!

And so everything was fine and we retired to an isolated Caribbean beach where we spent the rest of our days sipping cocktails and playing cards with an old fellow named Chachingo, right? Nope, we kept on playtesting Hephaestus battle and came up with a couple of things to improve. A new version was on the way.

You remember that Hephaestus had a ranged attack, right? Throwing lava boulders at the mob? Well, up until now, Hephaestus wasn’t really able to use it that much, so that attack never got the chance to shine. Once Hephaestus started using it we realized that the attack had some issues of its own. No shining for you.

First there was the problem of where to get those lava boulders. When we planned it we thought that since he was in a volcano level, he could just grab it from anywhere, but digging up some lava from the spot he was standing didn’t really look very well. Neither was a good idea going all the way to lava rivers at the edge of the scenario each time he wanted to make ranged attack. After a few tests we decided to go in a different direction: Hephaestus wouldn’t dig up chunks of lava to throw any more, he would now invoke a meteor shower to rain upon the unsuspecting mob. Same as effective, twice as shiny and godly. 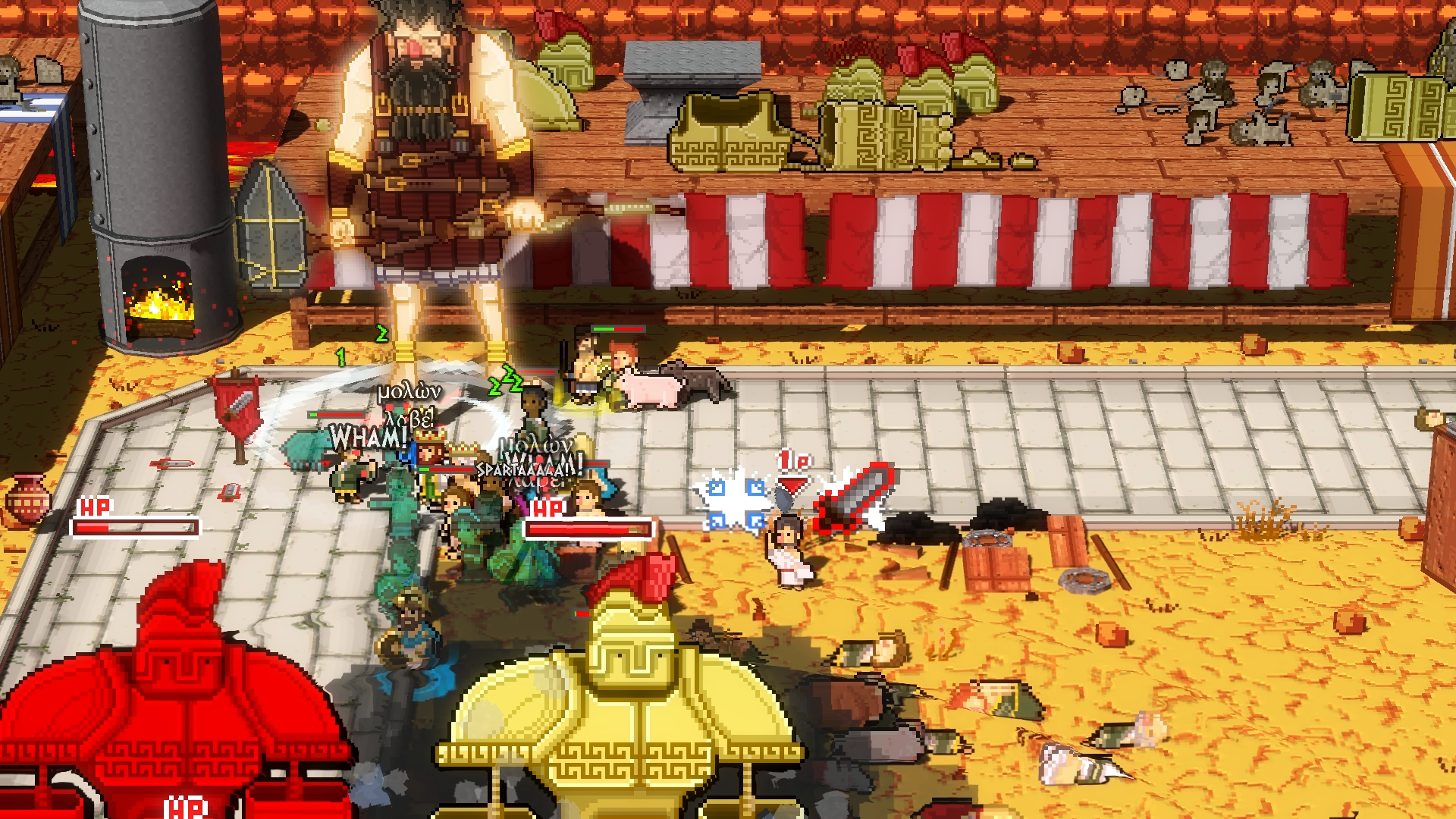 The other thing we changed in this version was how and when the smoke cloud appeared. At first it was almost an autonomous entity that was there in the level, it spawned when the battle began and stayed there until you defeated Hephaestus. What we did now was integrating into Hephaestus attacks. The cloud has finite lifespan but Hephaestus can summon another one whenever he needs it. Not a huge change but something that makes things more interesting.

And, unless I am forgetting something else (which is entirely possible), those were all the changes that Hephaestus has been through until today.

Is this the end of the story? Probably no. We’ve just started the closed beta and started getting feedback from players so we will probably do a fifth version, perhaps even a sixth version! But we wanted to show you a little about the iterative process of designing the bosses in Okhlos. They have always been one of the biggest challenges in the development of the game so we want to make them as best as possible.

*about the development of a ancient-Greek-mob game

I like thoose articles so much! Keep it going, and good luck with developement!