Knights & Legends, is a medieval experience unlike any other. A game influenced by espionage and intelligence elements. The game also features challenging sword and shield battles, with some relaxing horseback riding moments in between. 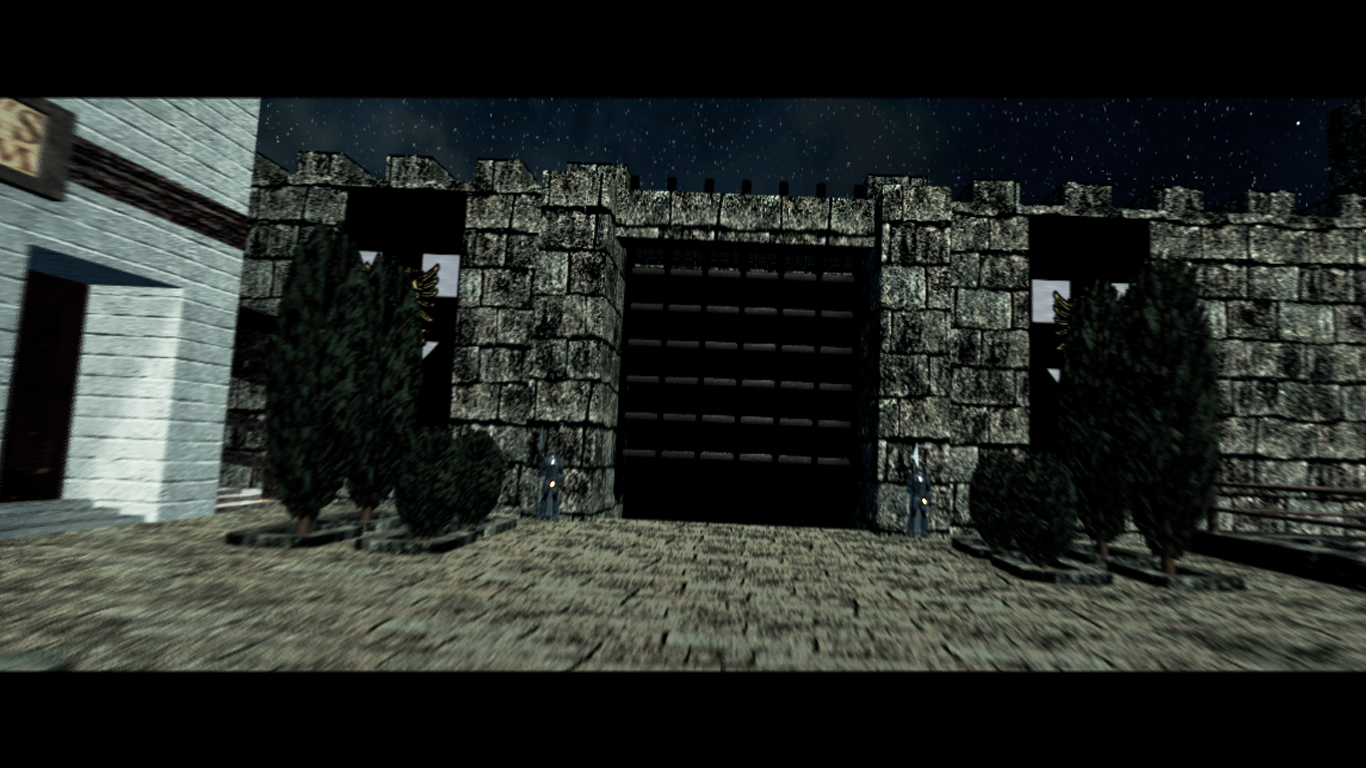 Our hero arrives at the kingdom of Vancroft. It's a moment of joy to all! For me, to be the first tabletop rpg writer to port his game books into a fully developed 3D game in the history of gaming is a very unique and remarkable experience. Although, it's a fact that this accomplishment may remain largely underappreciated for decades, but it sure deserves its place in the history of gaming.

For those who are new to Knights & Legends: Dawn of a New Age's game updates, I give you a warm welcome and hope you enjoy future articles showcasing the work in progress. K&L: DNA is currently being developed for PC & MAC computers with a release date still to be determined around the coming year of 2022. The game's development state is currently in Early Beta.

ABOUT THE KINGDOM OF VANCROFT 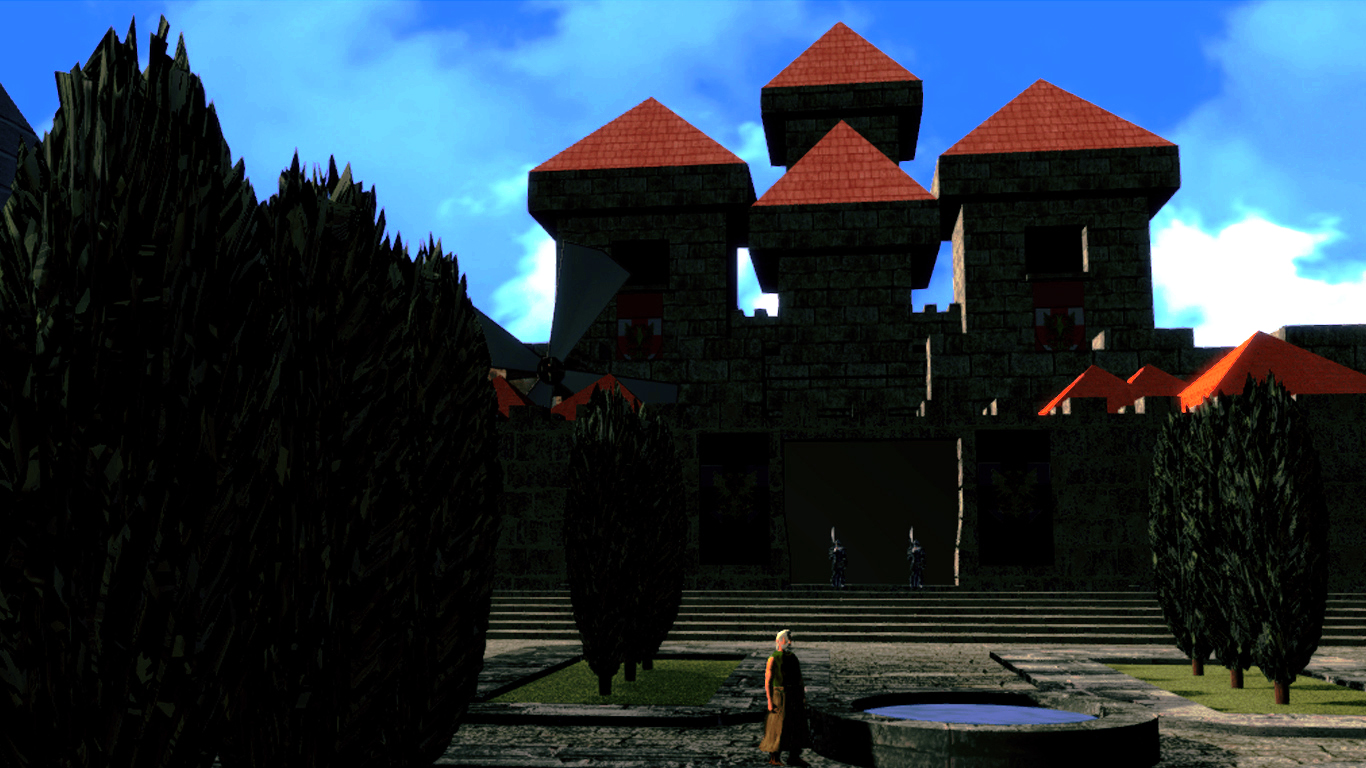 Nearly a month in the making, Vancroft is the dominating country in the western continent of Etheros. Vancroft's history is one of war and bloodshed. The kingdom engaged in militarism to dominate the western continent as a whole. It wasn't until a few years ago that the Dwarves declared independence from the majorly human nation of Vancroft. And so creating the nation of Lindfell, passing their on laws from scratch.

King Alexander Draconis, is the sovereign ruler of the kingdom. By the time you reach the city things will be a little chaotic. An active shutdown is in progress, an assassination attempt was made against the King's life!

In Vancroft, you'll find lore immersive characters (NPCs) who will further expand the story and set the mood for the remainder of the game. Knights & Legends is a medieval experience unlike any other. It's influenced by espionage and intelligence elements. There's plenty of sword and shield action, along with horseback riding, plus plenty of city and outdoor exploration as well. Vancroft for instance can be explored all the way from its homes, buildings, to the dark alleys and gutters within.

You will encounter remarkable quests and puzzles. These quests, have real thought put into them. This way the game stays loyal to its ancestors from the past. A time when questing meant something other than fetch, deliver, rinse, repeat. As a poor Templar of the Xhinian church, your goal will remain focused in the main story for the most part. Money is not a main factor in the game. More on that will be covered at a later update. 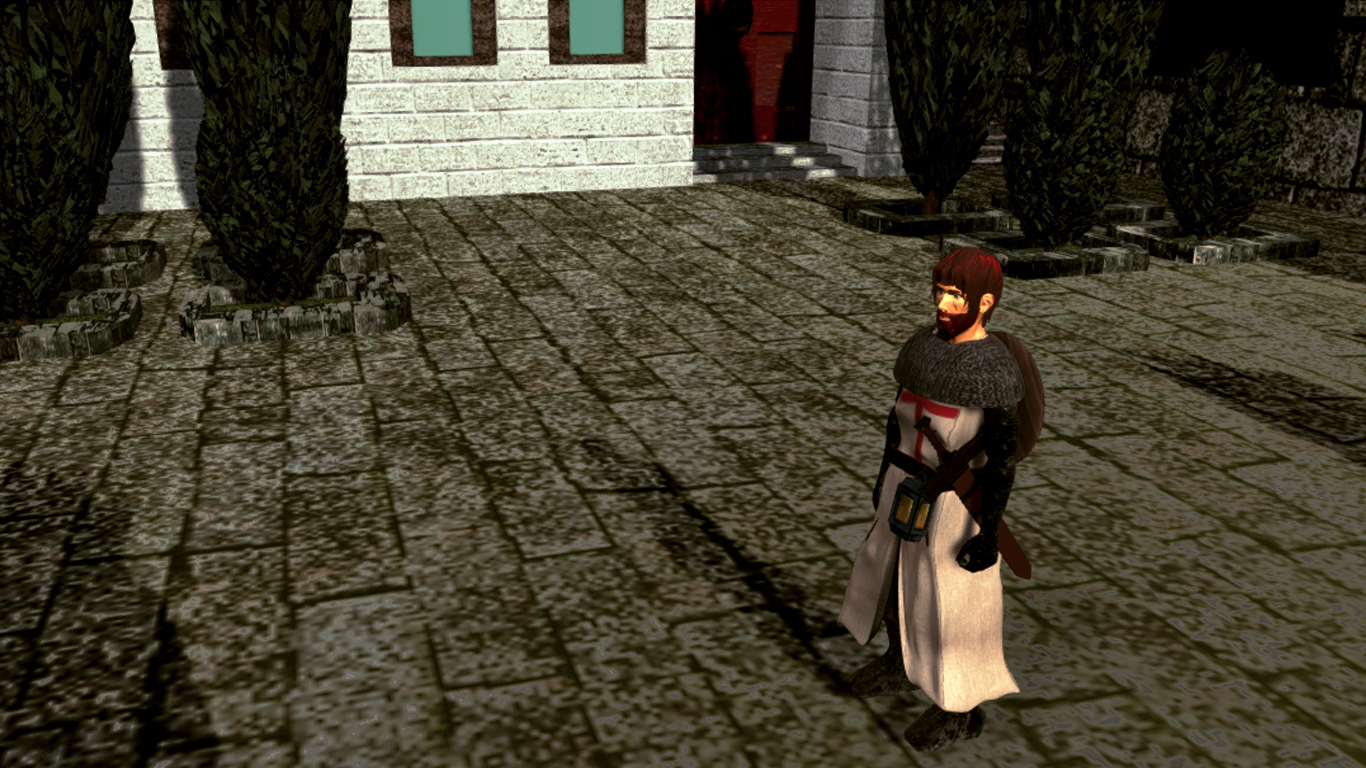 Exploration is a recipe found in many successful RPGs. K&L: DNA, gives you plenty to explore. There will be story driven moments in which you may feel railroaded, but there will also be times that the world surrounding you will be available to explore. What the game tries to accomplish, is perfect balance between story and exploration. A very long story, may feel draining if you don't immerse yourself with its main goal or lose track of it as a result of doing so much random exploration. You then completely detract from the main story, eventually losing interest. K&L aims to tackle those issues by keeping you on the goal, with limited freedom, but not completely railroaded. The game will keep you guessing "what's next?" constantly, and advancing through its story will feel natural and rewarding. 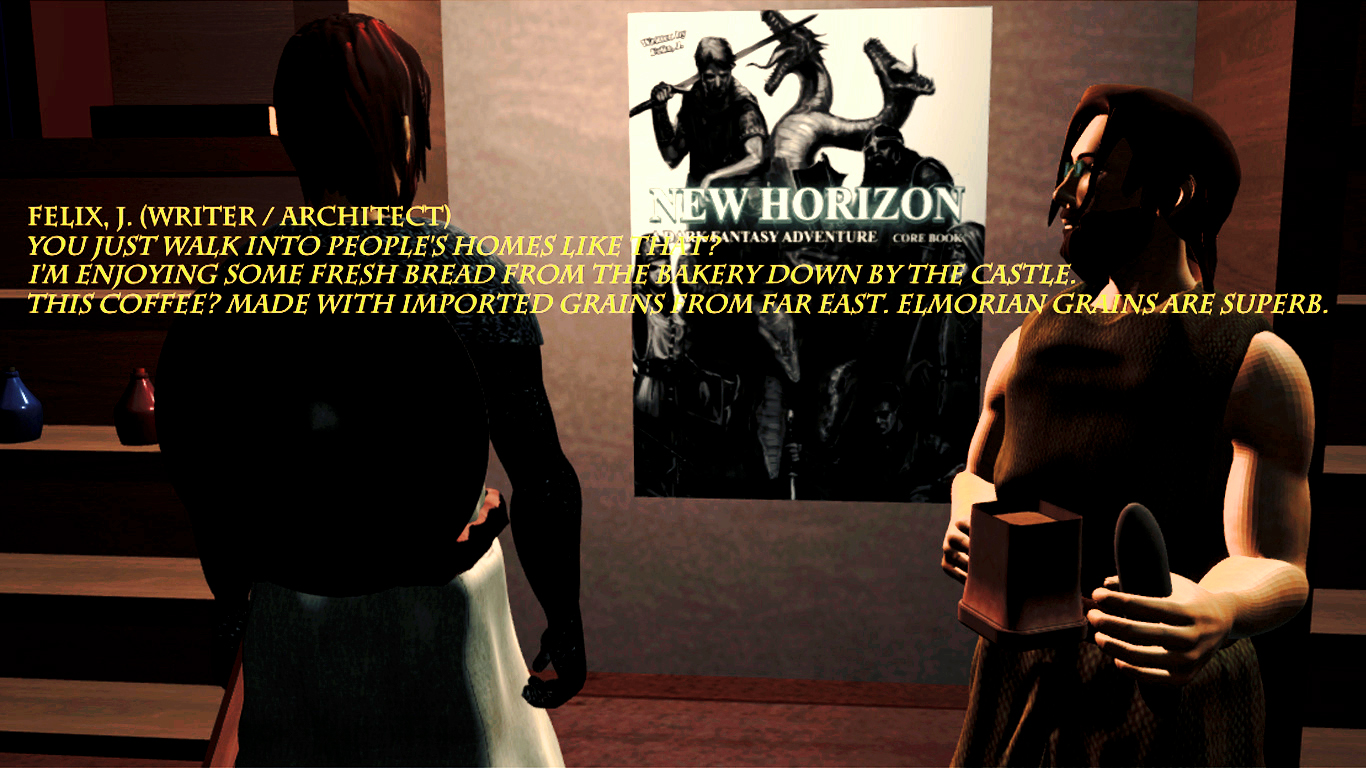 You'll briefly see me in the game

A little cameo of myself and my previous book, in the form of a painting hanging on the wall, is included in the game. I know not a lot of Devs do it. Sometimes they're shy, others thinks it's egotistical. Here's a quick fun story on why that came to be...

I grew up playing Hideo Kojima games. I had no clue who the man was until the early 2000's. Always loved the MGS series with its weird sense of humor like hiding in a cardboard box. Everyone knows it's stupid! But very rewarding to see.

When MGS3 came out, that's when I really started noticing Kojima's vision as a game developer. Today you can tell the difference between a game made by Kojima and a game that wasn't made by him. Movie-like game's are his key signature, you may engage in silly acts here and there, but the story remains incredibly suspenseful and immersive. Without a credible story, a game is dead on arrival.

If you've played his games, with the exception of Silent Hill 3, I think all of them have some sort of cameo where you either encounter him directly or indirectly. He's never a main character or relevant to the story, still it remains pretty rewarding to go after these Easter Eggs. You'll see the same in Knights & Legends: Dawn of a New Age. 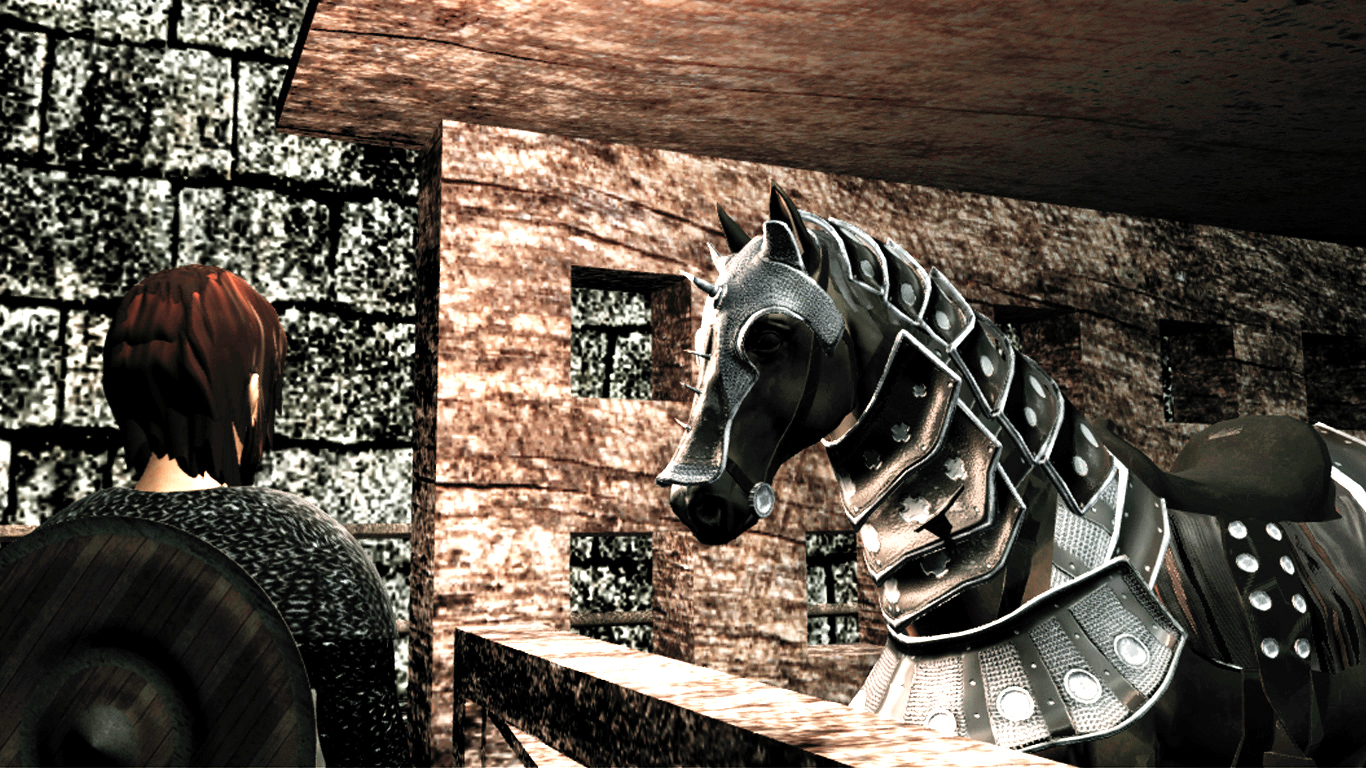 Yes you get to ride it!

Later in the game, you'll be able to move around a little quicker with a bit of horse riding. Some of these beauties are battle ready, featuring cool customized armor like the one seen in the picture above. I'm currently considering options to include Jousting as a sport in the game, as well as a coliseum. As development advances, I'll look into seamlessly integrating these two options in the story. 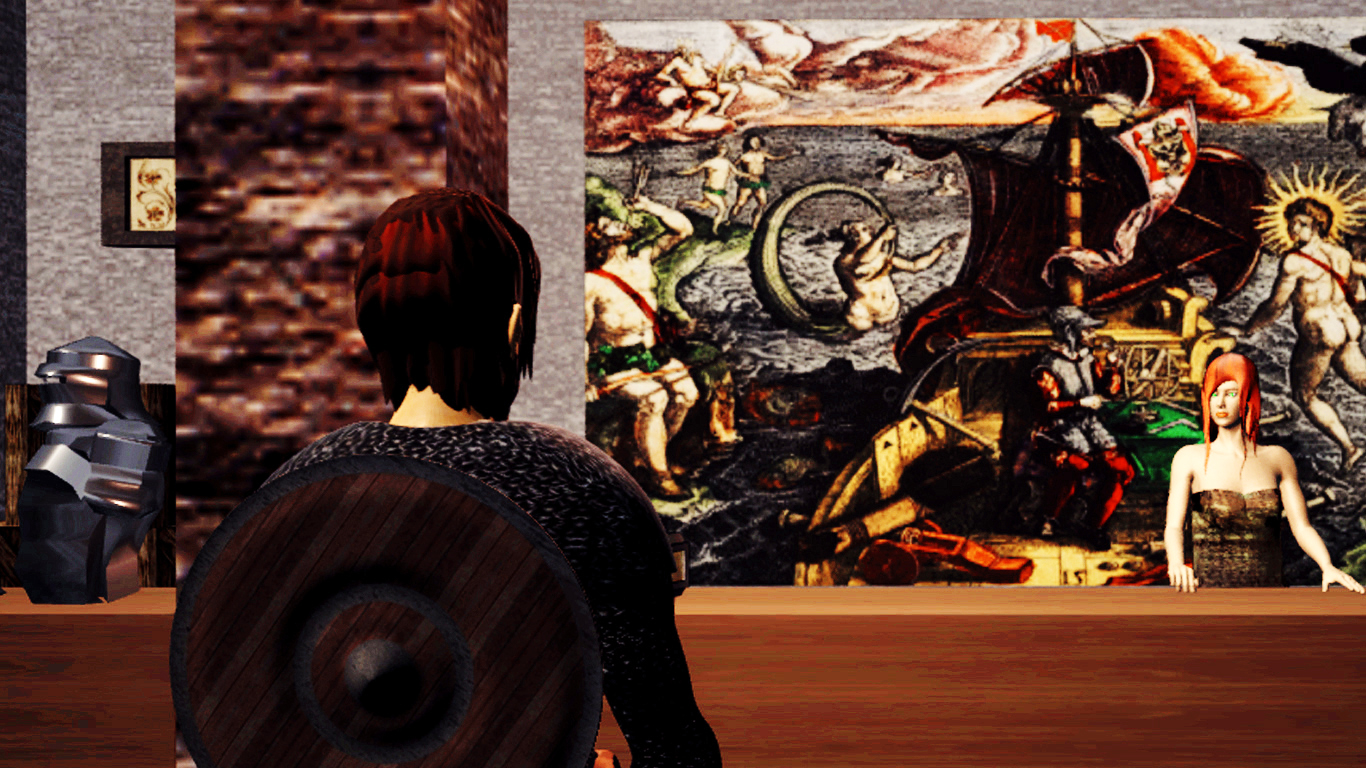 Another very meaningful improvement made to the game is the new collision camera. This new camera stays off walls and doesn't go through objects. The camera will pan a few degrees to the player's left, right, top, bottom as needed to avoid obstacles it could potentially clip. This new addition gave the game a professional key featured encountered in all respectable AAA games. It's basically a smart camera that dodges and focus on demand while keeping its attention on the hero at all times, without the need to constantly maneuver or adjust it. (Painful to code and calibrate!!!) 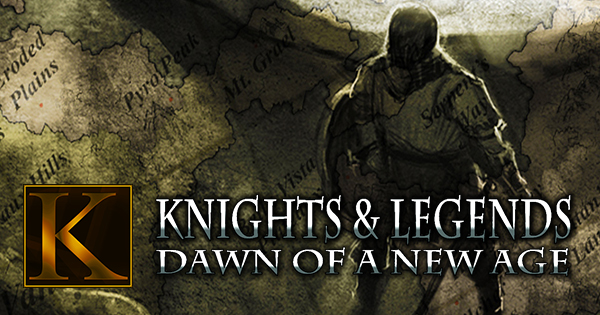 Dear friend, I hope you have enjoyed this article. Knights & Legends: Dawn of a New Age is a miracle game that in theory should not exist. Funding for the game is tight! You can help support this title by contributing today. Your donation will be used to further enhance key features, along with original soundtrack, 3D models, length of the game, and many other key features. Head to the game's IndieGOGO page now before time runs out!

Don't forget to follow Knights & Legends Dawn of a New Age, to be notified about news and updates first. I'll see you in the next article! :)