The fourth installment of the development progresses of 'The Hunt for Slenderman' showcasing new and removed features as well as screenshots.

Hi everyone! I hope all is good. The last 'development progress' news post was back in October 31st where I showcased some game features planned for the game and also when an Alpha might be released. This news post is a follow up to that one showcasing the updated features of the game!

In the earlier but unpublished versions of the game the player had to make choices and that choices was either good or bad. Even though it provides excitement to the player, it turns out to be a little bit linear. This time, the player will have more freedom in what he wants to do and there is no good or bad choices this time, but each choice that relates to the story line will have a different impact in the end. Also, thanks to the freedom of choice feature, the player will miss certain stages in the game, providing a second play through for the player.

Also relating to the old 'good and bad' choice feature, was the ability to hide from Slender. After some thought, it might be possible to get away from Slender but really, it's not possible to hide from him. Even though hiding from him is a bad choice but I prefer that the player doesn't have the ability to hide from him, it just doesn't feel right! But you can get away from him though by finding a route to escape in the chase scene's.

Again, relating to the 'good and bad' choice feature and chase scene; if you made a good choice then Slender goes further away but if you made a bad choice then Slender get's closer. This time though, Slender only comes closer every 30 - 40 seconds in the chase scene so you better act quick to get away from him. Note that the timer length might change in updated versions of the game. 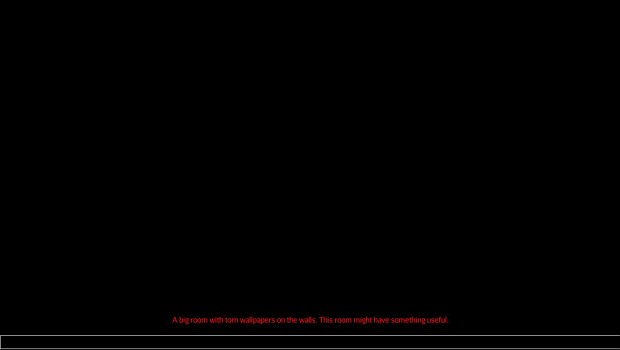 Image above indicates that you're in a room and you can't see Slender.

5. I better take a look around.

One of the text based features added is the 'look around' feature. Simply by typing in 'look around' will give more of clear indication of your surroundings helping you progress further into the game without wondering what you should do next. 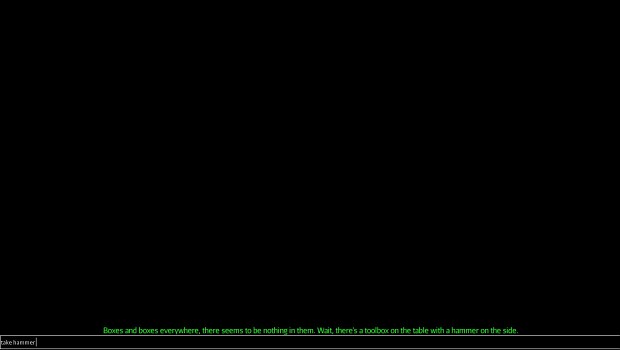 The image above indicates that you can pick up the hammer lying on the table...

As one of the promised features was the capability to view images in the background. When in a certain area's where there is images you can look at, typing in text that corresponds to that image will display it on your screen. In the example below, I typed in: 'look at first image' and just like that, it displayed the image without a hassle. 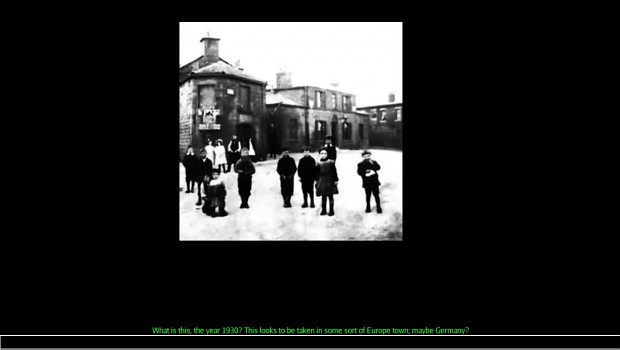 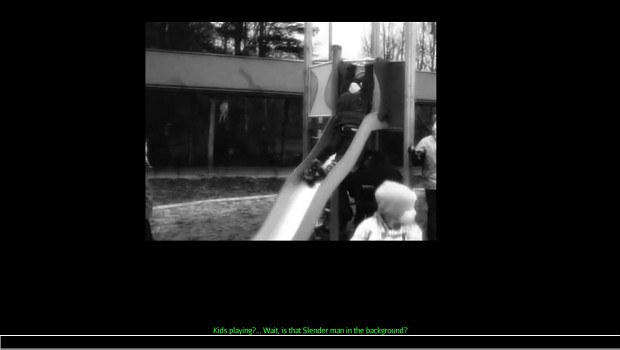 And I say it again, you ain't seen nothing yet! There's so much improvement to be made in this game and so much more features to be added too. And yet, I've only worked on the first chase scene that you might miss when making a major choice in the game. The game is not about good or bad choices anymore but rather the ability of making your own choices! And like I said, chances are you might not even reach the first chase scene, making it possible for a second play through.

And don't forget, you will still have ability to go to the different nations and investigate all the occurrences people had with Slender, making this game extremely story driven with at least 6 hours of gameplay!

Do expect an Alpha in the next few weeks giving you the opportunity to play this short chase scene that will overtime be improved into a bigger chase scene! Remember, this will not be the only chase scene in the game.

I've worked so hard on this game and it's still very far from completion but I'm glad to say that I improve the game each and every day. And as I mention each and every time I add a news post, feel free to give suggestions, I would like to hear them!

To everyone, have a good day!