Learn about all the major updates from the game’s development, since it’s early access release on Steam in May earlier this year. 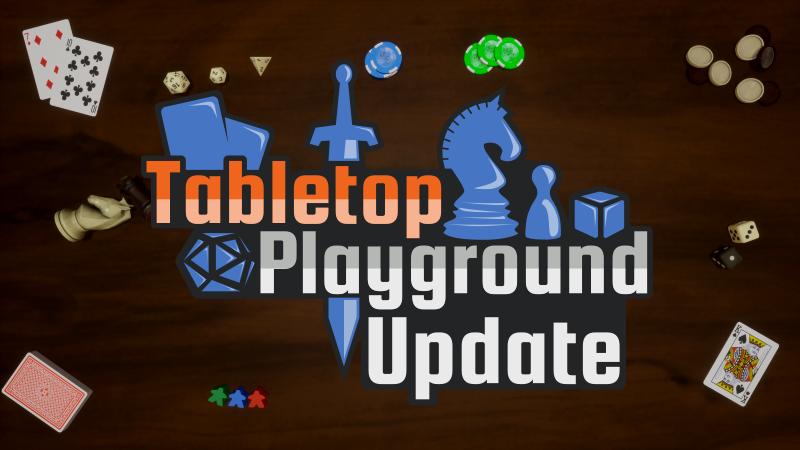 Welcome back to our monthly development updates for Tabletop Playground! It's been a month and a half since the game launched on PC in Steam early access and we've been busy working on the first features on our public roadmap.

Two big updates we've done over the past month, have revolved around further support for virtual reality devices and enhancements to cards. Check out the details and full change-logs for both updates below.

Enjoy full support for Valve Index controllers and other motion controller types, along with improvements to some of the button mappings and more actions that you can execute directly.

While the focus was on for VR this update, we also added several suggestions from the community for regular play and the editor!

• Additional actions are now mapped (while pressing the modifier key on non-Index controllers): shuffle and deal cards, roll dice, or flip through multistate objects using buttons on the motion controllers. The button guides change when you press the modified key.

• Free object rotation when grabbing in free cursor mode is now on by default, and can be disabled by holding the modifier (grip) key. A new option in the VR settings allows you to change this behavior.

• The main hand stick (trackpad on Vive wand) is now used for snap rotation and flying up down in fly mode by default. Holding the modifier key switches to object rotation, allowing you to rotate held or highlighted objects.

• Free object rotation is not used in pointer cursor mode

• Allow alpha masking for cards using transparent PNGs allows holes in cards. Use with caution: leads to graphical issues when used at the sides of the image.

• Show object descriptions in tooltips (can be configured in interface settings)

• Add link to knowledge base in main menu

• onCreated is now run after all properties have been set when pasting an object, so changes to properties made in the event remain

• Figures are now snapped using their base

• Don't consider the dice face names "+" and "-" as numbers (were shown as 0 in tooltips). Negative numbers are still considered numbers and used in sums.

• Card peek: You can now hold shift while using the object zoom to view the underside of a card. Other players will see when you use card peek, and it can be disabled in the session permissions.

• Card slide: You can now hold shift while dropping a card onto a deck to slide it under the stack instead of dropping it at the top. • Container drop: You can now hold shift while droping objects into a container. They will be inserted at the start of the container object list instead of the end (only relevant for stack or queue containers, not for random)

• Object thumbnails are now cached when a package is created in the editor. Objects don't need to be loaded to be shown in the object library, giving much better performance and lower memory consumption for packages with many objects. If you have an existing package, you can open it in the editor and upload a new version to include cached thumbnail images.

• Add option to show card faces instead of backs to object library, container explorer, and template selection in editor

• Make objects briefly penetrable when they are rotated on the table (using Q or E), so they don't collide with other objects on top

• Add name field to mod.io upload dialog: you can use a different name on mod.io than the package name

• Add private checkbox to mod.io upload dialog: You can set a package to private or public when uploading or updating

• Penetrable objects where colliding with regular objects when getting picked up

These updates were some of the many features on the early access development roadmap for Tabletop Playground, which you can check out on Trello here. Sign up for a Trello account and you can vote on which features we should focus on next.

Don't forget to join our community Discord to chat with the dev team and give us your suggestions for new features for the game! Until the next monthly development update, we hope you have many fun and great tabletop sessions in Tabletop Playground.