New weapons (a lot of!) and changes to ship selection. 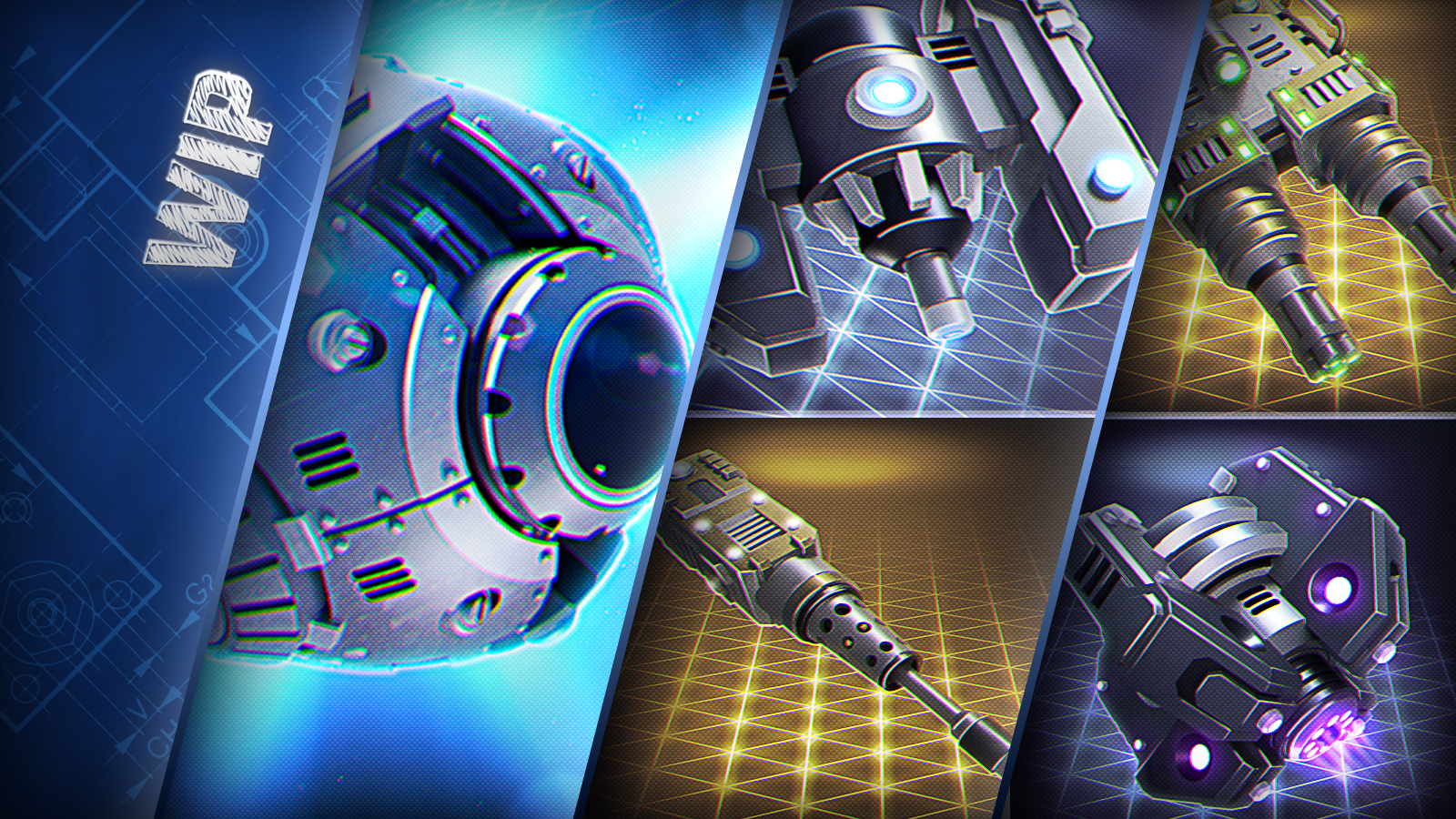 This WIP is mostly dedicated to new weapons and module, which will definitely please all Commanders who love Ranked PvP in Starfall Online:

One of the very important (like quests, tutorials, balancing and other curious stuff) things our game designers are busy with now is a full ship refactoring - a full rework of ships. This is done both in terms of balance and because there were a lot of new weapons & modules which currently don't have their place in the game or even can't fit into ships of a certain faction at all.

This is a long-term process, after which we will need new modification (progression) trees for all ships - that's one of the reasons we haven't really changed mod trees before even though they were outdated.

Here is an example of how ship layout can be changed: 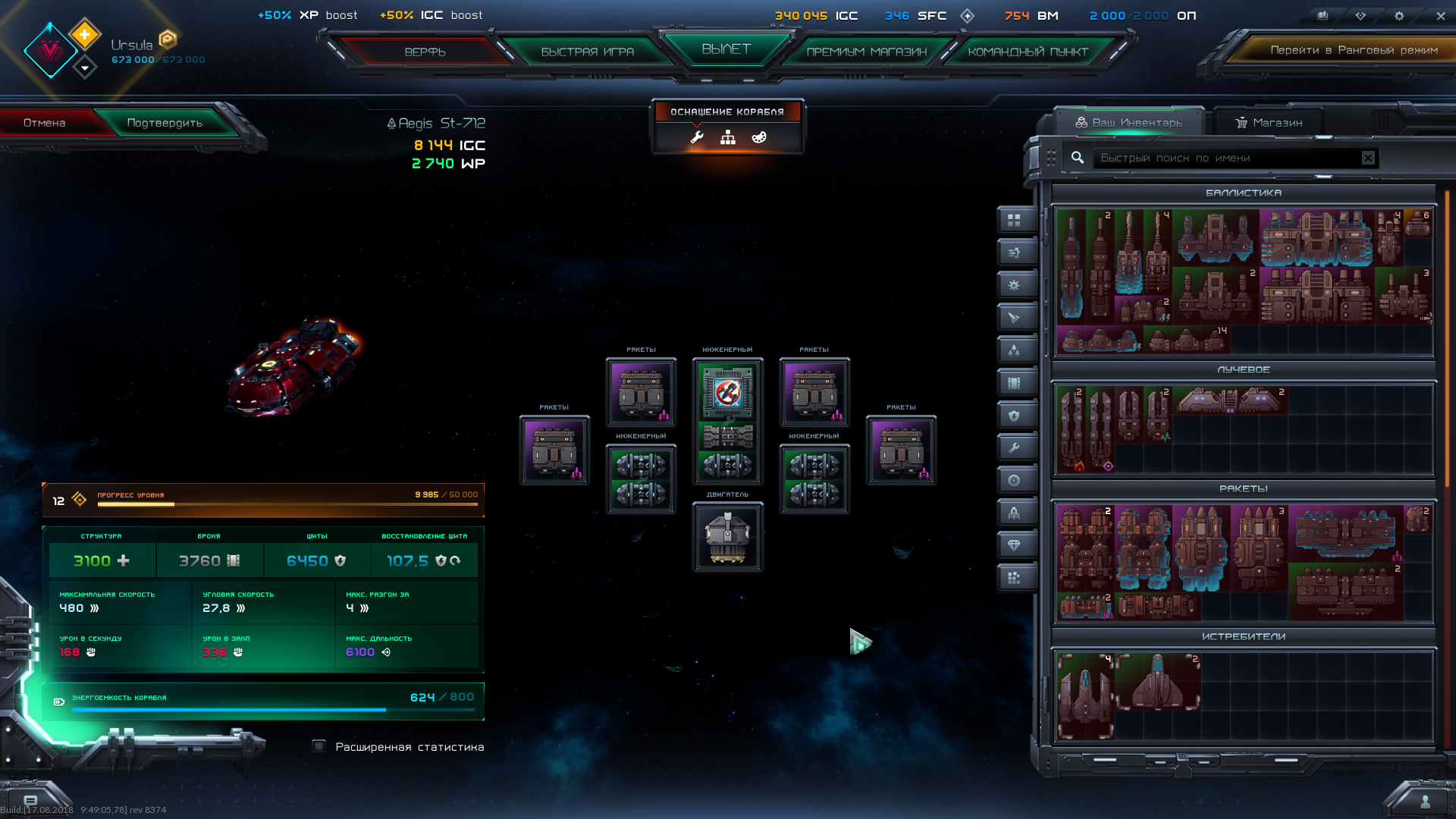 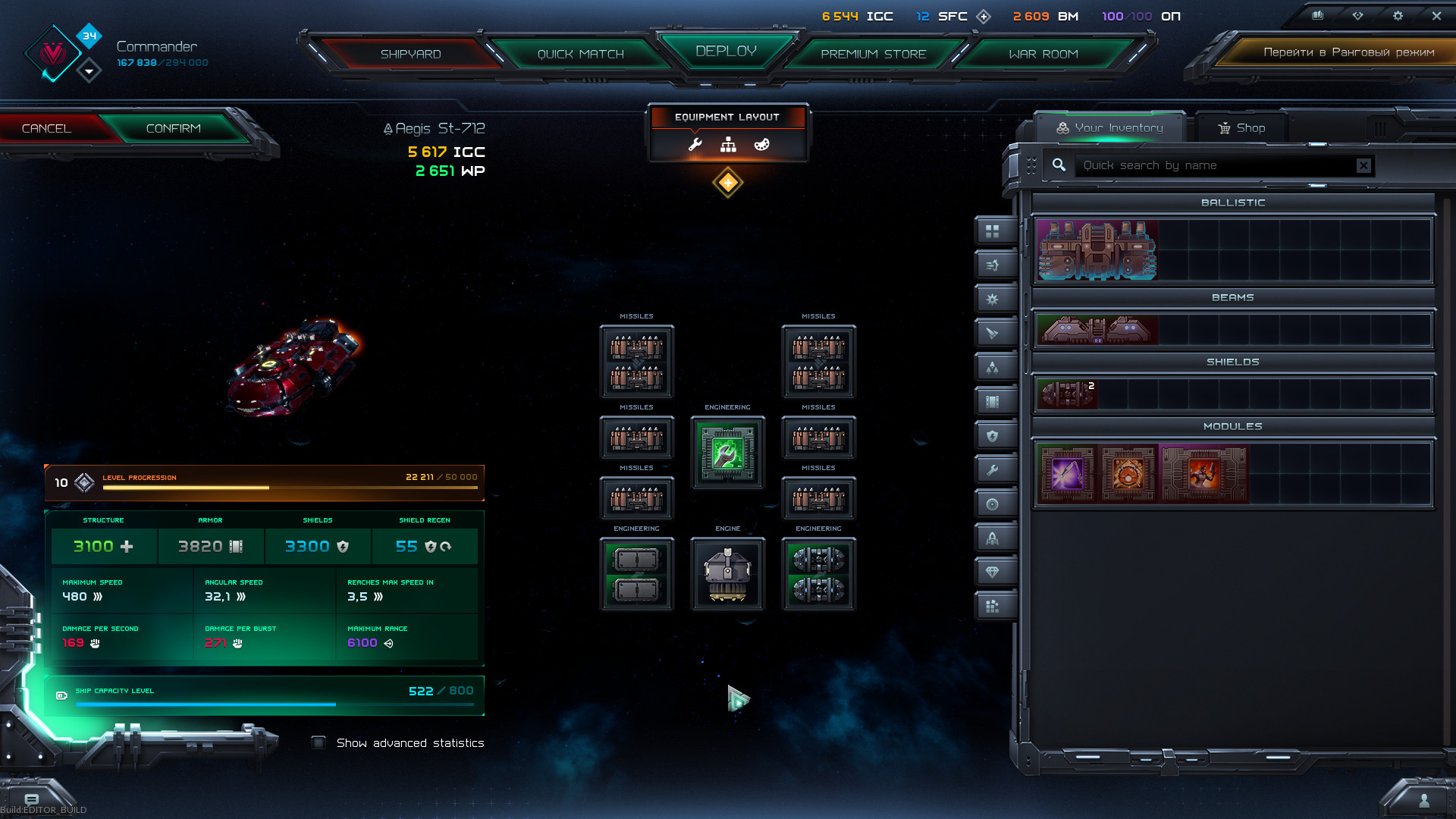 Rework in progress. Not a final Aegis.

Note that these changes can also affect all ship characteristics, firing arks or even change a type of a weapon a ship can carry - all these things are a part of a complex system we want to improve.

So, with time you will see new ship layouts, characteristics and, possibly, even several new ship models available at level 3 or 4 of ship model progression. We hope that after this rework you will discover more ships which can fit into your strategy and find new ways to use certain weapons and modules - however, ship balance is a neverending journey we will always enjoy;)

If you have ever played some MOBA games, you are probably familiar with "Wards" of all types - this small objects usually help you to get more vision and, therefore, have better map control. And since vision and map control are also two important things for battles (especially - Ranked battles) in Starfall Online, we've decided to implement this new module: 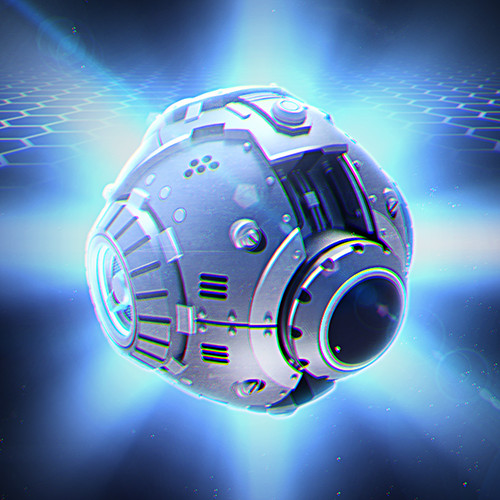 Ward Module is an activatable equipment, which deploys a special object to a target location in space. This object (ward) gives you vision around itself, in a limited radius equal to the one for Flack or Stalker mines - about 2000m. Ward has an unlimited duration, but can be destroyed by any ship moving over it or AOE damage (like Plasma Web or nuclear missile) - so choose its position carefully!

Remember we've said "that's definitely not the last portion of modules to appear in the game" last week? Yes, we already have another one to show you!

This time it's another AOE module to help you deal with large groups of enemies at once: S.P.A.R.K. is an active module which, on activation, moves in a straight line and damages all ships on its' way. That's how it looks like:

How about a couple of really long range weapons for your favorite sniper ships? Yes, they are here - two long-long-range cannons with a low tech level - both of them can be found early in the game: 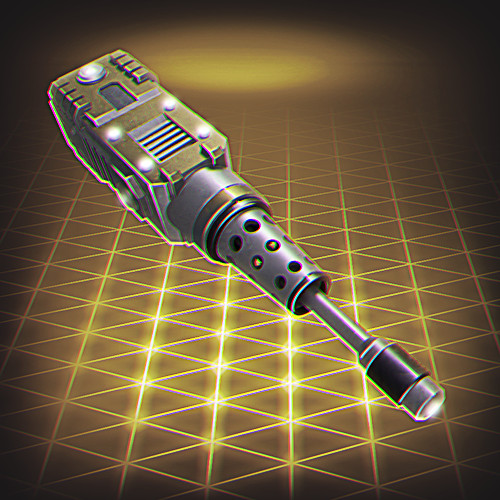 Long Range Cannon is a 1х4 sniper weapon. 18.000 of range - just as much as a high-tech Spear of Wrath has, but, as we mentioned above, this weapon is not that rare - it can be acquired even in the very beginning of your journey across the Galaxy. This kinetic, ballistic cannon fires once every 30 seconds, which means that it has a high damage per burst. Still, it will never be effective at close range or even middle range - so try to keep the ship with this weapon away from the battle. 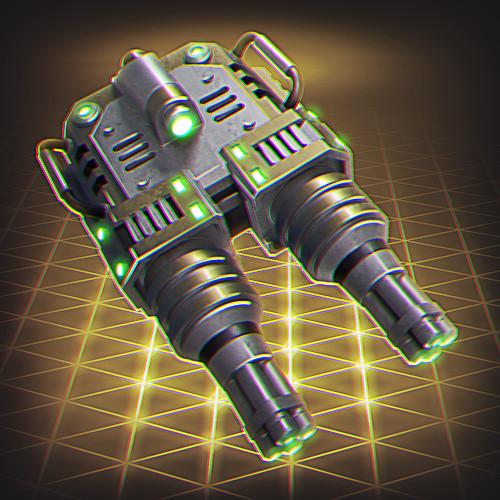 Long Range Plasma Cannon - a new plasma-based weapon, designed for battles at long distances. Has a 2х3 size and 14.000m range - not as much as a previous weapon, but still enough to stay away from enemy ships. Also, has higher damage per second - it fires with 4 projectiles every 2 seconds.

Beam weapons going to have another two models: this time you will meet 2x2 beams, as previously this size was a privilege of very specific Phantom lasers and Eclipse faction weapons: 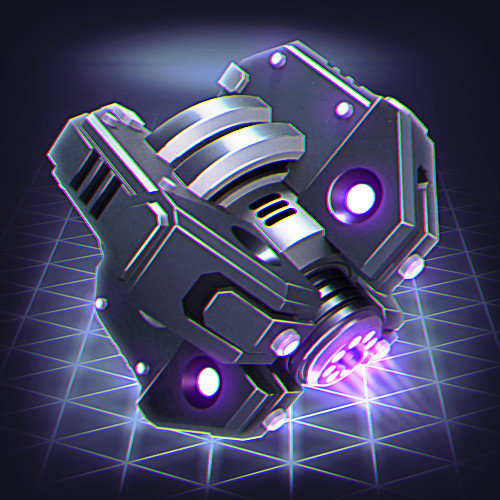 Ectophase Beam is a close-range 2x2 weapon - its maximum range can barely hit 3.000m. Even being a beam with a 3rd Tech level, this one can be found somewhere in Beta or Gamma systems - however, don't expect that each enemy keeps one for you. Ectophase Beam is the second weapons in the game after Disintegration Ray, which will have charge time - 5 seconds. Also has 18 seconds of cooldown, compensated by a high burst damage. 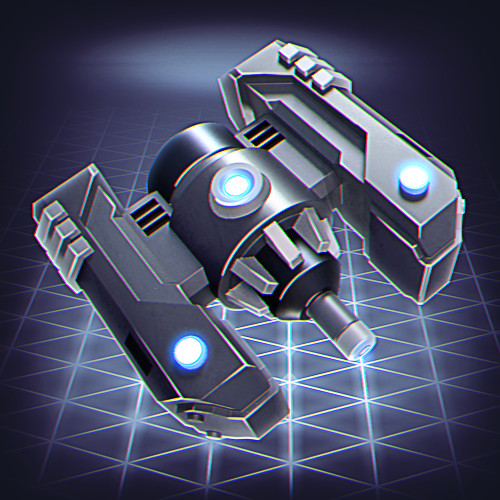 S-Laser is another 2x2 beam weapon. This weapon has no cooldown - instead, it continuously damages a target, dealing a fixed amount of damage each second. The 8.000m range makes it a decent choice for mid-range battles in Beta or Gamma systems.

There are not so many launchers in the game at the moment, so they definitely deserve to get new interesting models. Therefore, along with the great ships rework, it was decided to add a new torpedo launcher for sniper modifications of medium-class ships: 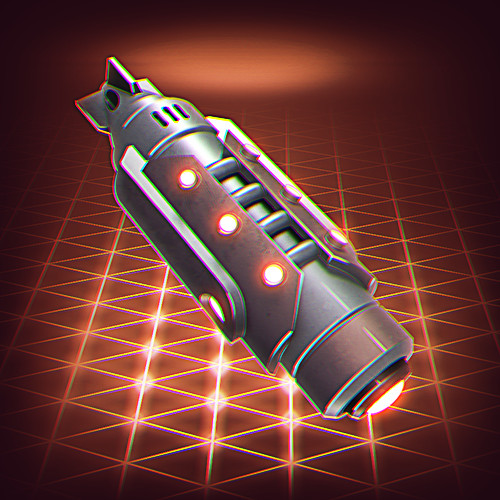 Sparrow Torpedo Launcher - the first 1x3 launcher, designed specifically for the updated ship models, which will have appropriate weapon bays. Torpedo range is 16,000 m, which is perfect for long range combat. High damage per burst and 15 seconds of cooldown will give you some time to quickly change positions and get ready for a new burst. 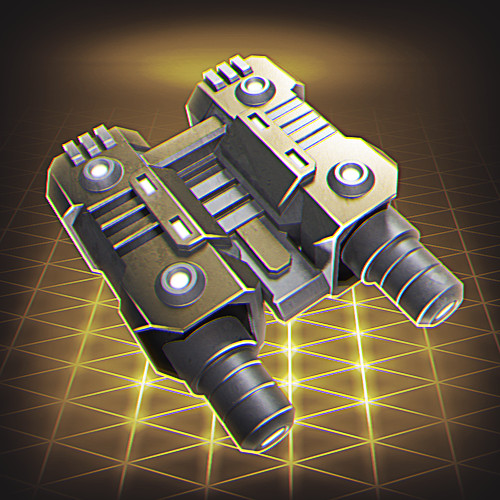 Auto Battery is a 2x2 ballistic weapon, which is very limited in range - only 3500m, but it allows to inflict very high damage per burst, firing 5 shells every 12 seconds. The third technical level makes it quite rare equipment, but Auto Battery still can be encountered even at the earliest stages of the game. 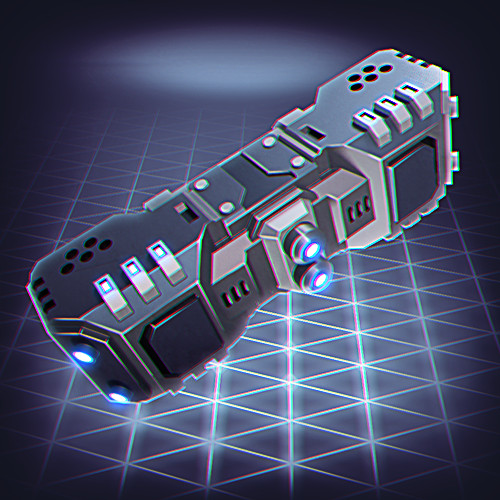 The first "Battery" type laser is a new 3x1 weapon, designed for weapon bays of the appropriate size and used for battles at very short distances (up to 4000m). Produces 5 rays per second, but still is designed to cause more damage throughout the battle.

And that's probably the last weapon for today - but don't relax now - there are a lot of other weapons to tell you about later. Besides, there is a couple important news to share with you next week - stay tuned! ;)

And one more small (but important in terms of convenience) change for the last week was a new way to display selected ship and its hp bar in the battle:

Normally, when the ship was selected, a round highlighted area appeared around it - but with a new version of shields, two different elements started to overlap each other - that's why it was necessary to change this effect in order to avoid some obvious mess. As a result, we returned to one of the old variants, improving it a little - now the highlighted ship is highlighted by a special contour. In addition, the hp bars of unselected ships are now shown in thinner lines, allowing you to easily define a selected ship and freeing up some space in all other cases: 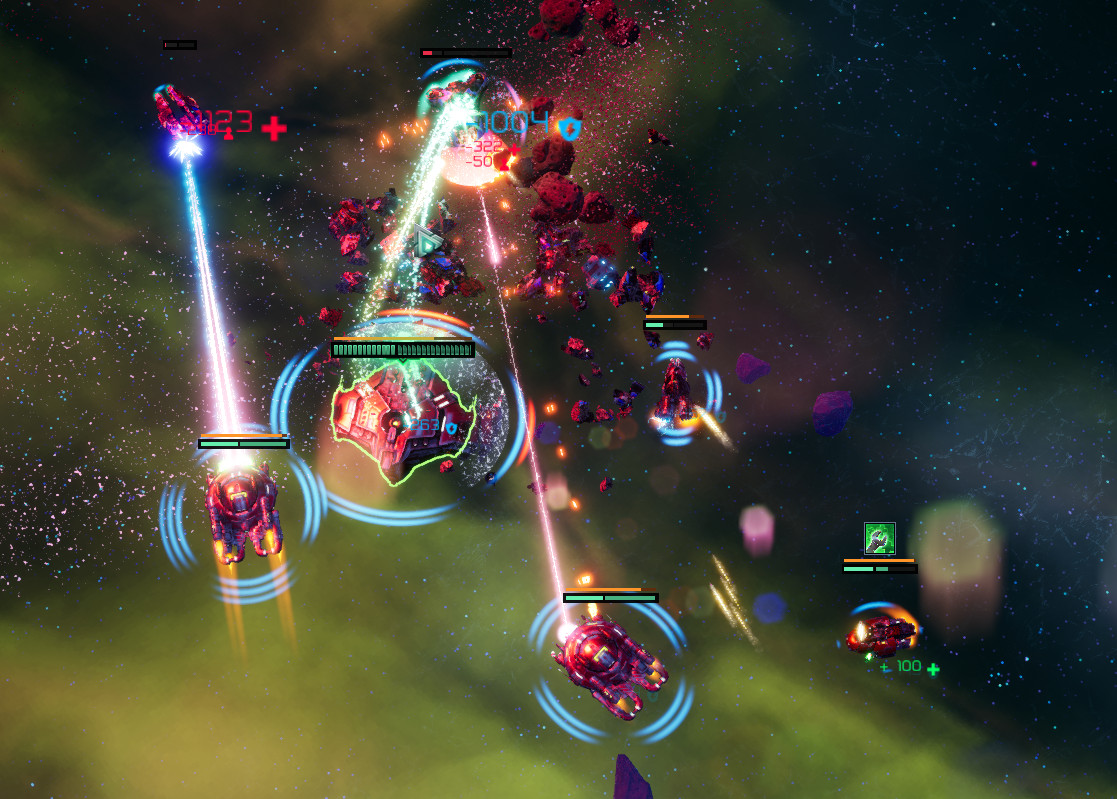 BTW: Additional shields display can be disabled in the menu - permanently or until the ship gets damaged. In this case, the critical state of the shields on one side or the other can still be determined by the red flicker, when projectiles hit the shield.

Looking forward to get more information about Starfall Online development? Check out our Facebook and Twitter pages - sometimes we create short posts there;)