This is a small update after 3 months, before a bigger update.

There will not be much concrete stuff to show yet, but as 3 months already had passed since the last news article, you deserve an update.

1 - About the game executable

Although unusual, I am thinking on already starting delivering the game executable at the platforms panda3d allows me to (windows, linux and mac) for your pleasure; but it will not be playable yet. I want you to see "live" the restoration (it was a BGE project before) and the posterior continuation of the game development. I will make no guarantee of it working for you yet though, it may or may not even if not being playable. I will tell at the file description if I am gathering bug reports or not for a given version.

I always liked music, it is a trait of having autism (although average to mild in my case); and since 2017 I officially learned to play violin, flute, music theory and so on... Even before that people were already saying they were impressed with the music I did without me really knowing anything about it, and now I can make better musics for this project by myself; it will have no cost and you will be able to have more influence over the game music compared to before. Only if really needed I will ask for other musicians support, and only the two which already served me well before. I am tired of dealing with situations such as the one I will tell you next, but first:

A QUESTION FOR YOU!

I am thinking of taking the game to the musical side: Instead of weapons you would use instruments; it would be quite bizarre, and bizarre is good in my dictionary. But I would like to ask you first: Do you like the idea? Or do you want BOTH instruments and weapons? Or just weapons? For now it is just an idea, not an additional game feature.

3 - Bonus: Starchild stickers for you

During this time I created some stickers for the project, but for now only for the vampire class of the game. You can get the stickers for free below, but keep in mind you will need to have whatsapp or messenger installed and the application sticker.ly.

More will come in the future, but they are not a priority. 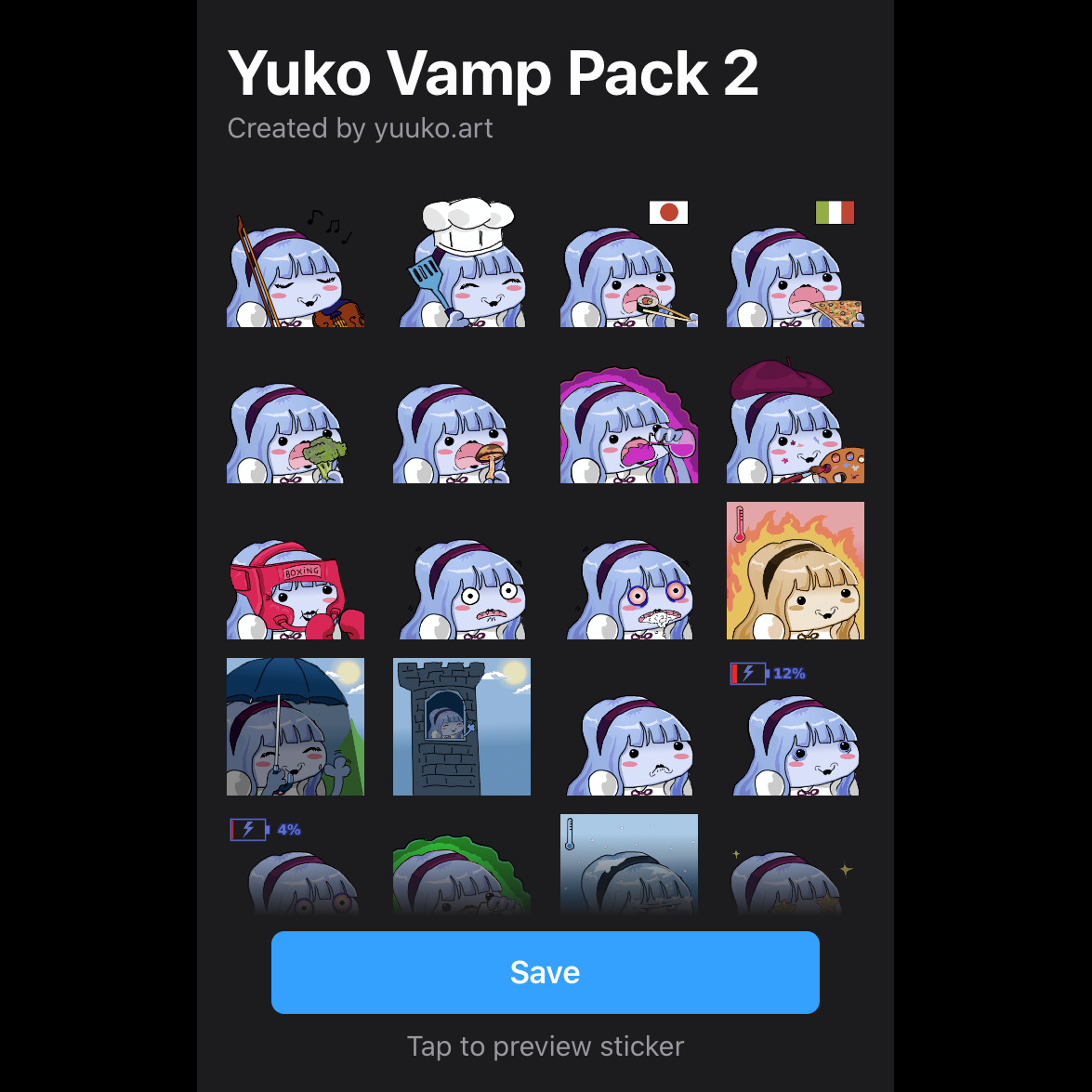 En.yuuko.art
(the site does not work properly at non mobile devices yet)

4 - Some musics will be gone

Yep, all the musics made by David Nyman in 2014 will be removed from the Starchild project. Allow me to explain why: Who followed the game back then already know I paid a musician to do a new music just for the project, but he jumped off boat without finishing and saying it was because he would "stop working with music". It was not true, actually he did not wanted to continue working for me because I was too perfectionist. For example: In music, an instrument happening 1 second before or after DO make a difference, and back then I made it clear which if he decided to charge more for further adjustments I would pay it.

There are many people in the industry which would had said some nasty words to him if they were in my case, but I tried to be polite: I asked for his cooperation in case other musician continued the unfinished music and needed something he could give to complete it, but he refused. Before that I already had bought 1 pre-existent music from him and another one was made by me and I just asked for a "remaster" of it; while it was an easy money, he never complained...

Next I asked to his friend Garoad, who in the past humbly offered his services as musician and also suggested me David, if he could continue the musics of the project; but to my surprise he quickly accused me of asking to "steal another people style" and which he was "too busy with people paying him well for his own style". All I asked was if he could continue the style of the recent musics, not to copy it, as I felt his style was similar to the project musical style. I already had defined most of the project musical style before sadly accepting his suggestion, his friend only continued it with his own style which was similar to mine. In other words, according to him I wanted to steal my own project style! It was easier for him to misunderstand me as I no longer was a "potential customer", showing which he already had a negative view of me..

I did not needed to, but later in 2020 I apologized to both not because I was wrong, but for being a little abrasive in my response to their attitude. Garoad accepted and that concluded it, but David Nyman never answered; neither never apologized by their part in that sad event. Perhaps some people forgot about the virtue of having humility.

That was a minor reason for me halting the project before; that is why some musicians ask me "why you do not hire me? I can help!" and I refuse, it was because of past experiences. I will not promote such musicians, and the only way is removing the "tainted" content, thus allowing this subject to fade in the mists of the past.

5 - What in the universe was you doing in 3 months?
In 3 months I had to restore many old family photos, delete things I no longer needed in my HD, selected and organized... I edited all the music videos I made in my life, edited a lot of thirdies musics to put at my site, edited professional photos I took in 4 years (this one still in progess)... it was easily surpassing processing around 15.000 files. From 550gb, now all I have fits in a small sd card and only occupy 90gb of it; it is easier to backup my project and everything else.

Oh, I also made 3 3d miniatures for a friend. It was a paid work so it had priority, but as I said before it did not caused issues with my project. Most of those things are things I should had done before since 2014 but did not; and after I did them now I no longer will need to do so ever again. That time will now be left for my personal projects such as this one.

6 - Why are you so personal?
As I said, I am not a serious person; just a trans girl making a game which have a lot of potential according to many. Indiedb is like a facebook or instagram to me (I no longer have any), but focused on my project. I hope the project friends shape this project with me and make part of my personal life too, just do not be rude as I do not tolerate that.

That is all my friends, until the next news article!