Today I am free of the tyranny of school! All my time belongs to Soul Saga! 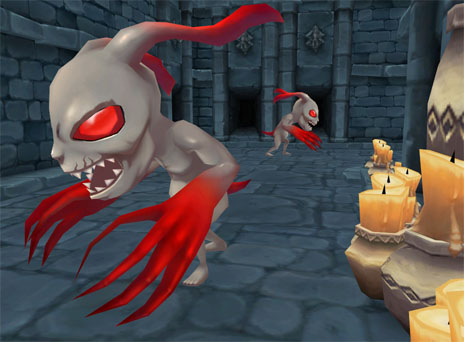 Today was admittedly not as productive as I was hoping for. I got swamped with more stuff at school than I expected, especially with all of my Japanese friends going back to their homeland. I felt it was OK to take most of the day off to say goodbye to them. さよなら！ I'm sad to see my friends go, but I am now free of the tyranny of college! Starting tomorrow I can devote 100% of my time to Soul Saga and make sure the Kickstarter is as good as can be!

Tomorrow (which is now today as of this posting), I will start working on adding some more particles, sound effects, and the enemy casting delays. If I have time I will also start to implement friendly AI so the player can take an ally with them into the dangerous dungeons!

I love how excited you sound when saying you're going to devote all your time for the development of the game, why is that?

Sorry if that sounded a bit rude, but are you getting a good support for Kickstarter, or is it just fun to work on this?

Keep up the good work anyway, I look forward to it!

Hey BadXFox. =) That didn't sound rude at all!

I think my excitement can be summed up simply as I love working on Soul Saga. I can't imagine doing anything else with my life. The world of Soul Saga is something I've really enjoyed creating stories about for years, and now I'm working vigorously so we all can enjoy talking with, living with, and fighting with the interesting inhabitants of this exciting universe. I've invested over $20,000 and thousands of hours into the project so far, so it's an amazing feeling to see it all finally coming together!

The only thing I want to do with my life is turn Soul Saga into the best game I can. I can't even think about anything else.

The Kickstarter won't be launched until mid to late April, but I am hoping the project sees positive support. Each penny will go towards making Soul Saga bigger and better. Better graphics, better music, better sound effects, and possibly even multiplayer if the support is large enough for it.

I love how dedicated you are, good luck with the game!

Man I cant wait to back this been looking at your updates everyday! This is like what i have been waiting for in a game

Everyday? =D Thank you! It really helps motivate me to know that there are people like you who are looking forward to this game as much as I am. I'd like to get your opinions when you try the beta!