From the start, I've been planning to use bone animation for Absent Life, since weighted bone animations can generally look really good, even when animating a single piece sprite. All you have to do is spend time and assign bone weights to appropriate parts of your sprite. Although it may be fine on characters with small pixels and/or slim limbs, it is not generally highly regarded on pixel art. I've been trying to integrate weighted bone animations for Absent Life's chunky pixels.

I'm recording everyday's work just as I was doing with the daily devlogs with more in-between cuts. I decided to make them more "behind the scenes" style; so instead of a lot of coding timelapse stuff, I am including more explanations throughout the devlog video. In the devlog posts, I will be embedding the weekly devlogs (like below) and talking about the week's progress, possibly in a more in-depth perspective.

From the start, I've been planning to use bone animation for Absent Life, since weighted bone animations can generally look really good, even when animating a single piece sprite. All you have to do is spend time and assign bone weights to appropriate parts of your sprite.

Unfortunately, for pixel art this was seemingly not the picture. Although it may be fine on characters with small pixels and/or slim limbs, it is not generally highly regarded since it ruins the pixel-perfect nature of the graphics. Using weights is even worse since it distorts the individual pixels. Of course, it is all a matter of style and I wanted to try it out nevertheless.

In the end, I'd consider the animations as passable for now. I will try to reconsider the aesthetics at a later phase, when it is time to decide whether or not to replace all the character sprites with new ones; and that time is far away from now. Before that will be to implement some shaders and see where the general looks of the game progresses to.

You can also see in the gifs above that the characters are holding some weapons. Depending on the current weapons equipped by the characters, the weapon sprites also change. For example, the police equipped with a pistol and a flashlight will be holding those during the encounter phase of the game. The sprites are parented by the bones, making their position and rotation synced with each other.

Normally, in RPG games the fleeing mechanics are simple. When you want to get out of a fight, it is generally enough to click a button to escape from the enemies. In Absent Life, things will not be that easy. Since the game takes on a horror theme, it is necessary to put pressure on the player as much as possible. Therefore, implementing a well designed fleeing system was necessary.

In Absent Life, when you click the "Try to Flee" button, you enter a fleeing state where your characters get a debuff weakening them. This is to make the player hesitate about using this mechanic, considering whether it is time to click it or not. After the button is clicked, you will get a "Flee" card, which will complete the fleeing when used. The trick is, this card is not given to your hand; instead, it's shuffeled into the discard pile of the hero. This means that the card should travel it's way from the discard pile to the draw pile to the hand. This turns the fleeing phase into an endurance race by pushing the player into this waiting period. Well, if you can somehow draw the flee card from your discard pile, good for you, that works too. 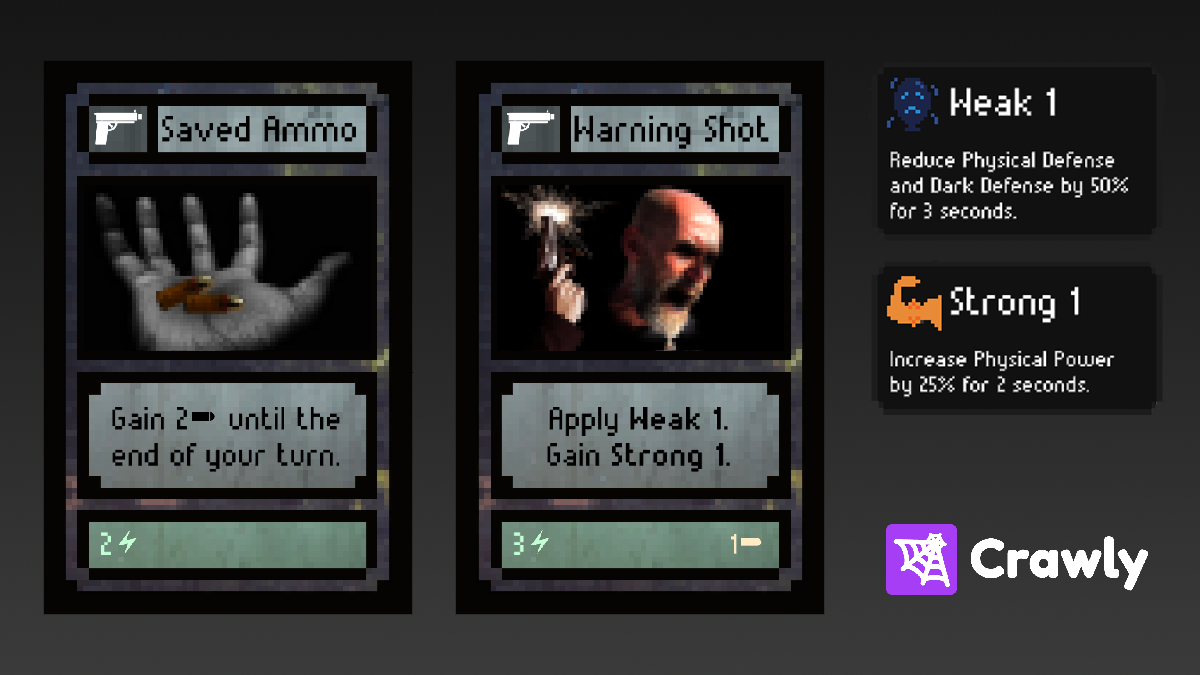 The general mechanics constituting the gameplay loop is complete, and that means, I will be starting to fill the game with content required to reach a state to demonstrate the gameplay taste of the game. This week, I managed to complete the animations for two heroes: Jake and Cara, one companion: The Policeman. I've also added the first 10 pistol cards to the game. These cards will be the "starting" pistol cards, meaning that you can begin your run with a deck composed of these cards. The design of the cards are subject to change.

The first playable version of the game will be "Alpha v0.1", and this version will not be open to public. This version will be used for demonstrating the basic gameplay loop, with minimal content and polish. I will be testing the game with some friends, getting feedback on what could be improved about the idea. I did designate myself a deadline at November 15th, but I will probably be pushing another week, since my progress this week showed that I may not be able to complete the version in time. Nevertheless, I will keep pushing as hard as I can to turn this into an enjoyable experience.