Beyond Enemy Lines 2 will launch with a Multiplayer and so servers are a big topic. You want a quick match with a friend? Just host a Peer-2-Peer (P2P) session from ingame and your friends can join. You want to run a 24/7 Server, then a dedicated server is the best way for you.

Launching the DedicatedServer.exe will open this window: 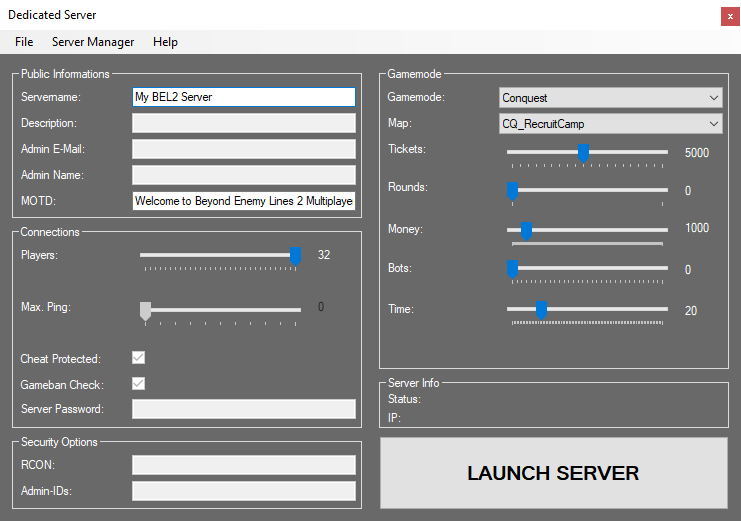 This window let you setup your server. By pressing "LAUNCH SERVER" your settings will be saved and the server will be started. Starting the DedicatedServer.exe will reload your last saved settings. Changing the gamemode will result in reseting the core options to the gamemode default settings.

IMPORTANT: We had on some systems the issue that opening the Port 7777 was not enought to get the Server registrated on the Steam Master Server. A workaround would be to forward the entire Server.exe trough your firewall. Definitly not an ideal situation but a workaround. The Server.exe to forward is located in this folder:
...\Steam\steamapps\common\Beyond Enemy Lines 2\BeyondEnemyLines2\Binaries\Win64\BeyondEnemyLines2Server.exe 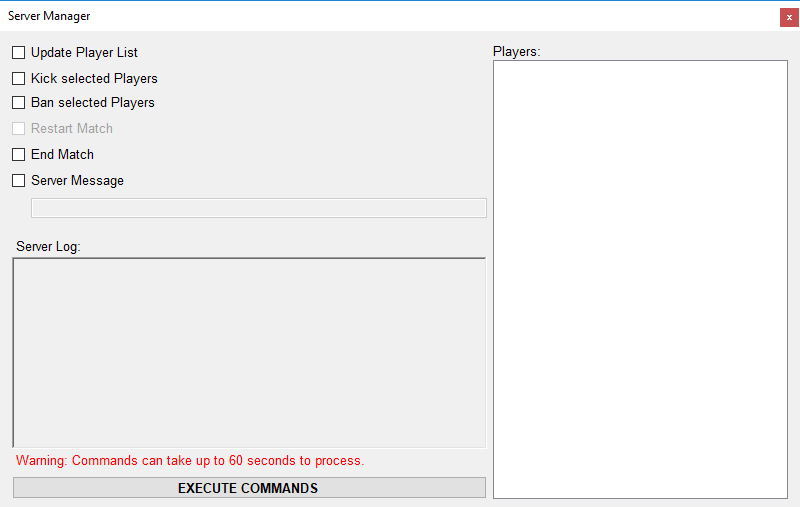 This window let you communicated with your gameserver and is until ingame RCON is fully implemented the only way to interact with your server except of shutting it down.

Update Player List
This will fill the list of players on the right sight of the window with checkboxes for each player.

Kick/Ban Player
All selected players in the Player List will be either kicked or banned.

End Match
Will end the current match and the server will switch to the next map.

Server Message
Will print a message with the sender Admin to the ingame text chat.

Warning: If you execute a new command before the last one was executed, you will overwrite the commands. You can not stack the commands.

Each time you press EXECUTE COMMAND, the tool will request the selected options from the server. As the Server is checking every 60 seconds for new commands, it could take up to 60 seconds until you see the result.

VAC
Beyond Enemy Lines 2 utilizes VAC to detect cheats and hacks in the game as well as Gameban those players.

Anti-Memory Injection
All important variables are protected against Memory Injection and the game checks for memory injection tools and will crash once such a tool is running.

Server Sided Variables
All the important variables which are also projected against memory injection are running on the server. Weapon Handling is entire server sided and only result in actions visible to the server. Beyond Enemy Lines 2 does not deal damage on the client side and let the sever confirm this. Here the server gets a request to shoot a weapon from the client and the server checks the players current location, fires the weapon and broadcasts the result.

Global Ban List
On each Map change, every Server (Dedicated or P2P trough ingame hosting) will fetch a Polygon Art Ban list. This Ban List contains SteamIDs of players with a game ban. Once a Player joins a server, it's Steam ID gets validated. If invalid the player gets kicked instantly. With each update after the release, the then current ban list will be updated and hard coded in the game as a backup, if the online ban list was not successfully fetched.
Warning: Not only cheating and hacking will result in a game ban. Toxic, racist or other inappropriate behavior ingame or in this community can result in a game ban!

Active Admin + Local Ban List
Server Admins can activly kick and ban players from their server. Server Bans will result in a Local Ban List which works exactly like the Global Ban List but only for this server. This Local Ban List works for Dedicated and Player Hosted P2P Servers.