"Sentimental K" is a Rogue-like video game based on 3D actions. The game is being developed using Unity Engine and we are planning to launch it on Steam as Early Access in the 2nd quarter of 2020.

Hello folks!
We are team "ForDays" in the development of a Rogue-like Action game "Sentimental K".
We will keep up on writing Devlog to share our development process of "Sentimental K" and we would like to hear every one of your feedback

We hope we can create a game that everyone would love to play it!

Find out more about Sentimental K by searching on Steam store page.
Click here to meet Sentimental K on Steam
Please click [Follow] and [Wishlist] buttons! It will help us a lot!

"Sentimental K" is a Rogue-like video game based on 3D actions.
The game is being developed using Unity Engine and we are planning to launch it on Steam as Early Access in the 2nd quarter of 2020.
Before the description, please watch our trailer video below to get your first feelings about the game!

The goal of the game

Players must defeat enemies to move forward to the destination by unleashing the powers of "Weapons, Skills, and Artifacts" obtained from confronting various incidences.
If the main character deceases in the middle of her journey, players will lose all of the rewards earned and restart the journey from the beginning.
The core of this game is to bring out the best plays of player's own and to reach the end of the journey by finding the best synergies between "Weapons, Skills, and Artifacts" obtained as rewards.

"Sentimental K" combines 3D action genre to provide a more dynamic and intuitive play experience
along with a Rouge-like genre that will ensure new and unexpected experiences every time.
Weapons, skills, artifacts, dungeon configurations, bosses change randomly every play.
Random farming would allow us to make exciting choices that may lead to the synergy and ultimately allow us to always enjoy the unexpected and challenging play.

The game is based on Top-view, however, to provide players more dynamic battle experiences,
point-of-view will be adjusted when players fight against nearby enemies.

Broadsword would be an excellent choice if you prefer to use a balanced weapon.
With the broadsword, players can move swiftly, mark enemies, and attack them in furiously.
Marks alone do not have any effects, but players can take advantage of the battle by using special attacks or special skills which activate the mark.

Using Greatsword, players move slowly but their attack would create a heavy area of effect (AoE).
Also, the special attack would give players a boost effect to unleash a more powerful effect on the next skill.

Currently, there are 60 skills available in total.
More skills to be continuously added after the early access and the official opening.
We expect there would be about 80 skills on the day of the early access.
Let us introduce a few skills as an example

Each skill has its effects.
Each skill can be effective individually, but we've focused on the point where players could have a lot of fun depending on how well they combine the effects of each skill.

The skills shown as examples may sound complicated, but by combining skills above:
Leave a [Stun Mark] on the enemy with 'Throwing Sword'
Stun the enemy with [Stun Mark] by activating the mark with 'Mark Explosion'
Players can make use of 'Battle wings' to apply [Players can immediately reuse this skill twice if this is used on the stunned enemy]

To sum up, players can utilize these skills to make a combo attack as follows:

The above is just one example of many different combinations.
We've provided various plots in which players can come up with other combos.
We wish every one of the players could find their combos, and have fun with seeking better combinations.

"Sentimental K" consists of three different chapters; Act1, Act2, and Act3.
In every Act, different kinds of stages are arranged and connected with randomly generated routes.
At the end of each Act, you must defeat the boss to proceed to the next Act. 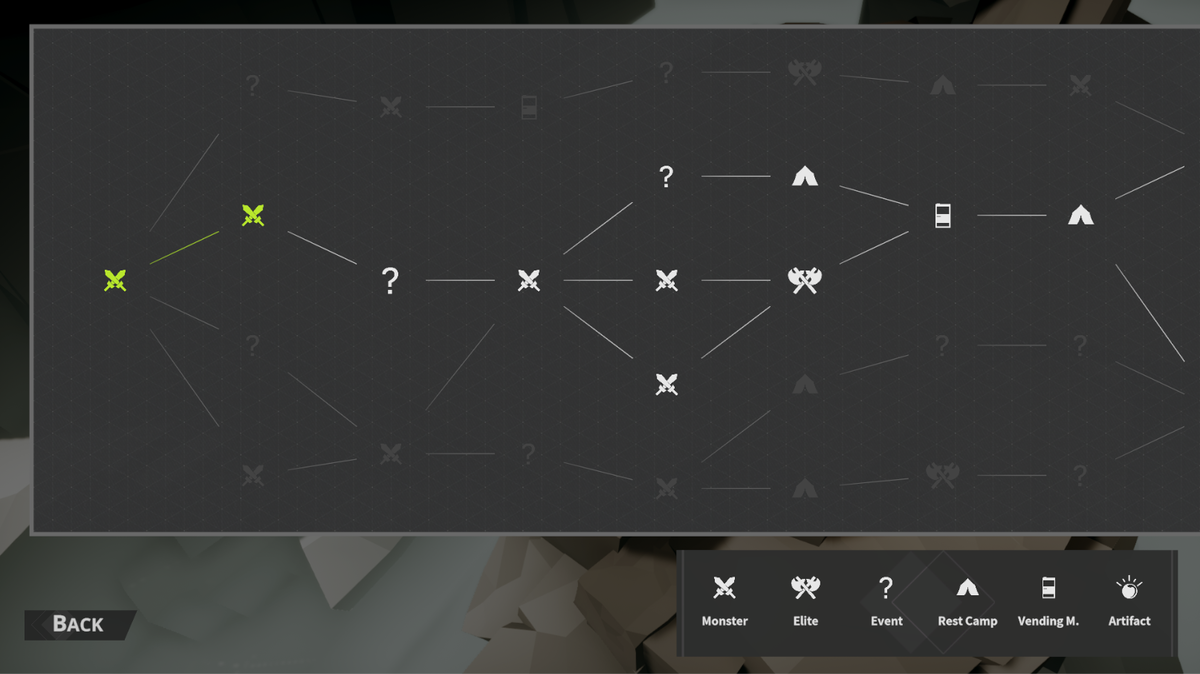 At every stage, players must defeat all enemies generated randomly to continue your journey.
Players will meet different kinds of enemies at each Chapter of the game.
If you defeat enemies, you may have a chance to obtain [Golds, weapons, skills, and artifacts] as a reward.
Defeat stronger enemies spawning at the next stage by using rewards that you earned.

During your journey, players may encounter a friendly character or an unknown place.
Make your choice for what happens during the encounter with various characters or places,
and receive corresponding results.
Several choices require players sacrifice, but all choices are on your own.
But remember the butterfly effect.
Every choice, whether it is good or bad, will affect your play at the end.

Players can purchase weapons, skills, and artifacts by trading with golds that you collected during battles or encounters.
Some items are only available at the machine. Sometimes the machine sells items with discounted prices.
So stopping by the vending machine during your journey might be a superb choice! 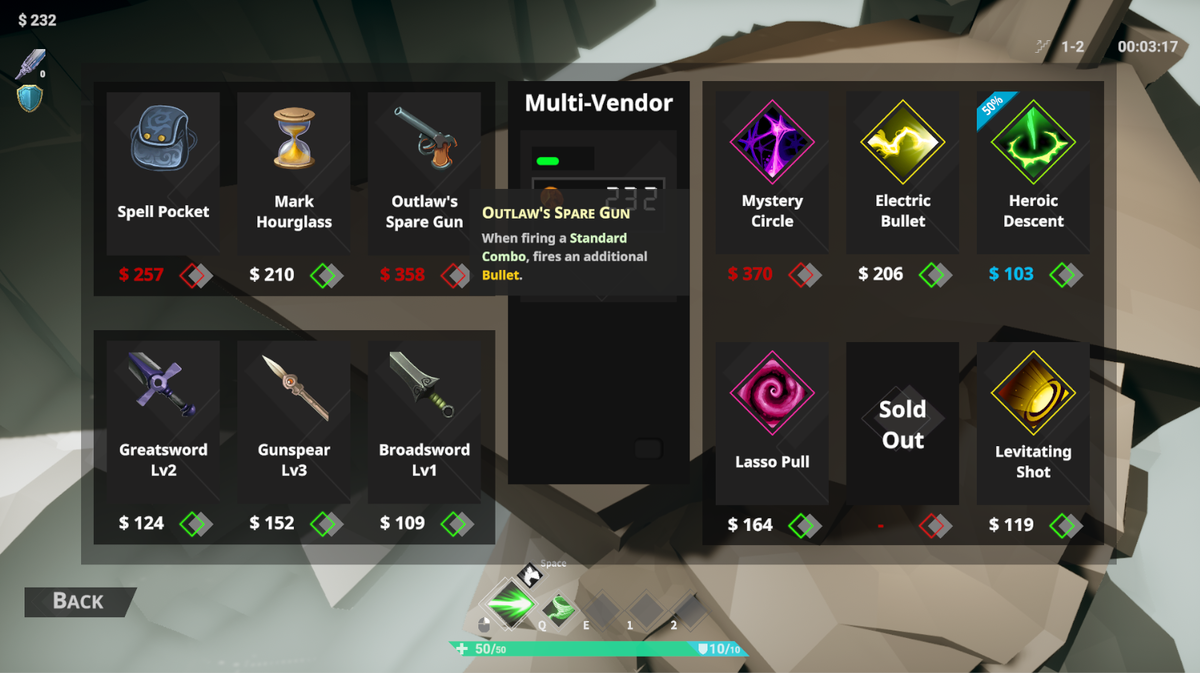 < The vending machine may swallow your coin. >

Actions can vary significantly depending on how you would combine obtained skills.
In the beginning, most of the skills are easy and intuitive to deal with.
Several skills may not perform as well as intended if you wouldn't consider how to use them effectively.
Select the best skills considering your current resources and future resources.

< It would be a better choice if you consider a combination of weapons, skills, and even artifacts. >

Weapons provide direct feedback to player's strength while assisting player's actions.
Particularly, weapon-specific special attacks have a close relationship with special skills.
Thus, it is likely to be more helpful to choose similar weapon types and skills when you use these special skills.
(Of course, sometimes different weapons would be more advantageous depending on your play styles!)
Weapons with a higher rank will increase players damage and life,
so you will always have to be careful to obtain more powerful weapons.

Artifacts will empower additional effects or supportive effects to players' actions.
However, few legendary artifacts can lead to the very new action styles.
Players will consider obtaining artifacts to obtain skills and weapons.

< The actual play could be greatly affected by a single artifact. >

If you are having a hard time managing life, you could stop by the rest camp to restore your life!
If you believe that the damage you took is slight, you could also strengthen yourself by taking on the training.
Taking advantage of the rest camp could be one possible way to persist your journey.

As mentioned earlier, most of the elements are generated, provided, and obtained randomly.
There are few exceptions to this randomness, of course, but the game will provide players a whole new experience each play.

If you're by a monster, unfortunately, you are going to start from the beginning with a rusted sword.
But do not worry

As you proceed to play, you will eventually unlock various achievements.
And those achievements will guide you to whole new experiences and routes.
The most powerful weapon is your learning experience during plays.
Trust your plays and abilities!

< Death is not the end. It is only the beginning. >

"ForDays" is committed to launching 'Early Access' in Q2, 2020, and is working hard to make 'Sentimental K' a more fun game.
In the next Devlog, we would tell you more about the direction of "Sentimental K"
Please leave your valuable comments, thoughts, or critics regarding our first game!
We will continue communicating with all of you who are interested in our game

As since April 2019, an indie game development team "ForDays" was formed with five passionate people.
Our team is composed of five members who left the Action-game development company, KOG, located in South Korea.
After being independent of large capital, we are developing "Sentimental K" with indie spirits which are making our favorite genre(Rogue-like), and the most confident genre(3D action).