This week’s primary focus has been on NPC safehouse AI and events. Having the NPC metagame is all well and good, but if you can only view it in-game as resting survivors staring blankly at brick walls then it’s not much fun. Lemmy’s task, then, has been to encourage NPCs to take up activities like sitting on sofas, lying in beds and wandering from room to room whenever they’re are restless.

On top of that there’s also NPC activities like standing guard at windows (looking for zombies or other NPCs approaching) or patrolling the safehouse for those poor uninfected people to contend with.All this already exists in the meta-game, but this week’s challenge has been implementing the AI activity that’ll actually occur when you're there to witness it – making the characters’ locations consistent with the meta-game whenever you approach an occupied building.

Of course, though, with all this fresh safehouse hustle and bustle comes the need for a fresh assault on building-based animations – the safe delivery of which has been entrusted to Binky.Pray bear witness, then, to a bald and near-naked man doing some mimes. From left to right, our hero survivor is: a) TERRIFYINGLY sat in a chair b) RIP-ROARINGLY climbing up a rope and c) DRAMATICALLY climbing out of a window. 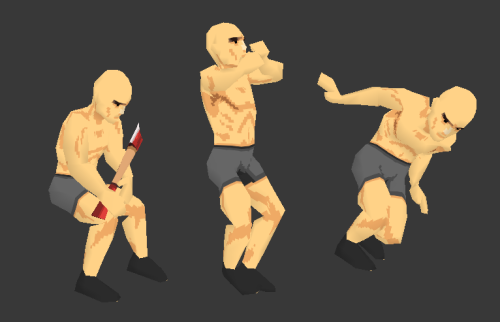 Romain meanwhile is currently planning out a redesign of the skill system – perhaps for RC3, or perhaps for updates beyond. The one that is currently in the game is rather bolted on, and mixes physical things with intellectual things that really need to be represented differently. In the now trait-crazy world of Zomboid we’ll have physical stuff like how strong or sneaky you are represented by traits (that’ll also affect people's opinions of you). A character may start out as strong, but spend months lazing about in the safehouse, losing the strong trait, and perhaps gaining an overweight trait. We feel this is a much more natural system for the game's direction.

Skills will be anything genuinely skill-like: the knowledge and practical skill required for carpentry, farming, firing a handgun will be changed to leverage the importance of books and NPCs in levelling up. While it'll still be possible to level up through repetition this, as in real life, will take too long to be practical. Each skill level, then, will now be labelled at different points between Beginner and Master - and for each skill level there will be a book that’ll give a character a substantial bonus to the speed they learn that level. Likewise, an NPC that's very friendly toward you may be willing to teach you, again providing a substantial bonus to the speed you level up.

This, in turn, will make professions much more important and difficult choices. After the levelling up speed has been rebalanced, generally, if you start off as level 0 in a skill you shouldn’t expect to rely on ever becoming a master of it. Instead the way to go will be in relying on NPCs who spent their pre-apocalypse years honing their skills. Every skill will have a profession that starts with a large degree of experience with it (but never the top level) and professions will therefore massively influence the play-style of any bout of survival you go through.

That’s the primary development work covered, then, but we also want to turn the spotlight on some of our beloved contributors in our Monday blog coverage – so step forward lovely, lovely Zach Beever. His amazing music was sadly cut out of later RC builds (just one of the development casualties that we discussed last week that prompted a great deal of the recent rebuilding work) but he’ll be back with a vengeance once RC3 hits… 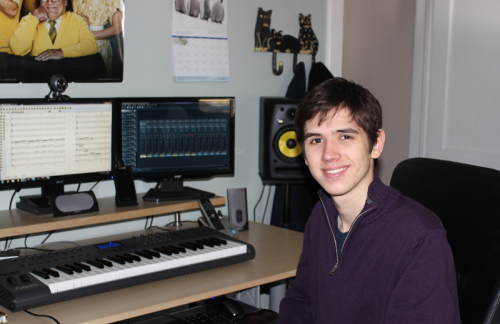 Hey Zach! What kind of crazy schemes have you been up to since we last spoke?

I've been focusing on music now more than ever! Piano and composition are two incredibly important areas of my life. I spend a huge part of my day practicing and writing. I had a fantastic opportunity last summer to study in Prague with an amazing composer. While my focus on that trip was my contemporary compositions, everything I learned helped me improve as a musician, and I think that improvement is definitely shown in the latest Project Zomboid tracks.

So your last batch of music was sadly disabled halfway through the RC2 builds. If people didn't hear them, what did they miss out on? Was it very different to what people will knew from the 0.1.5 release?

The last set of tracks was a diverse group, covering all types of different moods. There were as many ambient pieces in it as there were dramatic, tense tracks. I also started to experiment with different instrumentation. In fact, one of my favourites from the set, Fight or Flight, has a rain stick in it.Besides the obvious differences from previous sets, such as the quality of mixing, I feel that the individual tracks of the last set have more direction to them as well. It may not seem important, but I feel it makes a difference.

You’ve been back at your keyboard for fresh tunes for RC3 as well. What’s been your focus for your more recent contributions?

The biggest suggestion from the team has been to include recurring motifs in different tracks. It's something I wanted to do for a while, and it's in this iteration of tracks that I've finally been able to make it work. Aside from that, I'm trying to fill out the soundtrack, balancing the dramatic moments with the ordinary ones and vice versa. As far as new music goes, I've completed two new tracks so far. The lower output is a result of the extra attention to detail.

Have you been experimenting with any new influences, tempos or sounds?

Yes! As well as finding new ways to use the orchestra, I've been experimenting with electronic and flamenco music. That's not to say you'll be hearing a guitar ensemble or dance synths in the next update, but I've kept those genres in mind during the writing process.

So how many tracks will that all add up to? What timings will the overall PZ soundtrack run to?

I can't say for certain, but it will be anywhere from 30 to 40 tracks. (For those interested, the current count is 25.) For timing, the in-game soundtrack will be over an hour of music.

Where would you like to take PZ music in future?

Keeping in line with recurring motifs, I'd like to make sure the final product is cohesive. Someone should be able to play the game, hear two tracks and then be able to recognize all other tracks as Project Zomboid - no matter where they hear them. I also intend to put in the time to revisit older tracks and improve their sound quality: paying more attention to mixing, the balance of the instruments and other such things.

Finally, the album! I've begun work on extending the main tracks (all the non-ambient ones). It's kind of a musical face lift. The soundtrack is going to stay a soundtrack, you don't have to worry about obscure classical references breaking through, but the standalone, extended versions are a lot more musically interesting.

I know not everyone likes a soundtrack that's different, though, and I want those who like the original tracks to be able to listen to high quality versions of them - not just the small .ogg files they are now. I'm not sure how all this music will be organized, but I know it will be released. I can’t really promise a date, but I'll work to the best of my abilities - this year will be extremely busy for me. In the meantime, keep enjoying Project Zomboid!

So that’s about it for this Monday, although we’ll likely reappear sooner than usual for a rundown on what RC3 will bring in terms of modding and the modding tools EasyPickins has created for us. More casual PZ-ers might find it a little dry, thus us not talking about it on a Monday, but it’s nevertheless of vital importance to the game’s future – and we want to make sure everyone has the skinny on it. So stay tuned for later in the week for a bonus blog. Cheers all!

I'm interested to see what new songs are going to be added. I liked the style of music used in the recent Telltale Games The Walking Dead game, so I'm hoping we'll get some emotionally powerful music to compound the idea of isolation and desperation in a desolate apocolyptic world. :)

I personally disagree; in any game with a modicum of "realism" I invariably find myself disabling the music for immersion. Rather than some powerful orchestral work, I'd rather something so minimalist as to not even be there, making it all the more powerful when you actually do notice it. DEFCON's OST I think, is the perfect example of this.

Ok, we have been waiting more than a year and we can't stand, but after reading all these news I am very proud to still have hope in the game, we need to make a last effort and wait until they update this amazing game, please take your time and make things well! Good luck in your job.

It isn't an effort if we sit here and wait.