Here's a quick breakdown of what I've have been working on since my last devlog. So many hats to wear, so little free time.

It's been a while since writing a devlog, so I figured I would get everyone caught up and provide perspective from my point-of-view as lead developer for this project. Not only have we prototyped a lot ideas, but I am also knee-deep in overhauling the entire framework to make things easier going forward.

Shortly after getting the first rover - now known as "The Cricket" - I immediately wanted one with six wheels. The goal here is to create various types of rovers, each with their own list of pros and cons. I certainly wouldn't want to play a MMO where every other player's vehicles look exactly like mine, and simply swapping texture skins wasn't going to cut it. Below is the second rover design affectionately known as "The Beetle," and I am looking forward to some more Blender work in the future to create even more unique vehicles. Some rovers will be faster than others, some will have larger cargo holds, and they will all have varying maximum range values. 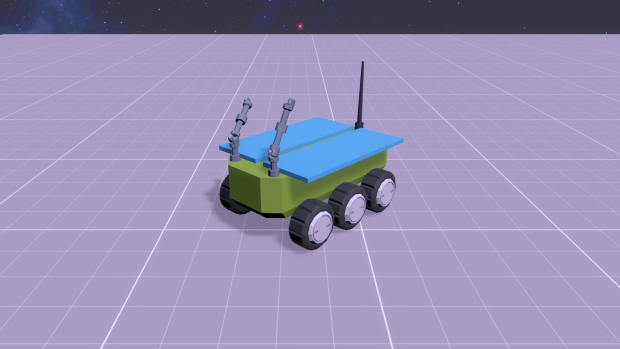 When I began incorporating remote-client syncing with regard to vehicles, things got messy pretty quickly. It didn't take me long to figure out that - due to the origin story of this project and what has changed over the course of the last several months - we were going to need to take things back to the basics and then reconstruct this game with our new goals. 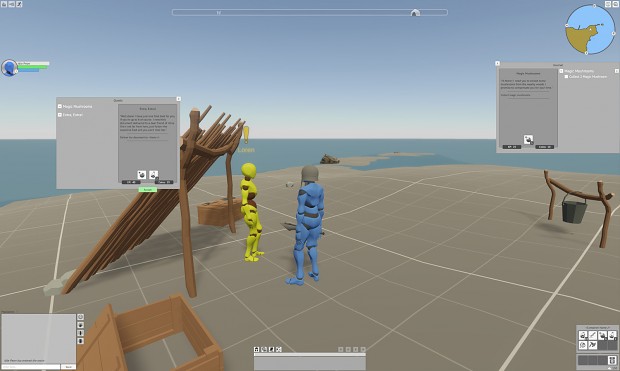 You can see in the screenshot above that this game was entirely different when we first started working on it. While those differences are incredibly apparent in the terms of visuals, they are exponentially more complex when it comes to the code that makes it all work. In fact, our entire world was turned on it's side when we went from a Unity-terrain setup (which was sea-level centric) to one with massive planets (which are planet-core centric). In other words, when you walk around in Vague now, you are essentially rotating around the center point of the planet whereas before you were simply gliding along a terrain. I had fixed the issues that centered around the player-characters, but it didn't take me long to realize that the world/universe itself was going to need a major rework.

So, we've chalked up everything you've seen thus far as "proof-of-concept" - meaning we now have specific destinations in mind and we know that not only will this game work in technical terms, but it provides enjoyable gameplay and plenty of room for growth in the future.

Roving through the flora - Indie DB

I've been live-blogging on Saturday nights via our Patreon and will continue to do so this coming weekend for anyone that is interested. As of now, I have gutted the entire project and pieced things back together up to and including [most of] the login sequence. I am already feeling much less encumbered as I work, and my code base is now as clean and easy to work with as I can possibly make it - going forward I will continue this rework this project until every aspect of the proof-of-concept is back in place and 100% optimized.

All of this is in effort to get to our first major milestone: a minimum viable product. The word "minimum" only loosely applies to MMOs, but we do hope to get a basic demo with just the core gameplay elements ready for public testing during the coming months.