Taking a look at the inner workings of the ships in the fleet, where your senior staff learn skills in order to enable functionality and direct the crew.

So lately I've been fleshing out some of the core gameplay components, chief of which is the Hero-like character-driven skill system that provides starships and units with their functionality. 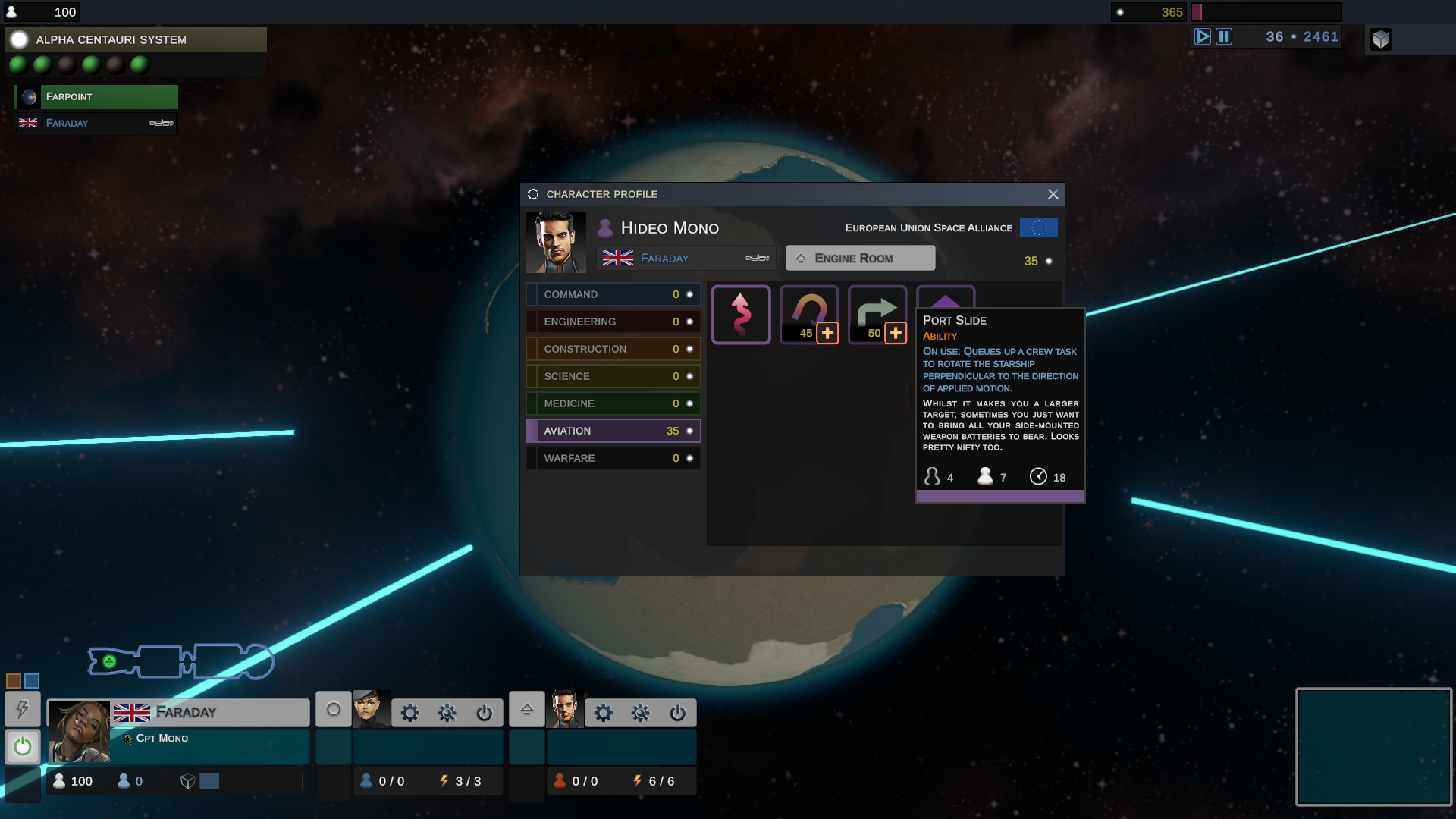 Starships carry the remnants of humanity in the form of 'passengers' and 'crew', where passengers generally act as the everyday workers, mining, farming, fabricating, soldiering and the like; whilst the crew are those trained to perform more specialist roles such as research, engineering and officer duties.

Overseeing this civilian population is the player-assigned 'hero' characters, that fill the 'captain' and senior officer slots (think chief engineer, tactical officer, chief medical officer, etc, hi Star Trek!). Once assigned to a position, leader characters can select from a bank of skills - spending Skill Points (SP) which are gained at the end of each day cycle (a day in game will be around 10 minutes real time), and through certain types of planet-based scavenging. SP is a pooled resource, so you'll have to make decisions based on the current needs of the fleet, dividing it up among your leaders.

Skills forms the backbone of everything that your fleet is capable of. No skills, no possibilities. The engine room holds the Cascade Core (think Warp Drive) but your ship can't move anywhere until an engineer character with the necessary training is placed in that department. Want to use evasive maneuvers? You'll need a pilot character with the relevant skill equipped at the helm in the bridge room. The rooms (and technology within) ultimately provide the means, but the characters make it all possible. 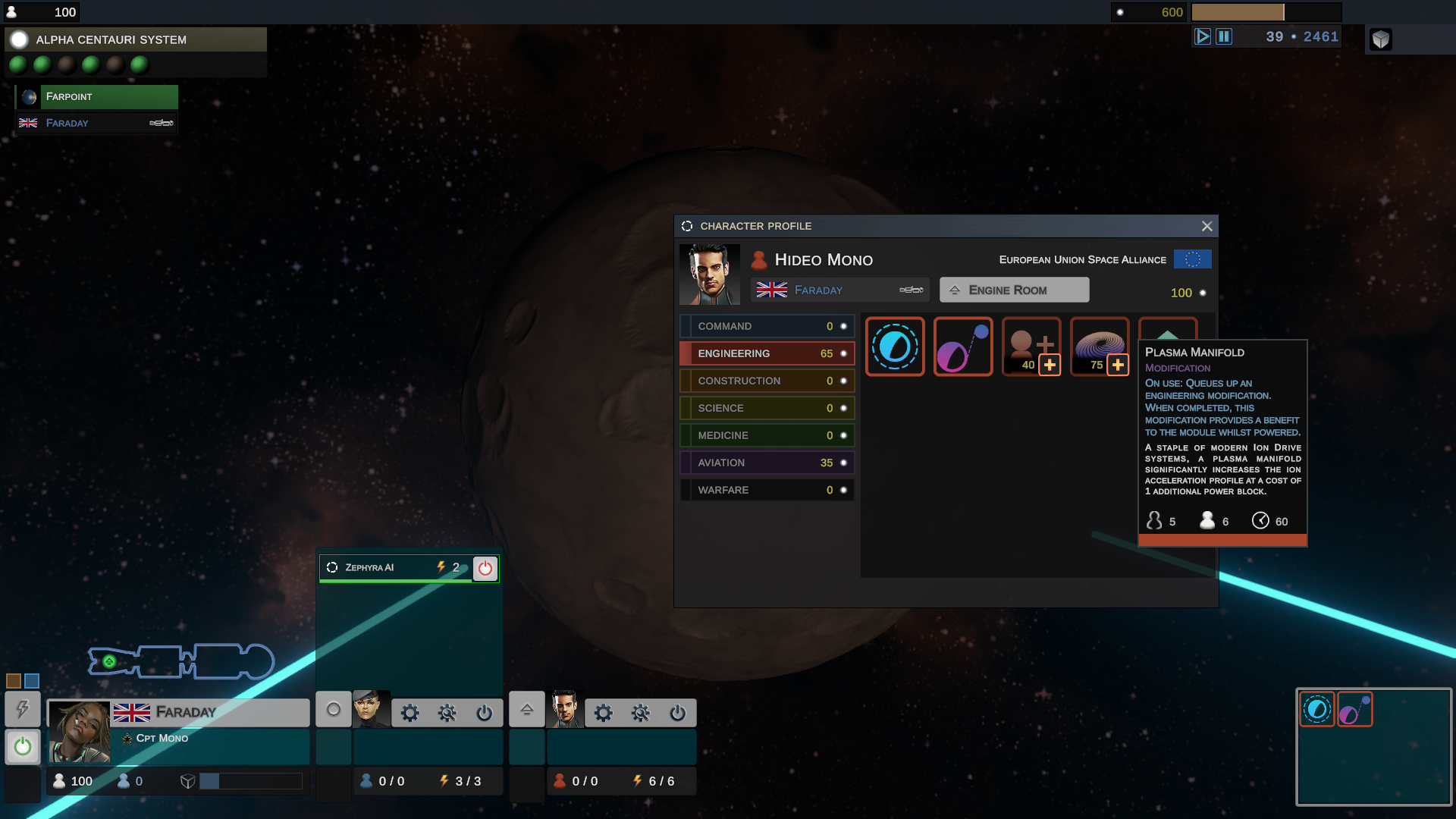 There are seven broad categories of skills: Command, Engineering, Construction, Science, Medicine, Aviation and Warfare, which map to the seven specialisations that both your leader characters and your crew can take on. Certain ship/unit modules possess an inherent specialisation, so the bridge houses command crew, the engine room supports engineers, the flight deck raises aviators and so forth. Matching that specialisation to the leader based in that department proffers extra bonuses.

Skills themselves come in a range of types, with Action skills mapping to the more traditional actions seen in RTS games, such as assigning movement waypoints, targeting enemy starships, directing a scan at something, etc. Blueprint skills provide the information to build new structures or units, modification skills add new features to existing modules, and enhancements allow for these modifications to be adapted to specific needs.

Other types of skills require an understanding of the task queue! Each module allows for tasks to be assigned based on the learnt skills of the leader character present there. As tasks are added, they are visually displayed in order of processing (much like a traditional 4X build queue), but certain skills can override this natural order, with Orders used to jump the queue (evacuate a department, go to battle stations, etc), whilst Projects sit at the end of the queue and use only the allocated resources until completion (with research being an easy example of a project). Finally, Abilities are the more general tasks that can be queued up, providing a temporary buff or negating some other effect (evasive maneuvers, provide first aid, fortify position, etc). 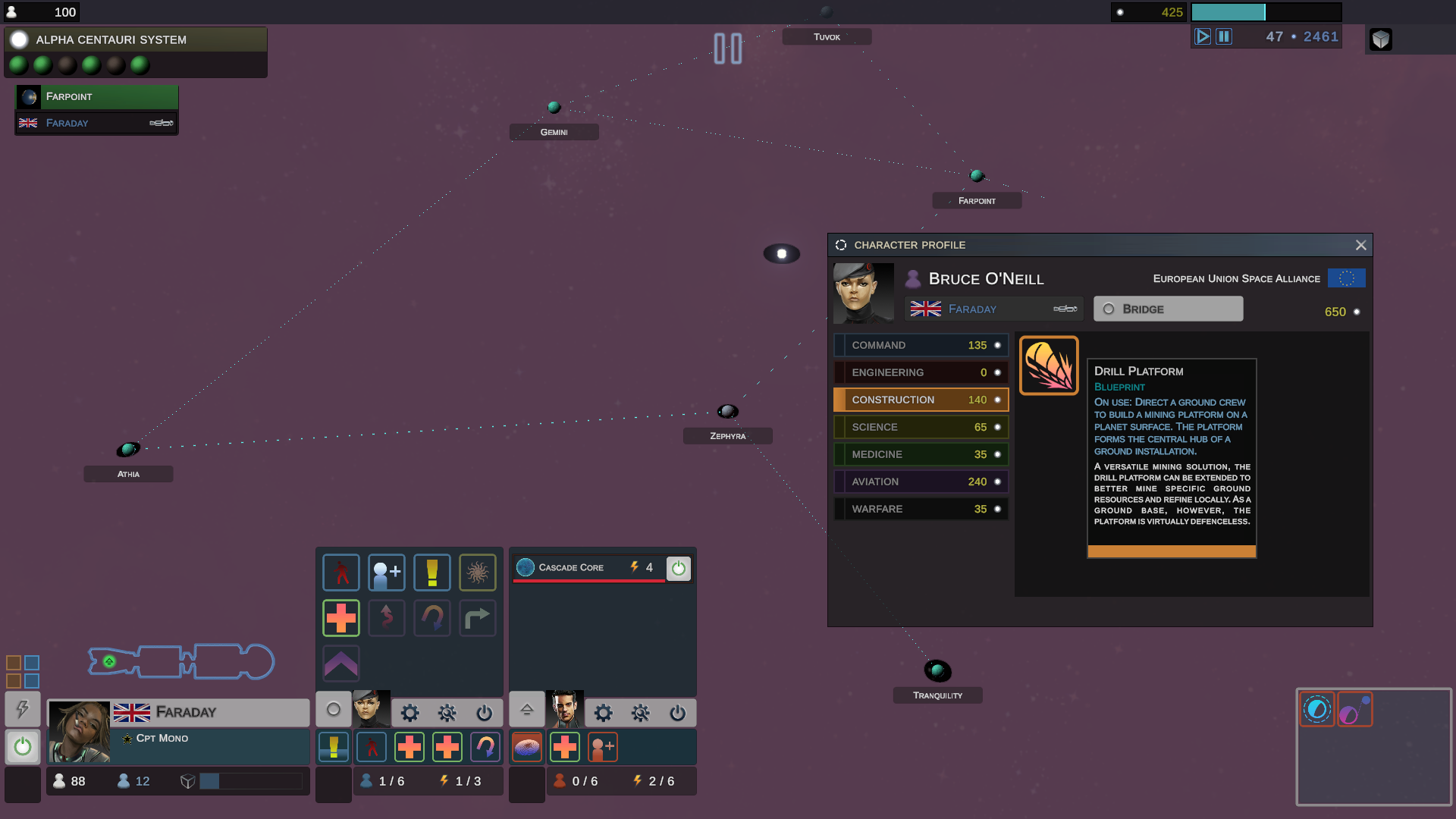 Crew and Power as resources

In order to make use of leader skills in a module, crew need to be trained up in that department. Tasks queued up generally require crew to be allocated whilst active, with crew assigned to blueprint fabrication, modification installation and projects often allocated for a great period of time. The number of available crew can thus be considered a resource of sorts, with more elaborate tasks only possible once enough crew have been trained in a department. You might then think-- well, I'll just train everybody! Welllll, maybe don't, because then you won't have enough basic workers to mine and refine things on the planet surface, and produce things like fuel and ammo, food and building materials. Striking the right balance between available workers and trained crew is part of your responsibility as the fleet commander.

Another resource will be that of power. Power is produced in the core of a starship (and generators on the surface), providing a fixed output of power that you can allocate, FTL-style, to each module on the ship. Un-powered modules can't do much of anything! Modifications installed in a module also draw power, and can be individually turned on or off, so you can tactically choose which modifications will be active at a given time depending on your needs.

Okay, that's probably a lot to take in already, I'll leave it there :) The video form of these development diaries probably makes things a little clearer, so please take a look if you're interested in learning more, and I'd be happy to accommodate any queries or requests if you have any of those to share too.