We explain our ranked system and show you our newly crafted rank icons!

Hello everyone! Last week was mostly spent with reworking the ranking system and creating the UI in the profile section. We discussed a lot about how we want to handle rankings and tiers and finally came up with a satisfying solution.

Our main goal was to have a rewarding system that motivates people to play ranked games but doesn't force them to grind ranked queue for a whole month until rewards are granted. So we came up with a season / split system. A split lasts one week in which a player can play ranked games to climb to higher ranks. After the split (the week) has ended, rewards will be granted based on the current rank and the ranks will be resettet (people with higher rank will be resettet to higher ranks so you will keep some of your rating). Since a game is over relatively fast compared to other games climbing to high ranks will be doable in one week. Also people can decide to play only for one split (a week) and get the rewards rather than playing for a whole month.

A season however consists out of 3 splits (3 weeks). All achieved rankings in the 3 splits will be added (in some way) together to get a final total ranking for the whole season. Based on this total ranking more rewards will be granted. The profile screen will display the current ranking of the current as well as all passed splits of the current season. Also players will be able to browse back to a few passed seasons the view their rankings and progress. Also the global total ranking of the season can be viewed in a leaderboard view that displayes the top x players.

With this system players can decide if they want to play only for one split (one week) and get rewards for this single split or if they want to play the whole season and get more rewards in the end. The main goal is to have the possibility of a constant income of rewards which will be more motivating for players than compared to other games. 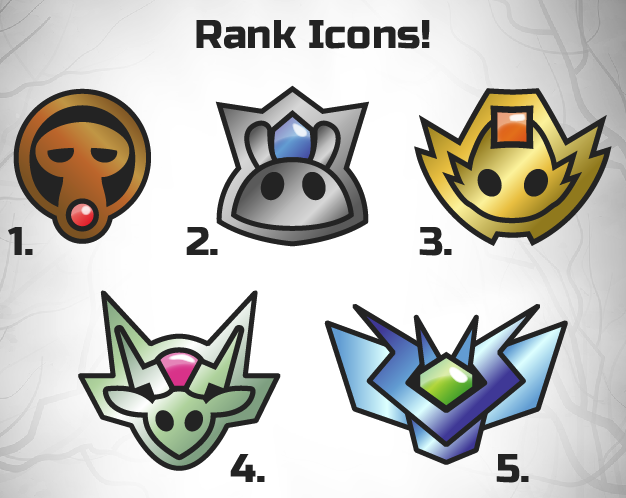 The ranking tiers will be separated in Bronze / Silver / Gold / Platinum / Diamond / (and a special rank on top of that).

Each rank tier comes with a nice icon which was teasered in the #media channel of our discord. (Can you guess the associated rank?) that will be displayed in the profile and in the game screen. To climb to one tier one has to gain 100 pts to get promoted. A win vs a player of similar rating will grant somewhat between 10 and 20 points (we will balance things out after some tests) so climbing in one week will be possible with a justified amound of games.

After deciding for the ranking system I started adapting things on the server to implement this. First of all since we decided to have a ranked queue vs bots (which will be a pve challenge since bots will get better decks the higher the ranking is) there were some changes required to enable this. This changes for ranked and unranked bot games have been completed this week. Only left to do are the changes for unranked / ranked vs player games. However this should be done quite fast since it is quite similar to bot games.

This week I will start with implementing a ranking "manager" that will keep track of current seasons/splits, end splits once the week is over and calculate the total ranking of all 3 splits. Since we didn't decide yet what kind of rewards a player will get this will be added at a later point. However there will be free cardpacks for sure at some point.

The next task will be to add the UI for the profile screen so players can see their current and past rankings - which will be really nice.I plan to finish the whole ranking system this week so another point on our to-do-list can be marked as done.Have a nice week you all an thanks for staying by.

In this video by Akira, he shows off a deck he built, how matches play out AND he opens some card packs. There's a lot to do in such a small video.