We’ve made some really good progress in recent weeks and understand Unity a lot more now too. So far I’m loving it, in particular the Asset Store, which is an amazing resource. So a quick recap on Vektor Wars – it is a retro vector GFX first person shooter. Visually a homage to the whole 80s sci-fi/wireframe look with gameplay influenced by a love of classic shooters such as Battlezone, Bezerk & Encouter.

We’ve made some really good progress in recent weeks and understand Unity a lot more now too. So far I’m loving it, in particular the Asset Store, which is an amazing resource.

So a quick recap on Vektor Wars – it is a retro vector GFX first person shooter. Visually a homage to the whole 80s sci-fi/wireframe look with gameplay influenced by a love of classic shooters such as Battlezone,Bezerk & Encouter.Since Part 1 a lot of stuff has been added – player weapons, pick-up system, the first batch of enemies, sound effects, particle effects and other eye-candy along with a more cohesive design and plan for the different game modes and special collectibles.

You can recap on Part 1 of the Dev Diary HERE.

We’ve added the first pass of the player weapons – I think you could call this the Doom weapon edition as we have added the basic, familiar sounding weapons:

So a nice core set of weapons to get started with. I will also be adding a few more weapons which I shall have more details on in the next update.

I tried various experiments with different graphic styles for the on-screen guns, but couldn’t really get anything that looked right – so in the end I ditched the on-screen weapons and went for a different HUD style approach. So the different weapons each have their own unique HUD graphics and cursors, with muzzle flash animations – and the HUDs move and bob as you move and look around. I like it – feels very 80s VR and a bitIronMan-ish. 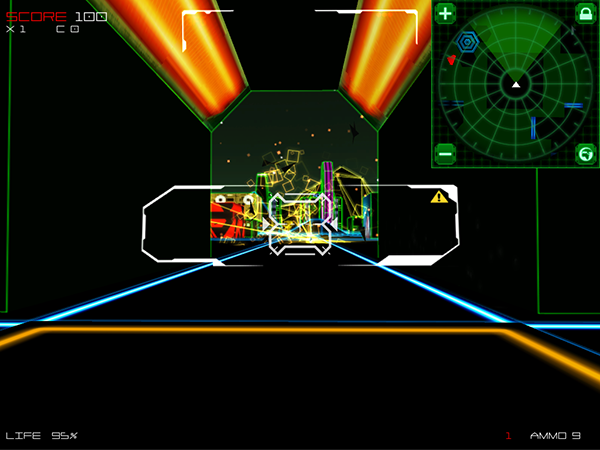 As scoring will be the main focus of the game, I wanted to have a nice visual system for presenting score updates and other game messages. I found a plugin called Score Flash, which does just the job – so now all game messages go through this with the text scaling up and fading out nicely. You can also add it to the enemies, so it gets drawn in 3D space, for example when you destroy an enemy. 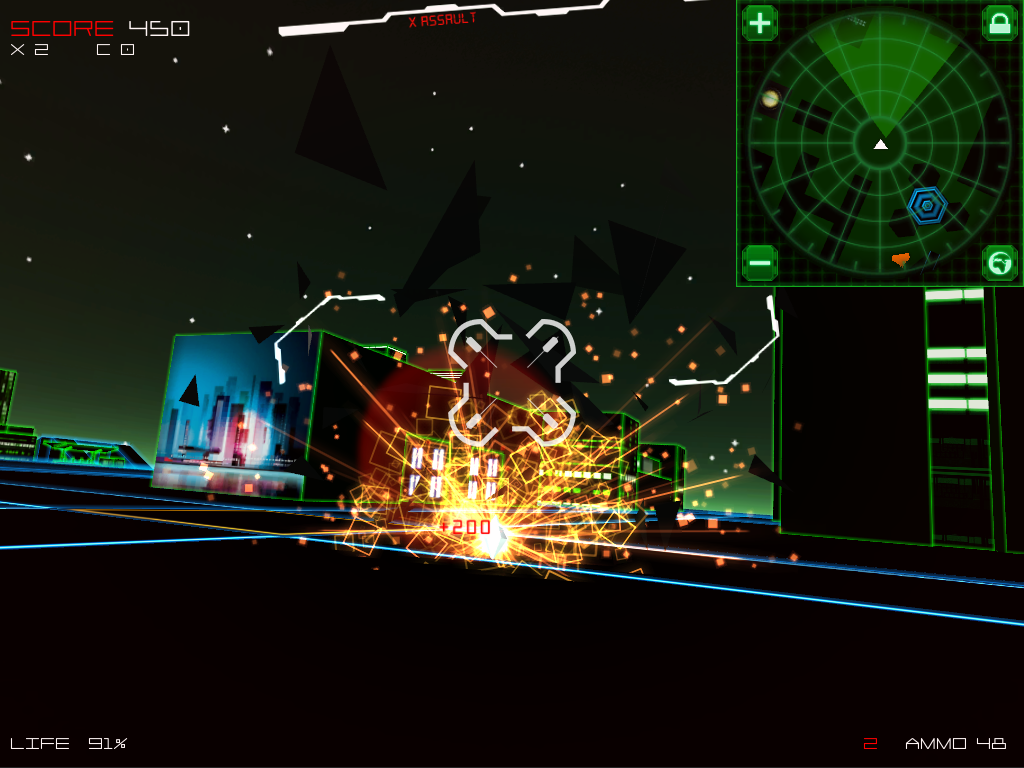 I wanted to make the explosions fit in with the vector style, so geometric shapes with lots of glow but not at all realistic looking. Unity particles are very flexible, so with a bit of practice it was easy to make up an explosion with a few different components (a central core that expands, light beams expanding out and Defender style square particle showers).

I also plugged Score Flash in here so that when you destroy the enemy the score displays too – and takes into account the current score multiplier. Nice and arcadey.

For the first World I have added 7 different enemies, which range from a lightweight grunt type enemy through to a master robot style enemy.I’ve put together a few Top Trumps style cards below to show the enemy designs and stats so far. 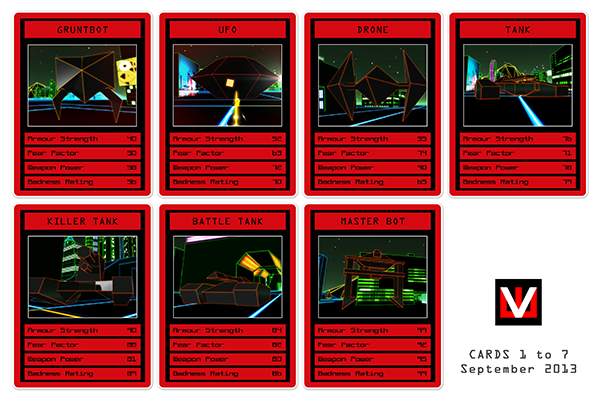 Plenty more tinkering has been going on here (with Steve’s coding help) and it is getting better and better. I have spent a lot of time tweaking speed, aim, damage and other core values to get the basics feeling right. I encountered one issue with the enemies falling in the water – took ages to suss this out. Basically they were going too close to the edge of the ground and then dropping off into the water – and as they weren’t allowed to be there they got horribly confused.

In the end it was a super simple fix – in A* there is an Erosion iterations setting. I upped this to 1 and that brought the grid in away from the edges and no more falling enemies!

Since Day 1 I have wanted to get a retro style computer interface in there – similar in function to those menus you had when logging onto computer consoles in games like Paradroid and Alien Breed. Visually/design wise I wanted a real 80s feel for this – similar to some of these reference pics I collected from various 80s sci-fi movies and TV shows. 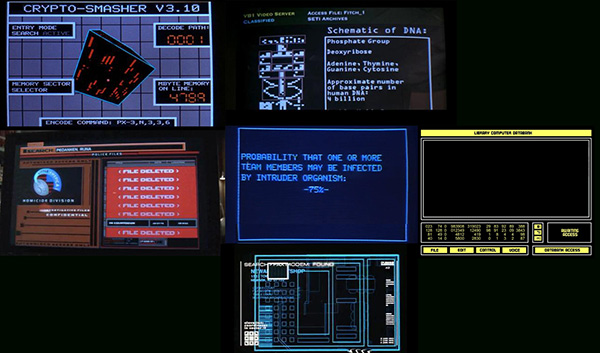 Initially we are going to have two game modes – an Arcade Mode and aStory Mode; and it is the story mode I had in mind with the computer system stuff. Your PDA will receive messages from home which will start to tell a story about you, your background and about what is happening with the robot invasion.

So I got cracking with a GUI tool and started laying out a few screens and adding text via an external text file (so it is easy to edit and ready for if we localise the languages). I also wanted to get a scan lines effect – which was nice and easily achieved by overlaying an alpha lines texture onto the camera. One slight bummer is that our budget at the moment doesn’t stretch to Unity Pro licenses – I’d have loved to experiment with some chromatic aberration/analogue TV type full-screen effects. 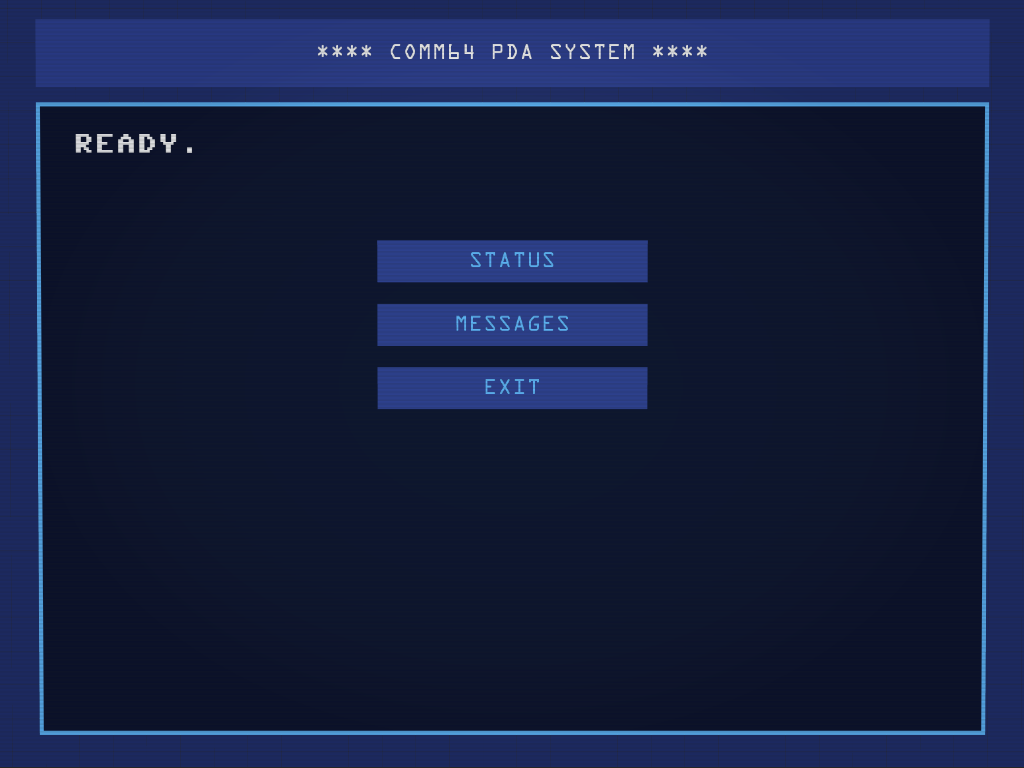 I used fonts that matched closely to those used in the reference images I collected, and I must admit I have quite heavily based the player’s PDA readouts on the old C64 boot screen (as you can see here). Took me ages to find a good sound effect that didn’t grate on the ears to go with the type text animation.In addition to your PDA interface there will be computer consoles in the levels that you can log onto. These will all look different – with black and red, green screen monitor and other colour schemes, possibly more influences from other 80s computers like Commodore Pet, ZX Spectrum, etc.

Every game I’ve ever worked on we’ve stuck with either a fade to black, or if we were feeling fancy a white out. Never really had the time or know-how to do a decent system of video style fades and transitions. Once again the Asset Store was on hand, and we found a nice script that uses Luma Matte textures to fade to black (or any other colour). Very clever stuff it is too – basically the matte textures are just grey scale images and these determine how the fade happens. The lighter and darker areas fade in at different rates – so it appears to animate and you can do all sorts of funky transitions.

I tweaked a few bits and pieces in the city – added detail on the rooftops, added a few more buildings and monuments. I also changed the bridges around and made them wider so the enemy AI can cross them easier.

There are also ladders in the water now, and we have started adding in the special PowerCubes you need to explore and collect. We really want to encourage plenty of exploration. I have to add a glider/jetpack in there!

The pickups system is all done now for weapons, ammo, multiplier tokens, power-ups and so on. I’d say World 1 is just about ready to go now… 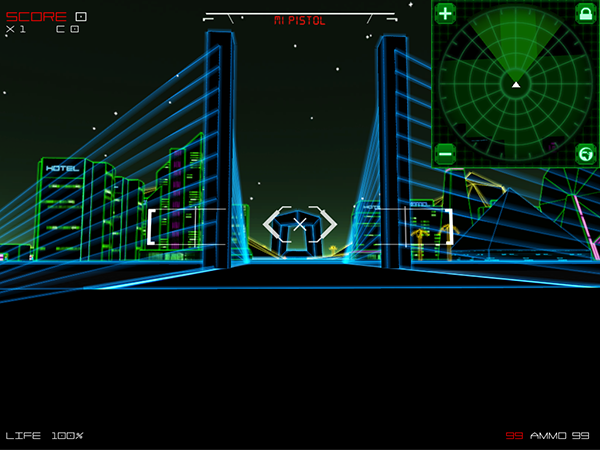 Oh – nearly forgot – enemy waves. Again another Asset Store job here –Killer Waves; which has given us a robust system to add enemy waves and levels in easily. I am currently playing with the first level waves and I’m getting something solid now. This was the point it started to feel like a game, which was very exciting, and a little daunting.

I donned my headphones again and got stuck into the sound effects (not music yet – hopefully the superb Gavin Harrison will be helping out there). I have some really nice sounds now for the weapons – good meaty sounds that really pack a punch.

Enemy sounds are also taking shape – I have been experimenting withBezerk style robot speech effects. I used the speech synth in FL Studio (v11) and ran the results through a couple of effects, including the brilliant FL Vocodex. They sound good and threatening now – but I do need to make a few of them a little clearer so you can understand what is being shouted at you.

And lastly spot effects – using a few C64 style SID sounds – just deciding if they fit at the moment. 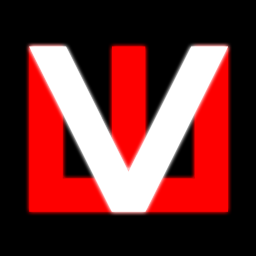 I am planning a funded Alpha I think – seems a good approach because a. we’re broke and b. it allows me to really get chatting to the community and getting feedback as I progress. I love the idea of user input through the later design stages; seems to me that is what the spirit of indie development is really about.

Still thinking over the plans, so I’ll probably post more on that next time. One thing is for sure – it will lead on the computer formats (PC, Mac, and Linux), so I am trying to brush up on my knowledge of releasing indie games on computer. The last few years for Icon have been consoles of one form or another, so this is new territory for all of us, any tips or advice here would be much appreciated.

Right – back to work for me. I’ll be doing a few videos for the next update, so watch this space.

I always loved the wireframe style of graphics. Thx for the eye candy!