Hello Creator, Today, The Universim officially moves into the Alpha Stage of development. This means that a lot of the core game mechanics are now in place and we will begin adding new content and eras in the coming months.

We are back once again with our usual round of bug fixes, optimizations, and new content. However, we’re also introducing you to a rather unusual specimen of the Nugget species. This erratic, demented, and somewhat ingenious Nugget is called the Witch Doctor, and they’ll be taking care of your people’s ailments from now on. Those poor, unfortunate souls… 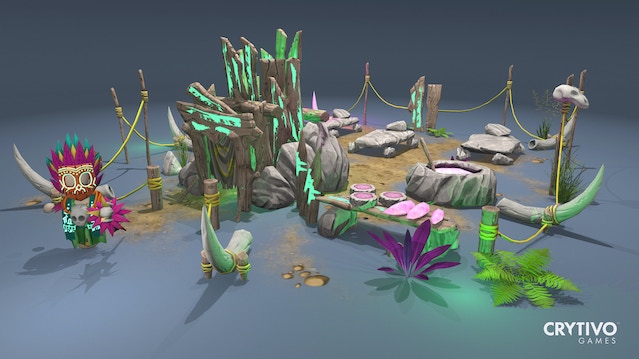 This means that Nuggets can now fall ill (well, become unwell when falling in general, really) and get hurt while performing certain tasks. They will thereafter require medical attention from the local Witch Doctor in order to recover. Witch Doctors spend their days collecting herbs for remedies and “treating” the sick and injured. You’ll know something mildly toxic is brewing when smoke rises from the Witch Doctor’s hut. But, hey, at least it’s better than no treatment at all, right?

We are also officially moving on to Alpha from Pre-Alpha (yay!). In this Patch, we're introducing a prototype version of the Nuggets’ artificial intelligence update. You'll notice a lack of Resource Gathering controls and other micromanagement controls that you had to use earlier in order to control Nuggets. This is just the beginning of things to come, and we're working on a far more complex version that will allow Nuggets to make wiser decisions and live their life like more organic creatures. It is a very challenging task, but we have the foundation now.

Let’s talk about where we’re at right now. We're very nearly done with Stone Age mechanics and have begun working on the advanced Nugget AI and City Expansion mechanics. After these two major systems are done, we're going to move a lot faster. There are plenty of things in the pipeline that are not yet ready for testing, but stay tuned for some incredibly awesome content in the future. The first iteration of the Creator Power menu is also being added. More powers will follow in future patches, but you should definitely take a look at the mini blog at the end for details on the current powers and the system in general. Be sure to read through all of the changes on the way, too. Many are very significant.

Thank you all for your amazing support and love!
Crytivo Games Team.