Character sheet for Jay'Dan, the protagonist in our game.

In Noverat you will be playing as Jay'Dan and you will be weaving his story the way you want it. But here is his story previous to the events in the game.

As a child, Jay'Dan was very intrigued by stories of the Shapers, particularly about the technologies that were said to have existed during those ancient times. That knowledge was all but lost now, but Jay'Dan would dream about setting off on a journey through the wildest regions of Kalandria, were no man had set foot since the departure of the Shapers. There he would explore ruins, find secret passages, escape traps and battle ancient guardians left behind by the Shapers to protect the precious knowledge from falling into the wrong hands.

Those dreams never came true however. At a very young age he was taken into apprenticeship by the blacksmith in Tynam, a mining settlement in the Iron Mounds. His superstitious master soon beat all thoughts of the Shapers out of him. So he set out to work hard at the forge, his innate curiosity helping him learn advanced weapon forging techniques quickly. 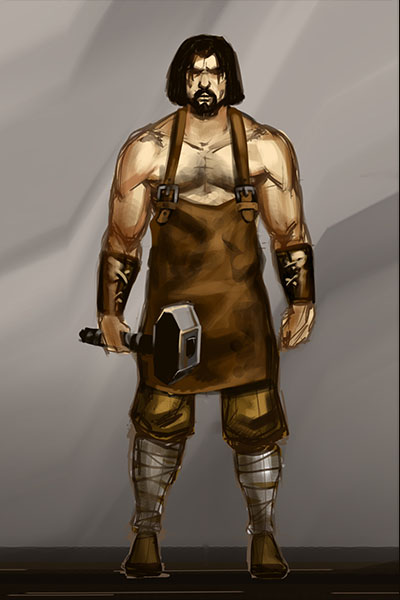 So we was soon able to move to Valleon, the largest settlement in the Iron Mounds, where the former blacksmith left him his forge. Jay'Dan was able to turn it into the greatest source of trading power for Valleon by building the most significant bloomery furnace in the Mounds. This unique structure allows him to smelt the highest grade iron from the ore brought up from the surrounding mines. Now Jay'Dan turns a decent business creating high-grade wrought iron widgets and bars for the alchemists and engineers of Carrendane, and has the highest turnover of steel weapons compared to the other two smithies at Elquin and Tynam. This supply of high quality weaponry and specialist tools means that Valleon has become the significant trading stop for the merchant caravans travelling between the Iron Mounds and Farnarium.

In his early thirties now, Jay'Dan is content with his lot in life. He knows his smithy plays a significant role in the survival of Valleon, and is happy to know that his can provide for himself and his town with the skill of his own hands. He does not see himself as a warrior, despite having a greater strength than many of the trappers and miners that live in the town. When in their cups, men will laugh and challenge each other to try wrestling the "Iron Bear", but Jay'Dan never indulges the challengers.

He has no family; womenfolk are scarce enough in the mining settlements of the Iron Mounds. The closest thing he has to a family member is his striker apprentice, Wesley. He knows the boy's heart is not in smithing, but he hopes to break through the boy's daydreaming and teach him the way of the anvil and hammer to save the boy from a miner's life.

So this is Jay'Dan's story up to now. How will you continue it?

Interesting, I can't wait to read the rest of the lore and to see the game!