Character sheet for Dakkal, one of the NPCs in Noverat.

One of the characters you will encounter in Noverat is Dakkal, which some of you may remember from the "Last Caravan" short story.

Not much is known about Dakkal except that he has traveled a great deal in his time. In his youth he used to venture through the most remote areas of Kalandria as a treasure seeker, some say, looking for artifacts and other remnants from the time of the Shapers. He has even braved the Petrified Waste, with its traps that turn any living thing into stone and the Gheonoi, always searching for "shinnies" and fierce to protect their lairs. Whether he actually found anything of great value during those times remains unknown and he's quick to chase away anyone who asks him about it.

When his adventuring days were over, Dakkal started running errands for the Engineers Guild, leading caravans and trading for the Guild. Soon after that he was able to purchase a merchant's license in his own name, but despite any wealth he might have accumulated over the years, he has never considered settling down. Thus it is that now, despite his old age, he still roams Kalandria at the head of caravans, living the simple life of a traveler. 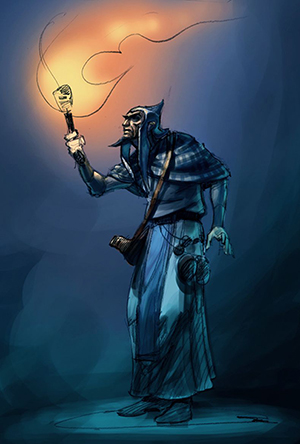