What a great time to be a Gamedec fan! March was one heck of a ride with a CGI trailer made almost entirely in-house [kudos to Tomasz Bentkowski!] and the second demo's release. But that's not all – let's recap what we've done in the past month.

Posted by wojdylakrzysztof on Mar 31st, 2021

What a great time to be a Gamedec fan! March was one heck of a ride with a CGI trailer made almost entirely in-house [kudos to Tomasz Bentkowski!] and the second demo's release.

But that's not all – let's recap what we've done in the past month. 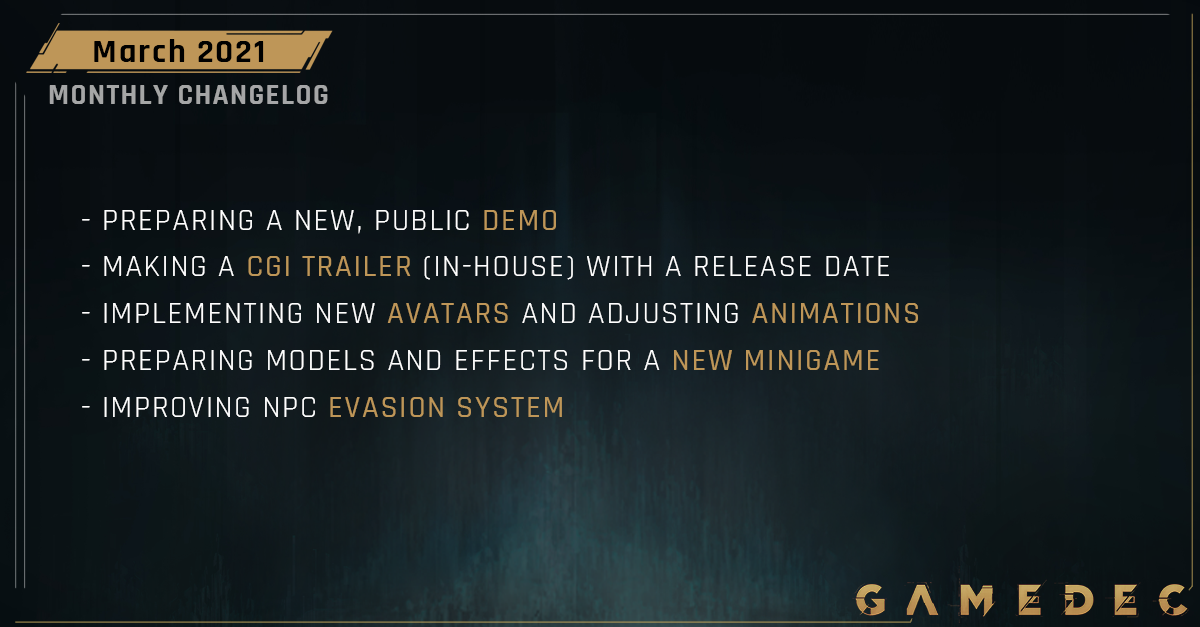 This task was the top priority for our Gamedec Team. We promised a new bit of story to our fans and backers, and we delivered it without any delays. The free demo available on Steam and GOG.com will take you to the streets of Low City, where a mysterious murder has to be examined. The demo is not time-limited, but it will end when you reach a certain point of the case. If you're a Kickstarter Backer, you will get access to an extended version of the demo, where another location will be available – a bar ran by no other than Old Yet, a military veteran.

Even if you already saw these two locations before, they were slightly redesigned and went a complete lighting and VFX retouch. I mean, have you seen the rain in Low City? The neons on buildings? Try talking to Sgt. Brut if you're not afraid!

The demo is available on Steam:

If you already played the demo, be sure to share your thoughts on either Discord or Steam discussion boards, where we lurk in the shadows and note everything for the glory of our bright-minded designers and always hungry QA team members.

We wanted a CGI trailer. We felt that Gamedec deserves it to tell a story and intrigue those who didn't know about the game yet. Fortunately, our very own Tomasz Bentkowski mesmerized us with his usage of the Unreal Engine. With a bit of help from Quixel tools, he created astonishing and climatic environments we couldn't wait to share with you guys. If you haven't seen it yet, here's a direct link:

From the gamedec's apartment through various virtual worlds, we tried to explain what a gamedec profession is.

Did you like it? What do you guys think? 😊

The abovementioned trailer debuted on the Future Games Show 2021 and contained one huge reveal – a release date. That's right, Gamedec will hit the virtual shelves on the

That's less than six months from today. No pressure, guys, no pressure at all 😉

We've spent some time with our concept artists and made avatars for major and minor NPCs. Their hard work can be seen during dialogues and in the Codex. It's always better to see the character, to visualize it. That fulfills the need to match the name and image together, creating a better context. At the same time, we had to adjust some animations for the in-game 3D models because, you know, there is always room for animation improvements, especially when you change the main character model for a female this time. You have to make sure that the animations match the body type and won't look clunky. 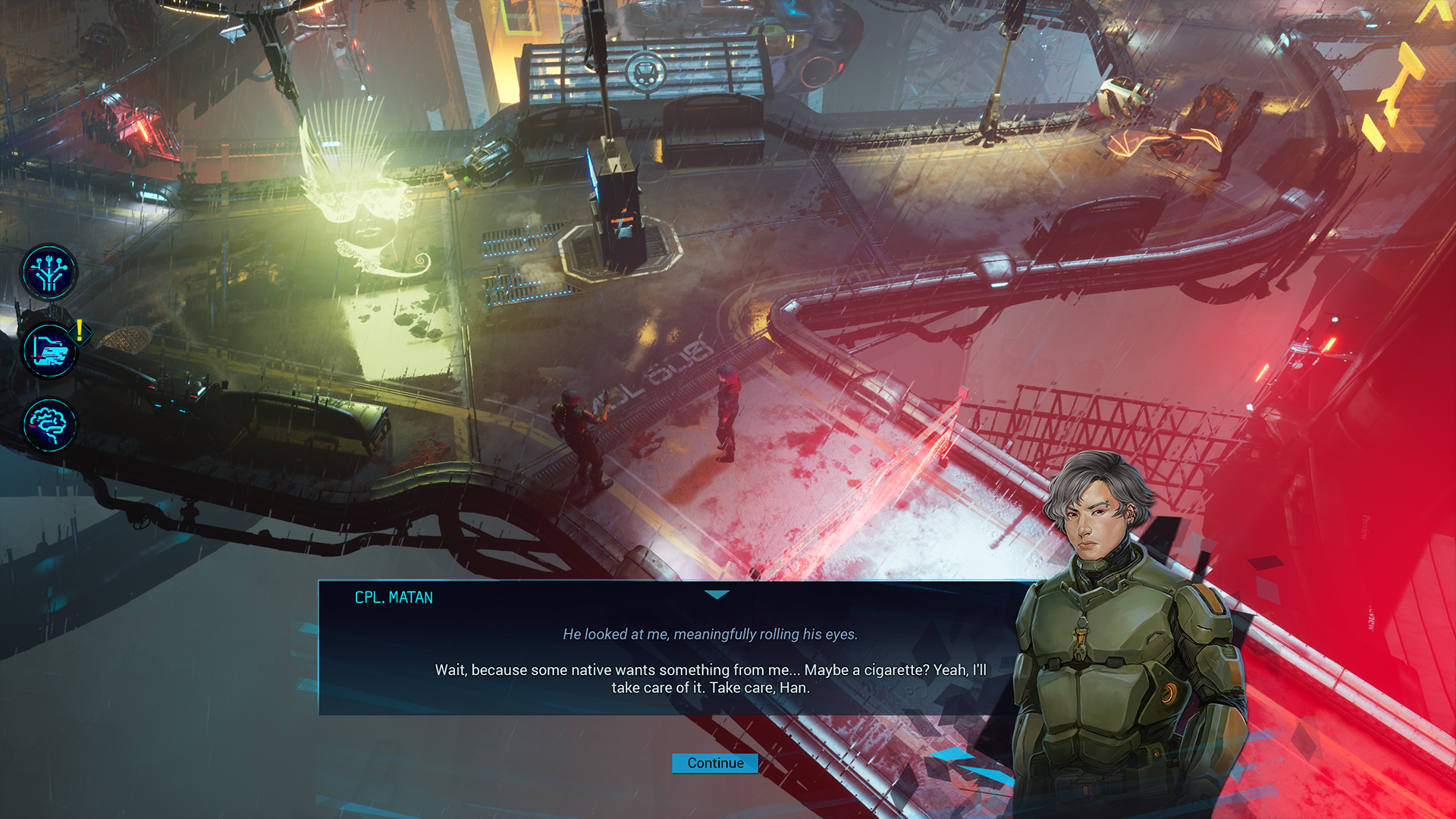 Preparing models for a new minigame

This one will have to remain a mystery. No one likes spoilers, especially in a story-driven game. Patience, young padawan, the time will come. 😉

While working, we've noticed that some NPCs liked to bump into each other and cause some disturbance intentionally. We've spent some time polishing the paths and teaching them how to walk without making too much trouble, so they won't be these weird peeps who never know how to behave on a crowded street. It may sound easy, but it's something immersive-breaking, and we had to take care of it for the sake of everyone who was triggered by it—your welcome, people of 22nd century Warsaw City. 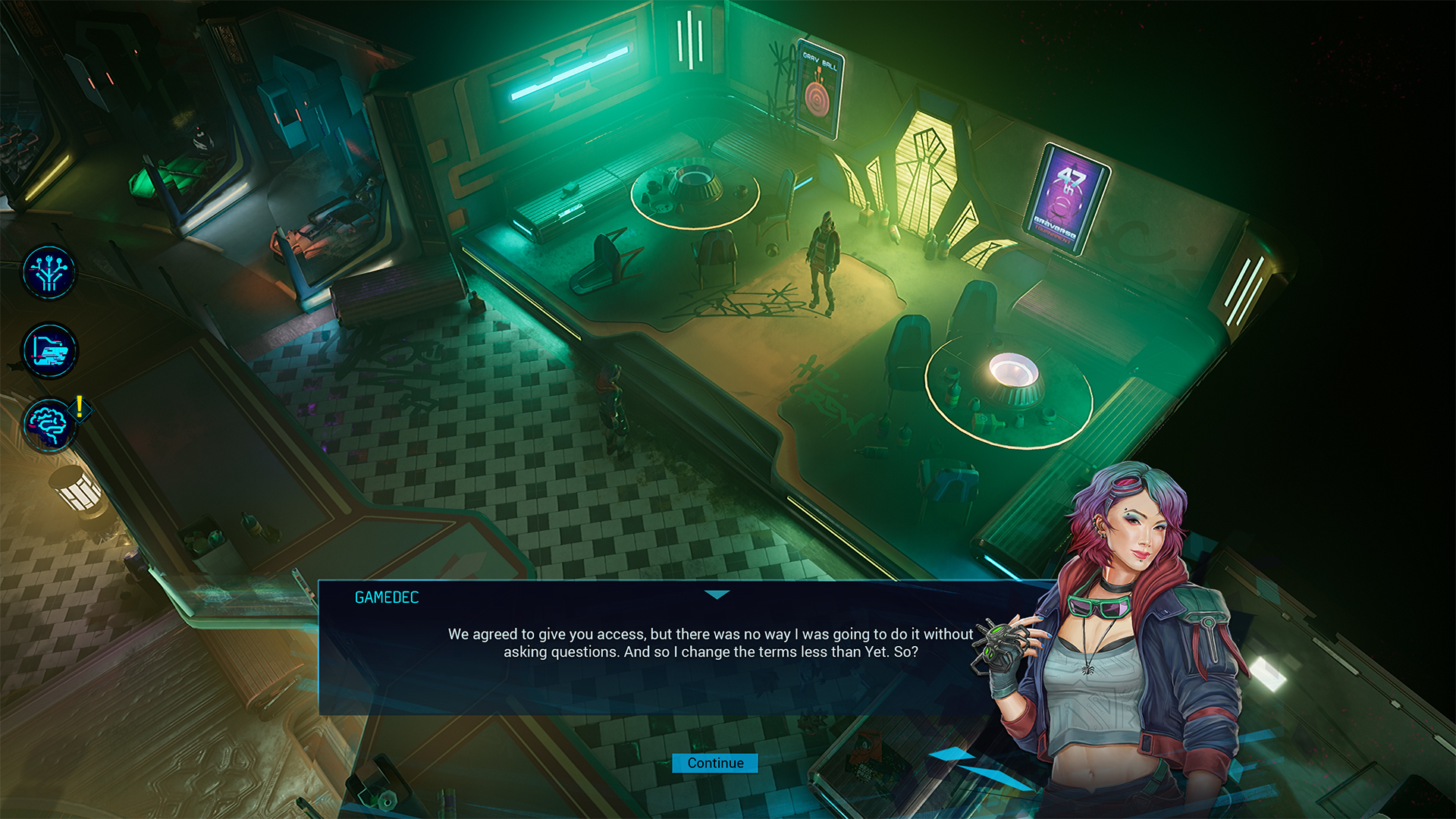 There's more, but we tried to focus on the most critical aspects of our work and leave something behind the curtain. It was a challenging month for everyone in our studio, but once again, we proved ourselves to be working well, even with an inevitable deadline.