Evening all, it’s something of a ‘work in progress’ update this week – seeing as we’re hoping to have some decent NPC and West Point stuff to show off in the next exciting episode of Mondoid. So just what have we been doing with our time this week?

Test Buildin’!
Survivors helping us out with bug-chasing in the test builds on our forum will first and foremost be aware of some of the successful FPS optimization we’ve now got running beneath the Zomboid hood. We've added multi-core rendering support y’see, which should yield significant FPS boost on multi-core machines.

(This will be automatically turned off for those running PZ on single core machines, and on some Linux systems. The lack of some Linux system’s multi-core love might be fixable, there is hope, we’re just going to have to keep prodding it for a while).

On top of smashing bugs that this new system has created for build 17, we’re also now working on improving inventory/world context interaction. Much of Romain’s work currently is about balancing and soothing interaction woes. For example a double click in the loot inventory will now grab the stack or item. Within the world it can also be tricky to drink at a sink or fill a bottle – and we've changed the way objects are picked for right click menus to make this easier. We're generally just polishing up bugs and making what's there as fun as possible, in preparation for NPCs.

In other news: teleporting crops are now fixed (huzzah!), while invisi-walls remain a massive pain in the arse (grumble!) - however we have a few leads we are following and are quietly hopeful.

Supportin’ Moddin’!
As anyone who uses mods will know, the current method of handling mods leaves a little to be desired. We added lua support to add release-friendly modding, but then mods need for you to overwrite game files in order to work. This meant if anyone had mods installed and updated the game, their save could become incompatible if they didn’t have the same mods installed.

As such, we’ve taken the plunge and added some proper modding architecture, so a user can tick to enable/disable mods. Each is stored in a separate directory, and the files in the mods just‘override’ the base files - or each other depending on the mod ordering. This will make it much easier to maintain installed mods, as well as mean they stay installed between new versions. 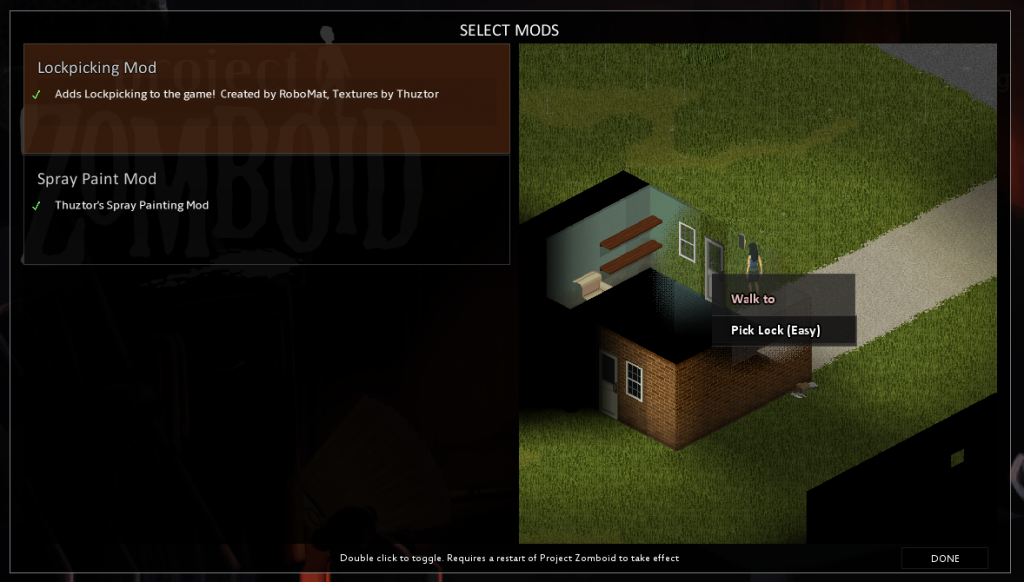 We’ll be starting a new series of mod blogs on the main PZ site this week, so soon there’ll be no excuse for not getting down and dirty in the modding community!
NPC’n!

As usual a lot of NPC work has gone on this week. The focus of this being character movement. Not the animation, but the way that in their previous guise AI survivors always walked in tile-by-tile units, and only ever in 8 directions.

They were always a little robotic, really, and as such we’ve had some interesting ideas that may allow for NPCs to move more realistically, and look a lot more engaging.

We’d hate to leave you bereft of video action though, so here’s a sneak peek at our experimental system that’ll allow NPCs to have realistic movement around the map, in real-time. We’re pretty confident that we’ll have a more tasty video next week on this front (nb. pretty confidence is not legally binding).

I like new NPC moves. Looks awesome and realistic

Realistic? Looks careful and intelligent. Feel like I romp around like a careless fool in comparison. lol

My english is bad. That's why.

Wouldnt you be careful when there are hordes of zombies wandering around, which may be quite tough and fast, plus maradeurs, who may be even more deadly?..

lol I wasnt disagreeing with Nick's comment. I was only trying to emphasize how well the npcs were moving by pointing out they are doing a better job then I do.

well yeah, im pretty careless too, tryin to get to anywhere as fast as it is possible, grab everything that is worth having and rushing out with a bunch of dead onto my ***...

Well an unfriendly NPC taking a walk in my house is going to scare me. I'll walk into a room and probably get my head blown off since he's tucked into a corner. D:

But with Roh's comment, will there be different.. "styles" of movement for every NPC? Like the one shown would be really careful, and while other NPC's would just kinda walk in or be aggressive smashing in windows, etc.?

yeah, There must be other types of npc movements, like different movements when panicking, injured = limping, while doing loot missions, and etc

Will survivors react differently to houses with light turned on and off? Or reach the switch upon entering, or turn towards it if someone switches the light? Will they react to flashlight beams?

Nice. Keep up with the awesomeness.

*Thinks if terminator then pings back to reality* Hmmmm the NPCs look pretty awesome but they also look very scary. *Has flashbacks of a war between robots and humans* But i would make sure that they aren't too smart. *Wispers* They maight be the first step of skynet! what will we do?

Check Black&White and Creatures for some AI behavior bizzarities, quite a lot of people scratched their heads back then, after seeing some decisions made by AIs there.