A few feature updates we've added to Crimson Spires to fill out the larger world, as well as an update on story progress.

A few months ago, we considered trying to make false interior windows in the style of (among other games) the PS4 Spider-Man game. It was a half-realized thought that we didn’t follow through on because we weren’t sure it was worth the effort considering the lofi visual style of the environments.

Well, it turns out there was a good reason to start looking at fake windows, but instead of false interiors we were motivated by creating false *exteriors.* There aren’t too many times you’ll be wandering around inside a house or other area in Crimson Spires, but in the few instances we had, we found that the black reflective material didn’t quite create the effect we wanted. It was just too reflective and looked like everyone was blacking out their windows with paint. That might work for our conspiracy-theorist Thomas Wagner, but characters like Erika and Maddy wouldn’t be doing that sort of thing.

With this in mind, Malcolm decided to re-explore the idea of using bump offset to fake depth and create some background images for windows that look outside. To do this, we created some textures based on screenshots of the open world and built a shader to adjust their depth based upon the angle of viewing. Bump offset isn’t quite as good at this as it is at fake interiors, but given how rarely players will actually walk around the windows to see the seams, we think its an effective way to portray exteriors without having to build out some small version of the 3d world outside every interior level. 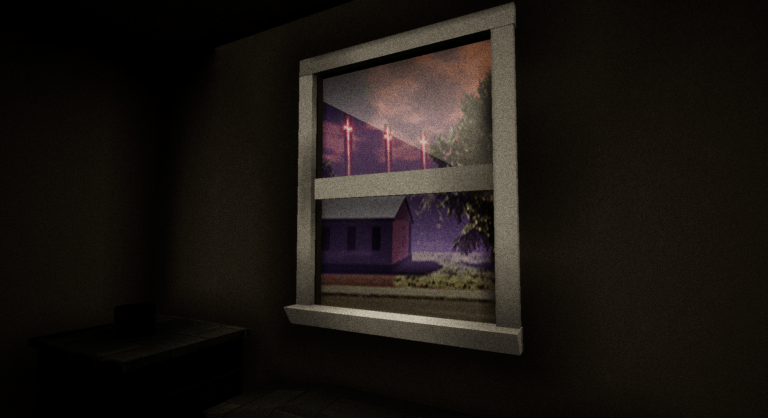 This is completely placeholder, because we haven’t taken the final screenshots for the material yet. When we do, we’ll actually take three–one for day, another for dusk, and finally one for night. Using a vector material parameter, we’ll fade between them to correctly show time of day.

Once this was done, we had to give the fake interiors another shot just in case we wanted to use those as well. They look better in motion than the fake exteriors, so we may end up using those as well.

BLOCKING OUT THE SCENES THAT BLOCKED US

In March, we passed an important personal milestone: blocking out the sequence of the story that gave Jenny writer’s block for so long. This was a segment of the script that she rewrote at least 5 times. She started to fear she would never find an iteration of the script that was solid enough to keep building upon.

At long last, adding one of these scenes to the game felt like confirmation that she was on the right track again and ready to keep going.

Here’s later in that scene, blocked out in UE4: 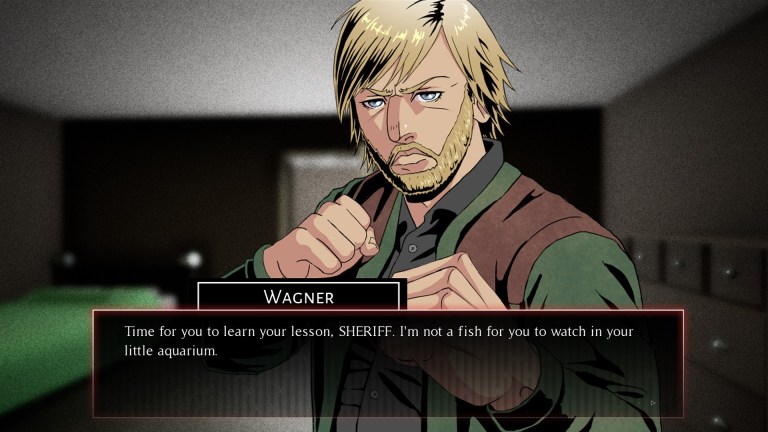 This whole scene didn’t even exist until Jenny’s final rewrite of that story sequence, but now it’s a pivotal moment that ultimately brings Erika and Julian closer together.

While working on Crimson Spires, Malcolm started to worry that the world felt a little too static. While we’re still going for a look that evokes older 3D games on simpler systems, we thought some movement in the world might make it more interesting. To accomplish that, we modeled and added a handful of new props.

While no one drives in Bataille, we thought it wouldn’t be too unreasonable to think that no one ever bothered to take down the streetlight. Is this just sleight of hand to let us make a small Twin Peaks reference at some point? Maybe.

It wouldn’t be small-town America without a lot of American flags flying across the town. Since we have incorporated weather effects, we thought the flags should be affected and created this prop with that in mind.

We’ll continue to add other less-than-static tweaks to the environment as we build it out, hoping to make it a more interesting place to explore.