Magicite is a 2D Multiplayer RPG that focuses on slaying epic monsters, getting loot, crafting and PERMADEATH! Players must be wary on their adventures as they explore randomized instances of various biomes. Permadeath is what makes this game different from other games. Although there will be many lasting rewards such as all of your stored items and materials will be available to your other characters, and any upgrades you do to the town will remain.

I'm going to be a junior this year in college and this is my biggest project yet. I am hoping to get a kickstarter and greenlight up and running before the end of the summer. Magicite is going to be a huge game with awesome pixel art! Keep an eye on this project if you are interested and you'll be notified right away when I announced the kickstarter campaign as well as greenlight. 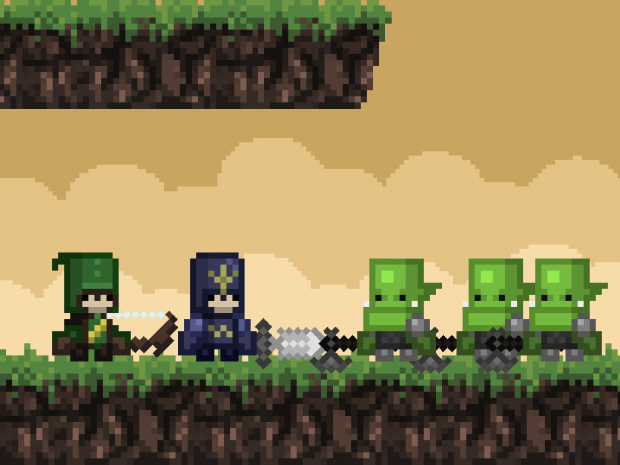 The focus of Magicite is randomization, customization, and crafting. But don't forget about epic quests that you can embark on with friends to slay insanely difficult bosses! This will be the best way to gain rare but crucial items in crafting the best gear and weapons. Also, to promote multiplayer, permadeath only occurs when the entire party has been defeated. So if you and 4 other friends are battling a giant dragon for it's rare drops and your friends all die, it is up to you to deliver the final blow or to run back through the level to the safety of the town. This unique game mechanic will provide very tense battles where players can feel true fear for their characters, and winning is that much sweeter.

Tracking, when do you think this will be finished? :D

Hopefully in 3 to 4 months. I'll try to get a kickstarter and greenlight up really soon

Thanks for the kind words. I'll post here when I get the kickstarter and greenlight up!

I must say I really love your art style!
I'm on a very similar project - Indiedb.com
feel free to contact me if there's anything I can do to help :)