Check out the current progress on the light system! Also, some new enemies have been added to the main bulk of enemies already in place.

First, check out Sewer Tea's poster (it was about time...): 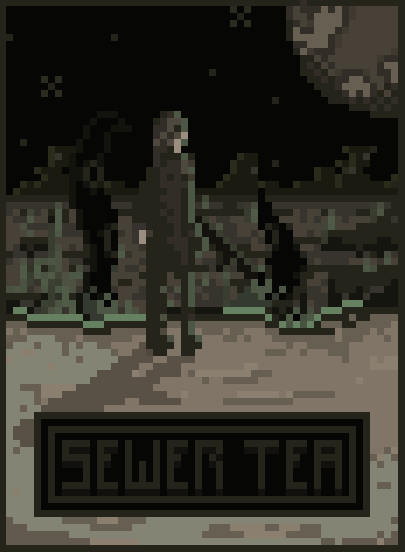 The last couple of weeks I've been focusing mainly on polishing the light system in order to address some performance issues derived from it. Now it's working more or less smooth, but it still needs some minor tweaking (reduce the size of the "darkness particles" and add some fading effect).

Other than that, I've been also working on:

Now the player can jump. Depending on which character build you chose at the beginning of the game you'll jump more or less (character build also determines character's defense and speed). You can shoot while in mid-air but right now there's no jump animation. Player revision is one of the things I'll be working on for the next update, so probably then I will add some jump animation and some other updates to the player.

The Crocophant will be one of those epic enemies that will relentlessly chase you until it accomplishes its mission (have your head decorate its living room, if crocophants had any, of course). Despite its name, a crocophant is not a mix between a crocodile and an elephant, but simply a really big biped croco-like creature.

We also have another addition to Sewer Tea's list of creatures. The Reka won't be a tough enemy per se, however it spawns hands that can fall on you, and if they do, they teleport you to the beginning of the maze (think Legend Of Zelda's great wallmasters). I have yet to finish all of its sprites and animations since I only have the Idle cycle shown below.

As per the level randomization tweaking, I've just modified it so that now there are randomized objectives every time you play. The main objective of the first level (the Hotel) is to find the lift door to the sewers. However, the lift could be damaged and you'd have to find first the tools to repair it or maybe you need three keycards to open the lift door. I guess you know what I'm talking about :)

As those of you who follow my twitter may know, I'll be uploading a gameplay trailer with all of the new features for you to see and enjoy.

Don't hesitate to join us on Steam and track Sewer Tea on IndieDB.

Great work as always, this game is going to be nice!

Thank you for the kind words :) It's really encouraging!