So at last, 4.210 is released! ...actually it was released two days but I haven't had time to post an update here until now, sorry for the delay but better late than never I suppose! :)

The most important new features of 4.210 are the three new mysteries to solve, two new missions to complete and a new boss to fight. Apart from that a whole bunch of bug fixes and glitches has been fixed, artwork improved and smaller extra content added. The player may now choose more freely in the game settings what visual quality and image effects should be enabled.

Since the release a few glitches have been detected but they will be fixed before the weekend, along with a new weapon and projectile type namely, the flamethrower!

As for the next major update (4.22x) I'm going to introduce a new module of the gore-system that I call Gorefrag (... yes, that's probably the most corny name ever but it'll have to do for now) It's not anything sensational really, but it will allow the player to execute enemies in more stylish and/or brutal ways that will also reward the player with greater energy claim per gorefrag-kill (...when corniness became cornier!) I've set up a prototype that I'm working with as we speak, but the module won't be finished or deployed along with the fix that will be released later this week.

The LBKR game clients can be downloaded from my here but will also be available from the "Downloads" page here on LBKR soon! If you have the 4.200 version on your computer, simply remove it and unzip (or install) the 4.210 version. No dataloss will occur since LBKR saves your character profiles in another directory than the game folder.

Full release log can read below along with known issues. 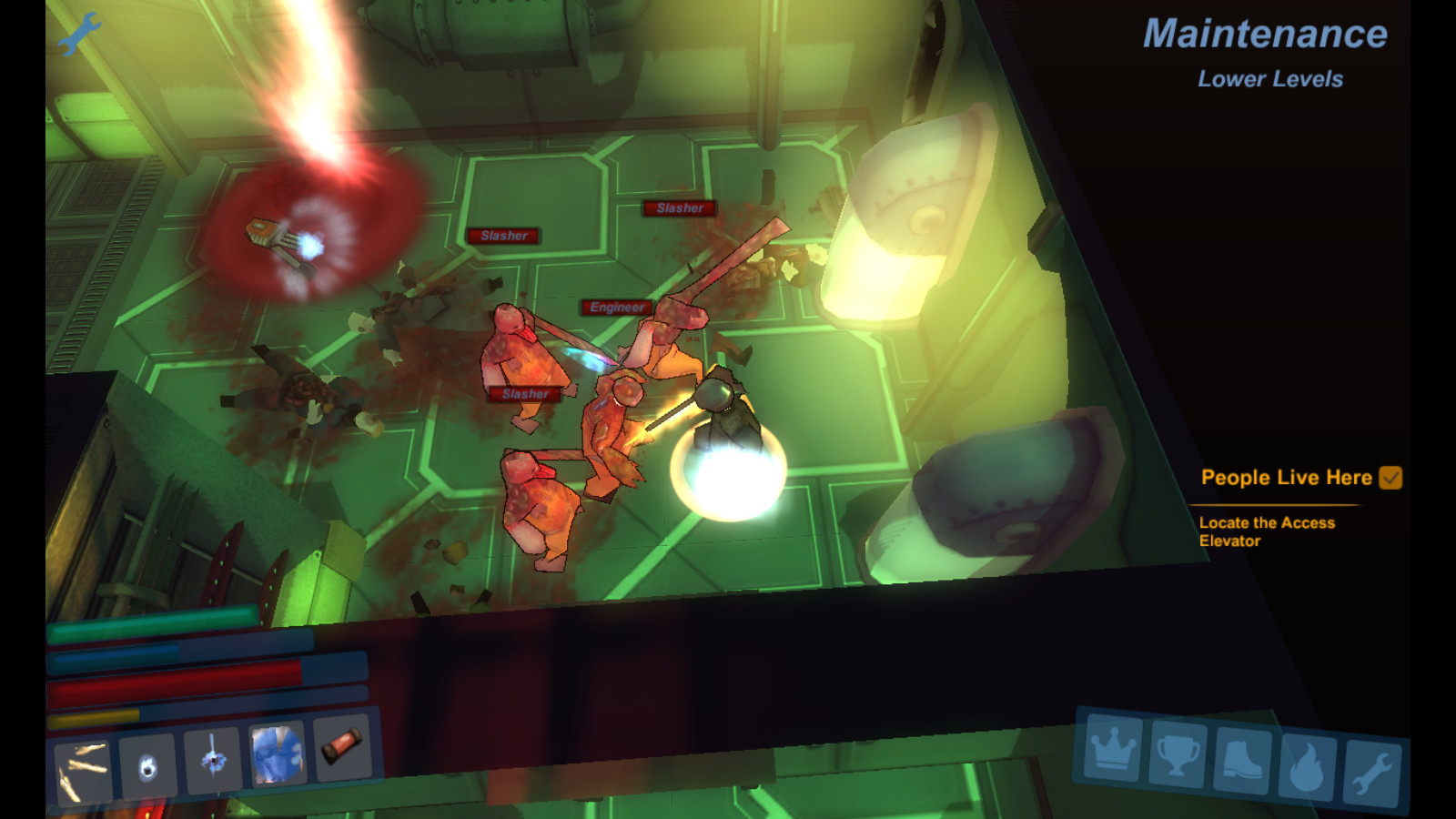 AI: Corpse objects are unable to locate all damage model datablocks ( Fix in 4.211 )

Game Logic: If the player dies inside the Gardener's Garden in the Oxygen Processing chapter, there's no way to get back inside the garden without reloading the chapter. (Fix in 4.211)

Game Logic: The oxygen levels decrease at rediculous speed in the Gardener's Garden, rendering the arena near impossible atleast on Moderate difficulty settings. (Fix in 4.211)

- Fixed issue with AI agents triggering platform trackers for the player character so that the player would start following any platform that the AI were using
- The AI's default attacks are now serialized instead of generated at runtime, leaving more control to give different monsters different attack behaviour, despite the attack beeing of the same type
- Fixed issue with the AI power beam attack continuing even though the AI casting it has died.
- New boss added, called "The Commander"

- Mysteries that are under investigation by the player are now stored in the player's log book.
- Added a tutorial hint regarding weapon quick swapping
- Added tutorial hint regarding camera input
- Added tutorial hint regarding carried game objects
- New exquisite-classed items has been added, they are much like bounty gear, more powerful then the ordinary items found in loot or shops, but can only be aquired through challenges or achievments
- Item Modifiers of items with higher rarity ranking now require materials of equal rarity ranking as the item the modifier belong to
- Oxygen is now drained alot faster in the Gardener boss arena of Oxygen Processing
Audio

- Mission Window: When opened the last tracked quest will no longer be viewed if the mission has been completed and closed
- Inventory: Fixed issue with material cost text bleeding into item modifier tooltip text
- Inventory: Increased gear preview camera near-clipping distance to prevent some gear from not rendering in the preview panel

- Achievments: Abilities are no longer rewarded for completing achievments
- Journal: A log collectible found in the void level "Forsaken Peak" was repaired, the target log could not be found in the database due to identifier error
- Linux:Prepared databases and file management code for linux build
- Settings: Collected mysteries are now properly loaded on startup and added to the player's mystery tracking list
- Settings: Fixed issue with the game not saving progress of the selected difficulty mode when the player completes the story
- Game Logics: Fixed a bug that made it possible to gain negative energy vital values
- Game Logics: Fixed a bug that allowed the player to regenerate health and energy even when dead
- Game Logics: Achievments database is now properly validated when the game has been updated with the latest build
- Settings: Fixed issue with some graphic-related game settings not saving the toggled state when the settings are changed.