We're showing off the potential creatures we have in store, including a full breakdown of the teams efforts this week.

With steely determination we’re one week closer to releasing some big changes to the game. Our focus has been on asset generation for the updated weapon system, new creature types to populate the larger world, and a survival/XP system.

Among these big upcoming changes we’re looking into fixes for current issues. For those who are eager to explore the new world, you’ll most likely not be getting deployed on the smaller island for much longer!

Here is what we’ve all been up to this week:

I have transcended to a plane of production that only few have experienced. Organisation of the highest magnitude, a perfect balance. Yin and Yang in harmony. Roughly translated, I'm keeping the game on schedule by kicking ass.

A lot of baking has been done, and more to go. Not the tasty kind of baking either. Infact if I was actually baking I’m pretty sure there would be more cake than actual art done. Unless you consider cakes art. Texture baking can look tasty though, especially when adding more detail to weapons, which is what I’ve been focusing on all of this week.

I’ve been going through the creatures with the rest of the guys in between the weapon modelling as well. This is mainly to make sure they are varied enough and hit the mark for the quality we’re capable of.

These last 2 weeks I have been working hard investigating the performance of physics on our server and coming up with possible improvements along the way. We have implemented some of those but others need further investigation as to how best to approach them. The UDN and NVidia have been especially helpful with all of this so we can’t thank them enough.

I am now back from my holidays and working on designs in full swing. Early in the week, Ricky, Andy and I have finished the first pass on the Unlock screen, which is an integral part of the experience and progression system and will massively help us with the tutorialisation of the game in the future. Have a sneak peak, but please remember that it’s in a very early stage of development.

Additionally to the progression system, I am having a good hard look at our creatures. We have been discussing internally the direction we want to take them, because in the current state of the game, we feel that our enemies are trying to do too many things all at once, that they end up not doing anything specific particularly well. So far we have been unable to “read” the environment of your base precisely enough to be able to tailor the enemy attack for it.

That means we were forced to just “throw a bunch of creatures at it hope for the best”, in a manner of speaking. We have already taken steps to improve that, and next we are planning to give each of our creatures a specific purpose and the tools to fulfill it during the attack. This will by extension give each of them an identity, making the turret defence part of the game a much more interesting experience.

Lots of different things this week. I’ve completed an initial design of our food/consumable types we’ll be implementing sooner than later. The survival HUD has been fleshed out into concept form also.

My main focus for the last few days has been producing proxy creatures with Tom, which has been incredibly productive and gives us a great Idea of what the Biomes will look like populated with the variety of Fauna we’re aiming for.

We’re finally moving to Unreal Engine version 4.10. I’ve been dealing with all the compiler errors and crashes that result from the upgrade. We’ll finally have Hot Reloading back and the Editor takes a fraction of what it did to load, we’ll be working with two hands again.

These past few weeks I've been making more tweaks to the modular weapon animations. As you may have seen in our feature last week, this can be a lengthy process particularly as we have different rigs and setups for the first person (the hands you see in the world that move with your camera) and the third person characters (the bodies you see on other players).

There will still be some work after I get the final weapon meshes from Matt but while I wait I've been helping with the creation of proxy meshes for the creatures. These are simple meshes that help us gauge the scale and feel of a creature in relation to the player and other creatures before working on it further.

It was my great pleasure to model up the Giant Swamp Tarantula that Joe didn't want to make and Lee doesn't want to program. Am I the only one that thinks it's pretty cool?!

I have briefly vacated to a festival, fleeing my natural indoor habitat with a clear and overwhelming urge to experience the outdoors with my new friends, Fernando and Dapper Melon. 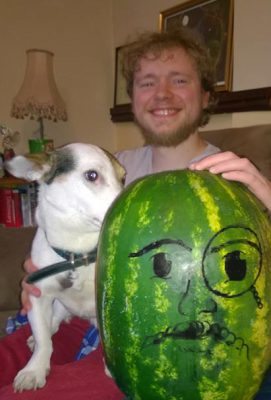 Creatures!!! All the creatures, we have creatures coming out our ears! We have big ones, we have small ones, we have flying, we have running, we got it all! ...So, we have been working through the list of creatures that need to be conceptualised and creating orthographics for these once the designs have been completed.

My week has been spent testing the next Exp system, which really means I’ve been trying to level up enough to test the Exp system. Then to my surprise (by “surprise” I mean frustration) I was informed that before Ricky went on holiday he added a command for gaining Exp meaning I didn’t have to naturally level up...Thanks Rick. Other than that I’ve been looking at the work Lee and Marcin have been doing with the new AI and their collisions. Few minor issues, but in my opinion it’s feeling much better already.

That spider is already making me very uncomfortable.