A short update on the currently progression of the mod. The first of the year!

I got awful busy and thus pretty quiet during the holidays, but now that's all over and normal work on the mod has continued.

The coding had been coming along well: the troop-trees have been finalised and are all good to go. The way a player joins an army has been redone, as well. You no long need to have a certain amount of renown to enlist and the certainly don't do so by talking to the faction leaders (going to Napoleon to enlist would be a bit ridiculous, now wouldn't it?) anymore---recruiters can now be found in capital cities.

Work on the uniforms featured in the mod is going quite well, too. The list of uniforms that need to be made is getting mighty short. May as well show a new one here as proof.

Here are the Garde-Chevaulegers of the Grand Duchy of Hesse-Darmstadt, a constituent state in the Confederation of the Rhine. In the mod, these troops represent the Confederation's main light cavalry. 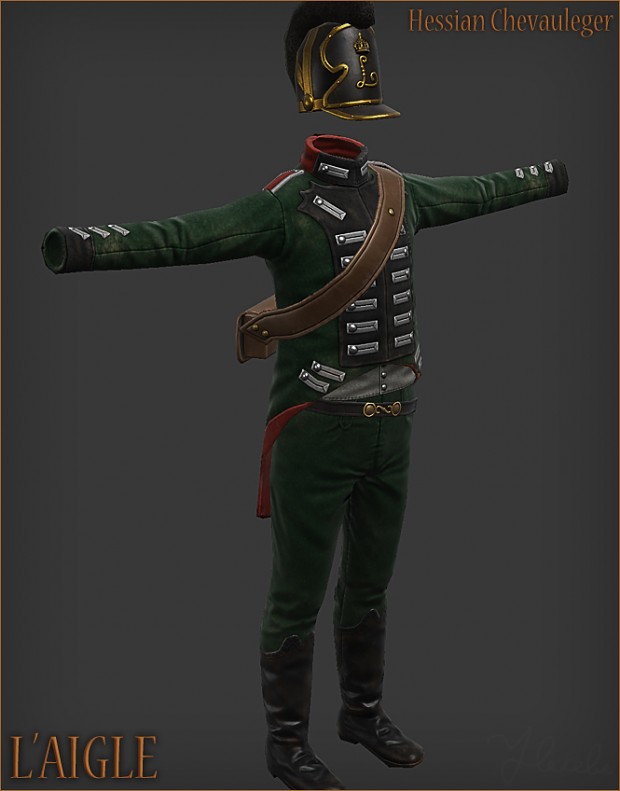 Thanks for reading. That's all for today.

You guys deserve an official seal of awesomeness. Your every update is breathtaking, it's like it's not M&B engine anymore, just amazing!!!

The horrid graphics in the original game can be explained with bad artistic direction and reuse of old visual assets, more than tech or anything else.

Looks so damn amazing, you can see the dedication in every new update!

Amazing just beautiful you guys seem to be putting your heart and soul into this.

i have a big feeling when this mod comes out it will be the top mod on the moddb! great work kind sir you make fantastic art. and i agree walking up to the emperor and asking to join the ranks would seem a little unorthadox hehehe

Amazing so far, really cant wait for this mod to be released, gunna spend hours playing it

I would actually pay without any hesitation if you guys did a commercial release. Every update you guys upload are impressive to say the least.

will you be able to fight with only the same unit or will it be like regular mount and blade with like 20 different units?

You can fight with only one unit in regular M&B, just don't recruit anything but that unit.

In the mod you can choose between Line Infantry, Light Infantry, Heavy Cavalry and Light Cavalry when recruiting troops, so you'll always be able to get what you want.

Any clue as to a release date, i mean take ur time im just curious

Not expecting a reply, but if we donate could we perhaps get it a little early? i mean as it looks so damn cool!

I can't offer early access for donators. That would cause a number of legal complications as it would be too close to selling the mod.