Full inventory plans, new enemies and items such as lights and alternate storage are at the forefront this month.

We hope you have all enjoyed the holidays. It’s been great fun playing with some of you guys during our brief break. We’ve been back at Flix HQ this week working on some fresh new features as well as fixes for the performance bugs that have been reported since the last update.

Thank you so much for all the feedback you’ve been sharing, you’ve been a great help in finding and debugging some of the issues. As for what's next, we'll be looking to push another update to the build out in the next week.

Here’s what the team have been working on for future releases:

The new year 2016 started for me with major optimisation work for the server by shedding off all decision-making processes from animations, which allowed me to completely turn them off. This means we can use the saved frame time on improving physics or at the very least start seeing some performance boosts.

Additionally, I’ve been looking into progression system designs and buildable lights. The latter are a challenge because we need to be very careful about what we allow the players to do and how. If we are too lenient with the lighting rules we might end up with terrible framerates while in heavily lit bases and that would mean bad time for everyone.

Thankfully if we’re clever about it, the Unreal Engine allows for some pretty efficient solutions, so it’s looking pretty good. Here’s some work in progress for you to enjoy:

I’ve been looking at the amount of AI in the world and trying to limit the numbers this week to try and improve performance. Hopefully the waves of AI which attack your base at night will be more manageable. I’ve also been looking at any optimisation improvements I can make to try and take some of the load off the server.

This week I have been profiling the server and working with the team on implementing optimisations so things should be running quite a bit smoother on the server. I have also been looking into being able to play from the same PC that is hosting the dedicated server so for all who asked it has now been added to the server setup guide :) You will need a high end processor and more ram to do this so please be aware of that.

This week my main task was to focus on stress and performance testing of the new map in multiplayer while also conducting a second pass of Onyx rock placement specifically for mantling around the world.

This week I’ve been working with Joe on redesigning the inventory so that it’s ready for all aspects of trading, crafting, looting, upgrading, Colony management and more in order for it to be solid for future updates. You’ll be happy to hear that we are scrapping the old crafting UI and are instead making it far clearer as to what the benefits of building out of different material types can do for you as a player. In addition to this we will be renaming the resources in Eden Star to fit with more familiar real-world references, such as wood, rubber, metals (Titanium etc.) rocks and so on…

The image below shows a concept of the new system that allows player to see their inventory at all times in the center left block. The center right block is dynamic, showing contents when interacting with storage or craftable schematics when interacting with a utility etc. Items will also take time to craft (not depicted within the image), allowing item crafting to be stacked.

So, please let us know if you think we have missed anything here or if you have any suggested changes for us! 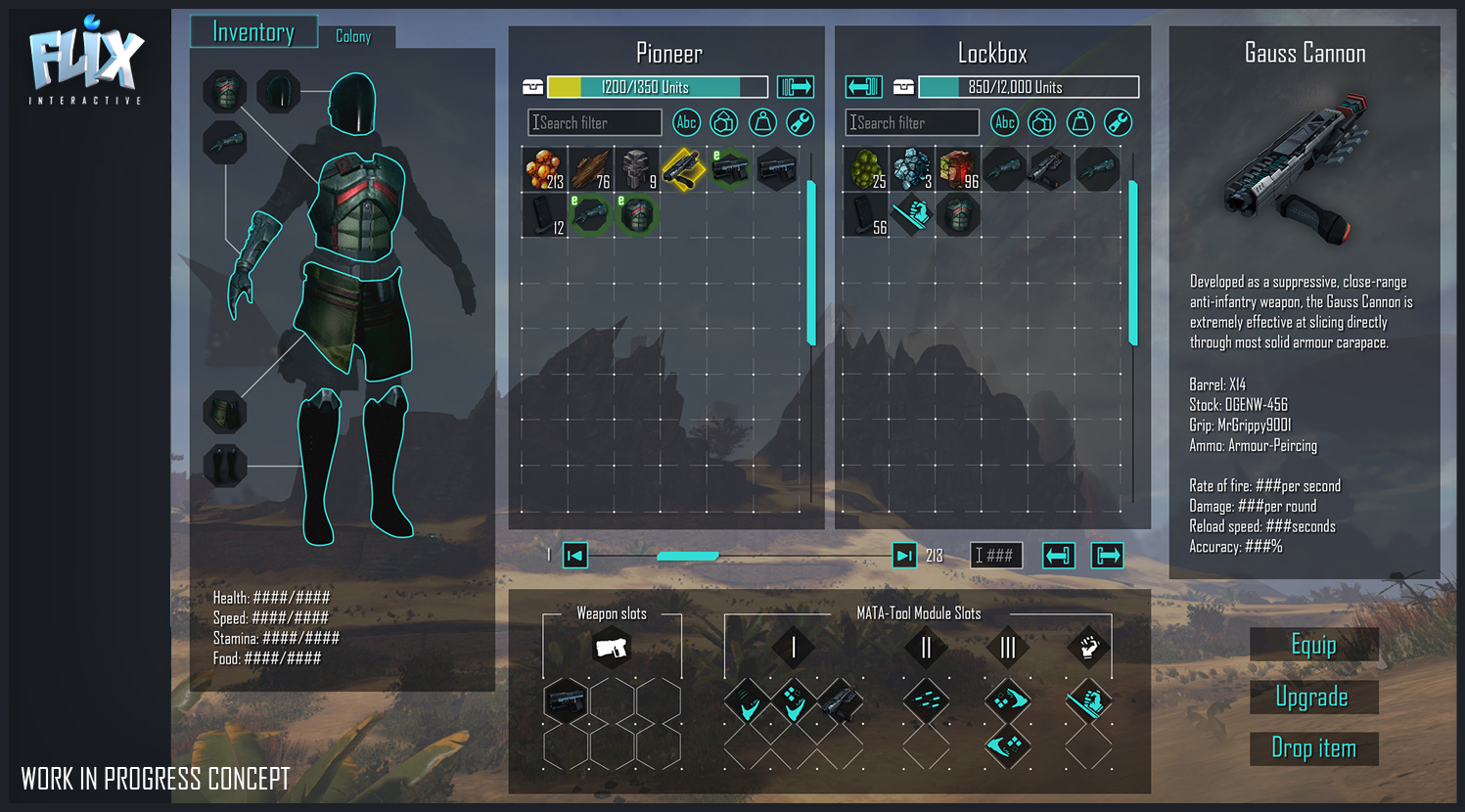 Yves isn’t here today but if he was here I imagine he would have said something like this. This week I have been working on optimising some of the structural integrity logic on the server, implemented a patch to the physics engine so hopefully physics simulations should run a good deal better now and worked on adding some RCON commands for clan history so we can more easily debug some of the clan related issues where player were getting shot by their own turrets. Enjoy.

New year, new UI! This week I’ve mainly been creating initial designs, layouts and concepts for some new menu screens, specifically the inventory/equipment/crafting menu which will need a big overhaul for our new inventory system. I’ve also created some models for a placeable stand complete with placeable lights and display. Nothing concrete to show yet but rest assured we’re going to make your bases much more homely!

Happy new year all! So, a lot of new utilities and and weapons are my primary focus this month. I’ve been working on assets for a ‘lock box’ for storing and sharing items within your Colony. Also there will be the addition of a spawn pad which will effectively act as your set spawn location throughout the game (As long as it doesn’t get destroyed by creatures or other Pioneers :p )

After the break I dived straight back into the armour sets! Currently detailing and polishing the high res version of the Cybermancer set.

Implementing a first stage of a shiny in-game map displaying the location of all you and your allied bases and comrades. In addition you can see your Colony members on the Compass now too and I fixed the bugs with the Compass markers not always updating correctly. It has been cleansed of 99.9% of known evil bugs for the time being.

This week I have been cleaning up weapon animations and set up in preparation for our future modular weapon system. I’ve also begun rigging the Splintermite Queen ready for animation and helping out with testing the latest fixes.

Happy new year everyone! This week I have been working on designs for a placeable stand, light and screen, which players will be able to place in their bases. Designs for another utility - the refinery - have been started.

Performance testing this week. A lot of high latency issues have required my attention, and getting the game running as smoothly as possible in the interim is my priority. I’ve also been testing performance in the new map, amazing is one word for it, but it will need some serious performance TLC before it will be unleashed to everyone.

See you in the fray!
-Team Flix