It’s been about six months in the dark, and I think its time I showed people. I’m making a game about exploration for exploration’s sake.

It’s been about six months in the dark, and I think its time I showed people. I’m making a game about exploration for exploration’s sake.

In most open-world RPGs indeed you explore, but it doesn’t quite feel like you’ve found anything unless there are things to kill there. The rewards received are almost invariably items with which to kill more effectively. Even side professions often yield rewards that aid you in killing one way or another. 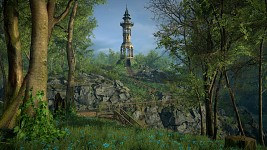 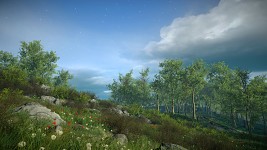 To put it technically, I’d like to attempt to make a game where the core reward loop is exploring itself. Exploring rewards you with things to help you explore more. As the combat in other RPGs can be a worthy experience itself, rewarded or otherwise, traversing the environment will be the worthy experience in Eastshade.

I have some ideas about how I might make a world interesting without combat, but I’d be delusional if I held any certainty about it all working the way I plan. There are likely going to be changes along the way, and what I end with may not be what I initially set out to make (I’ll be elated if I can manage to end with something at all).

An open-world game just for the sake of exploring...

I. Am. Soooo tracking this!

This is a really neat idea. Most games, as you said, incentivizes exploring by rewarding them with goodies, which sort of removes the "explore for fun" element.

I think that if you want to make a game like this, it'd be a good idea to make a story that's basically told only through the environment (basically no dialouge or in-game text). In order to find out what's going on, the player will have to explore different areas.

If you do it this way, I think you'll also have give a few pointers to make sure that the player doesn't get lost or looses motivation to go on. For an example, you could have a shipwreck that has an old flag on it. If you then look around you, you'll see a tower in the distance (like the one shown in one of the the pictures) that flies a similar flag. This will basically tell the player that the shipwreck and that tower is connected, and that he/she will find out more by going there.

It would be awesome if there were some purely mechanical elements that incentivized exploring, but I can't come up with anything that doesn't make the game more about exploring for reward rather than exploring for fun. If you can solve that nut, I think this game will be fantastic.

For sure! I'm definitely going to try to embed interesting stories into the environments.

This looks stunning and beautiful. Being a fan of Dear Esther, this seems right up my alley. If you haven't played it, it may give you some inspiration on how to reward just exploration.

Heck yeah! I've played through Dear Esther quite a few times. It's been an inspiring and important game (or whatever one prefers) for me.

How about making it a mushroom picking simulation? I know you don't want to make it a game about rewards, but it could be one about learning. You could have a hut and a stove and go out to find randomly generated mushrooms (random as far as placement allows - they can't just grow on stones or near water).

Brush back some leaves and find mushrooms below! Check them with your guide to see if they are edible. Cut them at the stem and put in basket.

When the basket is full, return to your hut and cook/fry them. If you chose the wrong mushrooms you will experience all sorts of illness and even hallucination. If you chose correctly you get rewarded for the selection you made, rarity of mushrooms and quantity of each kind.

I actually thought about this as a hoax at first, but I go mushroom picking with friends sometimes and it is the most relaxing thing. You get all kinds of nice surprises like deer jumping away all of a sudden or other collectors that are just out for a chat.

And from a game like this - if well done, you'd learn a lot about mushrooms, maybe even about nature in general :)

Most people nowadays use 'open world' as an excuse to slack off on the game core storyline and mechanics. 'So, what do you do in the game?', 'Well, it's open world, dunno, chop some trees'. I'm so sick of game developers slapping off an ugly voxel world and saying 'There you go. That's the game, but you have to craft your own adventure'.
I see your game a bit different. You have a motive. Your game is a journey. Your players will be traveling in a surreal world of unknown proportion and poetic beauty, where nothing is confirmed to be impossible, but is left in a state of fantastic credibility.
I'm bought in.