In our most transparent post yet, we discuss some problems with the early gameplay from a game design viewpoint. 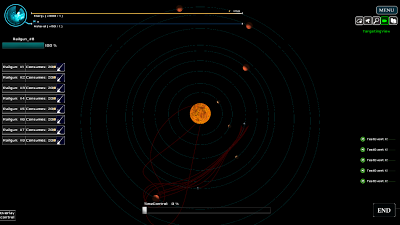 One of these must hit!

Hello. I'm Sasu and I like to write blogs.

Everyone's been very busy lately. We're working hard to get everything essential working without a hitch, but hitches keep coming along. Well, that's the reality of game development and there's not much you can do about that. Except maybe try to design things in a more detailed way.

So, today, let's try something a bit different. Instead of me just telling you about a game mechanic, I'll explain some problems we've come across in testing and some solutions we've formed up.

The Difficulty of Hitting Your Enemy

Well, I guess one did.

While testing Interplanetary, we've repeatedly come across a tiny problem with the Targeting System: it's darn difficult to hit your opponent! There are many things that play a part in this.

The planetary system is alive. Once you've set the trajectory and fired your cannon, time unfreezes and the planets start orbiting. It can be very difficult to foresee the movements of this slightly chaotic system. The biggest problem here is that the planets have a large influence on their surroundings, thanks to their...

Strong gravitational fields. Now, this is something that's almost impossible to predict for a mere human. Sure, you can account for a planet moving in front of your firing line, but can you calculate how exactly it affects your firing trajectory with its gravitational pull? We can't.

The planets are quite tiny. Small things are more difficult to hit than big things. Who knew?

When shooting a single railgun slug at your enemy planet, the odds of hitting it are very small, even if it happens to be right next to you. Building 15 railguns and firing them all makes it a bit easier, but managing to maintain such an artillery would be very difficult and time consuming in the final game, not to mention the bother of targeting each and every one of them every time. Something needs to change, but what?

We Have Some Ideas


A planetary prediction system would make it much easier see the future positions of planets. We have plans for a system that shows the player the "shadows" of the planets' upcoming positions, depending on the current trajectory drawn. The future trajectory of the railgun slug, affected by the position of the planets, would also be shown as a shadow. 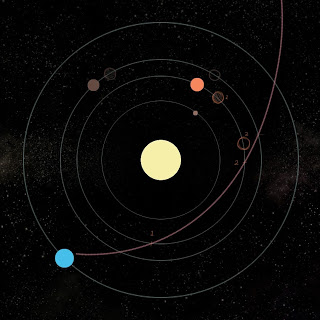 Looks a bit complicated on paper.

The obvious problem with this solution would be that it takes away the element of predicting planet positions and may make the game way too easy to play. Of course, there would be extensive balancing done to accommodate for this feature.

Lowering the effect of gravitation would be an easier way to tackle the problem, but doing so would also make the game less interesting. In the earlier builds, you only really needed to worry about the gravity of the sun. Other planets' pull was much weaker, so it was possible to actually pull off very accurate attacks. This did take away some of the fun, since crazy, unexpected trajectories didn't happen.

We could just make the planets bigger. This might be the easiest solution and the least problematic for now. The biggest foreseeable problem with it is the change to the visual style. We're trying to keep a "realistic" feel to the game and to sort of keep it grounded. Bigger planets might give the planetary system a caricatured feel. Or, maybe we should give the planetary system more of a "war room"-feel. It doesn't look particularly realistic as it is, so maybe adding more elements to make it look more like a tactical representation of the real thing, would be a good idea.

Now, we simply pick one idea, implement it and test. Or maybe we should use them all? Or something completely different? What do you think?

You could have the planets general area of major gravitational pull be shown when you are choosing your shots as well as a repeating representation of the planets movement over a very short time to show the general speed rather than where it will be. The general representation should also be given to the projectile. For now you could probably release an alpha version containing just the firing mechanism to see how others manage.

Good points. There's already a feature where the player is able to control a slider to simulate time and see the planets' movement, but the speed can be difficult to gauge, that's true. Just need to be careful not to make the targeting view look too confusing with all that data.

Oh, how I wish we could release the alpha for testing already, but it's not quite ready yet, unfortunately. We do have an early prototype with a very nice feeling firing mechanism. Might pass it around as a kind of a demo at some point.

The firing mechanism would honestly be all that is necessary to test ideas for the firing mechanism. As for the slider, it would probably need to also show the speed of the projectile in relation to the planets if it does not already do so. Cant wait to test this out to tell you the truth.

My physicist brain gets very excited by games like this. Any sort of interplanetary kinetic delivery system would have tremendous mathematical challenges, mostly presented by the time of year and just getting off the ground with enough force to reach escape velocity but not destroy the launcher. That's a mind blowing amount of energy to lift a kinetic vehicle onto its trajectory from a planet surface, especially if the mass is enough to do any good on entry to the target's atmosphere and make contact with the surface.

Those are exactly the same kind of things that motivated me to start making a game like Interplanetary. I would like to pay attention to details as much as possible and offer reasonable explanations to why things work like they work in the game. Of course we need to make some sacrifices here and there to make the gameplay enjoyable, but I still want to keep the game as "feet on the ground" as possible.

To your last point: You say that you could make the planets bigger but don't want to change the visual style. Why not try this:
- The planet's size remains the same, but the projectiles become "smart". Each projectile has a small radius around it, and if there's a planet close enough, it will fire an additional engine and move towards that planet.
This way you could hit planets without precisely hitting them. The whole thing could be explained by saying that the projectiles have a gravitational-pull-sensor in them, and when the gravitational pull gets large enough, the projectile moves towards that pull.
By displaying the radius you could make it quite plausible for players. And you can easily adjust that radius for different guns, or leave it away entirely for the really strong guns.

Actually, this is something that we've been talking about for some of the weapons. Great minds think alike, huh?