Posted by EleonGameStudios on Jan 20th, 2016

Many of you were wondering, what took us so long to release this patch. We are quite sure, the following feature updates are a great compensation for the waiting time: Targeting Options and overall Turret Improvements, Device Grouping and Blueprints in Survival!

Targeting Options can now be set for each turret individually. With Pre Alpha 5.2 we are going to add the first four options. Those can be activated or deactivated in the console ( default: P) via checkbox:

As a small hint: the “other factions” setting will be split up in a more detailed setting in the future, like alliances, neutral factions and such! 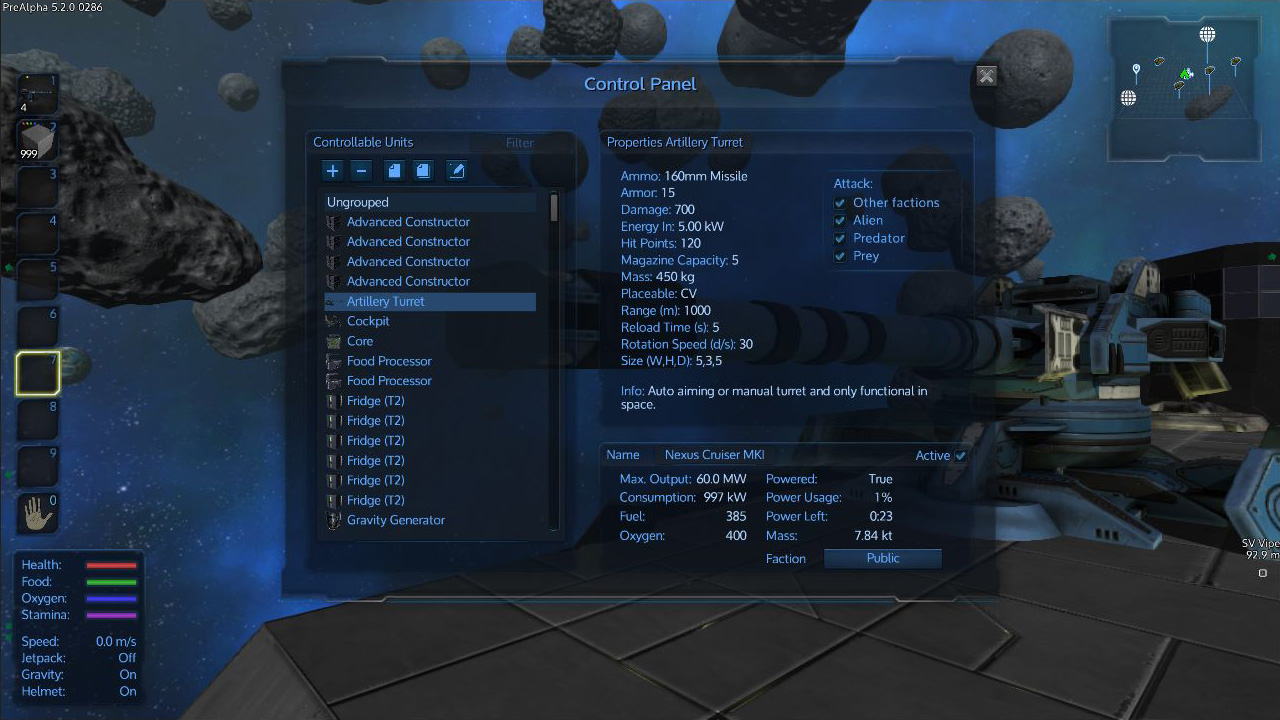 In addition, we have implemented several other turret improvements as documented below in the changelog.

Please note: Currently, you need to re-activate every turret after changing playfields. This will also be addressed in the upcoming patch!

If turning off your thrusters, while keeping the growing light and fridges active and all other lights off gave you headaches, Pre Alpha 5.2 has the cure! With this first feature release of Device Grouping, we are tipping everyone’s toe into the wonderful world of filling up your console with a slew of functional groups.

You can now create groups, add/remove devices, add devices to the last used group and switch the devices of this group off and on - given the devices you were grouping have an on/off switch!

This on/off switch, displayed as “ACTIVE” with a checkbox next to it, can be found on the top right corner of each of the group- or device-info windows: OFF = empty checkbox. ON = checkbox with a hook. If your groups devices have different on/off settings or devices missing an on/off option, the checkbox is showing a rectangle. Devices without an on/off state do not show an ACTIVE checkbox on their detail page at all.

Please note: if you create a new vehicle, all devices are listed in the “ungrouped” group by default. 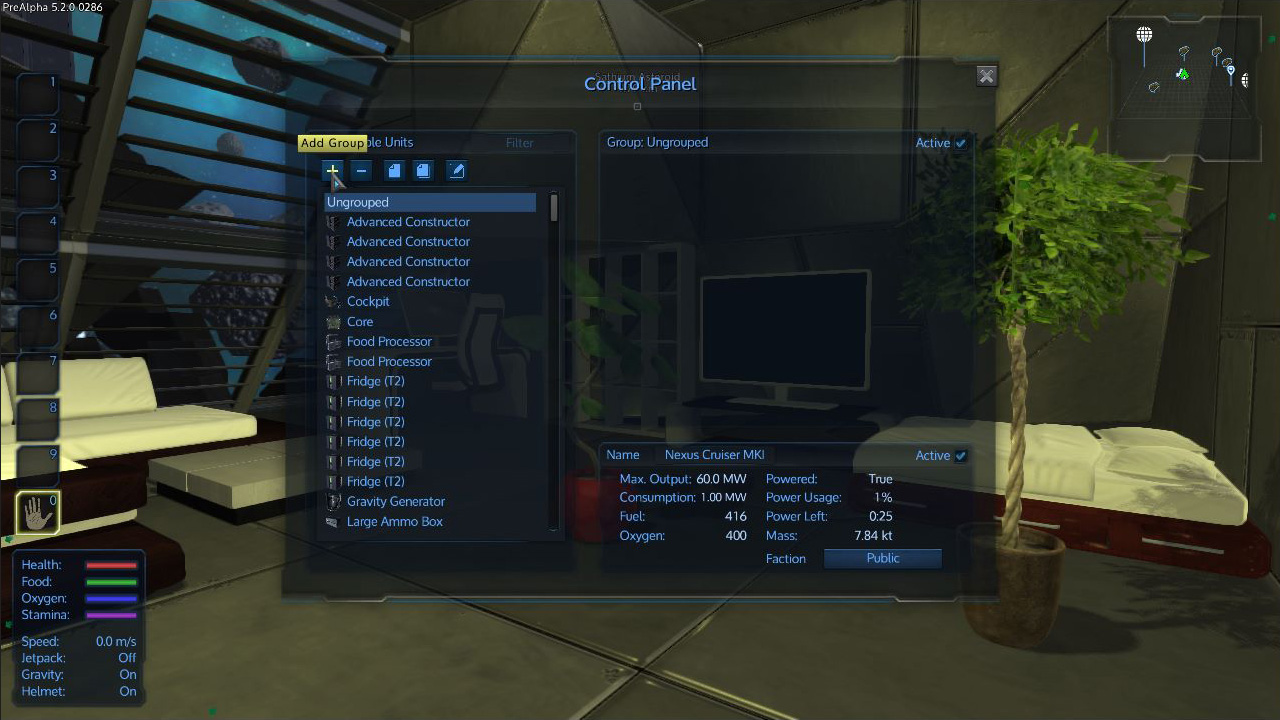 With the addition of Device Grouping, the overall power-management has also slightly changed, reflecting the grouping options in a more granular power-management method. Y (default) will, as always, activate or deactivate your vessel. It will stay the main energy switch: if you want to shut down your vessel completely, hit Y (default) and everything will power down.

But if you want to switch a vessel to active state, this now behaves a little bit different, depending on your group- or individual device settings:

Please note: if you add a new block or device to your vessel or base, its individual ACTIVE setting is ON by default!

Always wanted to get rid of all the running around, constructing components and blocks while remembering how you had set up your supercool base or vessel the first time? Never again! With the addition of the (very early) blueprint management, you just need to remember the name of you blueprint!

Please note that the current blueprint management in Pre Alpha 5.2 is something like a version 0.5 feature release. There are a few more steps to go until this is fully finished, but we did not want to wait any longer and decided to give you something to play around with - and to test. 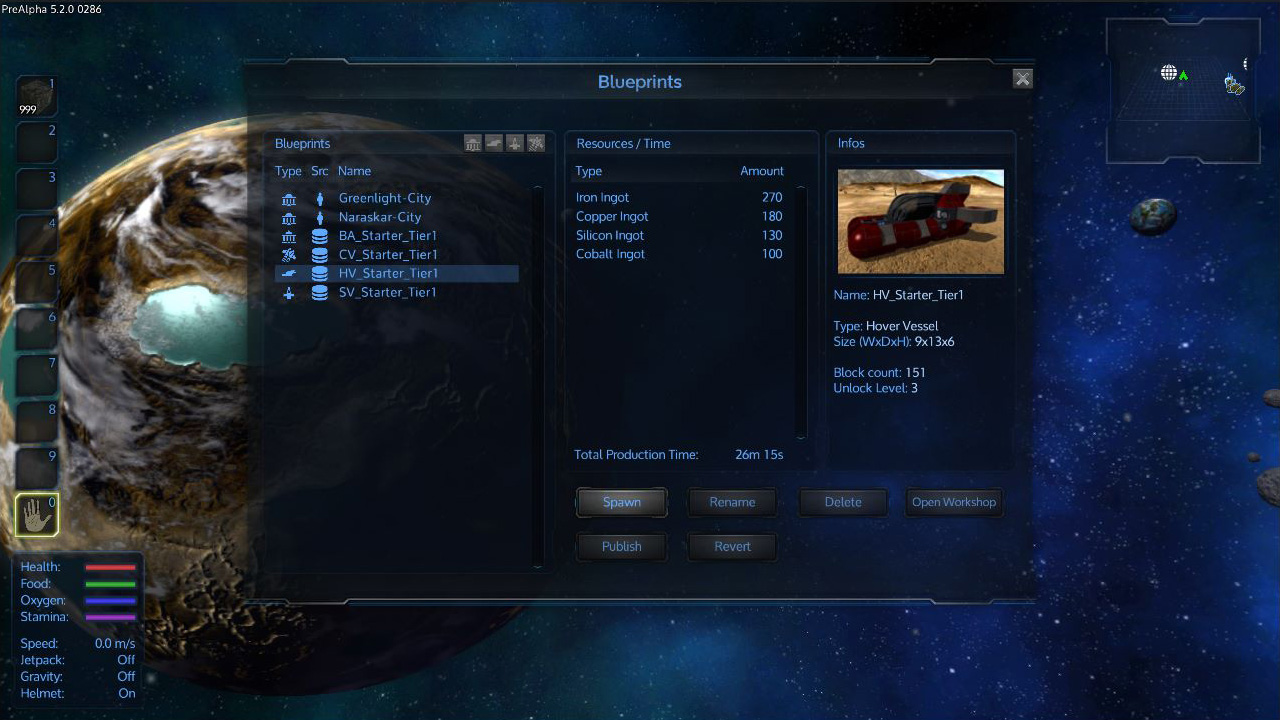 That’s possible with the blueprint management in v5.2:

Please note: resources added to the factory intake are stored for upcoming blueprint production. You can’t retrieve them from the factory (yet).

Please note: the addition of a production level is the way to go for NOW. This will change to a more granular requirement as soon as possible.

We also added some stock blueprints to the game. 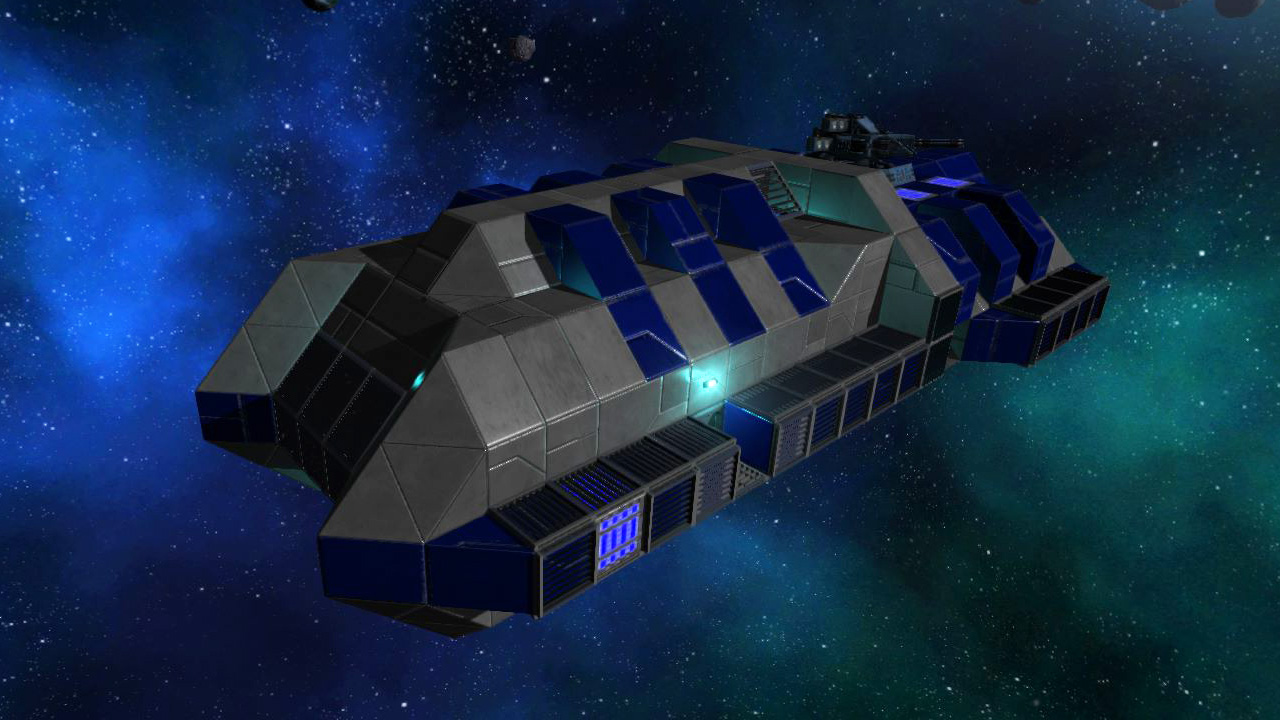 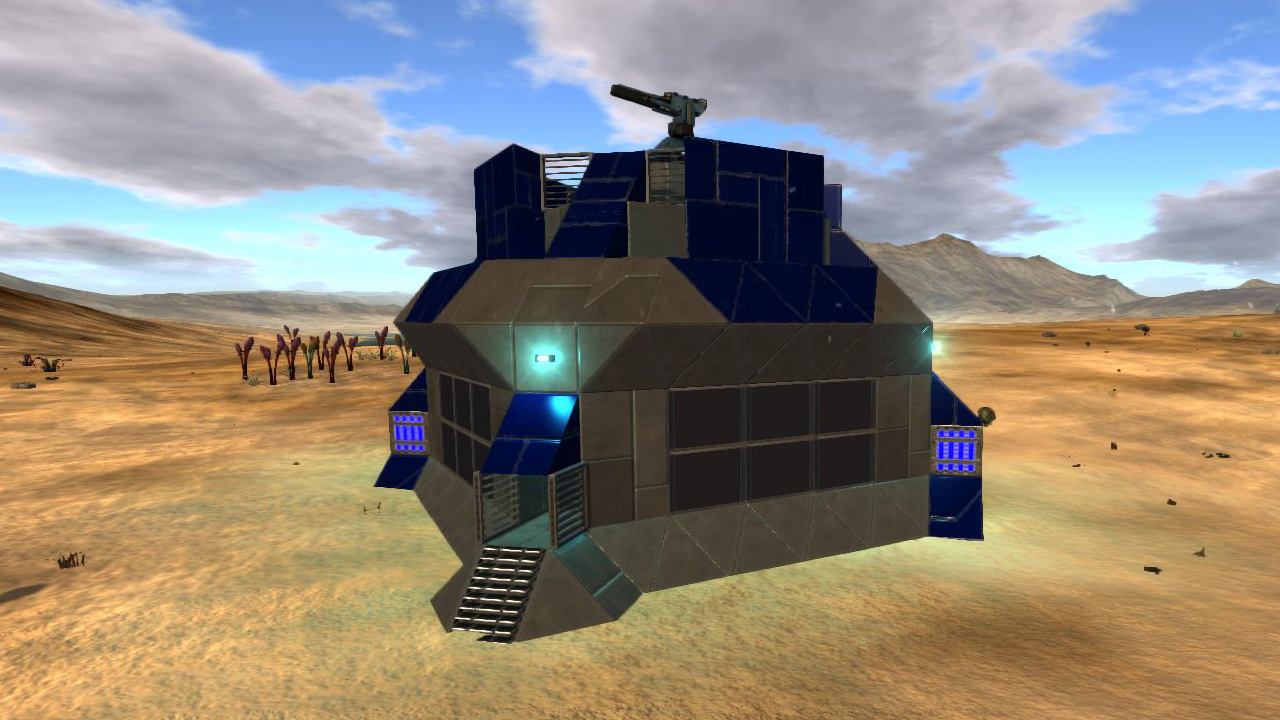 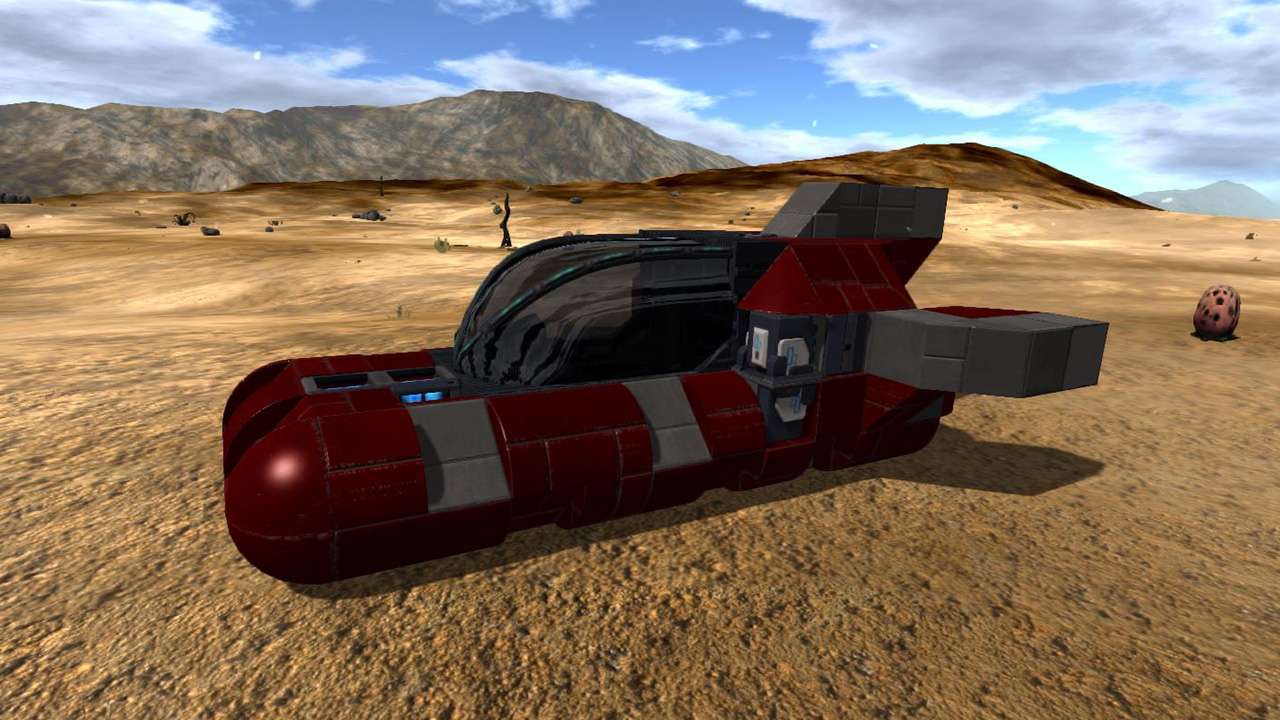 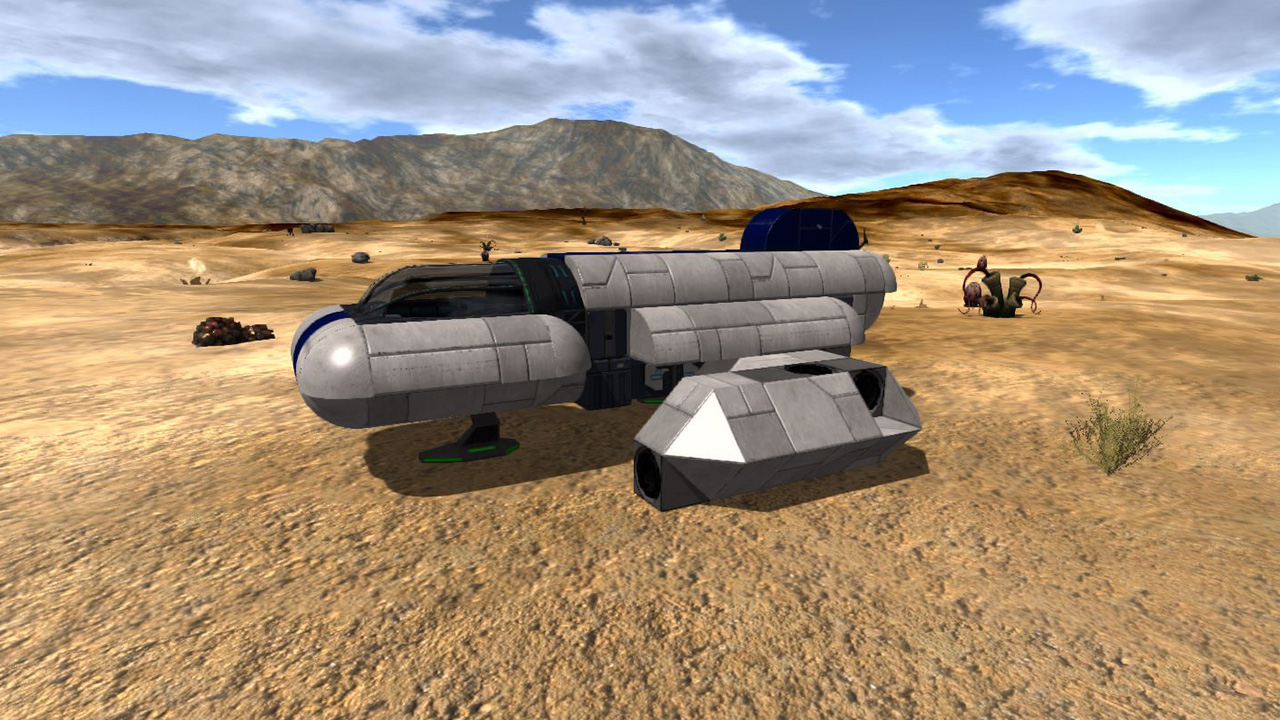 To point it out again: the blueprint management is a not-yet-finished-feature release. Some details will change, others might get added or refined, like a better blueprint-spawn preview for bases. Said that, we would like to grab your feedback on the question of blueprint production times in particular. Two possibilities for Singleplayer:

As always, please submit any bugs to our bug forums.

We hope you have great fun, playing around with those new additions!

Main Features:
1. Improved turret behavior
- Added possibility to select faction that a turret attacks (Other Factions, Prey, Predator, Alien)
- Better targeting for turrets: Turrets now pick up the closest target and don't get "distracted" with targets that are far away
- Attack range of turret is now dependent on type of turret (e.g. CV artillery turret can shoot up to 1000m)
- Increased attack range from 500m to 1000m for alien turrets in space
- Increased attack range of enemy turrets on planets (now they should have higher range than SV weapons)
- Enemy turrets stop shooting when player leaves their attack range (before enemy turrets started shooting on player SV at 300m but continued shooting until player SV was further away than 500m)
- Increased detection angle of turrets to 360°, i.e., now turrets can detect enemies in a full circle
- Increased vertical rotation limits of turrets and thus better targeting
- Improved manual turret handling (before you could manually "overturn" the turret, e.g. by moving mouse above the max vertical rotation limit. The result was that the turret go stuck for a while when you moved mouse back again)
- Increased overall rotation speed of turrets. In addition, rotation speed is now dependent on type of turret (e.g., fast moving minigun turret and slow moving artillery turret)
- Turrets now ignore dead targets

3. Device Grouping in Control Panel
- Added possibility to group items in the control panel
- In addition, now you can power on/off single devices and whole groups in the Control Panel (e.g. you can now group thrusters and turn them off separately) 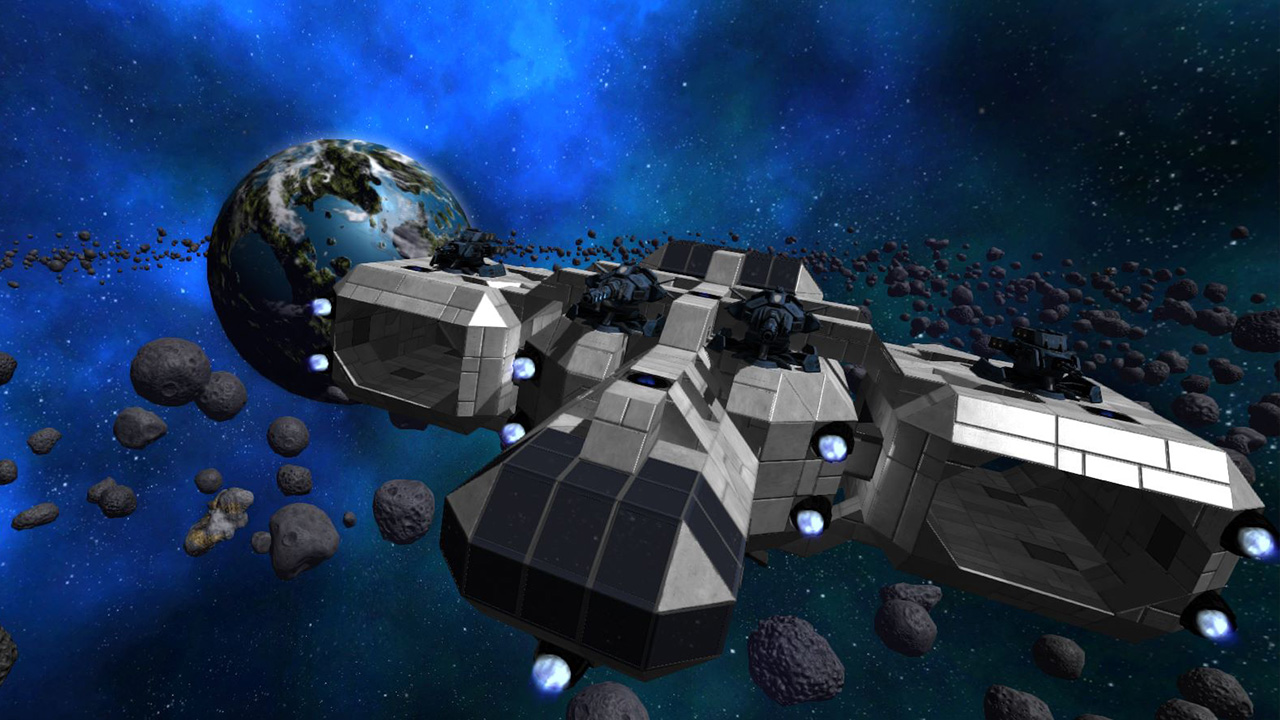 The engine room with its warp drive of the new Nexus (in Creative Mode): 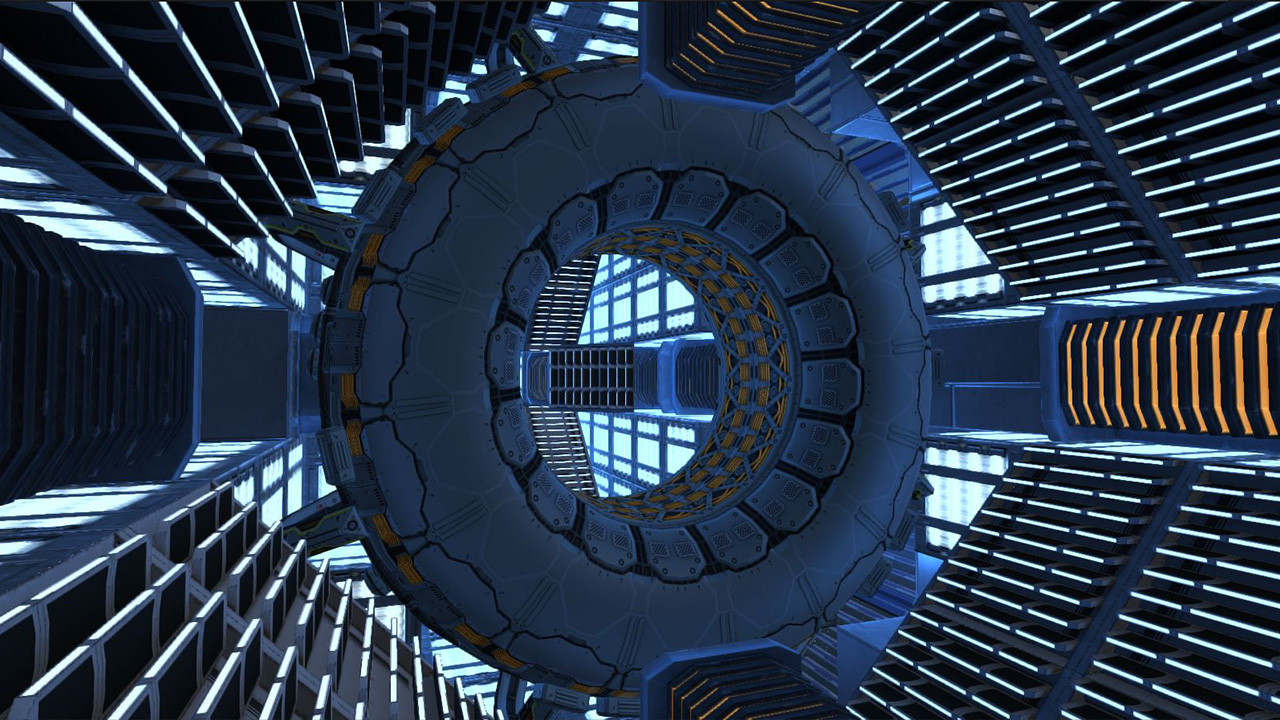 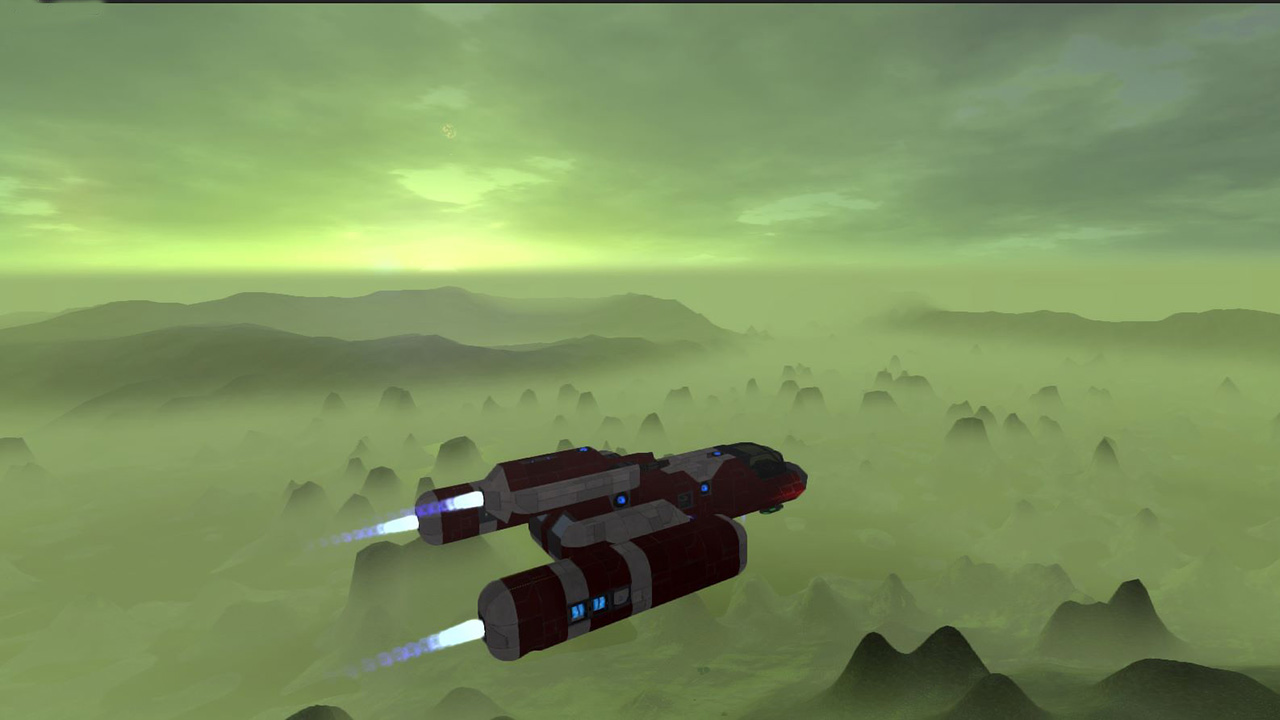