In a shocking twist of events, the JRPG with Platformer roots and switchable leaders adopts Stealth Gameplay mechanics which affect both platforming and battling. And unlike other stealth games, you'll be seeing the power behind the Hunts, Queen Demeter, with her own set of emotions… which could lead to fiercer hunts… or no hunt at all!

I've been stuck in the Underworld once more, but this time, I've learned something important regarding the direction of the game.

While I was stuck in the Underworld of real life (IRL Work), I’ve had time to reflect on small but cumulative issues I’ve collected from the 1st version of the private demo, alongside some concerns regarding the core of the gameplay itself (and the demo’s showcase).

I realized that this whole time, I was trying to advertize essentially the maths of the game rather than the heart and soul of the gameplay, the sensation one would get playing the game.

In addition, one of the problems that I’ve discovered was the lack of engagement I’ve had when platforming on the field: the only time you’d care would be when enemies would spawn, and you’d try to avoid them when possible. Otherwise, the levels would feel barren, not helped by the almost maze-like level design with an “all paths lead to Rome” mentally I had (and huge un-segmented levels causing performance loss).

So… I took a look at the story of the game, and something struck me… Persephone isn’t the hero who would be slaying foes left right and center without breaking a sweat, she’d be one who needs to pick their fight wisely or face brutal defeat, and even then, she’d have a hard time. Meanwhile, Demeter is fierce and has control of the land that once was yours, and seeks to eliminate you wherever you hide, meaning you are 24/7 in enemy territory.

Only one genre fit the bill. A genre I am terrible at. But, ideas came swarming, and within less than a month, the majority of it is implemented and (mostly) functional, and in a state I’m genuinely happy about for once. A bit of a feeling of having found the missing ingredient to the cake for it to be great.

And with this, let me introduce you to the… 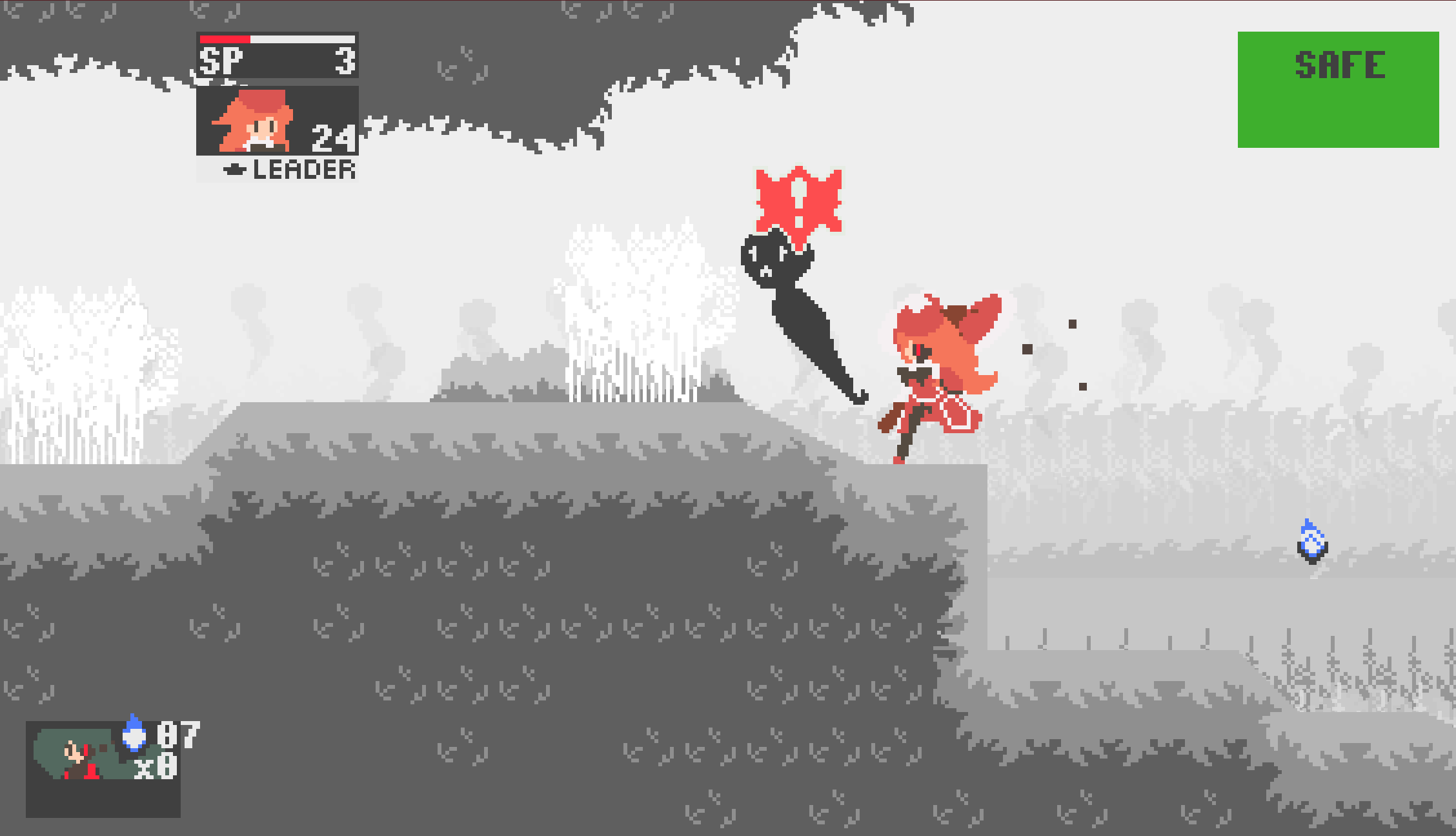 Hegemone Pass is first and foremost a JRPG, and it’s core gameplay still revolves around titles and leader switching. However, there are stealth elements that impact the enemies you’ll be facing. For a lot of these, I’ve taken heavy inspiration from the MGS series of games (and a bit from Deux Ex: Human Revoluton), since their design aligned the most with a JRPG, adding some of my additions and alterations exist. So, let me introduce you to the new elements.

When platforming, you’ll start in the Safe state. If an enemy spots you, the enemy will run away and attempt to reach Demeter. When he successfully runs away, Demeter will call the hunt, where enemies will come out of their homes and start actively hunting you.

Like most stealth games, a timer shows up. But unlike those games, this also serves another purpose: empowering enemy titles. When entering battle, the value of the timer will result in a +% boost to the enemy titles. 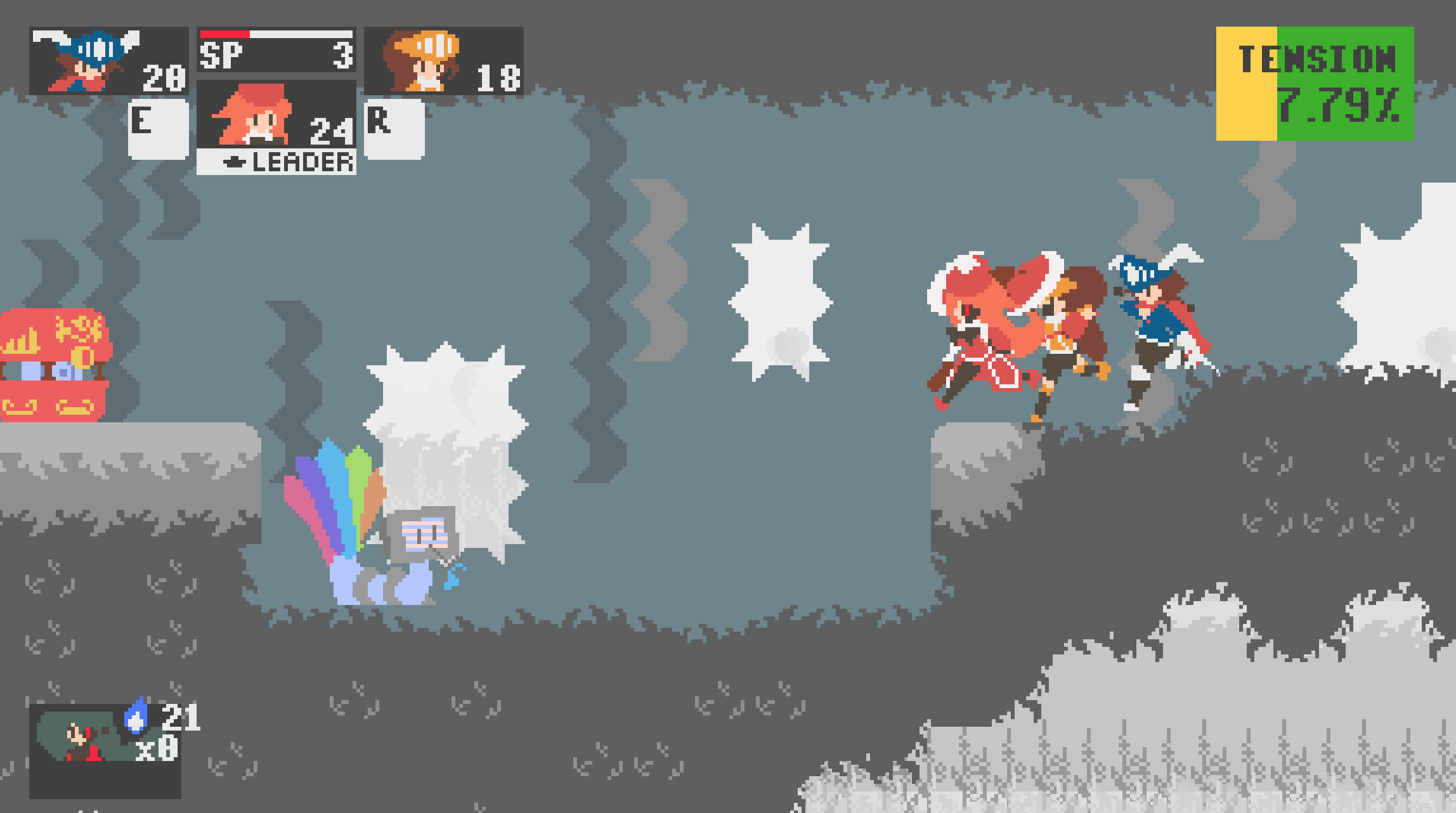 After the Hunted timer runs out, Tension begins: some enemies have returned home, but the others are still on their guard, and still benefit from a small +% boost to their titles. They will spot you faster in this state. After it’s over, it will be Safe again and enemies will not have a power boost anymore.

You’ll get more EXP in battle and undefeated foes give a small amount of EXP when the state is SAFE, but you’ll get more Title Mastery in Hunted.

Considering running away from battle? When it’s SAFE, you’ll always escape without problem. However, during a Hunt or Tension, the timer value is the chance of running away failing: if it’s at 100% or more, you won’t be able to run away at all (well… it’s capped to 90% failure… but why waste precious turns for such a high failure rate?), so make sure you pick your fights wisely… or suffer the consequences.

In other stealth games, the person who handles the alerts and such is rarely, if ever, seen. Over some radio system of sorts. Or just the locals in the streets hearing the commotion and knowing your location.

In Hegemone Pass, Demeter will show up in the corner of the screen for a small amount of time, reflecting her mood when you’ve got caught, alongside the enemy who spotted you warning her of your presence in the area, asking for more power from her.

For a majority of the time, she’ll issue the Hunt. But based on her mood at the moment (or if she’s busy doing something else), the properties of the hunt will be slightly different. Some of them are random while others occur when specific actions are done. Here’s a few examples:

However, that’s only one aspect. The second aspect is enemy competence. Should you be competent enough to defeat enemies stealthily, negating damage, hitting weaknesses… or just brute-forcing your way through enemies during the Hunt, and that enemies are hitting resistances, being unable to act, falling in pitfalls or your traps, etc… Demeter will start to doubt the competence of the inhabitants in the surrounding area, being a waste of her energy. Push her a bit more, and… 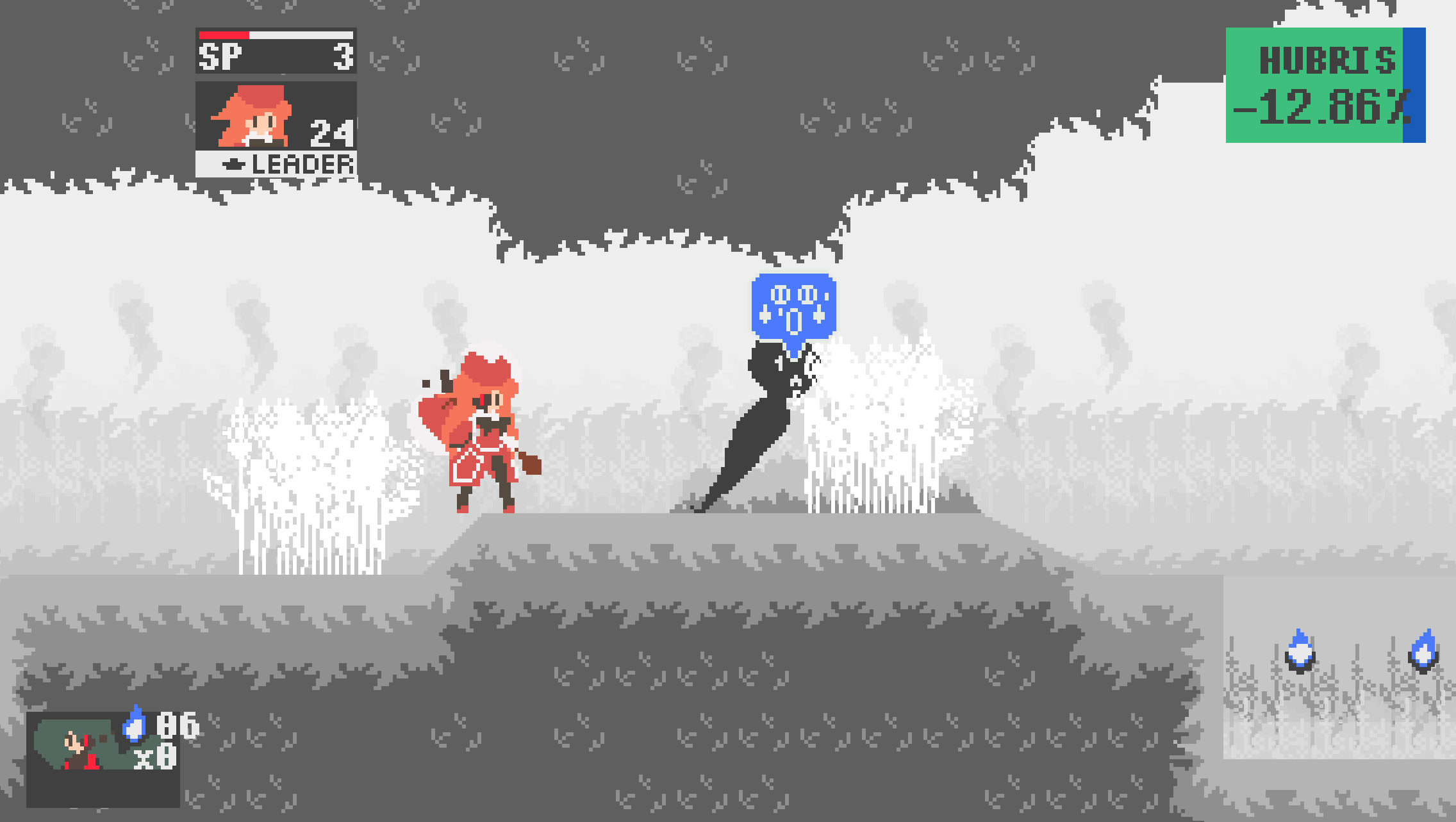 …Demeter will throw the towel for a bit of time, leaving the enemies without a Hegemone to power their titles (and therefore no leader)! Therefore, the enemy team will not be able to utilize their titles!

They’ll also be weaker than usual… and will grant much more EXP and items! (Title Mastery, however, is harder to obtain, and you cannot find Stolen Titles during this time.)

The timer is in the negatives, climbing back up to 0%, back to being Safe. During this time, enemies on the field that spot you will flee and dissapear if not attacked. In battle, you’ll also be forced to eliminate all foes, since they have no leader… Other than that, the timer’s value is purely a timer in this state.

Once it’s over, the area will be deserted for a small bit of time before enemies reappear.

However, be aware that Demeter will underestimate you less if you enter the Hubris state: for every time you enter this state, the Hunted timer’s starting value permanently increases by 10% (value not final, it gets capped depending on difficulty)! 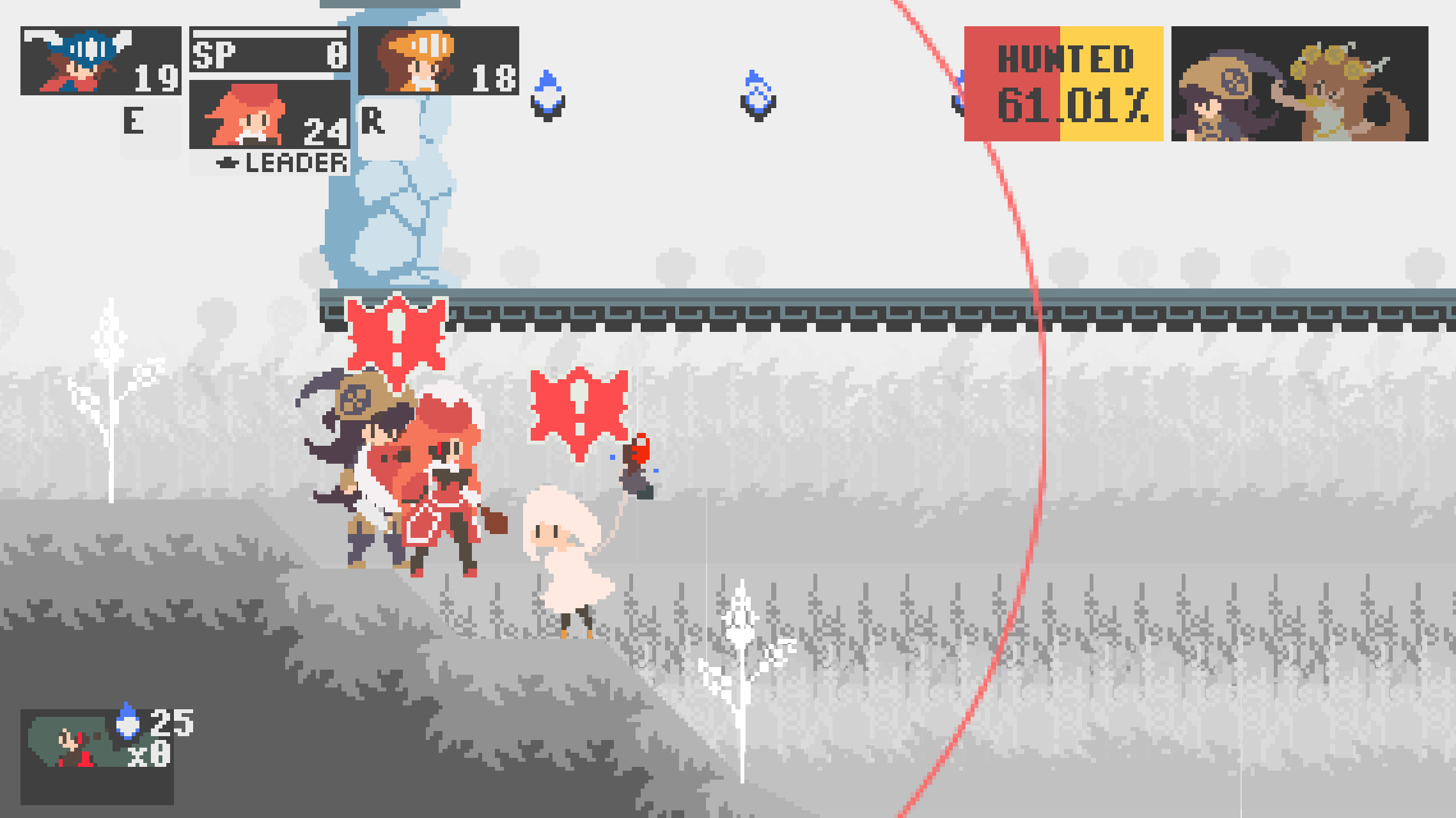 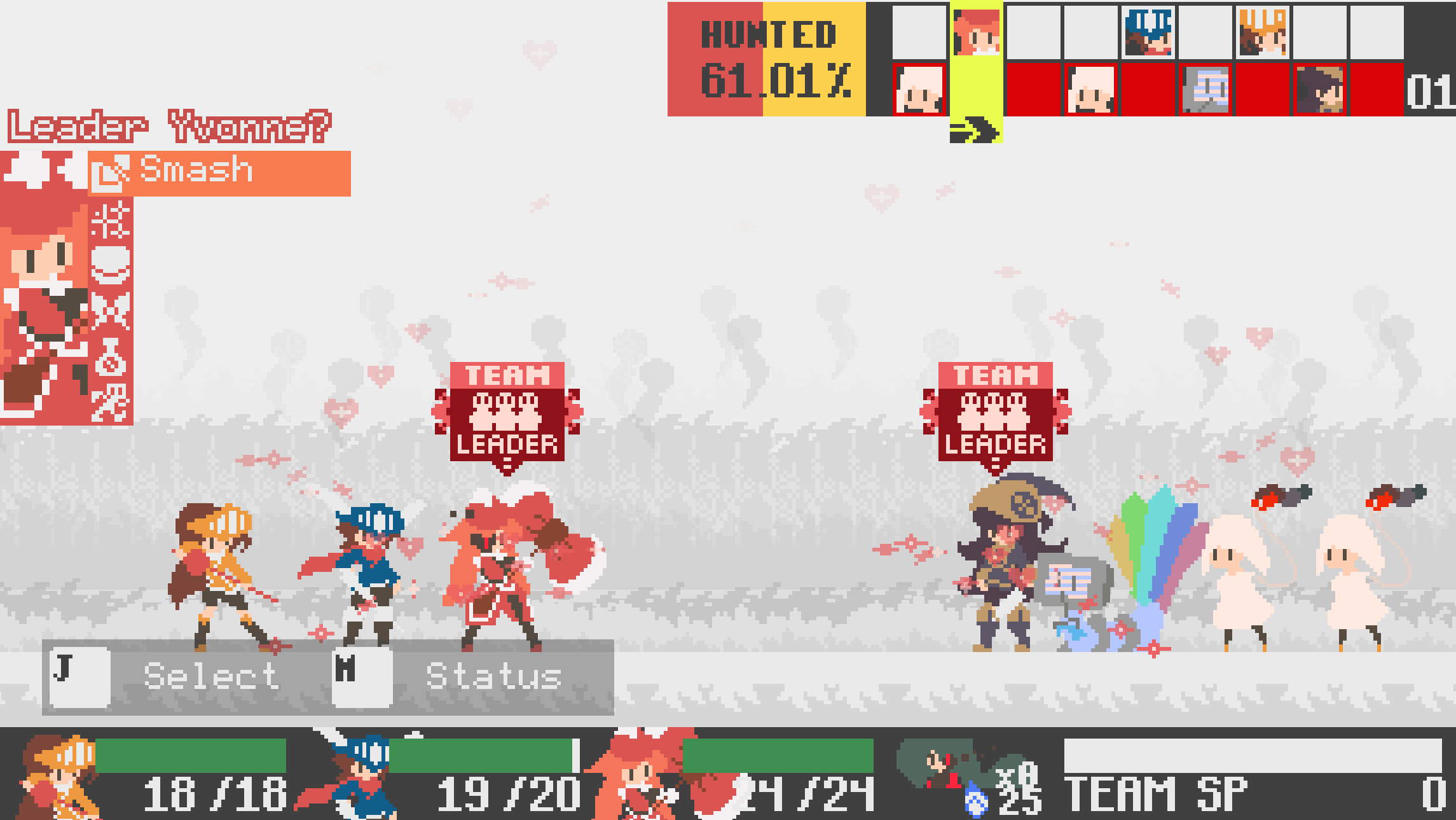 When entering in battle, it’s best that you approach isolated enemies on the field. Otherwise, nearby enemies will join in the fight! And it doesn’t end there! 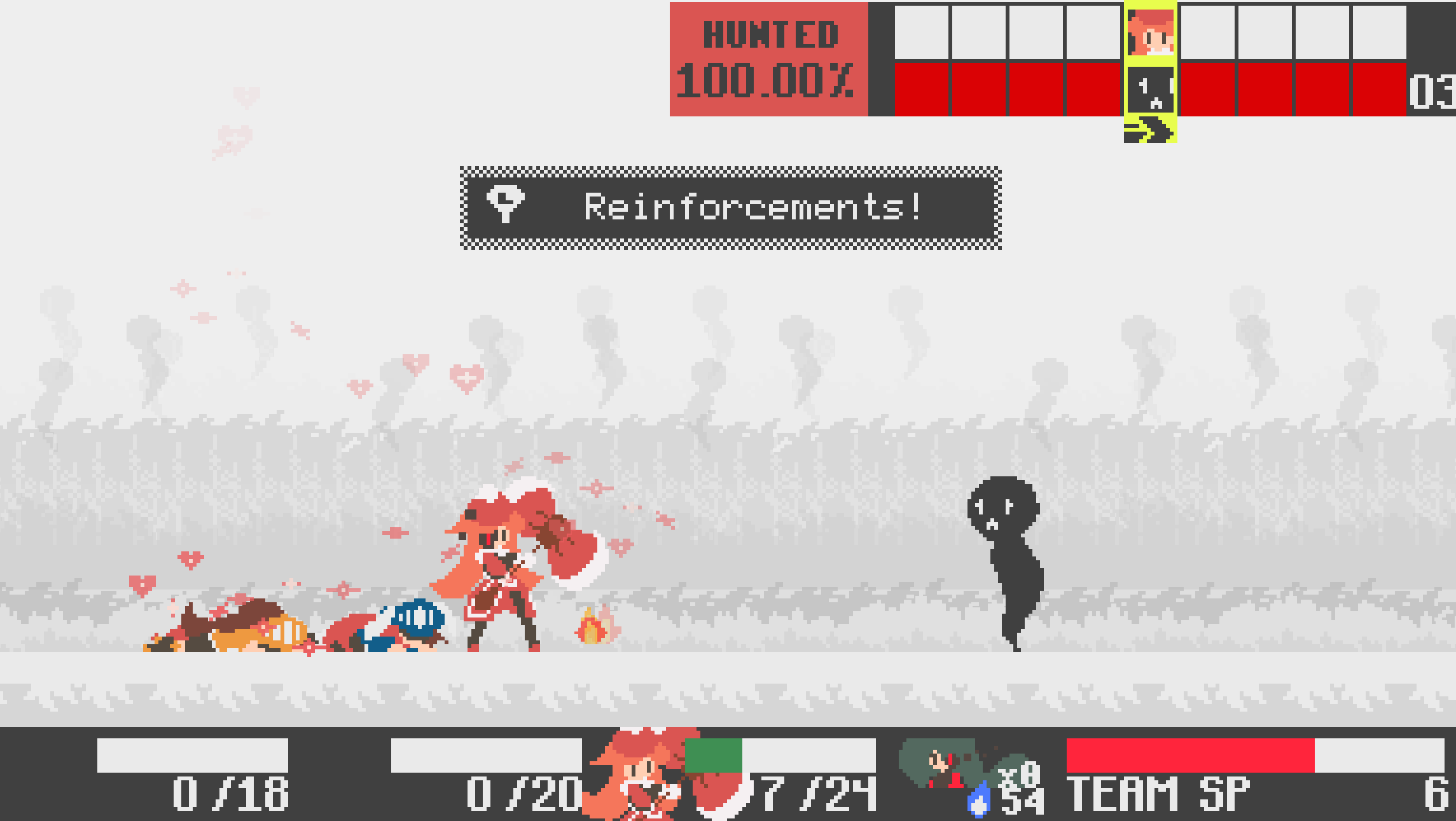 A second wave can occur if enough enemies are present!

For both waves, defeating the enemy leader does make their allies flee.

This happens much more often with the Hunted state, as many enemies will attempt to eliminate you. In the battle transition, a ring (graphics not final) will show the range where additional enemies can jump in that battle. 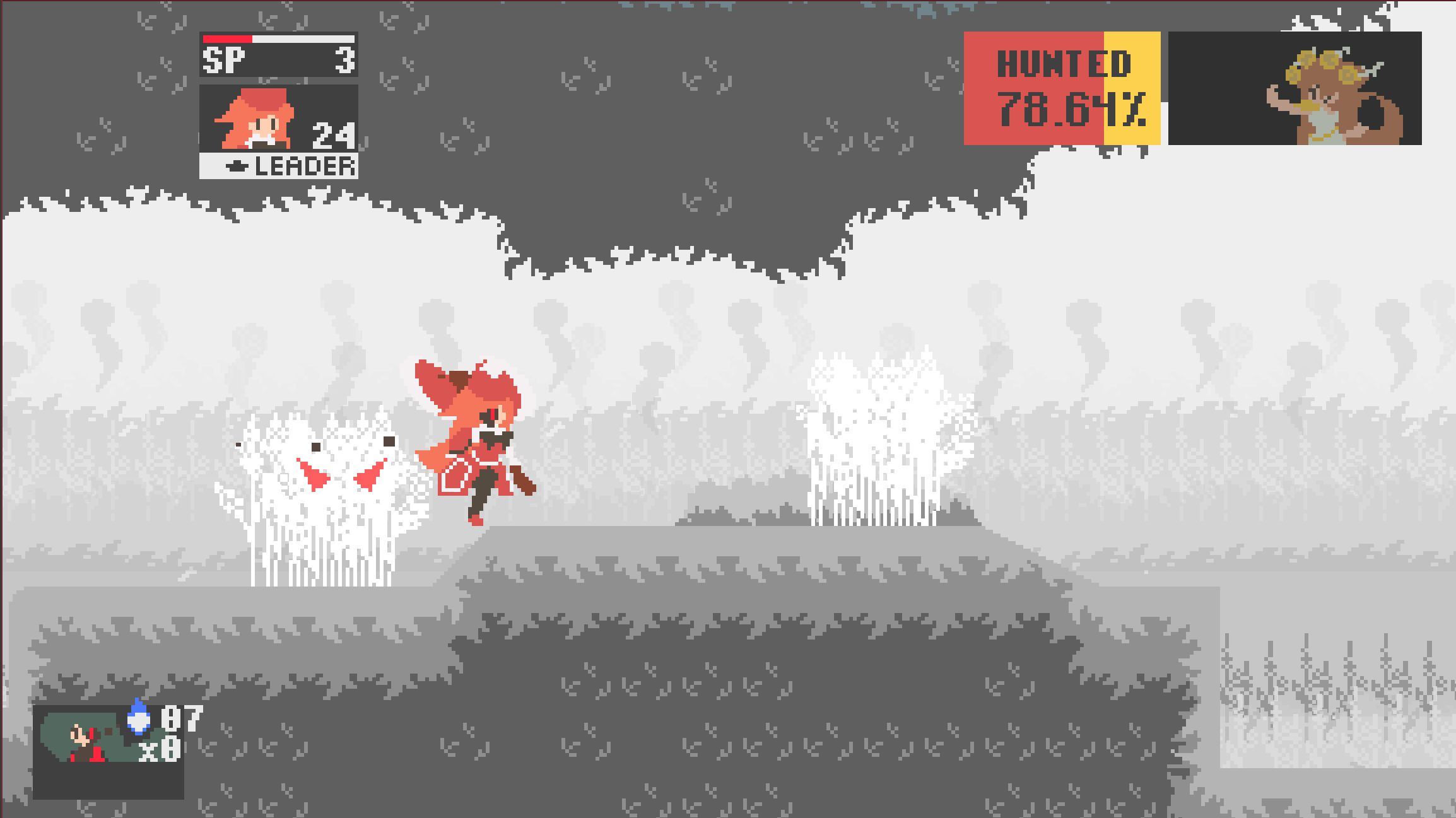 Enemies in Hunted and Tension will pop out of bushes, housing, etc… Keep an eye for glowing eyes, as they’ll pop out there. Sometimes, they’ll wait for you to approach, and will wait, making you think it’s safe… Then they’ll come out to strike! When the state is Safe, the only enemies you’ll need to worry about are those already on the field.

You can now move the camera manually with the arrow keys at any point or state to push to a certain extent the camera to anywhere you want. Letting go will reset the position back to your location. You can use this to check on your surroundings for foes or treasure. The keybinds can be changed on the keyboard/controller rebind screen.

The level design is being revamped in a lot of areas: first of all, we’re cutting down on the absurd amount of alternate paths, to a more reasonable amount: this should help with keeping people from being lost too easily. Second, levels are being cut up into 2-3 rooms from their original version, handy for both helping you stay on the path and for optimization sakes. Lastly, the levels themselves are being reworked in their layout to make sure it works with enemy positions, since, unlike the previous version of the game, where all enemies where on the level at the same time after a set amount of time, only a select few enemies are going to be present at first, unless you’ve been spotted.

There are a few more changes to the game, but we’ll detail them in another post soon. Most notably, there is an updated timeline system that should be more clearer and easier to understand, which hopefully would make better battle sequences... and following allies? How's that going to work in a stealth JRPG? You'll see soon!

I know the game feels like it was in a bit of a state of limbo, but (hopefully) things are moving at their fastest now (I think)… There are a few major bugs I’d like to fix first before releasing a test demo. This time, the demo will not require an email and be publicly available as a testing demo, so that I can gather more feedback, especially with the new stealth systems.