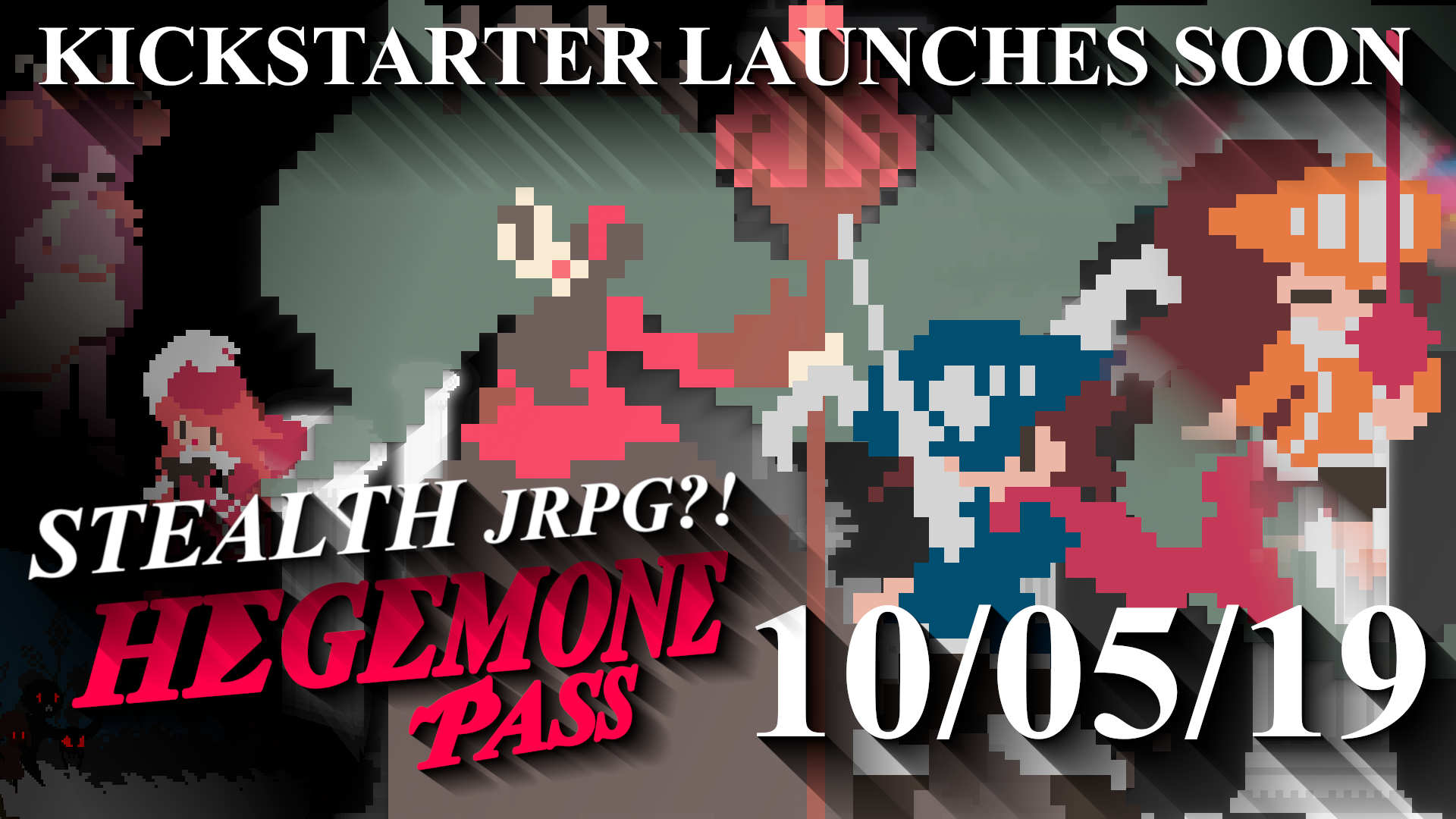 Hegemone Pass is a turn-based RPG with switchable leaders, who in battle use their title’s influence (a collection of stat boosts, resistances, and a passive effect) over allies or foes, featuring platforming gameplay while exploring various missions. Both sides of battle have a leader, victory goes to the party who defeated their opponent’s leader. Both sides can switch the status of leader from one character to another during battle on to activate their title’s influence over the battlefield.

The goddess Demeter has taken over the Underworld! The former Queen of the Underworld Persephone had her title stolen! Now she's being hunted by Demeter, who orders the entire Underworld to capture Persephone, in order to harness Persephone’s hidden secret and become the supreme ruler of humanity and rule over the Pantheon, the home of the gods!

While in hiding, a distress summoning of Persephone occurs! Temporarily escaping from the Underworld, Persephone manages to save three humans from the Surface from an invasion of the Empire, Yvonne, Ethan and Emilie, members of the barbaric tribes of Icaune.

For having saved their lives, Persephone asks in exchange for their help to help her reclaim her title and retake control of the Underworld, bycollecting the five Order Flowers in order to weaken and defeat Demeter.

Persephone
Former Queen of the Underworld.

Yvonne
Next in-line for the leadership of the Hardiesse tribe.

Ethan
A student of the Savoir tribe, brother to Emilie.

Emilie
A soldier of the Savoir Tribe and sister to Ethan.

Demeter
Goddess of Harvest and Life, and currently the Queen of the Underworld. 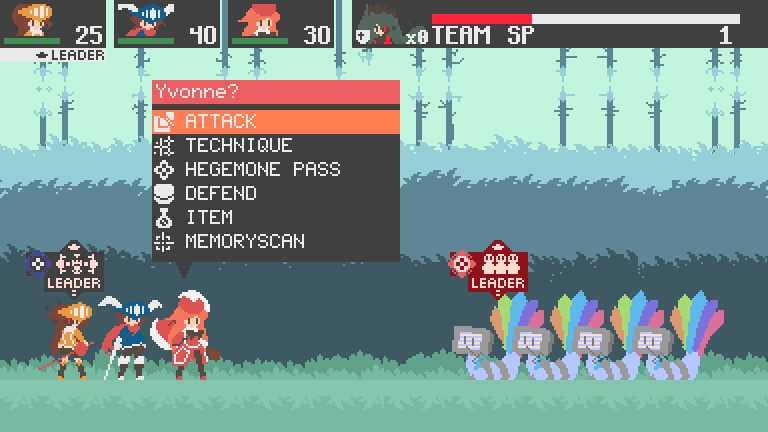 The battle system uses a classic turn-based RPG system. And so, you choose your party’s actions before they act, with speed being a determining factor in who goes first.

Unlike most RPGs though, your party uses a shared pool of SP (Spirit Points). SP is used for performing certain techniques and magic spells of all sorts. SP regenerates every turn, with each conscious ally contributing a certain amount of SP per turn.

You gain EXP from defeated foes, whilst undefeated foes give less EXP if the enemy leader is defeated before his allies.
Your party shares the same exp bar and, as a result, levels up at the same time.

In addition, you can scan your foes with the “Memory Scan” command, which enables you to register the enemy’s entry in your encyclopedia. This allows you to see the enemy’s description, weaknesses and enables the display of the enemy’s current health in battle. 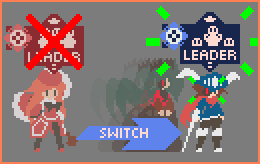 In battle, each side of battle has a single designated leader (On the player's side, the current leader will have a miasma eye, similar to Persephone's miasma eye, when they are leader). The goal in battle is to defeat the enemy team leader, while simultaneously trying to keep yours alive. When a unit is leader, they manifest their Title over others!

Every unit possesses a Title, a manifestation of their influence over others. Titles possess numerous advantages that differ from one another, including :

The effects of a title only manifest when one is the designated leader.
Any leader can pass their leader status to another unit using the “Hegemone Pass” command. Once that unit becomes the leader, their title’s influence overwrites their predecessor’s and it’s own effects come into play.

Titles are classified according to whom the title will influence once the unit becomes the leader. These four categories are: 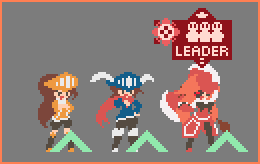 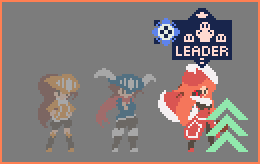 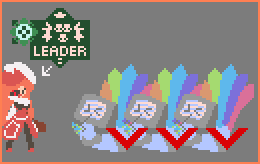 FEAR TITLE
Imposes moderate stat decreases to the enemy team. Does not change their elemental resistances. 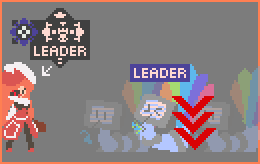 TARGET TITLE
Provides major stat decreases to the enemy leader. Does not change their elemental resistances.

There are also techniques that force your team to change their leader, that can be used by ally or foe alike. Also, certain techniques and status effects have different properties if the target is a leader. 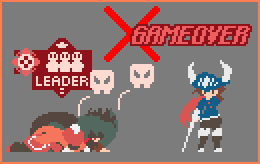 If your leader is defeated, it’s game over. But, there are some safeguards in play:

As long as your current leader isn’t KO’ed, the battle goes on. 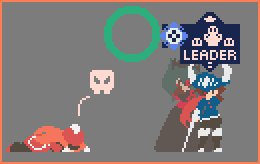 The game is divided into chapters, and each chapter has missions to complete. Missions send you to a level with an objective to complete. 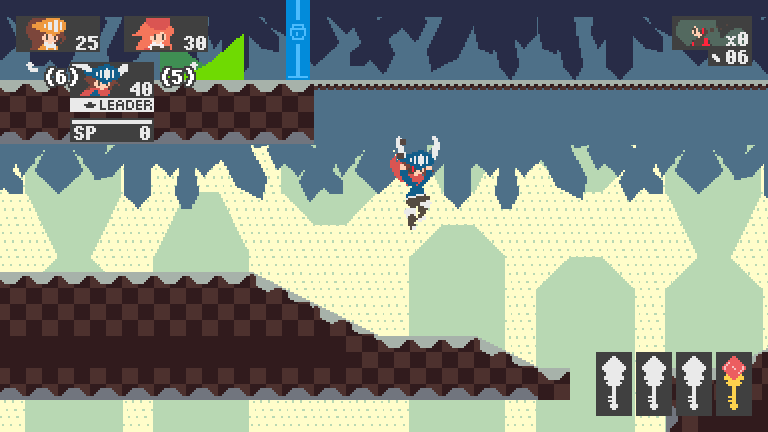 In a mission, you take control of the current leader and will be exploring the level which house various obstacles, while being able to switch leaders on the fly to use their different abilities. And throughout the level, you will find treasure chests containing various kinds of items, and small collectibles used for extra 1UPs available during battle. 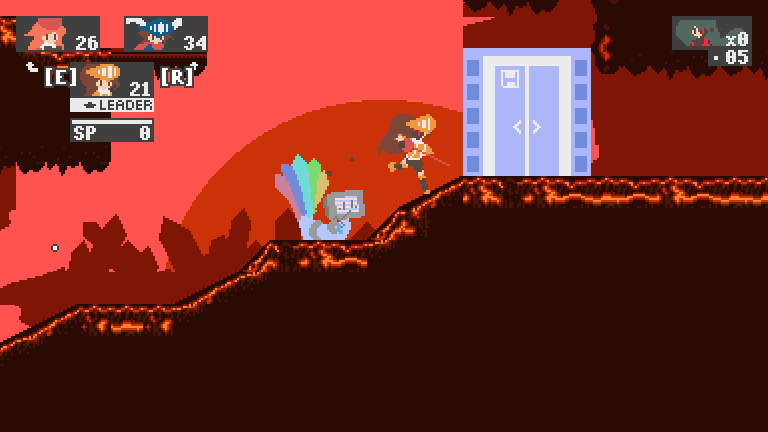 Enemy encounters are represented on the field. And if you enter their field of vision, they will chase you until you run far enough, or enter battle with them. When in contact with the enemy, you will be sent into battle, but you can get a “first strike” if you hit the enemy with your weapon on the field. 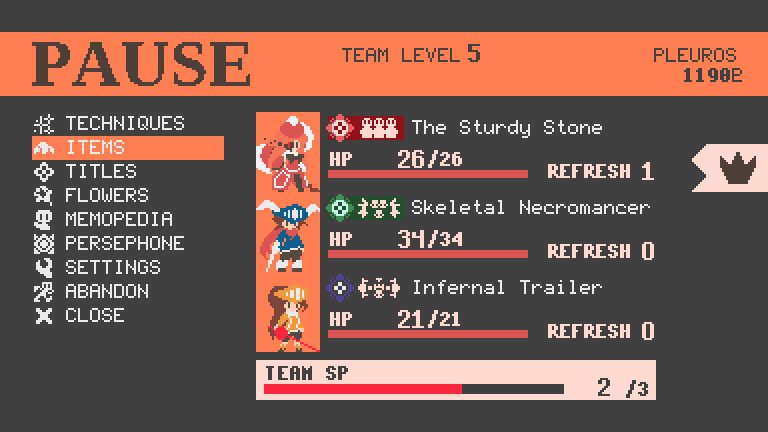 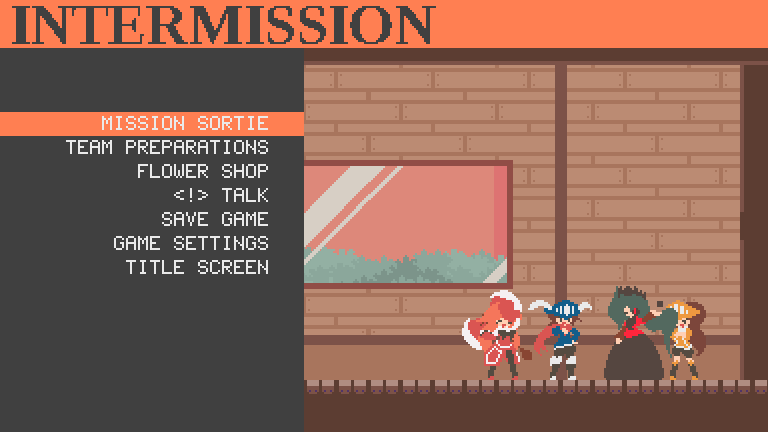 In between missions, you will go to the Intermission.
In the Intermission, you can buy items and equipment in the form of flowers from the Flower Shop, talk with your teammates about various topics, as well as choosing your next mission.

The game is being made with Haxe & HaxeFlixel.

Most of the battle and platforming systems, as well as core mechanics, are done. What’s left to be done is the actual content of the game, with some extra features.

It’s mostly a solo project, I’m handling the programming and doing the pixel art. My brother is helping out by creating a database editor for the content of the game.

All pictures shown above are not necessarily representative of the final product. If you want to see more regular but unfinished progress, you can have a look at my Twitter profile, where I post gifs.

The Hegemone Pass Kickstarter is live! And a major v1.0 update to the demo has been released!

(Edit: We have been updating the Kickstarter page: reorganizing it, converting certain GIFs into PNGs… We'll continue to update the page to better explain what our game's about. If you have any feedback of any kind, even harsh, please contact us. Thank you for your support.)

You'll be able to help us out with the future development of the game. If you like what you're seeing, please, help us out!

If successful, this will allow us to finish the game within a year's time and fund the music for the game. We'll be working full-time on the project should this succeed.

In addition, the very first stretch reward is to make a Nintendo Switch port. We're initiating talks at the moment to become eligible for Switch development, but showing public support will be helpful.

Hegemone Pass is the first of a new genre called the Stealth JRPG. Blending platforming, stealth based gameplay and turn-based RPGs, you'll play as the goddess Persephone, Queen of the Underworld, on her quest to retrieve her title and throne from her mother, the goddess Demeter, who has now taken over the Underworld and seeks to free all the souls.

Powerless, you do have one last power: the power of a Hegemone, which allows you to make any mortal a Leader, activating their title and enhancing stats, resistances and a special effect. These titles can either affect allies or foes. But careful, your foes have a leader too! To win battles, just eliminate their leader!

But beware! If you get spotted, the enemy will pray for help, and enemies (your citizens, by the way) will come out and swarm you! Their titles get boosted in battle during a Hunt, based on how much time is left (the more time is left, the more dangerous each battle becomes).

Filled with cutscenes, charming characters, a unique story, and a setting rarely seen in such a cute way, you'll be delighted to experience

But, no need to explain more, you can try out our demo! 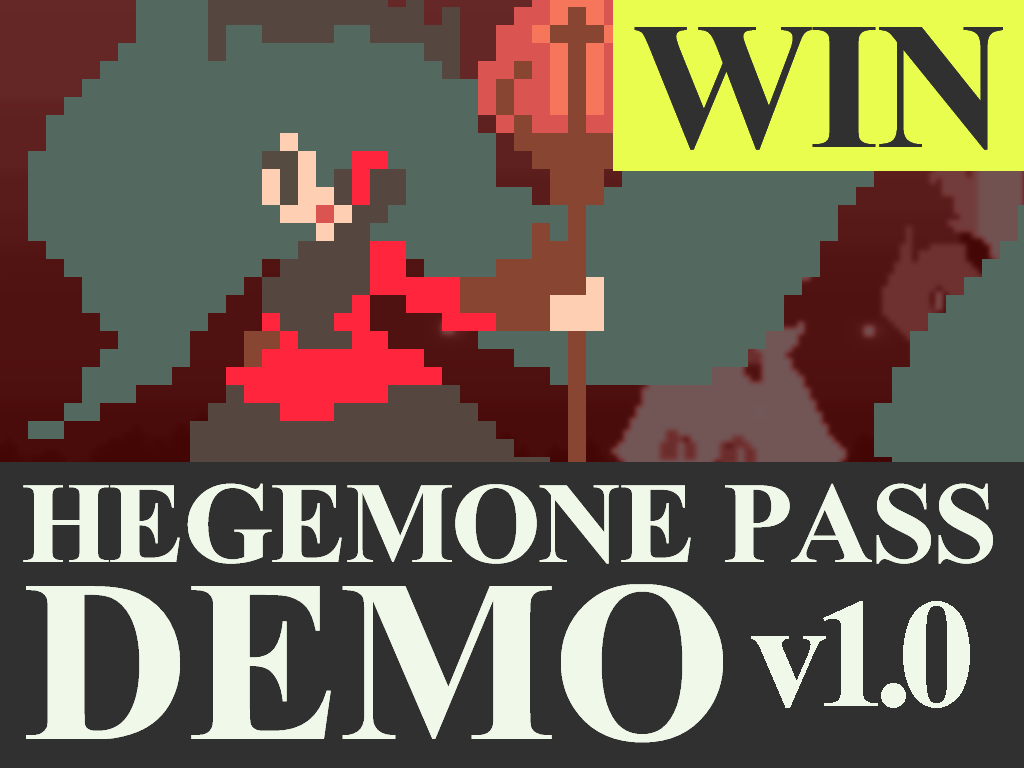 In addition to the launch of the Kickstarter, we have just released a major update to the Hegemone Pass demo, version 1.0. There are many balance fixes, AI improvements, the script has been rewritten, more starting moves, a few bug fixes, and much more!

We suggest you check out the Patch Notes, and try the demo once again. It shouldn't be as brutal as before, especially with access to a healing spell and a revive spell.

Fetch the demo here on indieDB!

For helping us out, we'll be giving out pledge rewards. For any pledge (1€ and above), you'll be engraved in the Credits of the game. For 10€, you'll get the PC Digital Version, and from 15€ upwards, you'll get a Digital Version, which you can choose for either PC or Nintendo Switch (if stretch goal is reached).

You might have noticed our personal website (hegemonepass.com) has gotten one more makeover. It's much more minor than last time… hold on, I still need to put the correct screenshots down there.

Hegemone Pass - Kickstarter on May 11th!

Try the Stealth JRPG set in the Greek Underworld for yourself with the v0.9 demo! As the Kickstarter looms over the horizon, Meringue Entertainment is...

A Public Demo and a Kickstarter are in the works! There also many changes not mentioned yet in the game… up until today! A Timeline system update, Sync-Telepathy...

In a shocking twist of events, the JRPG with Platformer roots and switchable leaders adopts Stealth Gameplay mechanics which affect both platforming and...

This is the Hegemone Pass demo v1.0 for Linux 64. It's meant for the Kickstarter.

Release version for the Kickstarter campaign, with a huge amount of updates and fixes!

v0.91 fixes a door bug and condenses a few tutorials.